Defending the Christian Worldview, Creationism, and Intelligent Design » Young and old earth Creationism » Evidence that all animal species on Earth today emerged about the same time as humans.

Evidence that all animal species on Earth today emerged about the same time as humans.

Evidence that all animal species on Earth today emerged about the same time as humans. Thu Jul 30, 2020 5:25 pm

Mark Stoeckle of Rockefeller University and David Thaler of Basel University recently published a very interesting study based on an extensive analysis of over 100,000 species (“Why should mitochondria define species?”, Human Evolution, 2018).  What they found shocked them. Their data showed that almost all animal species on Earth today emerged about the same time as humans. 1

Why should mitochondria define species? (1-30) - 2018
Several convergent lines of evidence show that mitochondrial diversity in modern humans follows from sequence uniformity followed by the accumulation of largely neutral diversity during a population expansion that began approximately 100,000 years ago. A straightforward hypothesis is that the extant populations of almost all animal species have arrived at a similar result consequent to a similar process of expansion from mitochondrial uniformity within the last one to several hundred thousand years. 3

This study was based on the analysis of genetic differences within mitochondrial DNA of different species of animals.  Unlike the genes in nuclear DNA, which can differ greatly from species to species, all animals have the same set of mitochondrial DNA, providing a common basis for comparison.  The genetic sequences within the mitochondrial DNA can be neutral with respect to function.  So, counting up the number of neutral mutational differences can be used as a clock to calculate elapsed time (given that one can determine the average mutation rate).

What is surprising here, from an evolutionary perspective anyway, is that almost all animal species have around the same number of these neutral mitochondrial mutations within their individual populations.  And, the mutation rate based on phylogenic evolutionary relationships suggests that all of these tens of thousands of different species, including humans, came into existence between 100,000 and 200,000 years ago.  This, by itself, is rather shocking from the Darwinian perspective.  And, that’s not all.  Most of these species where extremely isolated from each other, genetically, in “sequence space” with very clear genetic boundaries and nothing in between.

At some point what we have are distinct “kinds” of animals with very clear genetic boundaries all coming into existence at the same time !! All this is starting to sound rather designed or even Biblical… but what about the hundreds of thousands of years?

Eventually, however, scientists who study known historical families and their genetic histories (or pedigrees), started questioning the mutation rates that were based on evolutionary phylogenetic assumptions. These scientists were “stunned” to find that the mutation rate was in fact much higher than previously thought. In fact it was about 20 times higher at around one mutation every 25 to 40 generations (about 500 to 800 years for humans). It seems that in this section of the control region for mtDNA, which has about 610 base pairs, humans typically differ from one another by about 18 mutations. By simple mathematics, it follows that modern humans share a common ancestor some 300 generations back in time. If one assumes a typical generation time of about 20 years, this places the date of the common ancestor at around 6,000 years before present. But how could this be?!

Thomas Parsons seemed just as mystified. Consider his following comments published April of 1997, in the journal Nature Genetics:
A high observed substitution rate in the human mitochondrial DNA control region, Nature Genetics vol. 15, April 1997, pp. 363-367
https://sci-hub.tw/https://www.nature.com/articles/ng0497-363
Our observation of the substitution rate, 2.5/site/Myr, is roughly 20-fold higher than would be predicted from phylogenetic analyses. Using our empirical rate to calibrate the mtDNA molecular clock would result in an age of the mtDNA MRCA of only ~6,500 y.a., clearly incompatible with the known age of modern humans. Even acknowledging that the MRCA of mtDNA may be younger than the MRCA of modern humans, it remains implausible to explain the known geographic distribution of mtDNA sequence variation by human migration that occurred only in the last ~6,500 years.”

More recent direct mtDNA mutation rate studies also seem to confirm the earlier findings by Parsons and others. In an 2001 article published in the American Journal of Human Genetics, Evelyne Heyer et al., presented their findings of the mtDNA mutation rate in deep-rooted French-Canadian pedigrees.
Their findings “Confirmed earlier findings of much greater mutation rates in families than those based on phylogenetic comparisons. . . For the HVI sequences, we obtained 220 generations or 6,600 years, and for the HVII sequences 275 generations or 8,250 years. Although each of these values is associated with a large variance, they both point to ~7,000-8,000 years and, therefore, to the early Neolithic as the time of expansion [mostly northern European in origin] .

So, the most reasonable conclusion here, it would seem, is that this data strongly favors of the claims of the Bible – claims regarding distinct non-overlapping “kinds” of animals that were recently created and which recently survived a severe bottle-neck event in the form of a catastrophic world-wide Noachian Flood that occurred just a few thousand years ago.  The genetic evidence that is currently in hand strongly supports that claim vs. the Darwinian story of origins where animals have existed and evolved continuously on this planet, beginning with a single common ancestor of all living things, over the course of hundreds of millions of years.  That story simply doesn’t predict the genetic evidence that is in hand today.  After all, the “missing links” within the genetic data are even more clear and striking than the missing links in the fossil record that “perplexed” Darwin so… 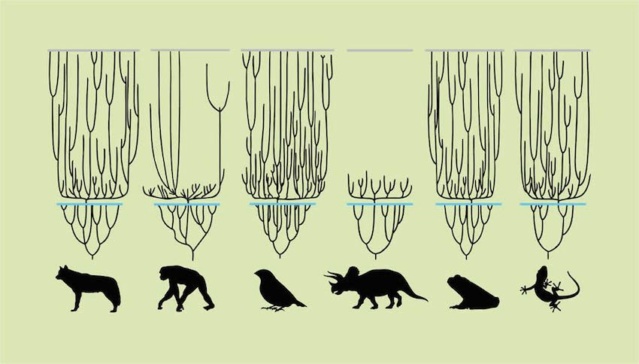 Are all animal species really the same age?
https://toddcwood.blogspot.com/2018/06/are-all-animal-species-really-same-age.html?fbclid=IwAR35tBFBd5qlKGy0O7oz5PK-DJ54_aaSR6Sogxu2WEFfdZrE85zZNUMBIlo

Defending the Christian Worldview, Creationism, and Intelligent Design » Young and old earth Creationism » Evidence that all animal species on Earth today emerged about the same time as humans.

» Animal species overview
» THE 21 COOLEST NEW ANIMAL SPECIES OF 2015
» How to lead with the discrepancy of a young earth described in Genesis, with deep time proposed by science ?
» New Generation Time Data Both Suggest striking evidence of a Unified Young-Earth Creation Model
» Old earth evidence