DK: Darwinian evolution initiated as described in Figure 3 favors development of more complicated forms (i.e.,proto-aaRS) able to specifically interact with additional amino acids, thus assigning new codons.
Reply: This is a hypothesis. A claim. Where is the evidence that the evolution of proto-aaRS is possible or even feasible on prebiotic earth? Why would Darwinian evolution produce such complex proteins prebiotically, if there is no function for them, unless they perform their job in a fully developed translation system?

Claim: Based on Figure 2, we suggest two major periods of code development along with aaRS formation.Pre-LUCA I is the first period where only class II proto-aaRS existed with mostly GC-rich RNA andcharge Gly, Ala, Pro, Thr and Ser by protoforms of GlyRS, AlaRS, ThrRS, ProRS and SerRS. Duringpre-LUCA I, there were only short peptides with few motifs and limited functionality, therefore, for some of the essential functions of ribozymes would be selected.
Reply: How do you go from the hypothesized premise, to a logical follow-up,  to say: therefore..... ?? This seems to me to be made up conjecture, without basis and evidence in the real world. if your proposal is Darwinian Evolution, there would have to be something to select to have an advantage of survival. I see nothing of the sort here.

Claim: The pre-LUCA II period wasestablished after the fidelity of the RNA-replication peptide was enhanced to incorporate efficientlyA and U bases during the first enzymatic RNA replication.
Reply:  Here, again, you write about a hypothesized scenario, which exists in your ideas. Where is the scientific evidence as premise to make up such claims ?

On a side note about aaRS:

Error detection and repair during the biogenesis & maturation of the ribosome, tRNA's, Aminoacyl-tRNA synthetases, and translation: by chance, or design?
https://reasonandscience.catsboard.com/t2984-error-check-and-repair-during-messengerrna-translation-in-the-ribosome-by-chance-or-design

Question: In order to check and repair errors, you need knowledge of the correct, and the wrong state of affairs. How could this knowledge have emerged by non-intelligent mechanisms?

Furthermore: How do you explain the Intra-protein signalling channels in Aminoacyl-tRNA synthetase that are essential in translation ???
https://reasonandscience.catsboard.com/t2061p200-my-articles#6788
INTRAPROTEIN communication channels signal from one allosteric binding site where codon recognition takes place, to the other where after recognition, the right amino acid is selected, to be attached afterwards to the tRNA, which transfers it in the next step to the assembly site in the Ribosome, where the condensation reaction takes place, the amino acids is attached and protein polypeptide elongation takes place. 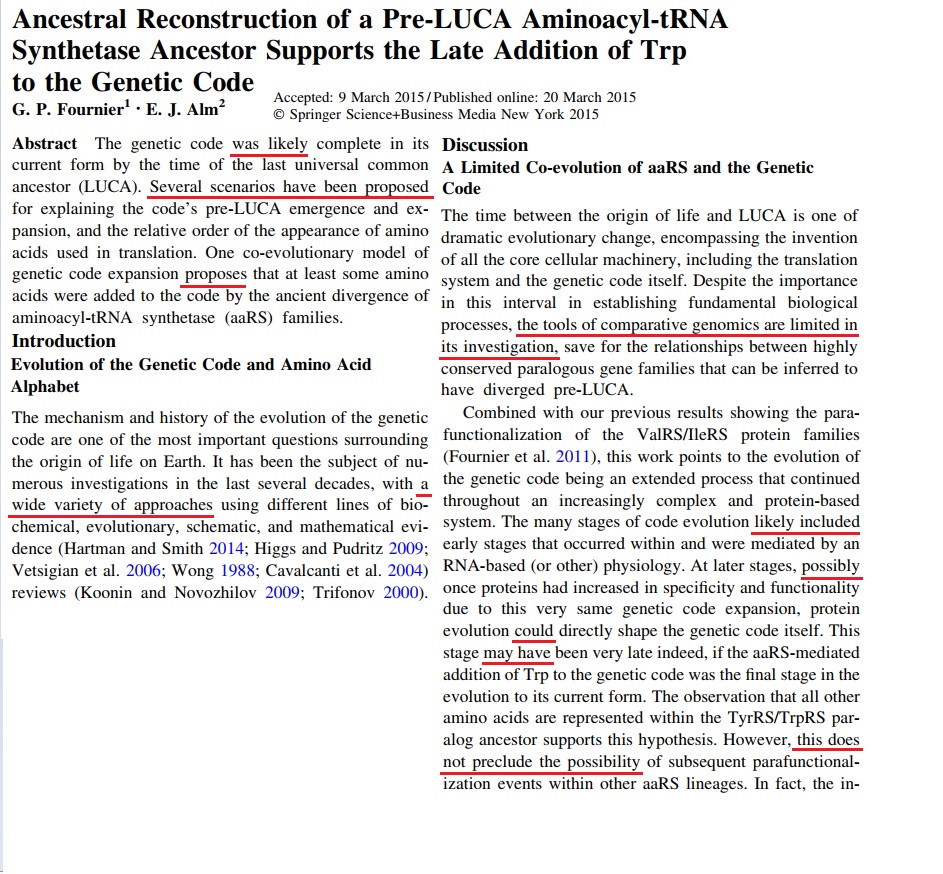 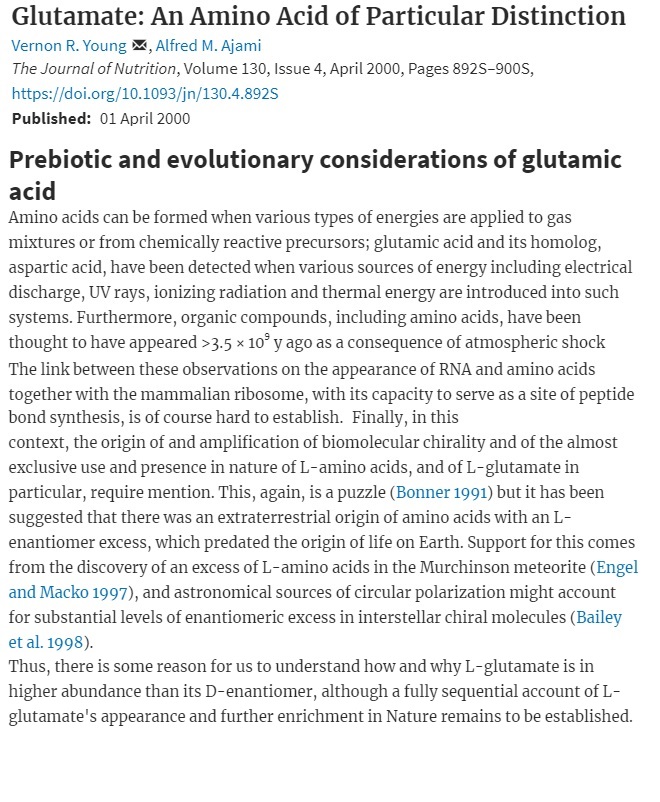 Posts : 6079
Join date : 2009-08-09
Age : 54
Location : Aracaju brazil
The direct acylation of tRNA by aminoacyl-tRNA synthetases is well understood; the ATP-dependent reaction  is carried out by enzymes which, in general, are exceedingly specific in selecting their substrates, i.e., amino acid and tRNA.

The assumption that translationally produced protein was a part of the very first translation mechanism raises the chicken-and-egg paradox. However, there can be little doubt that once translation did exist, proteins that facilitated tRNA charging would be among the first proteins to evolve, the selective advantage of their specificity being great. Thus, the evolutionary history of the current aminoacyl-tRNA synthetases must go deep into translation's past, to the emergence of the modern genetic code. The central role played by the AARSs in translation would suggest that their histories and that of the genetic code are somehow intertwined. This then raises the question of whether the AARSs in their evolution have contributed to the code's present structure; put another way, are the codon assignments simply reflections of AARS evolutionary wanderings? It is important that conjectures of this sort be examined in detail

In an evolutionary sense, the most striking thing about the synthetases is the existence of the two distinct classes. Common characteristic domain structures and sequence homologies define each class, but the two have nothing in common except the biochemistry of the reactions they catalyze: between the two classes, proteins show no structural resemblance, have almost no common motifs (see reference 49 for a possible exception), encounter the tRNA from different angles, and acylate the amino acid to different hydroxyl groups of the terminal ribose of the tRNA. This has been widely assumed to suggest that the tRNA-charging function evolved at least twice.

My comment: These enzymes are LIFE ESSENTIAL, and had to be fully set up to do their job when life started. So pondering here about how evolution did it is preposterous and inadequate. There were no evolutionary driving forces at this stage.

Posts : 6079
Join date : 2009-08-09
Age : 54
Location : Aracaju brazil
Aminoacyl-tRNA synthetases use editing
Correct aminoacylation depends on the selection of two appropriate substrates, the tRNA and the amino acid, by the corresponding aminoacyl-tRNA synthetase. tRNA selection itself appears not to present a major challenge, as tRNAs are big enough to contain a large number of ‘identity elements’, or determinants, for specific interactions. Amino acids, however, are smaller and must be distinguished solely by the nature of their side-chains. Although there are substantial chemical differences among most amino acids, the very similar chemical and/or structural properties of some make them difficult to distinguish. As a specific example, threonyl-tRNA synthetase must discriminate threonine from the isosteric valine and from serine, which is smaller but has a γ-hydroxyl group like threonine.

How do synthetases deal with this? The aminoacylation reaction, which takes place at a site of the enzyme called the synthetic site, occurs in two steps. First the amino acid is activated by adenylation (consuming ATP) and then it is transferred to the tRNA (releasing AMP). Steric exclusion of amino acids with larger side-chains and recognition of specific properties of each amino acid generally make this synthetic site specific enough so that only the correct amino acid can be activated and transferred. But amino acids having similar properties to and a smaller size than the cognate amino acid can be misactivated at frequencies that are too high to maintain an unambiguous code. As a consequence, enzymes facing this problem have evolved a second active site, distinct from the synthetic site, called the editing site, where misactivated amino acids or misacylated tRNAs are hydrolyzed.
The presence of two catalytic sites with different activities led to the proposal of a ‘double-sieve’ model of fidelity (Figure 2). In this model, the synthetic site of the enzyme acts as the first sieve, excluding amino acids that are too large or that cannot establish specific interactions. For example, threonyl-tRNA synthetase can discard amino acids larger than threonine, based on size. It also discards valine, which is similar in size but lacks the γ-hydroxyl group. Threonyl-tRNA synthetase binds valine significantly more weakly than threonine because a specific interaction between a zinc ion in the active site and the γ-hydroxyl group of threonine does not form when valine is bound. Smaller amino acids that can establish sufficient interactions, however, may slip through this first, coarse sieve and be activated and transferred to the tRNA.

Re: Origin of Aminoacyl tRNA synthetase