Defending the Christian Worlview, Creationism, and Intelligent Design » Astronomy & Cosmology and God » The Stability of the Proton

The Stability of the Proton


Not all types of particles are stable; many of them “decay” or disintegrate after a while into other types of particles. The “half-life” tells how long this typically takes. For example, neutrons have a half-life of about ten minutes. Neutrons usually disintegrate into a proton, an electron, and an anti-neutrino. Fortunately, protons are stable. (At least, it is known that they last much longer than the age of the universe.) That is fortunate because the nucleus of ordinary hydrogen (hydrogen 1) consists of just a proton, and if that were unstable, there would be no ordinary hydrogen in the world. And without hydrogen, there would be no water, no organic molecules, no hydrogen-burning stars like the Sun—in short no possibility of life as we know it. Why isn’t the instability of the neutron equally disastrous, considering that all nuclei except hydrogen 1 contain neutrons? And, for that matter, how can it be that there are neutrons in all those nuclei, like carbon 12 and oxygen 16, if neutrons do last only ten minutes or so? The answer is that whereas an isolated neutron is unstable, a neutron can be quite stable if it is inside an atomic nucleus with other neutrons and protons. The reason for this has to do with a subtle quantum effect called “Fermi energy.” The fact that isolated neutrons are unstable does not matter very much, since isolated neutrons, having no electric charge, do not bind together with electrons to form atoms.

The interesting question is how the universe avoids the disaster—not for it but for us—of protons being unstable. Why is the proton stable and the neutron unstable? The key is that the neutron is a tiny bit heavier than the proton. The mass of a neutron is 939.565 MeV, while the mass of a proton is 938.272 MeV— a difference of only a seventh of a percent. Relativity theory tells us that mass is the same thing as energy, so this is the same as saying that a neutron has a little bit more energy packed inside it than a proton does. Because of that, a neutron can decay into a proton plus some other particles, and release energy in the process. But a proton cannot decay into a neutron because it does not have enough energy to do so. Because a neutron has a little more energy inside it than a proton, extra energy would have to be supplied to a proton to get it to turn into a neutron. If things were the other way, if the proton’s mass were even a fraction of a percent larger than the neutron’s, then neutrons would be stable and protons would be unstable, which means that there would be no hydrogen 1, and we would not be here. 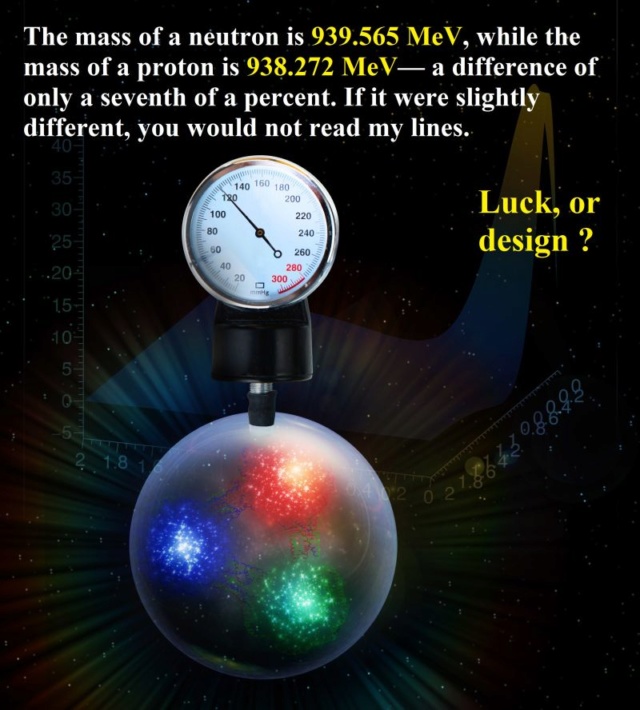 Defending the Christian Worlview, Creationism, and Intelligent Design » Astronomy & Cosmology and God » The Stability of the Proton