Defending the Christian Worlview, Creationism, and Intelligent Design » Philosophy and God » Atheism » Atheism: How to define it

Atheism: How to define it

Claim:  You don't know what Atheism is. Atheism is just about the rejection of the claim of the existence of God because there is no evidence for his existence.
Reply: It truly bores me when atheists think that they have to school me about what atheism is, and entails. You are not the first attempting to do it, be assured about that. I know it probably better than you. Atheists also have a burden of proof. All of us, in attempting to explain the world around us, move from a plethora of questions to a single responsibility:

There Are Only Two Kinds of Answers, In the end, the answers to these questions can be divided into two simple categories: Answers from the perspective of philosophical naturalism (a view held as an atheist), or answers that accept the existence of supernatural forces (a view hold as a theist). Atheists maintain that life’s most important questions can be answered from a purely naturalistic perspective (without the intervention of a supernatural, Divine Being). Theists argue that the evidence often leaves naturalism ‘wanting’ for answers while the intervention of an intelligent, transcendent Creator appears to be the best inference. In times like these, the theist finds it evidentially reasonable to infer a supernatural cause.

Atheism is merely the disbelief in a personal deity. Some atheists (sic) are technically deists, others are agnostics, and yet others a materialists. There are even believers in pan-psychism who think the Cosmos itself is intelligent. At the end of the day, atheist is just a grab-bag term for those who are not theists.

Negative atheism, also called weak atheism and soft atheism is any type of atheism where a person does not believe in the existence of any deities but does not explicitly assert that there are none.1

Positive atheism, also called strong atheism and hard atheism is the form of atheism that additionally asserts that no deities exist

Agnosticism is the view that the existence of God, of the divine or the supernatural, is unknown or unknowable. An agnostic can also be one who holds neither of two opposing positions on a topic. 2

Skepticism (American English) or skepticism is generally any questioning attitude or doubt towards one or more items of putative knowledge or belief. 3

Freethought (or "free thought")is a philosophical viewpoint which holds that positions regarding truth should be formed on the basis of logic, reason, and empiricism, rather than authority, tradition, revelation, or dogma 4

Atheism simply states there is no God: However, the 'belief' in God is logic-based; albeit, fundamentally flawed. Strong atheism requires proof of both the existence and nonexistence of God without contradiction:
Proof of God: In accordance with the infinitesimal calculus (proof) the existence of God is 100%.
Proof of the nonexistence of God: That, is in dealing with the infinitesimal calculus itself, which is God.
In short, the 'creator' is an infinitesimal calculus. Albeit, creator is poor word choice, the calculus cannot do otherwise.
~ There is no such thing as an Atheist (example: there is no such thing as a non-scientist. nor a nonteacher). Although, the term is often used to provoke the antagonist in the non-atheism group.
The purpose of provocation is to solicit a psychodrama enactment. Whereby, the ensuing debates challenge cognitive dissonance in 'both' groups.
The issue regarding 'cognitive dissonance' among the Atheism groups involves affixing the term Atheist to their ego.
The issue regarding cognitive dissonance among atheism groups involves the atheist-identifier, affixed to ego, enacting a self-righteous validation: Whereby, the self-identified 'atheist' expects more from others (proof of God) than they require from themselves (proof of the nonexistence of God); which is an act of intellectual dishonesty. 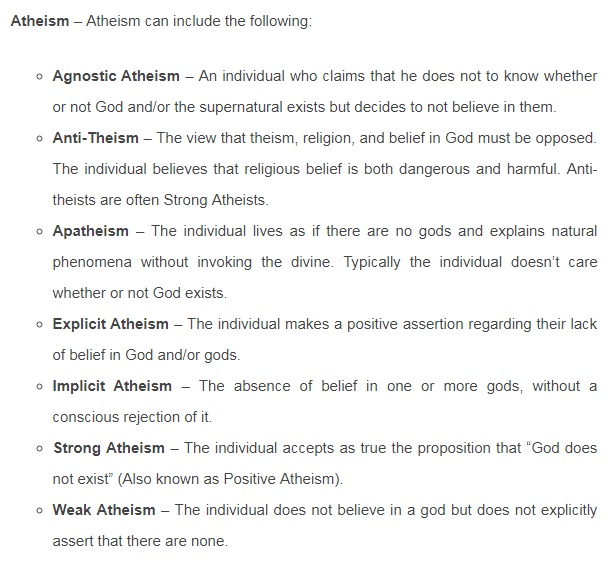 Defending the Christian Worlview, Creationism, and Intelligent Design » Philosophy and God » Atheism » Atheism: How to define it