Morphogenesis involves coordinating cell growth, cell migration, and cell death. Death is a critical part of life. The embryonic cells that constitute the webbing between our toes and fingers die before we are born. So do the cells of our tails. The orifices of our mouth, anus, and reproductive glands all form through apoptosis—the programmed death of certain cells at particular times and places.4

One of the most puzzling phenomena in the development of the nervous system is neuronal cell death. In many parts of the vertebrate central and peripheral nervous systems, more than half the neurons die during the normal course of development. Moreover, there does not seem to be much conservation of apoptosis patterns across species. For example, about 80% of a cat’s retinal ganglion cells die, whereas in the chick retina this figure is only 40%. In fish and amphibian retinas, no ganglion cells appear to die. What causes this programmed cell death? Although we all are constantly poised over life-or-death decisions, this existential dichotomy is exceptionally stark for embryonic cells. Programmed cell death, or apoptosis is a normal part of development. Cell death is essential if our joints are to form and if our fingers are to become separated. The death (or lack of death) of specific cells in the vertebrate limb is genetically programmed.

Development biology textbooks claim that " cell death has been selected over the course of evolution." How could that be, if cell death is essential?

" Of the four principles of multicellular systems, perhaps the least obvious is apoptosis ( Programmed Cell Death). Simply put, the principle is that all of a multicellular organism's cells are prepared to suicide when needed for the benefit of the organism as a whole. They eliminate themselves in a very carefully programmed way so as to minimize damage to the larger organism. " 7

Apoptosis is necessary not only for the proper spacing and orientation of neurons, but also for generating the middle ear space, the vaginal opening in females, and the spaces between our fingers and toes. Apoptosis prunes unneeded structures (e.g., frog tails, male mammary tissue), controls the number of cells in particular tissues (neurons in vertebrates and flies), and sculpts complex organs (palate, retina, digits, heart).

During embryonic development, we constantly make and destroy cells, and we generated about three times as many neurons as we eventually ended up with when we were born.

Someone noted:
"By the time I was born, more of me had died than survived. It was no wonder I cannot remember; during that time I went through brain after brain for nine months, finally contriving the one model that could be human, equipped for language."

In the nematode C. elegans, in which we can count the number of cells as the animal develops, exactly 131 cells die under the normal developmental pattern. All the cells of C. elegans are programmed to die unless they are actively told not to undergo apoptosis.

The body is constantly overturning its cells. Billions of cells are created daily. Red blood cells are constantly being kicked into circulation (and there are millions in a single drop), white cells and platelets are being produced constantly as well. Skin cells slough off the body by the millions daily and they are replaced. Cells that make antibodies reproduce rapidly. The cells lining the digestive tract are also being replaced daily. It’s important to stay healthy and eat right so all the cells that are replaced are healthy. 1

The adult body produces about 100 billion new red blood cells and over 4 million epidermal skin cells per day, and a fertile young man produces about 400 million sperm per day. On the other hand, adults produce essentially no new nerve cells, fat cells, or skeletal muscle cells, or at most only trivial numbers of these cell types. By the end of adolescence, you have essentially all of those cell types you’re ever going to get for the rest of your life.

The mass of cells we lose each year through normal cell death is close to our entire body weight!

The transforming growth factor beta (TGF-β) family is a large group of structurally related cell regulatory proteins.  5
There are more than 30 structurally related members of the TGF-β superfamily, and they regulate some of the most important interactions in development 6 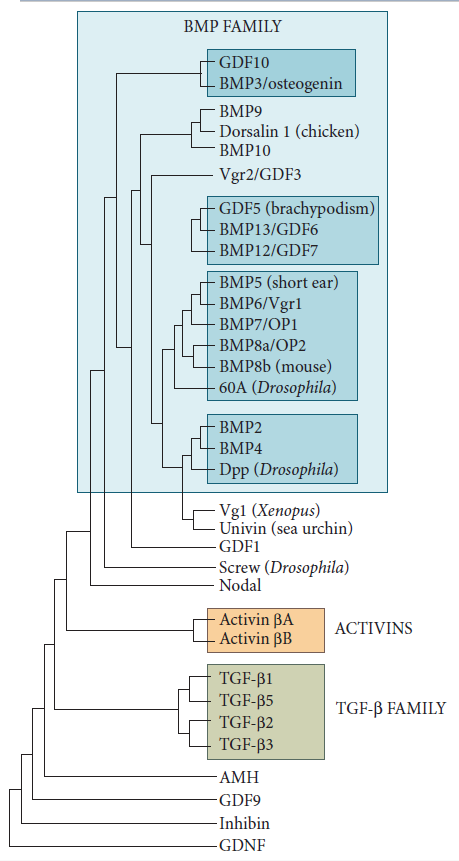 Relationships among members of the TGF-β superfamily

Three of these families are most widely used throughout development: TGF-βs, BMPs and Nodal/Activin. The members of the BMP family (bone morphogenetic proteins) have turned out to be multifunctional;  They have been found to regulate cell division, apoptosis (programmed cell death) cell migration, and differentiation.

Cell death in the limb, mediated by BMPs, is necessary for the formation of digits and joints. Differences between the unwebbed chicken foot and the webbed duck foot can be explained by differences in the expression of Gremlin, a protein that antagonizes BMPs. 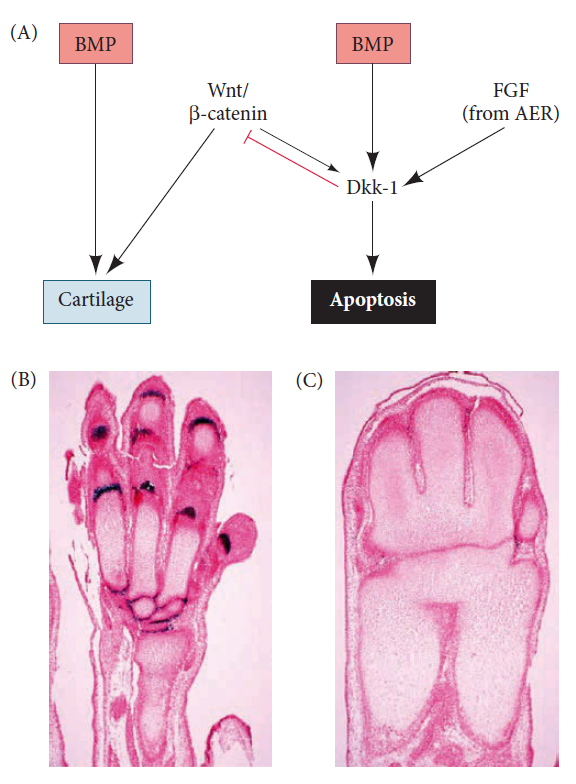 Possible involvement of BMPs in stabilizing cartilage and apoptosis.
(A) Model for the dual role of BMP signals in limb mesodermal cells. BMP can be received in the presence of FGFs (to produce apoptosis) or Wnts (to induce bone). When FGFs from the AER are present, Dickkopf (Dkk) is activated. This protein mediates apoptosis and at the same time inhibits Wnt from aiding in skeleton formation.
(B,C) Effects of Noggin. (B) A 16.5-day autopod from a wild-type mouse, showing Gdf5 expres​sion(dark blue) at the joints.
(C) A 16.5-day Noggin-deficient mutant mouse autopod, showing neither joints nor Gdf5 expression. Presumably, in the absence of Noggin, BMP7 was able to convert nearly all the mesenchyme into cartilage.

Forming the joints
The function first ascribed to BMPs was the formation, not the destruction, of bone and cartilage tissue. In the developing limb, BMPs induce the mesenchymal cells— depending on the stage of development—either to undergo apoptosis or to become cartilage-producing chondrocytes. The same BMPs can induce death or differentiation, depending on the responding cell’s history. This context dependency of signal action is a critical concept in developmental biology. It is also critical for the formation of joints. During early limb bud stages (before cartilage condensation), beads secreting BMP2 or BMP7 cause apoptosis. Two days later, the same beads cause the limb bud cells to form cartilage. In the normally developing limb, BMPs use both of these properties to form joints. Several BMPs are made in the perichondrial cells surrounding the condensing chondrocytes and promote further cartilage formation6 (FIGURE A above). Another BMP, Gdf5, is expressed at the regions between the bones, where joints will form, and appears critical for joint formation (FIGURE B above). Mouse mutations of the gene for Gdf5 produce brachypodia, a condition characterized by the lack of limb joints.

In mice homozygous for loss-of-function of the BMP antagonist Noggin, no joints form. Rather, BMP7 in these Noggin-defective embryos appears to recruit nearly all the surrounding mesenchyme into
the digits (FIGURE C).

Members of the Bone morphogenetic protein (BMP) family of secreted signalling molecules have been implicated as endogenous a regulators of skeletal development. To generate a functionally integrated skeletal system, the development and differentiation of these diverse tissues must be precisely coordinated.

a  Endogenous substances and processes are those that originate from within an organism, tissue, or cell.