Studies in cultured cells have driven our understanding of mechanisms that regulate cell shape and migration. The application of this mechanistic information to living tissues remains a challenge. Genetic studies in the model invertebrate Drososphila melanogaster have been instrumental for illuminating how cell biological mechanisms are orchestrated during tissue morphogenesis. An important tissue for such studies is the follicular epithelium that surrounds the maturing fly oocyte. Elegant developmental and genetic studies have revealed that this epithelium develops coordinately with the oocyte and establishes the body axes of the resultant embryo. Cell-cell communication coordinates the morphogenesis of the follicular epithelium with the associated germ cells, in much the same way as epithelial-mesenchymal interactions drive tissue formation in vertebrates. 2  Once formed, the follicular epithelium is subdivided to yield distinct regions of epithelial organization, small groups of migratory follicle cells, and ultimately a secretory epithelium that progressively deposits the layers of the eggshell. The follicular epithelium has been an important mode for studies of receptor tyrosine kinase signal transduction.

Each adult ovary has 14-16 ovarioles, which contain strings of developing oocytes of progressive ages.

Cell outlines visualized by phalloidin staining of the actin cytoskeleton (white). Stages of egg chambers are indicated by the numbers; and G is for germarium. Anterior is to the left. Follicle cells form an epithelium to cover the underlying germline cells. As oogenesis proceeds, follicle cells undergo shape changes and morphogenetic movements and eventually give rise to the complex structure of the eggshell.

At the end of each ovariole are 2-3 germline stem cells (GSCs) in a structure called the germarium. Differentiating daughters of GSCs, the cystoblasts, undergo four mitotic divisions to form a 16-cell syncytium, or cyst. One germ cell becomes an oocyte; the remaining 15 become nurse cells. Nearby, follicle cell stem cells (FCSCs) give rise to precursor follicle cells. About 16 precursor follicle cells invade between cysts, cease division and become pre-polar cells, which ultimately become polar cells a and stalk cells.

Schematic of stage 6 (A) and 10 (B) follicles.
In all figures, follicles are arranged with anterior towards the left. The arrangement and fates of different cells are indicated by the colors of their nuclei: oocyte (dark brown), nurse cells (light brown), central follicle cells (gray), polar cells (red), stalk cells (light blue), outer border cells (green), stretched cells (pink), centripetal cells (dark blue) and posterior terminal cells (black). Although it is thought that the border, stretched and centripetal cells are specified by stage 6, no markers are available to differentiate them until later. 3


Other precursor cells form a simple epithelium around the cyst, creating an egg chamber. Differentiation of the 5-8 stalk cells separates the newly formed egg chamber from the germarium. The oocyte grows substantially, due to uptake of yolk protein synthesized in the follicle cells and fat, and occupies almost half the egg chamber by stage 10A.

During stages 10B to stage 14, nurse cells transfer their cytoplasmic contents to the oocyte [15]. The FCs deposit the vitelline membrane and eggshell over the oocyte. The oocyte completes maturation; nurse cells and FCs undergo apoptosis. The anterior end of a mature egg has a pair of dorsal appendages for embryonic respiration, an operculum for larval exit, and a micropyle for sperm entry 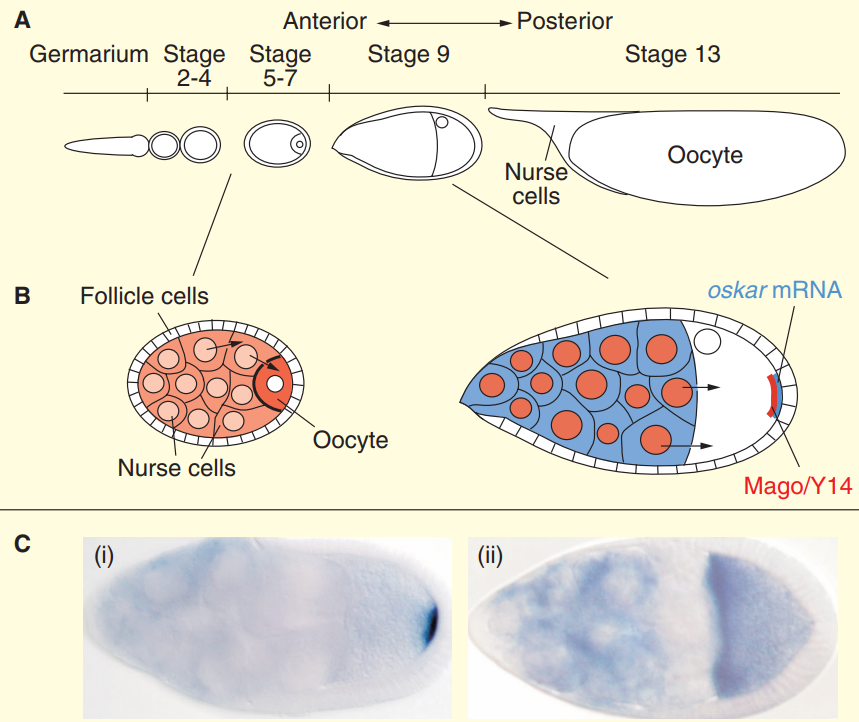 Drosophila oogenesis.
(A) The Drosophila ovariole is composed of the germarium and a series of egg chambers. A single cystoblast, situated at the anterior tip of the germarium, undergoes four incomplete divisions to form a
cyst of 16 germline cells interconnected by specialized structures called ring canals. Only one cell within the cyst adopts the oocyte fate, and localizes to the posterior of the egg chamber, while the other 15 cells undergo DNA endoreduplication and develop as nurse cells.
(B) The oocyte grows as it receives cytoplasmic contents (orange) from the transcriptionally active nurse cells, which ultimately undergo apoptosis at the end of oogenesis. A layer of somatic follicle
cells surrounds the germline cells. At stage 8/9 of oogenesis, Oskar mRNA (blue) is transported from the nurse cells through the ring canals into the oocyte and, within the oocyte, from the anterior
to the posterior pole. At this stage, Mago and Y14 proteins (red) are localized in the nuclei and at the posterior pole. (C) Localization of oskar mRNA at stage 9 of oogenesis in (i) wild-type and (ii) mago nashi mutant egg chambers. In wild-type egg chambers, oskar mRNA localizes to the posterior pole of the oocyte. This localization is completely abolished in mago nashi mutant oocytes, and oskar mRNA is only detected at the anterior pole. In both panels, oskar mRNA is detected by in situ hybridizations.

Adult stem cells are undifferentiated cells, present in adult tissues, which have the potential to give rise to two or more distinct cell types. They are important for maintaining tissue homeostasis in a wide variety of tissues across the animal kingdom.

a Patterning of the Drosophila egg requires the establishment of several distinct types of somatic follicle cells (  in mammals, somatic cells make up all the internal organs, skin, bones, blood and connective tissue ) , as well as interactions between these follicle cells and the oocyte. The polar cells occupy the termini of the follicle and are specified by the activation of Notch. 3