The wing is derived from a precursor group of ~ 30 cells that invaginates from the embryonic ectoderm. This occurs in the anterior/ mid-part of the embryo, at the boundary between the second and third parasegments (the parasegments are sections of the ectoderm established along the whole anterior-posterior axis of the embryo)  These cells form the wing imaginal disc, a mono-layered sac of epithelial cells that will undergo growth and patterning during the larval stages 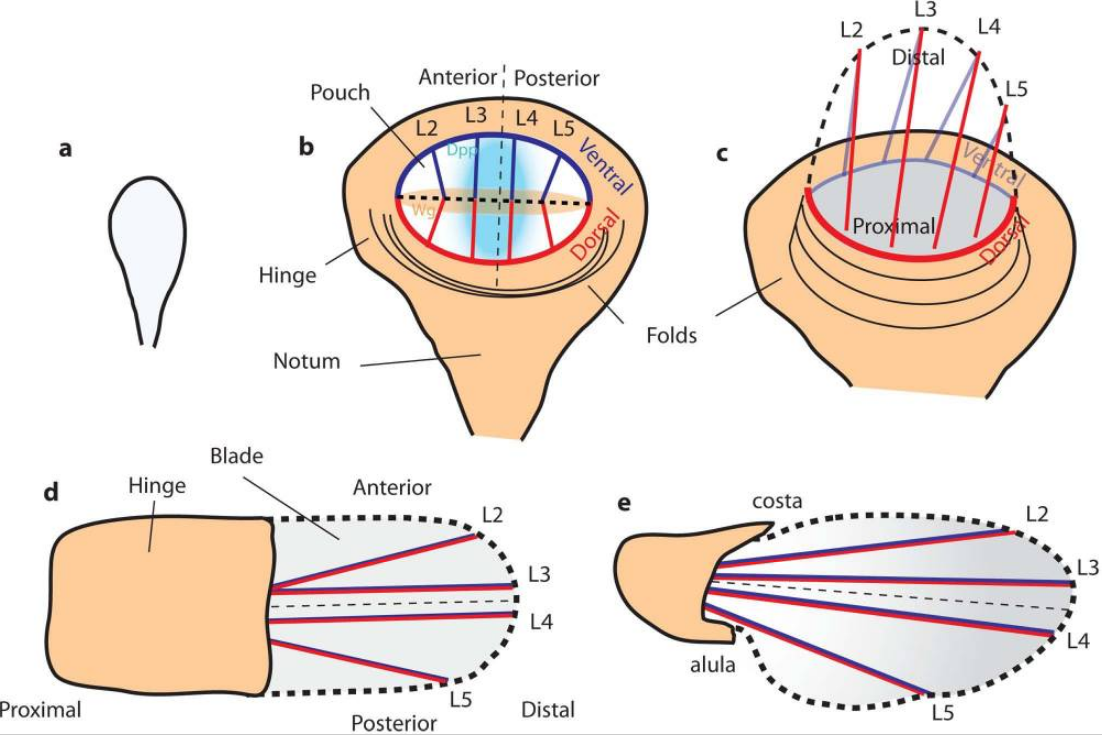 Overview of Drosophila wing development
a 2nd instar larval disc.
b- 3rd instar larval disc with compartments defined by the dorso/ventral (D/V) and anterior/posterior (A/P) boundaries, and morphogen gradients of Dpp, (produced by cells at the A/P boundary) and Wg, (produced by cells at the D/V boundary).
c – Evagination of the disc. The wing pouch folds along its D/V boundary (thick dashed line), apposing dorsal and ventral compartments, and the blade extends and become elongated along the proximal-distal axis. The part of the hinge behind the blade folds back and elongates as the blade does.
d – Early pupal wing after evagination and expansion.
e – Late-pupal wing. The hinge contraction creates tension that drives the elongation of the wing blade. The posterior/proximal margin becomes curved and an indentation becomes visible at the intersection between L5 and the wing margin. The costa and alula are visible. At this stage the shape of the wing blade is similar to adult shape.

The two halves of the sac-shaped wing imaginal disc differentiate into a layer of columnar cells that will develop into the adult structures of the wing and the dorsal thorax (notum), and a peripodial membrane consisting of squamous cells, which does not give rise to adult tissue 1

Orientation of cell division
Many studies have shown that the orientation of cell division is not random during wing disc growth. Moreover, disruption of the pattern of oriented cell divisions affects the shape of the adult wing. Both mechanical and molecular signals govern orientation of cell division in the larval stages. A major determinant is the Fat (Ft) Dachsous (Ds) Four-jointed (Fj) system. ds and fj genes are expressed as opposed gradients in the disc: ds expression is high in the hinge region and it gradually decreases to be low in the central region of the blade, whereas fj has the opposite pattern.  The characteristic radial orientation of mitosis is lost in flies carrying mutant alleles for ft or ds, with clear effects on the shape of the disc and of the adult wing. Since changes in the orientation of growth by the fat-ds-fj system have effects on the adult wing shape, it is important to understand how these gradients are established. A key element is the transcription factor Vestigial (Vg). Vestigial is expressed in a graded fashion in a pattern which is very similar to Fj expression and complementary to Ds expression. The regulation of ds and fj by vg is crucial for the control of growth direction, raising the question of how the gradient of Vg is established. The activation of the vgBE is made by Wingless and Notch signaling. Thereafter, Vg resulting from the activity of the vgBE acts synergistically with Wg and Dpp to activate the vgQE in the blade.

The regulation of vg gene expression is complex. It is mediated by Wingless - Notch- Dpp signalling, but also by Vestigial itself, Fat, Dachsous, Yorkie and Hippo.  To summarize, the orientation of cell divisions in the central areas of the blade and in the AP and DV boundaries seems to originate from cell signalling by Notch and by the morphogens Dpp and Wg. These signals then generate a gradient of Vestigial expression along the P/D axis, which patterns the expression of Dachsous, Four-jointed and Dachs.