Defending the Christian Worlview, Creationism, and Intelligent Design » Molecular biology of the cell » Epigenetics » Where does the epigenetic information come from ?

Where does the epigenetic information come from ?

One of the greatest mysteries in cell life is how the information stored in the cell itself can dynamically control the many changes that continuously take place in living cells and in living beings. So, the first question is: what is this information, and where is it stored? 2

Of course, the classical answer is that it is in DNA, and in particular in protein-coding genes. But we know that today that answer is not enough.

Indeed, a cell is an ever-changing reality. If we take a cell, any cell, at some specific time t, that cell is the repository of a lot of information, at that moment and in that state. That information can be grossly divided in (at least) two different compartments:

The transcriptome/proteome is the sum total of all proteins and RNAs (and maybe other functional molecules) that are present in the cell at time t, and which define what the cell is and does at that time.The chromatin configuration can be considered as a special “reading” of the genomic information, individualized by many levels of epigenetic control. While the genomic information is more or less the same in all cells, it can be expressed in myriads of different ways, according to the chromatin organization at that moment, which determines what genes or parts of the genome are “available” at time t in the cell. In this way, one genomic sequence can be read in multiple different ways, with different functional meanings and effects. So, if we just stick to protein-coding genes, the 20000 genes in the human genome are available only partially in each cell at each moment, and that allows for a myriad of combinatorial dynamic “readings” of the one stable genome. Two important points:


Now, let’s try to imagine the flow of dynamic information in the cell as a continuous interaction between these two big levels of organization: 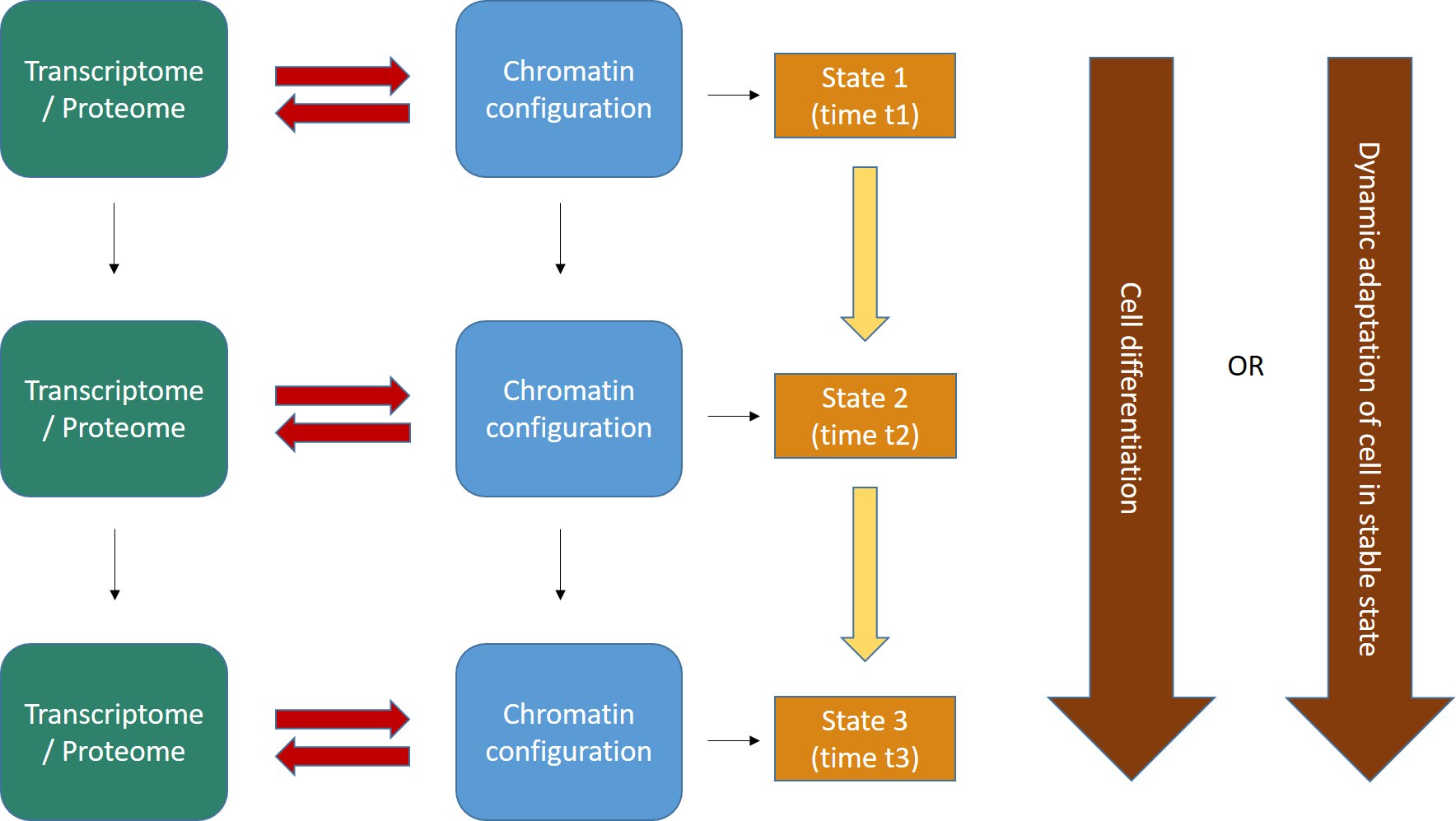 
Now, let’s have a look at the main components that make the whole process possible. I will mention only briefly the things that have been known for a long time and will give more attention to the components for which there is some recent deeper understanding available. We start with those components that are part of the DNA sequence itself, In other words (IOWs) the genes themselves and those regions of DNA which are involved in their transcription regulation (cis-regulatory elements).Cis elements Genes and promoters Of course, genes are the oldest characters in this play. We have the 20000 protein-coding genes in the human genome, which represent about 1.5% of the whole genomic sequence of 3 billion base pairs. But we must certainly add the genes that code for noncoding RNAs: at present, about 15000 genes for long non-coding RNAs, and about 5000 genes for small noncoding RNAs, and about 15000 pseudogenes. So, the concept of a gene is now very different than in the past, and it includes many DNA sequences that have nothing to do with protein-coding. Moreover, it is interesting to observe that many non-protein-coding genes, in particular, those that code for lncRNAs, have a complex exon-intron structure, like protein-coding genes, and undergo splicing, and even alternative splicing. For a good recent review about lncRNAs, see here:The GENCODE v7 catalog of human long noncoding RNAs: Analysis of their gene structure, evolution, and expressionLet’s go to promoters.  Wikipedia: In genetics, a promoter is a region of DNA that initiates transcription of a particular gene. Promoters are located near the transcription start sites of genes, on the same strand and upstream on the DNA (towards the 5′ region of the sense strand). Promoters can be about 100–1000 base pairs long.A promoter includes:

The second modality is the foundation for the concept of histone code: in that sense, histone marks work as signals of a symbolic code, whose effects in most cases are mediated by complex networks of proteins which can write, read or erase the signals.3D configuration of ChromatinOne the final effects of epigenetic markers, either DNA methylation or histone modifications, is the change in 3D configuration of chromatin, which in turn is related to chromatin accessibility and therefore to transcription regulation.This is, again, a very deep and complex issue. There are specific techniques to study chromatin configuration in space, which are independent of the mapping of chromatin accessibility and of epigenetic markers. The most used are chromosome conformation capture(3C) and genome-wide 3C(Hi-C). Essentially, these techniques are based on specific procedures of fixation and digestion of chromatin that preserve chromatin loops and allow to analyze them and therefore the associations between distant genomic sites (IOWs, enhancer-promoter associations) in specific cells and in specific cell states.Again to make it brief, chromatin topology depends essentially on at least two big factors:The generation of specific loops throughout the genome because of enhancer-promoter associationsThe interactions of chromatin with the nuclear laminaAs a result of those, and other, factors, chromatin generates different levels of topologic organization, which can be described, in a very gross simplification, as follows, going from simpler to more complex structures:Local loopsTopologically associating domains (TADs): This are bigger regions that delimit and isolate sets of specific interaction loops. They can correspond to the idea of isolated “transcription factories”. TADs are separated, at a genomic level, by specific insulators (see later)Lamina-associated domains (LADs and Nucleolus associated domains (NADs): these correspond usually to mainly inactive chromatin regionsChromosomal territories, which are regions of the nucleus preferentially occupied by particular chromosomesA and B nuclear compartments: at a higher level, chromatin in the nucleus seems to be divided into two gross compartments: the A compartment is mainly formed by active chromatin, the B compartment by repressed chromatin[/list]

Figure below  shows a simple representation of some of these concepts.

The concept of TAD is particularly interesting, because TADs are insulated units of transcription: many different enhancer-promoter interactions (and therefore loops) can take place inside a TAD, but not usually between one TAD and another one. This happens because TADs are separated by strong insulators.
A very good summary about TADs can be found in the following paper:

This is taken from Fig. 1 in that paper, and gives a good idea of what TADs are: 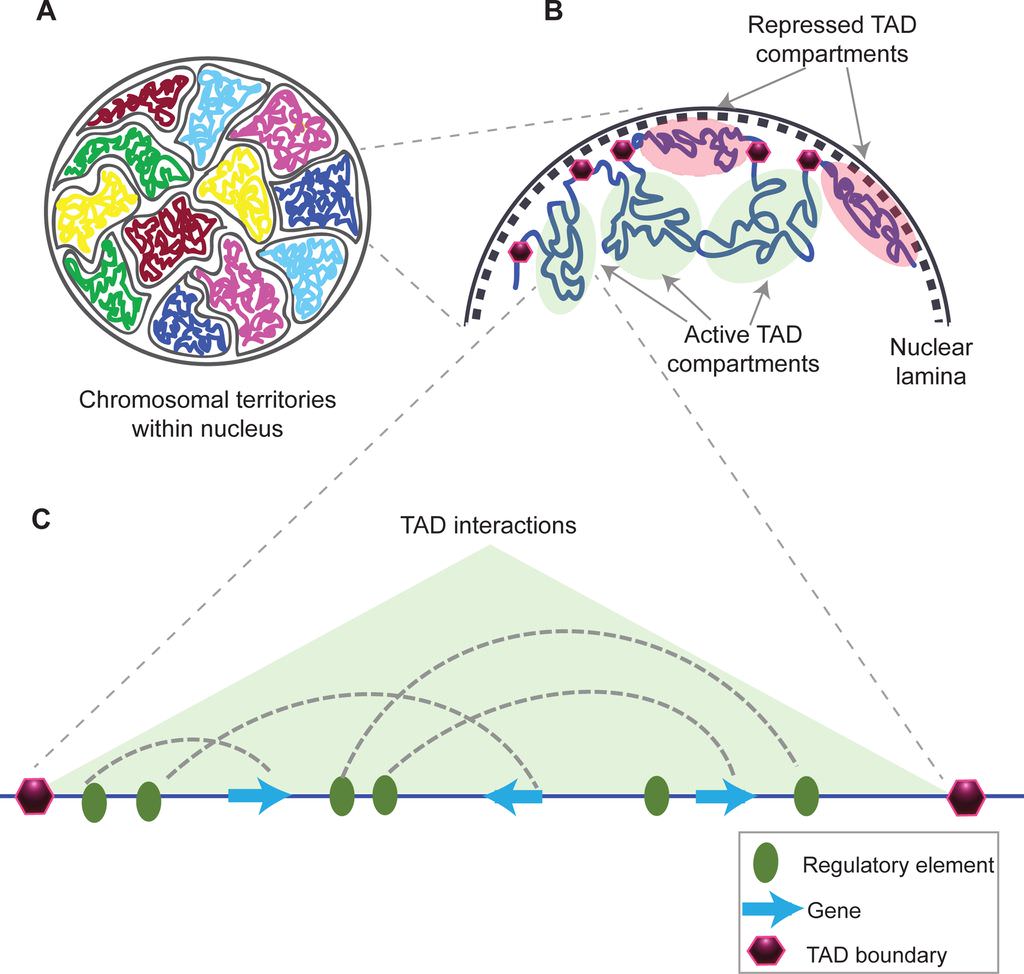 Structural organization of chromatin
(A) Chromosomes within an interphase diploid eukaryotic nucleus are found to occupy specific nuclear spaces, termed chromosomal territories.
(B) Each chromosome is subdivided into topological associated domains (TAD) as found in Hi-C studies. TADs with repressed transcriptional activity tend to be associated with the nuclear lamina (dashed inner nuclear membrane and its associated structures), while active TADs tend to reside more in the nuclear interior. Each TAD is flanked by regions having low interaction frequencies, as determined by Hi-C, that are called TAD boundaries (purple hexagon).
(C) An example of an active TAD with several interactions between distal regulatory elements and genes within it.
Source: Matharu, Navneet (2015-12-03). “Minor Loops in Major Folds: Enhancer–Promoter Looping, Chromatin Restructuring, and Their Association with Transcriptional Regulation and Disease“. PLOS Genetics 11 (12): e1005640. DOI:10.1371/journal.pgen.1005640. PMID 26632825. PMC: PMC4669122. ISSN 1553-7404.
Author: Navneet Matharu, Nadav Ahituv
By Navneet Matharu, Nadav Ahituv [CC BY-SA 4.0 (https://creativecommons.org/licenses/by-sa/4.0)], via Wikimedia Commons

There is, of course, a good correlation between the three types of analysis and genomic mapping that we have described::

However, these three approaches are different, even if strongly related. They are not measuring the same thing, but different things that contribute to the same final scenario.

But what are these insulators, the boundaries that separate TADs one from another?
While the nature of insulators can be complex and varies somewhat from species to species, in mammals the main proteins responsible for that function are CTCF and cohesin.
CTCF is indeed a TF, a zinc finger protein with repressive functions. While it has other important roles, it is the major marker of TAD insulators in mammals. It is 727 AAs long in humans, and its evolutionary history shows a definite information jump in vertebrates (0.799 baa, 581 bits) as shown in Fig. 5, which is definitely uncommon for a TF.

We have already encountered CTCF as one of the epigenetic markers used in histone code mapping. Its importance in transcription regulation and in many other important cell functions cannot be overemphasized.

Cohesin is a multiprotein complex which forms a ring around the double stranded DNA, and contributes to a lot of important stabilizations of the DNA fiber in different situations, especially mitosis and meiosis. But we know now that it is also a major actor in insulating TADs, as can be seen in Fig 4, and in regulating chromatin topology. Cohesin and its interacting proteins, like MAU2 and NIPBL, are a fascinating and extremely complex issue of their own, so I just mention them here because otherwise this already too long post would become unacceptably long. However, I suggest here a final, very recent review about these issues, for those interested:

Abstract:
The last decade has radically renewed our understanding of higher order chromatin folding in the eukaryotic nucleus. As a result, most current models are in support of a mostly hierarchical and relatively stable folding of chromosomes dividing chromosomal territories into A‐ (active) and B‐ (inactive) compartments, which are then further partitioned into topologically associating domains (TADs), each of which is made up from multiple loops stabilized mainly by the CTCF and cohesin chromatin‐binding complexes. Nonetheless, the structure‐to‐function relationship of eukaryotic genomes is still not well understood. Here, we focus on recent work highlighting the biophysical and regulatory forces that contribute to the spatial organization of genomes, and we propose that the various conformations that chromatin assumes are not so much the result of a linear hierarchy, but rather of both converging and conflicting dynamic forces that act on it.

So this is the part where I should argue about how all the things discussed in this OP do point to design. Or maybe I should simply keep silent in this case. Because, really, there should be no need to say anything.
But I will. Because, you know, I can already hear our friends on the other side argue, debate, or just suggest, that there is nothing in all these things that neo-darwinism can’t explain. They will, they will. Or they will just keep silent.
So, I will briefly speak.
First of all, a summary of what has been said. I will give it as a list of what really happens, as far as we know, each time that a gene starts to be transcribed in the appropriate situation: maybe to contribute to the differentiation of a cell, maybe to adjust to a metabolic challenge, or to anything else.

And now, a few considerations:

So, the last question could be: can all this be the result of a neo-darwinian process of RV + NS of simple, gradual steps?
That, definitely, I will not answer. I think that everybody already knows what I believe. As for others, everyone can decide for themselves.

Defending the Christian Worlview, Creationism, and Intelligent Design » Molecular biology of the cell » Epigenetics » Where does the epigenetic information come from ?