Once again researchers have discovered a design in God’s creation that, thus far, human engineers cannot mimic.
In a study published in the journal Small, researchers investigated the rainbow design on the thorax and wing casings of the Philippine snout weevil.

The snout weevil sports circular scales arranged in concentric circles of colors ranging from blue in the center to red on the outside—the same order as the colors of the rainbow. The weevil’s colors entice design engineers because, unlike human-made color images, the insect’s rainbow circles provide a high color fidelity regardless of the angle from which one views them.
The study revealed that 3-D crystal structures made from chitin, the substance found in most insect exoskeletons, produce the vibrant color palette. The size of the crystal structures and the volume of chitin determine the display of color. The larger scales with larger crystals and more chitin reflect red light and the smaller scales with smaller crystals and less chitin reflect blue.

In most animals with chitin, the size and volume of the structures is fixed, and their orientation determines their color, with different angles reflecting different wavelengths of colors, Vinodkumar Saranathan, the lead researcher, explained in a statement.
According to Saranathan, most insects can produce one or two colors, but rarely can a single insect produce a whole spectrum of color. And the weevil’s ability to simultaneously control both the size and volume of the structures to display fine-tuned color is unique. Current technology cannot come close to such color synthesis, he said.
If engineers ever mastered the snout weevil’s design, it would offer applications in any industry that deals with color production. Engineers could use it to create digital screen displays that the user could view from any angle with no image or color distortion. Researchers could also use it to create cosmetics and paints with purer and more vivid hues.
“The ultimate aim of research in this field is to figure out how the weevil self-assembles these structures, because with our current technology we are unable to do so,” Saranathan said.
Perhaps the divine Engineer who placed the rainbow in the sky could assist the researchers in discovering how He also placed the same hues on the wings of the snout weevil. 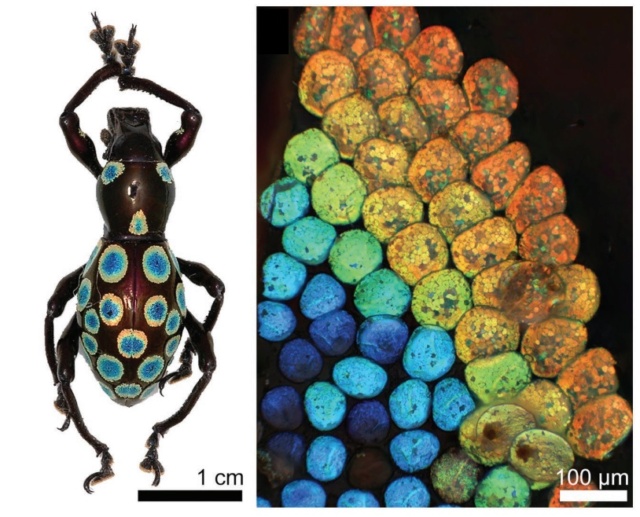 » Dinos with humans
» Are humans the most complex organism??
» Are all humans born atheists ?
» Transposons and Retrotransposons
» My articles