Neither theists, nor atheists, can demonstrate if God exists, or if the natural world is all there is.

If no deity exists, atheists will not gain anything by disbelieving in God.  Then both, atheists, and theists, will die one day, and everything will be over. In a thousand years, it will make no difference, if you lived like a saint or a jerk.  If atheists live their worldview consequently, then they will acknowledge that their existence is empty, meaningless, hopeless, even if they try giving a self-defined meaning, and the "show", life,  is limited to here and now. When the owl whistles and death knocks on the door, everything is over, so all that atheists want to get from their lives, they have to get it here and now. Since it is so, there would be no reason to do any self-sacrifice and live altruistically. Even if in some nations the majority is incredulous, education and living standard is high, and crime rate is low,  if analyzed from a wider angle, if the fear of God is removed, more people will think that crime is rewarding, and it is faster to lower or remove the bar, and give room to temptation. To steal, kill, cheat, lie, betray, etc. The consequence is more crimes, and a higher probability to end in jail. Nations would behave more egoistically, slavery would be more common. History has taught us what dictators, driven by atheistic doctrines are able to do.  Go to jail, and ask a prisoner, if, while committing his crimes, he was a fervorous believer and follower of Christ, reading the Bible, and asking the Lord for guidance, and doing Christs will......

Christians, even if they were wrong,  would still have gained, since living according to Christ's commands, means loving the next and live peacefully and just,  according to the guidance of a higher moral standard exposed in the scriptures they believe in. That means, their life quality will still improve and be higher based on their beliefs. This is evidenced in history, where Christianity has shaped western civilization in many ways for the better. The liberties and human rights of secular governments,  freedom, and rights of the individual,  and so the criminal and justice system are a direct consequence of the Bible and its teachings, and so the belief that man is accountable to God and that the law is the same regardless of social position, power and wealth. The education system, care of orphans and the elders, and hospitals go back to the spread of monasteries, which were taking care of the general population. Science began to flourish in the western world, like Occam's razor in the twelfth century, and many science fathers, like Galilei, Newton, Volta, Ohm, Ampere, Kelvin, Faraday etc. were all Christians.  To say that religion is venom for society pointing to all atrocities committed in the past means ignoring the fact that not all that claimed to be Christians, practised what Christ taught, namely to love their neighbour.

If the God of the Bible is real, then we all will resurrect, and, want it or not, become believers, and recognize the scriptures were true. But then its too late to repent, and change mind.  Promoting an atheistic worldview and disbelieve in Gods existence then is foolish. Unbelievers lose to live according to the meaning and reason that God gave them their lives, that is to glorify their creator, know him and make him known, and they will have eventually less life quality ( for the reasons described above ), they lose their salvation, when they die, they will go immediately to the place destined to the lost, condemned souls, waiting for end trial, and be  judged and punished according to their sins, and go to suffer painfully in hell eternally.

The  born again - redeemed and saved follower of  Christ,  gained peace with God here on earth and a fulfilled life, and forgiveness, peace in his mind and spirit, a meaningful and fulfilled life, walking on the way the Lord prepared for him since eternity, and will experience the fulfilling of his deepest desires, namely to spend eternity in Glory with and in the near presence of the almighty, loving, just, eternal God, eventually with his loved ones, and reign with Christ in all eternity in the heavenly kingdom, in mansions prepared by the Lord for the ones that love HIM. Many are the promises, not to be mentioned here.

The atheist, of course, can say now: Well, even if it is foolish to be a non-believer, I can't think differently or oblige myself to believe in what I don't believe. I cannot recognize Gods existence. There is no evidence for his existence.

The bible is pretty clear on this:

Romans 1. 18 - 23:
19 Because that which may be known of God is manifest in them; for God hath shewed it unto them. 20 For the invisible things of him from the creation of the world are clearly seen, being understood by the things that are made, even his eternal power and Godhead; so that they are without excuse: 21 Because that, when they knew God, they glorified him not as God, neither were thankful; but became vain in their imaginations, and their foolish heart was darkened. 22 Professing themselves to be wise, they became fools

Matthew 21:22
If you believe, you will receive whatever you ask for in prayer."

Luke 11:10
"For everyone who asks receives; he who seeks finds; and to him who knocks, the door will be opened." -

Daniel 12:2,3 ( King James )
And many of them that sleep in the dust of the earth shall awake, some to everlasting life, and some to shame {and} everlasting contempt. And they that be wise shall shine as the brightness of the firmament, and they that turn many to righteousness as the stars forever and ever.

Pacal's wager is not about agnosticism. On the contrary it is was designed to inspire faith in God via an appeal to human prudence and the wager.
Now, please consider the following question;

What should a mortal person [who may be subject to eternal punishment/or eternal bliss if God exists/or who may be subject to no consequences if he does not exist] do before he or she dies?
Should he/she live like he does exist [so that if he does exist or doesn't exist ] he/she can experience eternal bliss rather than eternal judgement or so he/she neither gains or losses anything? Or should he/she live like he does not exist?---bearing in mind this, that is to say, that if he does exist he or she will be subject to eternal consequences and eternal loss.
What would should a prudent person decide to do?

This is the sought of thinking PASCAL was trying to inspire in us. This is the kind of question Pascal wants prudent people to consider before they die.
The argument [from Pascal's wager] is as follows:

1.) Every human has a decision to make before they die. 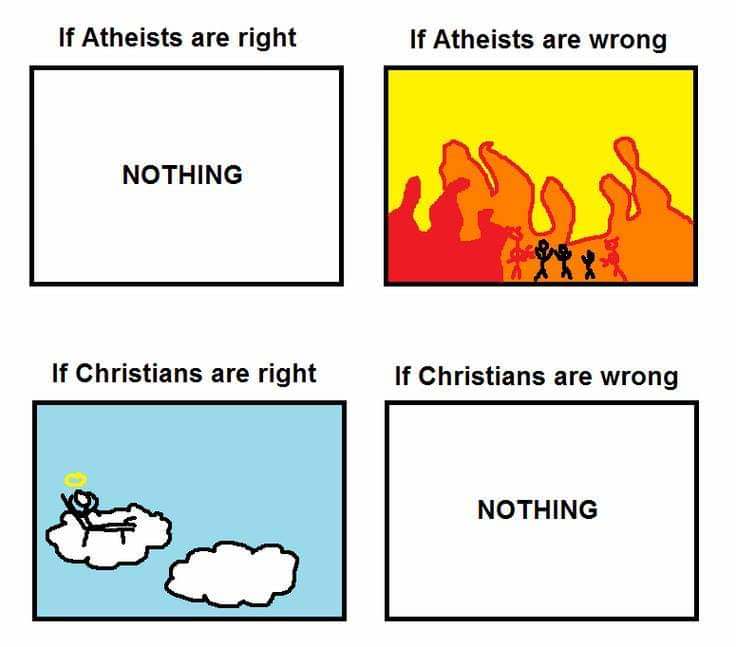 THIS POST IS ABOUT MY ARGUMENT [FROM THE PASCALIAN WAGER] IN FAVOUR OF THE FOLLOWING PROPOSITIONS, NAMELY THAT IT IS PRUDENT TO BECOME A THEIST BEFORE YOU DIE OR THAT IT IS NOT PRUDENT TO DIE AS AN ATHEIST

[Bearing in mind that God is logically possible]

1.) It is either that a statement is true, or it negation is true. [The law of excluded middle]

2.) This is a statement, namely that The God of the Abrahamic faith exists.

And subsequently 3.) it is either that this statement is true, namely that The God of the Abrahamic faith exists, or its negation is true.

4.) The negation is as follows, that is to say, that The God of the Abrahamic faith does not exist.

And subsequently 9.) a prudent person would choose to believe this proposition before he or she died, that is to say, that The God of the Abrahamic faith exists.

Therefore 10.) a prudent person would become a theist before he or she died.

knowing God and having a relationship with him
receiving salvation and eternal life
receiving a new nature, and the holy spirit
Being his adopted child
experiencing his grace and love
witness to others
having true meaning, which will last forever
self-worth,
hope for an eternal life in heaven.
peace with God

1 John 3:14: “We know that we have passed out of death into life, because we love the brethren. He who does not love abides in death.”
1 John 4:7: “Beloved, let us love one another, for love is from God; and everyone who loves is born of God and knows God.”
1 John 5:1: “Whoever believes that Jesus is the Christ is born of God, and whoever loves the Father loves the child born of Him.”
1 John 5:4: “For whatever is born of God overcomes the world; and this is the victory that has overcome the world—our faith.”
1 John 5:18: “We know that no one who is born of God sins; but He who was born of God keeps him, and the evil one does not touch him.”
Gal. 5:22-23: love, joy, peace, patience, kindness, goodness, faithfulness, gentleness, and self-control

Atheists commonly confess ignorance and base it on the claim that there is no evidence of God. The consequence of such a position is:

the lack of
objective moral values
meaning of life
lack of recognition of the real intrinsic value of human beings
what really matters in life ( to love God, and your next )
understanding
inner peace
knowledge
security

Atheism is an idea that doesn’t matter. It leads to no good, it gives an illusion of freedom, it helps no one and it tends to either universal anarchy and chaos or totalitarian despotism, and the ultimate fate and consequence is to die and be judged upon their own sins and mistakes and paying for their sins and rejection of God in Hell forever and ever.

Atheism is cancer no matter how you try and sugar coat it. The only manifestation of atheism in state power is totalitarianism. No exceptions. For two centuries-- from 1789-- every atheist philosophy that has risen to power has brought hell to earth among the people under its boot. Atheist 'secular humanism' has one salient characteristic-- it never survives the rise of atheism. What begins with an edited Jefferson always ends with a pockmarked Caligula. Atheism in power has always been totalitarian.

Atheist rank the highest in 4 stats, suicide, depression, medication intake and school shootings. If that is not FAIL, I do not know what is... 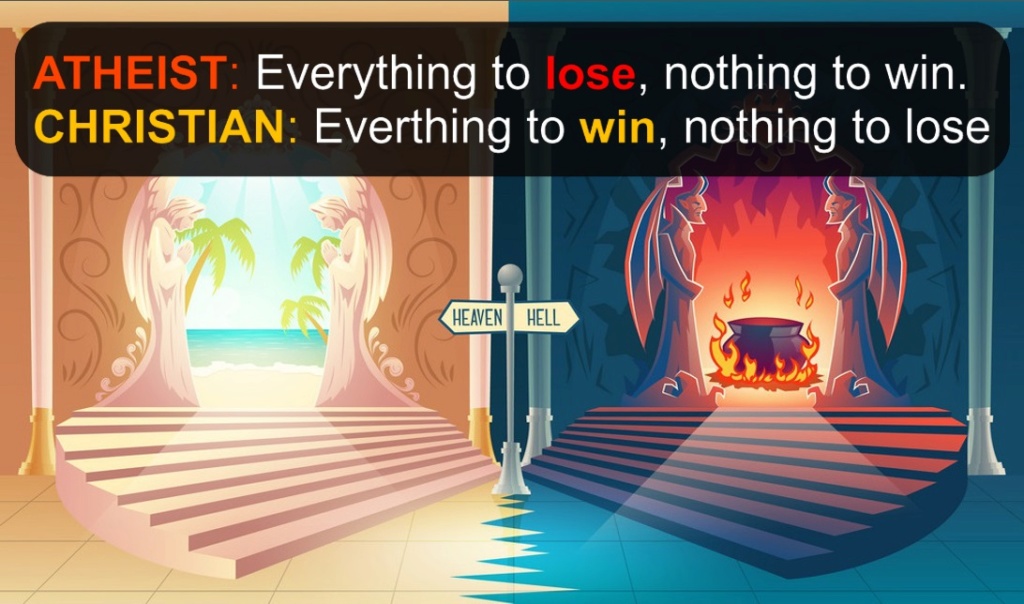 Re: Pascal's Wager in new clothes