Defending the Christian Worldview, Creationism, and Intelligent Design » The catalog of life » The glasshead barreleye fish with FOUR eyes, with 360° vision to spot prey and predators

The glasshead barreleye fish (Rhynchohyalus natalensis) lives at depths of between 800metres to 1,000metres in the Tasman Sea, near New Zealand
It has two primary cylindrical eyes pointing upwards so it can see prey or predators silhouetted against the gloomy light above
A second set of silvery eyes on the side of its head have a mirror-like second lens and retina so that it see to the sides and below 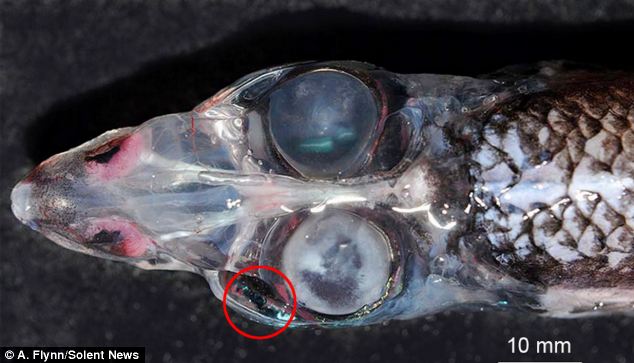 The glasshead barreleye fish (rhynchohyalus natalensis) has four eyes with 360° vision. It is thought that the peculiar creature has evolved with extra eyes (one is circled) so that it can detect prey, predators and mates from every angle 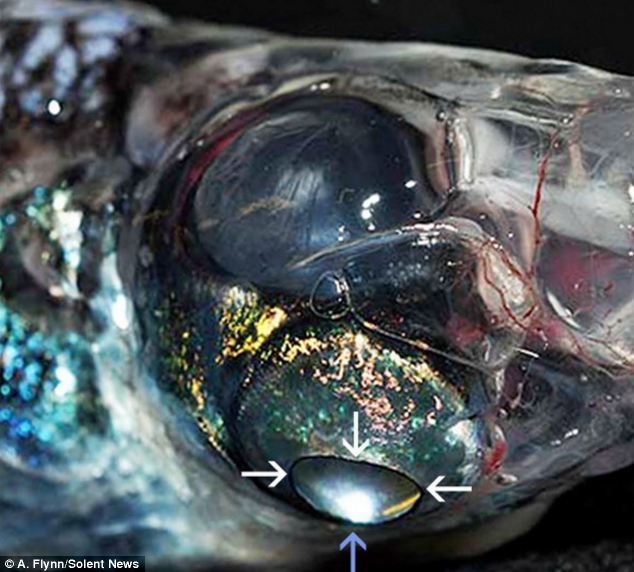 
It might look like an alien from outer space, but this bizarre creature is a four-eyed fish that lives deep beneath the ocean on our planet. The fish's extra pair of eyes give it 360° vision, even though the animal lives deep below the ocean's surface in almost pitch-black waters.  The scientist who made the discovery believes the glasshead barreleye fish has  extra eyes so it can detect prey, predators and potential mates. Also known as Rhynchohyalus natalensis, it lives at depths of between 2,600ft (800 metres) and 3,300ft (1,000 metres).
It has two primary cylindrical eyes pointing upwards so it can see prey or predators silhouetted against the gloomy light above.

Further to “Deep sea fish uses tripod to ‘stand’,” Phys.org alerts us to a fish with a previously unknown type of eye. From Phys.org:


The aptly-named glasshead barreleye lives at depths of 800 to 1000 meters. It has a cylindrical eye pointing upwards to see prey, predators or potential mates silhouetted against the gloomy light above. But the eye also has a mirror-like second retina which can detect bioluminescent flashes created by deep-sea denizens to the sides and below

The light coming from below is focused onto a second retina by a curved mirror composed of many layers of small reflective plates made of guanine crystals, giving the fish a much bigger field of vision.

Watch the legacy mainstream media rush to ignore this one:

The glasshead barreleye is therefore one of only two vertebrates known to have reflector eyes; but significantly, although rhynchohyalus natalensis and dolichopteryx longipes belong to the same family, their reflective lenses have a different structure and appear to have developed from different kinds of tissue. That indicates that two related but different genera took different paths to arrive at a similar solution – the reflective optics and a second retina to supplement the limited vision of the conventional refractive cylindrical eye.

Convergent evolution in different genera.
And, of course, we will hear that scientists explain that the fish evolved this way *so that it can* detect predators, prey, and potential mates. Like we said before, that is not an explanation of how it evolved, only of what the system can currently do. In this case, two different highly complex systems, convergently “evolved” to fulfil these functions.
Readers, do you ever get the feeling, listening to Darwin-approved news copy, that you are listening to a sociopath on the witness stand in a criminal court case? It’s all specialized terminology for obfuscation of basic issues like “What exactly happened?” “Did you actually see this?”

Defending the Christian Worldview, Creationism, and Intelligent Design » The catalog of life » The glasshead barreleye fish with FOUR eyes, with 360° vision to spot prey and predators

» A dinoflagellate protist which has eyes like in vertebrates, and ballistic multi-barrel guns for taking out prey. By design, or evolution?
» Fish with 4 eyes
» A 'four-eyed' deep sea fish which uses powerful mirrors for eyes instead of lenses
» The bola spider , which hunts by lassoing its prey
» The spitting spider, how could it evolve is ability to catch prey ?