Ciliates comprise a diverse and ecologically important phylum of unicellular protists. One of the most specious and best-defined genera is Euplotes  3  Ciliates (unicellular protists of the phylum Ciliophora) are ubiquitous, abundant and eye-catching components of aquatic environments. In some systems of biological classification, the Protozoa are defined as a diverse group of unicellular eukaryotic organisms.[1] Historically, protozoa were defined as single-celled animals or organisms with animal-like behaviors, such as motility and predation. The group was regarded as the zoological counterpart to the "protophyta", which were considered to be plant-like, as they are capable of photosynthesis 1

Eukaryotic cells typically stabilize their plasma membranes with a more-or-less tightly associated layer of cytoskeletal proteins, forming a complex often referred to as the `membrane skeleton'. A classic example has been the spectrin network linked (via ankyrins and several actin-binding proteins) to integral membrane glycoproteins at the cytoplasmic face of the erythrocyte plasmalemma 4 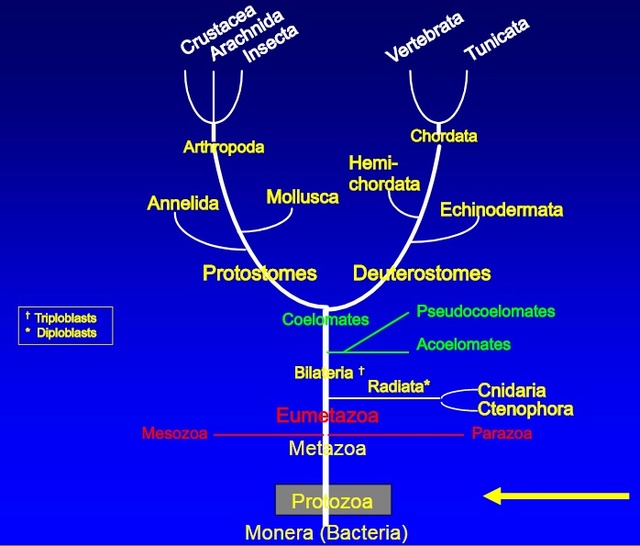 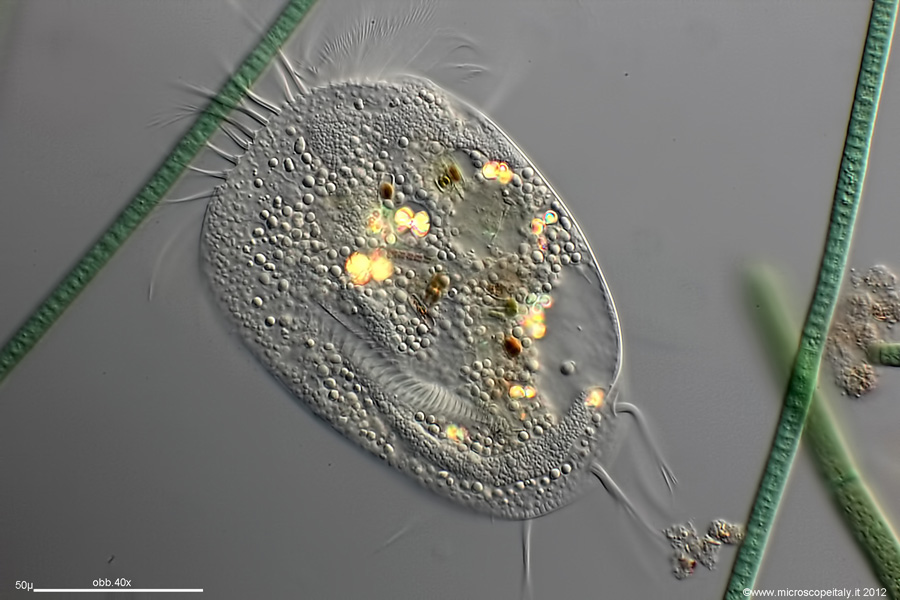 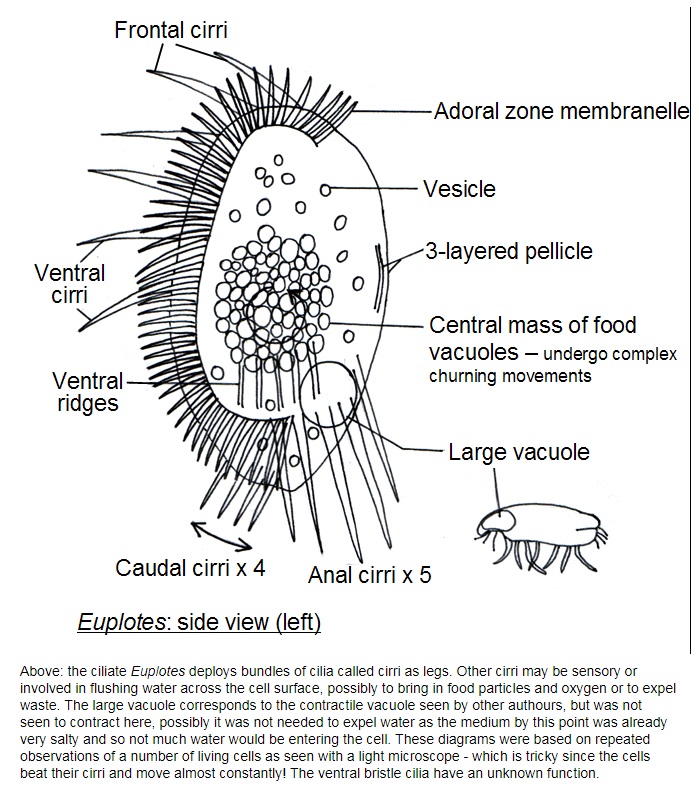 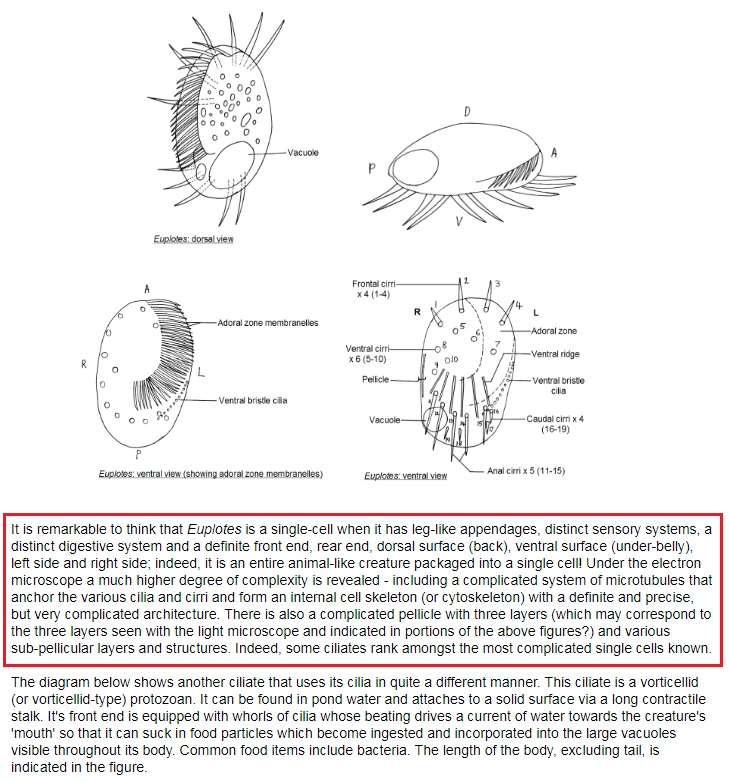 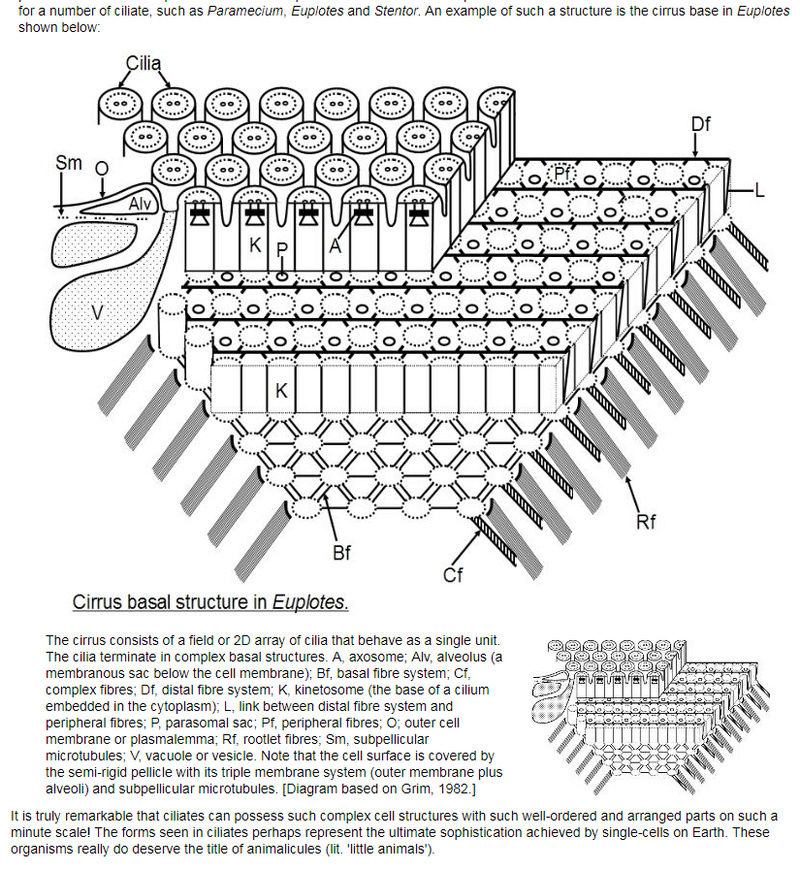 Cilia on the ventral surface of the hypotrich ciliate Euplotes are clustered into polykinetids or compound ciliary organelles, such as cirri or oral membranelles, used in locomotion and prey capture. A single polykinetid may contain more than 150 individual cilia; these emerge from basal bodies held in a closely spaced array within a scaffold or framework structure that has been referred to as a basal-body "cage". Cage structures were isolated free of cilia and basal bodies; the predominant component of such cages was found on polyacrylamide gels to be a 45-kDa polypeptide. Antisera were raised against this protein band and used for immunolocalizations at the light and electron microscope levels. Indirect immunofluorescence revealed the 45-kDa polypeptide to be localized exclusively to the bases of the ventral polykinetids. Immunogold staining of thin sections of intact cells further localized this reactivity to filaments of a double-layered dense lattice that appears to link adjoining basal bodies into ordered arrays within each polykinetid. Scanning electron microscopy of isolated cages reveals the lower or "basal" cage layer to be a fine lacey meshwork supporting the basal bodies at their proximal ends; adjoining basal bodies are held at their characteristic spacing by filaments of an upper or "medial" cage layer. The isolated cage thus resembles a miniature test-tube rack, able to accommodate varying arrangements of basal-body rows, depending on the particular type of polykinetid. Because of its clear and specific localization to the basal-body cages in Euplotes, we have termed this novel 45-kDa protein "cagein". 5

It is remarkable to think that Euplotes is a single-cell when it has leg-like appendages, distinct sensory systems, a distinct digestive system and a definite front end, rear end, dorsal surface (back), ventral surface (under-belly),
left side and right side; indeed, it is an entire animal-like creature packaged into a single cell! Under the electron microscope a much higher degree of complexity is revealed - including a complicated system of microtubules that
anchor the various cilia and cirri and form an internal cell skeleton (or cytoskeleton) with a definite and precise, but very complicated architecture. There is also a complicated pellicle with three layers (which may correspond to
the three layers seen with the light microscope and indicated in portions of the above figures?) and various sub-pellicular layers and structures. Indeed, some ciliates rank amongst the most complicated single cells known.

One of its most striking features imho is its locomotion through cilia. The arrangement of cytoskeletal filaments beneath the pellicle of ciliates can be very complicated, but is always regular and precise. It is sometimes possible to see these patterns under the microscope. It is truly remarkable that ciliates can possess such complex cell structures with such well-ordered and arranged parts on such a minute scale! The forms seen in ciliates perhaps represent the ultimate sophistication achieved by single-cells on Earth. These organisms really do deserve the title of animalicules (lit. 'little animals').

Primary Cilium a Cell’s Antenna or Its Brain

The argument from wound healing cilium
1. The cilium that looks like an antenna on most human cells, orients cells to move in the right direction at the speed needed to heal wounds, and so acts like a Global Positioning System (GPS) that helps ships navigate to their destinations.
2. “The really important discovery is that the primary cilium detects signals, which tell the cells to engage their compass reading and move in the right direction to close the wound.”
3. “Protruding through the cell membrane, primary cilia occur on almost every non-dividing cell in the body.”
4. “Once written off as a vestigial organelle discarded in the evolutionary dust, primary cilia in the last decade have risen to prominence as a vital cellular sensor at the root of a wide range of health disorders, from polycystic kidney disease to cancer to left-right anatomical abnormalities.”
5. The unavoidable importance of the primeval cilium for the survival of the cell and its wonderful design proves the existence of the primeval designer God.
6. God necessarily exists.

The flagellum is a prima facie example of intelligent design, which has become well known since Behe's book Darwins Blackbox. In his following book, The edge of evolution, Behe describes in detail the Cilia, the non motile sister of the flagellum. It is less known. What science has discovered in recent years, is a serious challenge for proponents of naturalistic origins. Jon Lieff describes the amazing capabilities of the cilia in his article: