Eukaryotic cells are nicely organized - all the important bits are housed in the nucleus or associated with other organelles. But, what about bacteria? How do they keep everything organized without organelles?
During a long time, people assumed that bacteria were just little bags filled with genetic material, proteins, and other molecules. The other assumption was that all of these components just sloshed about willy-nilly without any strict organizational scheme.

The insides of bacteria stay organized, even without organelles.
It turns out, however, that the innards of bacterial cells are surprisingly well-organized.
The cell poles of rod-shaped bacteria are one hub at which proteins accumulate and organize themselves. The poles are particularly important for localizing sensory systems. In E. coli, the receptors for chemotaxis and phosphotransferase (carbon uptake) systems, for example, organize themselves at the cell poles. The fact that both of these systems localize to the same part of the cells means it’s easy for them to communicate with each other - the two systems have to work together to make sure the bacteria find the right nutrients.
In addition to the poles, the protein MreB helps confer an organizational structure to the bacterial cell. MreB is an actin homolog that has been likened to a bacterial cytoskeletal protein, shuttling proteins to and fro.
MreB is attached to the cytoplasmic face of the inner membrane. One of MreB’s jobs in E. coli is to relocate penicllin binding proteins from one part of the cell to another so that they can remodel the cell wall. In Caulobacter crescentus, however, MreB localizes the protein PilT to the cell poles.

Where are things inside a bacterial cell?

Bacterial cells are intricately organized, despite the lack of membrane-bounded organelles. The extremely crowded cytoplasm promotes macromolecular self-assembly and formation of distinct subcellular structures, which perform specialized functions. For example, the cell poles act as hubs for signal transduction complexes, thus providing a platform for the coordination of optimal cellular responses to environmental cues. Distribution of macromolecules is mostly mediated via specialized transport machineries, including the MreB cytoskeleton. Recent evidence shows that RNAs also specifically localize within bacterial cells, raising the possibility that gene expression is spatially organized.

The bacterial cell — no more a bag of macromolecules ?
Bacterial cells generally lack internal membrane-bounded structures, and were thus viewed for many years as bags of mostly randomly localized macromolecules. However, research in the past two decades has completely changed
this view. With the advent of imaging technologies and fluorescent proteins, it has been revealed that bacterial cell constituents are exquisitely organized, with the different macromolecules, including proteins, RNAs, DNA and lipids, displaying complex subcellular localization patterns. Analysis of global proteome organization of Caulobacter crescentus suggested that nearly 10% of this bacterium’s proteins are specifically localized. Because macromolecular compartmentalization in eukaryotic cells is primarily mediated through membrane-surrounded organelles, the intricate higher-order organization in the ‘organelle-less’ bacterial cells has puzzled cell biologists and provoked reconsideration of the evolutionary origins of organelles. Thus, instead of confining macromolecules to membrane-bounded organelles, bacterial cells rely on the formation of supramolecular assemblies within their extremely crowded cytoplasmic compartment, as well as in other subcellular domains where such assemblies might be associated with membrane domains (see Figure 1). 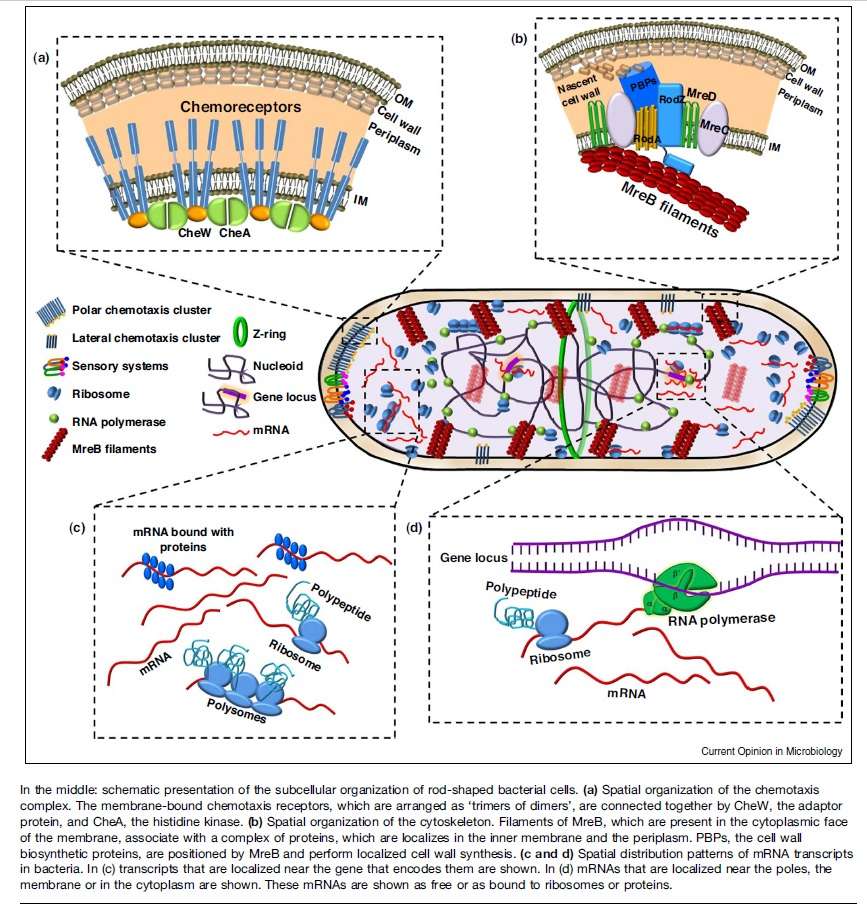 These subcellular assemblies function as distinct entities undergoing complex dynamic reorganization, which is essential for processes ranging from cell division to differentiation. More intriguingly, certain subcellular assemblies
within these tiny cells coordinate localized biochemical reactions, resulting in heterogeneous distribution of metabolites. Notably, eukaryotic cells also utilize this compartmentalization strategy that does not rely on membranes, for example, the nucleolus, stress granules and P-bodies, whereas special micro-compartments, which are protein encapsulated organelle-like structures or membrane-bounded compartments, have been observed in some bacteria.