Defending the Christian Worlview, Creationism, and Intelligent Design » Astronomy & Cosmology and God » The make of the Earth and its interior

The make of the Earth and its interior 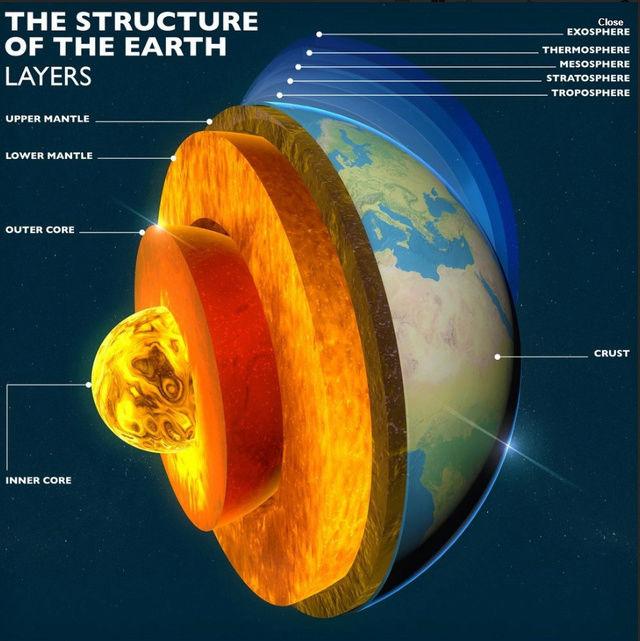 Earth's iron core stays solid despite being hotter than the SUN because its atoms 'shuffle like a deck of cards' 3
Within the planet's molten iron core lies another, inner iron core, which despite being hotter than the surface of the sun, does not melt. Instead, the iron maintains itself in a solid crystal form at all times. A new study may have finally solved the puzzle of how this occurs, suggesting that the atoms in the inner core are constantly reshuffling to stop the core from ever becoming a liquid. Spinning within Earth's molten core is a mass of pure crystallised iron that is nearly the size of the moon. At Earth's core the pressure is 3.5 million times higher than surface pressure and temperatures are some 6,000°C (10,800°F) higher. At this extreme temperature and pressure, molecules are set in motion. This is known as diffusion and causes atomic instability in the iron core, warping the iron crystals into a liquid. But within the inner core, pieces of the iron crystal slide off like a liquid, only to then be reinserted. The researchers describe this process as 'like shuffling a deck of cards'. This atomic recycling stops the crystal iron core from ever losing its solid structure and becoming a liquid. The theory, from researchers at KTH Royal Institute of Technology in Sweden, sheds new light on the strange, unobservable core of Earth.

The solid inner core  is the most remote and enigmatic part of our planet, and, next to the crust, is the smallest “official” subdivision of Earth's interior. It was discovered in 1936, and by 1972 it was established that it was solid, albeit with a very small rigidity 4  The inner core is isolated from the rest of Earth by the low-viscosity fluid outer core, and it can rotate, nod, wobble, precess, oscillate, and even flip over, being only loosely constrained by the surrounding shells. Its existence, size, and properties constrain the temperature and mineralogy near the center of the Earth. Among its anomalous characteristics are low rigidity and viscosity (compared with other solids), bulk attenuation, extreme anisotropy, and superrotation. From seismic velocities and cosmic abundances, we know that it is composed mainly of iron-nickel crystals, and the crystals must exhibit a large degree of common orientation. The inner core is predicted to have very high thermal and electrical conductivity, a nonspherical shape, and frequency-dependent properties; also, it may be partially molten. It may be essential for the existence of the magnetic field and for polarity reversals of this field. Freezing of the inner core and expulsion of impurities is likely responsible for powering the geodynamo. Yet, the inner core represents less than 1% of the volume of Earth, and only a few seismic waves ever reach it and return to the surface. The inner core is a small target for seismologists, and seismic waves are distorted by passing through the entire Earth before reaching it. Conditions near the center of the Earth are so extreme that both theoreticians and experimenters have difficulty in duplicating its environment. Nevertheless, there has been a recent flurry of activity about the inner core by seismologists, geochemists, dynamicists, materials scientists, and geodynamo theoreticians. Almost everything known or inferred about the inner core from seismology or from indirect inference is controversial.

Why Earth's Inner and Outer Cores Rotate in Opposite Directions 5
The Earth's magnetic field controls the direction and speed at which Earth's inner and outer cores spin, even though they move in opposite directions. Scientists have long suspected that Earth's magnetic field — which protects life from harmful space radiation — drifts in a slightly westerly direction.  By the mid-20th century, geologists had gathered further evidence for this drift and had determined that the westerly rotation of the magnetic field exerts a force on the liquid outer core— composed of a molten mix of iron and nickel — that causes it to rotate in a westerly direction. Decades later, geophysicists used deep seismic data to determine that the inner core — a solid iron-nickel alloy that is about the size of the moon — rotates in an easterly direction, at a greater speed than the rotation of the Earth itself. But, until now, scientists have regarded these rotations within the two layers of the core as separate, with no relation to each other.

Now, researchers at the University of Leeds in England have found a common link between the two rotations by creating a computer model that shows how the rotation of the Earth's magnetic field can both pull the liquid outer core in a westerly direction while also exerting an opposite force on the inner core that causes an easterly rotation.

Previously, there have been these two independent observations, and there has not been a link between them. "We argue that the magnetic field itself is pushing on the outer core, and there is an equal and opposite push on the inner core." The Earth's magnetic field — created by the convection of hot liquid metal within the outer core — undergoes slight fluctuations roughly every decade. The inner core's rotation rate has also been shown to fluctuate on a similar timescale. These new results help explain why these two phenomena occur on the same timescale since one has now been shown to affect the other, the researchers say.

Convection currents 6
Earthquakes, volcanoes, tsunamis, hurricanes and the Earth’s magnetic field are all consequences of our planet trying to lose heat as fast at it can and converting (temporarily) some of this thermal energy into mechanical energy as it does so. The crust and top of the mantle loses heat to the adjacent oceans and atmosphere, becomes dense, and sinks at subduction zones. This pulls open a gap at the surface allowing the hotter mantle down below to rise at volcanic mid-ocean ridges. This process of mantle convection via plate tectonics is an extraordinarily effective means of transferring the Earth’s heat that is both much faster and far more interesting than simple conduction. It is not our planet’s only great and beautiful internal heat engine, however. The Earth’s liquid core is a lot hotter than the solid mantle above it and so, once more, heat must flow upwards and outwards. This core-mantle heat flow is the ultimate driver of mechanical flow in the liquid core and so we have another heat engine. In detail however, things in the core are a little more complicated and uncertain than in the mantle. The core fluid (an iron alloy) is a very good thermal conductor which gets in the way of thermal convection as is happening in the mantle.  The core is vigorously convecting. As the core is losing heat, it is freezing from the centre (where the pressure is greatest) outwards. This means that the solid inner core is progressively growing at the expense of the liquid outer core above. As well as changing the size of the outer core, this freezing process is also affecting its composition. Only the densest, iron part of the fluid freezes onto the inner core so the outer part is left with the lighter, residual part of the alloy. Light means buoyant, buoyant means flow (upwards), flow means convection. But this time: bottom-up compositionally driven convection rather than the top-down thermally driven convection exhibited by the mantle.


What would happen if the core of the Earth cools down?
The Earth's core is indeed cooling down, but it will take billions of years to complete to do so. But what would happen if the core was frozen solid? For one, Earthquakes would not occur, nor would volcanoes be active. It may seem to be a good thing, but for humans and other organisms that utilize minerals, it is a bad thing in the long run. Without a molten core, churning up of minerals, especially to the surface, would not have happened. And this is very crucial. Especially to many human civilizations. But that is not the main problem. Without a molten core, Earth's magnetic field would no longer exist. Without it, the beautiful light streaks (Auroras) seen at the polar region would not exist.

Admin
Posts : 6080
Join date : 2009-08-09
Age : 54
Location : Aracaju brazil
There was a time, far far back, when the earth was just an iron asteroid. In a bit mysterious manner, it began rotating around the sun. For some unknown freaking reasons, the inner core of the asteroid "froze" from the surrounding molten iron outer core.

had recently been created, volcanoes were very active, and spewing ashes into space ( there was no atmosphere yet ).

Defending the Christian Worlview, Creationism, and Intelligent Design » Astronomy & Cosmology and God » The make of the Earth and its interior