It's one of the tiniest organisms on Earth, but also one of the most abundant.

The marine cyanobacterium Prochlorococcus is the smallest and most abundant photosynthetic organism on Earth. 4 . It is the smallest (the cell diameter is 0.5–0.7μm)2 and most abundant photosynthetic organism on the planet, with an estimated global population of ~10^27 cells.  Prochlorococcus has the smallest genome of any free-living phototroph; some isolates have genomes as small as 1.65Mbp, with only ~1,700 genes. It is the only type of marine phytoplankton that uses the divinyl form of chlorophyll a and chlorophyll b to harvest light energy, which causes a slight red shift in its absorption spectra.   This unique pigmentation has made it possible to determine that Prochlorococcus accounts for 50% of the total chlorophyll in vast stretches of the surface oceans.  Collectively, this cyanobacterium produces an estimated 4 gigatons of fixed carbon each year, which is approximately the same net primary productivity as global croplands.

Meet the obscure microbe that influences climate, ocean ecosystems, and perhaps even evolution 5
Prochlorococcus is the smallest, most abundant photosynthesizing cell in the ocean—responsible for 5% of global photosynthesis.  Its many different versions, or ecotypes, thrive from the sunlit sea surface to a depth of 200 meters, where light is minimal.  Collectively the "species" boasts an estimated 80,000 genes—four times what humans have, and plenty to deal with whatever the world's oceans throw at it. "It's a beautiful little life machine and like a superorganism," Chisholm says. "It's got a story to tell us." 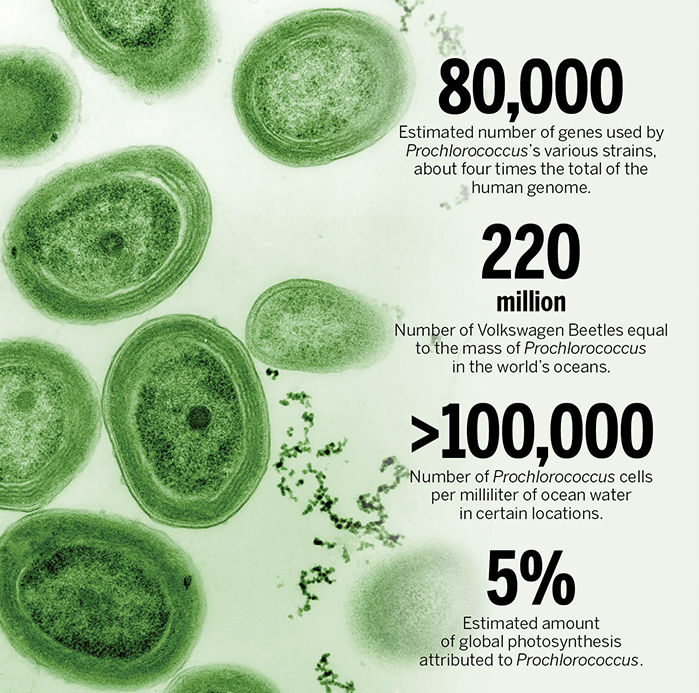 When the U.S. Department of Energy's Joint Genome Institute first began sequencing microbes in 2003, Chisholm convinced it to sequence two Prochlorococcus strains—this at a time when sequencing a single microbe was a big deal—so she could assess genetic differences between the forms adapted to low and high light levels. "That was very greedy of me," she smiles. Her team found the high light–adapted ecotype's genome was very streamlined—1.7 million bases with just 1700 genes. "It's one of, if not the, simplest self-sustaining organism we know of," says Chisholm's postdoc Jamie Becker. The low-light version's genome has 2.4 million bases, with 2275 genes, including some that may enable the microbe to work best in low light and avoid damage from the sun should it wind up at the surface somehow.

Together, her lab found that each of the main Prochlorococcus ecotypes has its own genomic "island," a patch of genes that confers specific adaptations to an environment. One island helps the microbe survive in very low-phosphorus waters, for example. Bacteriophages, viruses that infect bacteria and can either pick up or deposit genetic material, may move these islands and other genes between ecotypes, Chisholm's postdoc Debbie Lindell proposed in 2004, thereby ensuring the microbes can adapt to changing conditions.

The worldwide sampling showed that the five primary ecotypes didn't begin to capture Prochlorococcus's diversity. Sequencing revealed hundreds of strains coexisting even in just a milliliter of seawater, each with more than 100 distinctive genes. And when it became possible to sequence genomes from single cells—a technique Chisholm's lab pioneered for marine microbes—each strain turned out to encompass still more genetic variation. "It's not one bug, it's a whole family of things that grade into each other," says Olson, now at WHOI.

Although each cell has only about 2000 genes, Prochlorococcus as a whole has a "pan-genome" of perhaps 80,000 genes, Chisholm and her colleagues estimate. "That's a ton of information for these little guys," she says, and it must be the secret of Prochlorococcus's success. Its enormous genomic repertoire enables it to cope with conditions across a vast swath of the oceans, dominating warm seas from 40° North to 40° South

These waters contain an estimated 3 billion billion billion Prochlorococcus cells, collectively weighing as much as 220 million Volkswagen Beetles. That abundance makes the microbe a heavyweight in ocean food webs and climate. It is a key source of food in the nutrient-poor regions of the ocean where it flourishes.  "Prochlorococcus makes organic matter that other microorganisms eat." And because of its role in the carbon cycle, the microbe significantly regulates levels of climate-warming carbon dioxide (CO2)

She continues to be driven to unravel the story of Prochlorococcus. In 2014, for example, electron micrographs taken in her lab revealed tiny vesicles budding off Prochlorococcus cells; later, her postdoc Steven Biller showed that each cell releases two to five lipid-membrane bubbles filled with DNA and RNA per generation—possible food sources for other plankton, decoys for viruses, gene-transfer vehicles, or even messengers that communicate with other microbes.

And now, Prochlorococcus can add one more superlative to its list of attributes: It evolves new kinds of metabolites called lanthipeptides, more abundantly and rapidly than any other known organism. While most bacteria contain genes to pump out one or two versions of this peptide, Prochlorococcus varieties can each produce more than two dozen different peptides (molecules that are similar to proteins, but smaller). And though all of Earth's Prochlorococcus varieties belong to just a single species, some of their localized varieties in different regions of the world's oceans each produce a unique collection of thousands of these peptides, unlike those generated by terrestrial bacteria.

Lanthipeptides are ribosomally synthesized and post-translationally modified peptides (RiPPs) that display a wide variety of biological activities, from antimicrobial to antiallodynic. lanthipeptide biosynthetic enzymes are also present in some archaea and in higher eukaryotes including mammals, lanthipeptide detection and isolation is thus far restricted to bacteria. The increase in the number of characterized lanthipeptides as a result of the bacterial genome sequencing projects has led to the realization that their functions are not limited to antimicrobial activities but also include antifungal, morphogenetic, antiviral, antinociceptive and antiallodynic functions. Lanthipeptide biosynthetic gene clusters are particularly found in the genomes of many genera of Firmicutes, Actinobacteria, Proteobacteria, Bacteroidetes, and Cyanobacteria. 3


"No one had seen the true extent of the diversity in these molecules" until this new study, Cubillos-Ruiz says. The first hints of this unexpected diversity surfaced in 2010, when Bo Li and Daniel Sher, members of van der Donk's and Chisholm's labs respectively, found that one variety of Prochlorococcus could produce as many as 29 different lanthipeptides. But the big surprise came when Cubillos-Ruiz looked at other populations and found that the same organisms, in a different location, produced similarly great numbers of the peptides, "and all of them were completely different," he says.

After considerable study examining the genomes of many Prochlorococcus cultures and pieces of DNA from the wild, the researchers determined that the way the extraordinary numbers of lanthipeptides evolve is, in itself, something that hasn't been observed before. While most evolution takes place through tiny incremental changes, while preserving the vast majority of the genetic structure, the genes that enable Prochlorococcus to produce these lanthipeptides do just the opposite. They somehow undergo dramatic, wholesale changes all at once, resulting in the production of thousands of new varieties of these metabolites.

Cubillos-Ruiz, who is now a postdoc at MIT's Institute For Medical Engineering and Science, says the way these genes were changing "wasn't following classic phylogenetic rules," which dictate that changes should happen slowly and incrementally to avoid disruptive changes that impair function. But the story is a bit more complicated than that: The specific genes that encode for these lanthipeptides are composed of two parts, joined end to end. One part is actually very well-preserved across the lineages and different populations of the species. It's the other end that goes through these major shakeups in structure. "The second half is amazingly variable," he says. "The two halves of the gene have taken completely different evolutionary pathways, which is uncommon."

The actual functions of most of these thousands of peptides, which are known as prochlorosins, remain unknown, as they are very difficult to study under laboratory conditions. Similar compounds produced by terrestrial bacteria can serve as chemical signaling devices between the organisms, while others are known to have antimicrobial functions, and many others serve purposes that have yet to be determined. Because of the known antimicrobial functions, though, the team thinks it will be useful to screen these compounds to see if they might be candidates for new antibiotics or other useful biologic products.
This evolutionary mechanism in Prochlorococcus represents "an intriguing mode of evolution for this kind of specialized metabolite," Cubillos-Ruiz says. While evolution usually favors preservation of most of the genetic structure from the ancestor to the descendants, "in this organism, selection seems to favor cells that are able to produce many and very different lanthipeptides. So this built-in collective diversity appears to be part of its function, but we don't yet know its purpose. We can speculate, but given their variability it's hard to demonstrate." Maybe it has to do with providing protection against attack by viruses, he says, or maybe it involves communicating with other bacteria.

"Prochlorococcus is trying to tell us something, but we don't yet know what that is," says Chisholm, who has joint appointments in MIT's departments of Civil and Environmental Engineering and Biology. "What [Cubillos-Ruiz] uncovered through this molecule is an evolutionary mechanism for diversity." And that diversity clearly must have very important survival value, she says: "It's such a small organism, with such a small genome, devoting so much of its genetic potential toward producing these molecules must mean they are playing an important role. The big question is: What is that role?"
In fact, this kind of process may not be unique—it may be just that Prochlorococcus, an organism that Chisholm and her colleagues initially discovered in 1986 and have been studying ever since, has provided the wealth of data needed for such an analysis. "This might be happening in other kinds of bacteria," Cubillos-Ruiz says, "so maybe if people start looking into other environments for that kind of diversity," it may turn out not to be unique. "There are some hints it happens in other [biological] systems too," he says.

Christopher Walsh, emeritus professor of biological chemistry and molecular pharmacology at Harvard University, who was not involved in this work, says "The dramatic diversity of prochlorosins assembled by a single enzyme … raises surprising questions about how evolution of thousands of cyclic peptide structures can be accomplished by alterations that favor large changes rather than incremental ones."

Lanthipeptides in marine picocyanobacteria are undergoing a rapid evolutionary process of structural diversification. It appears that the prochlorosin biosynthesis pathway has evolved such that it can generate a suite of structurally diverse natural products by using the combination of a substrate-tolerant lanthionine synthetase and a collection of precursor peptide substrates encoded in a highly dynamic family of multicopy genes poised for rapid expansion and diversification.

This type of diversity-prone selection contrasts with the evolutionary path of other lanthipeptides such as lantibiotics, which display antimicrobial activity 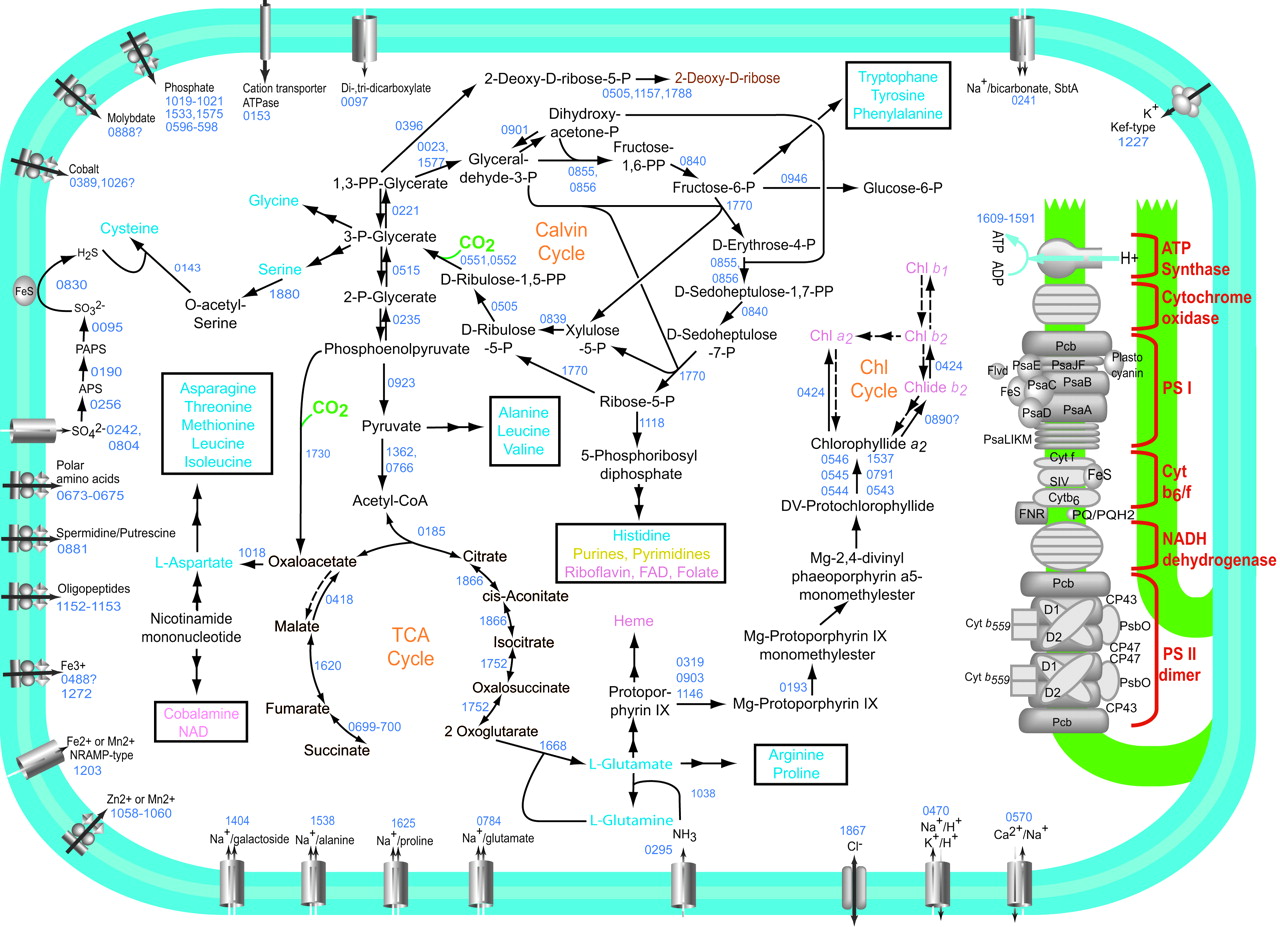