ABC Transporters
Bacterial ABC transporters are essential in cell viability, virulence, and pathogenicity. The substrates that can be transported include ions, amino acids, peptides, sugars, and other molecules that are mostly hydrophilic. The ATP-binding cassette (ABC) family is a group of proteins which bind and hydrolyse ATP in order to transport substances across cellular membranes. ATP-binding cassette transporters (ABC-transporters) are members of a protein superfamily that is one of the largest and most ancient families with representatives in all extant phyla from prokaryotes to humans. ABC transporters are transmembrane proteins that utilize the energy of adenosine triphosphate (ATP) hydrolysis to carry out certain biological processes including translocation of various substrates across membranes and non-transport-related processes such as translation of RNA and DNA repair. They transport a wide variety of substrates across extra- and intracellular membranes, including metabolic products, lipids and sterols, and drugs. Proteins are classified as ABC transporters based on the sequence and organization of their ATP-binding cassette (ABC) domain(s).

The last type of transport ATPase that we discuss is the family of the ABC transporters, so named because each member contains two highly conserved ATPase domains, or ATP-Binding “Cassettes,” on the cytosolic side of the membrane. ATP binding brings together the two ATPase domains, and ATP hydrolysis leads to their dissociation (Figure 11–16). 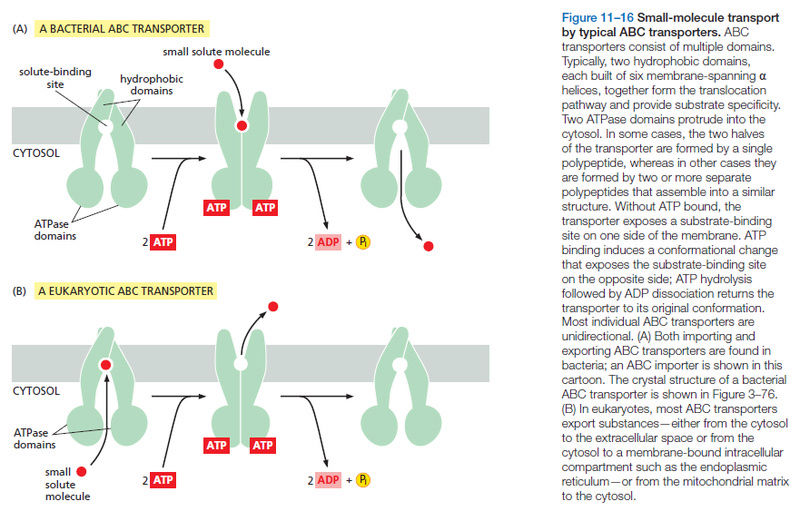 These movements of the cytosolic domains are transmitted to the transmembrane segments, driving cycles of conformational changes that alternately expose solute-binding sites on one side of the membrane and then on the other, as we have seen for other transporters. In this way, ABC transporters harvest the energy released upon ATP binding and hydrolysis to drive transport of solutes across the bilayer. The transport is directional toward
inside or toward outside, depending on the particular conformational change in the solute binding site that is linked to ATP hydrolysis (see Figure 11–16). ABC transporters constitute the largest family of membrane transport proteins and are of great clinical importance. The first of these proteins to be characterized was found in bacteria. We have already mentioned that the plasma membranes of all bacteria contain transporters that use the H+ gradient across the membrane to actively transport a variety of nutrients into the cell. In addition, bacteria use ABC transporters to import certain small molecules. In bacteria such as E. coli that have double membranes (Figure 11–17), 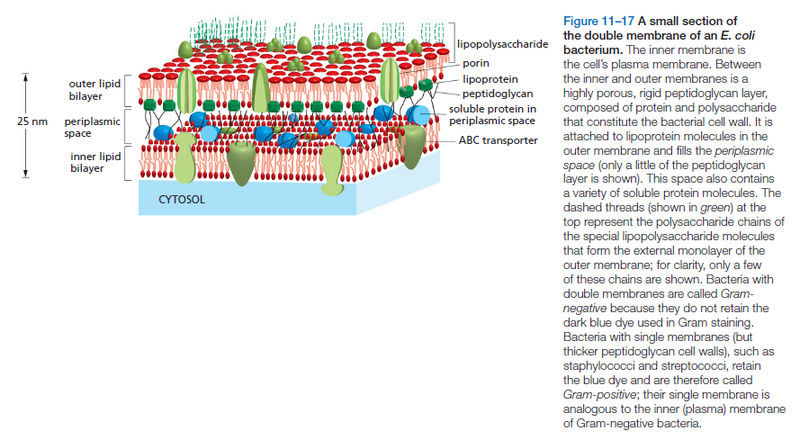 the ABC transporters are located in the inner membrane, and an auxiliary mechanism operates to capture the nutrients and deliver them to the transporters (Figure 11–18). 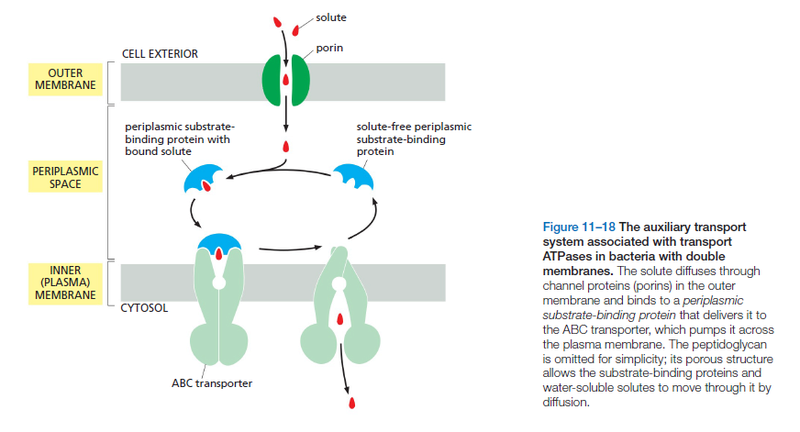 In E. coli, 78 genes (an amazing 5% of the bacterium’s genes) encode ABC transporters, and animal genomes encode an even larger number. Although each transporter is thought to be specific for a particular molecule or class of molecules, the variety of substrates transported by this superfamily is great and includes inorganic ions, amino acids, mono- and polysaccharides, peptides, lipids, drugs, and, in some cases, even proteins that can be larger than the transporter itself. The first eukaryotic ABC transporters identified were discovered because of their ability to pump hydrophobic drugs out of the cytosol. One of these transporters is the multidrug resistance (MDR) protein, also called P-glycoprotein. It is present at elevated levels in many human cancer cells and makes the cells simultaneously resistant to a variety of chemically unrelated cytotoxic drugs that arewidely used in cancer chemotherapy. Treatment with any one of these drugs can result in the selective survival and overgrowth of those cancer cells that express an especially large amount of the MDR transporter. These cells pump drugs out of the cell very efficiently and are therefore relatively resistant to the drugs’ toxic effects. Selection for cancer cells with resistance to one drug can thereby lead to resistance to a wide variety of anticancer drugs. Some studies indicate that up to 40% of human cancers develop multidrug resistance, making it a major hurdle in the battle against cancer.

A related and equally sinister phenomenon occurs in the protist Plasmodium falciparum, which causes malaria. More than 200 million people are infected worldwide with this parasite, which remains a major cause of human death, killing almost a million people every year. The development of resistance to the antimalarial drug chloroquine has hampered the control of malaria. The resistant P. falciparum have amplified a gene encoding an ABC transporter that pumps out the chloroquine. 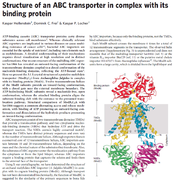 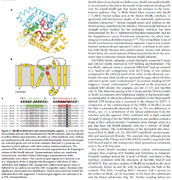 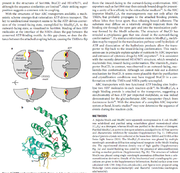 ABSTRACT
Summary: ATP-binding cassette (ABC) systems are universally distributed among living organisms and function in many different aspects of bacterial physiology. ABC transporters are best known for their role in the import of essential nutrients and the export of toxic molecules, but they can also mediate the transport of many other physiological substrates. In a classical transport reaction, two highly conserved ATP-binding domains or subunits couple the binding/hydrolysis of ATP to the translocation of particular substrates across the membrane, through interactions with membrane-spanning domains of the transporter. Variations on this basic theme involve soluble ABC ATP-binding proteins that couple ATP hydrolysis to nontransport processes, such as DNA repair and gene expression regulation. Insights into the structure, function, and mechanism of action of bacterial ABC proteins are reported, based on phylogenetic comparisons as well as classic biochemical and genetic approaches. The availability of an increasing number of high-resolution structures has provided a valuable framework for interpretation of recent studies, and realistic models have been proposed to explain how these fascinating molecular machines use complex dynamic processes to fulfill their numerous biological functions. These advances are also important for elucidating the mechanism of action of eukaryotic ABC proteins, because functional defects in many of them are responsible for severe human inherited diseases.

INTRODUCTION
The ATP-binding cassette (ABC) systems constitute one of the largest superfamilies of paralogous sequences. All ABC systems share a highly conserved ATP-hydrolyzing domain or protein (the ABC; also referred to as a nucleotide-binding domain [NBD]) that is unequivocally characterized by three short sequence motifs: these are the Walker A and Walker B motifs, indicative of the presence of a nucleotide-binding site, and the signature motif, unique to ABC proteins, located upstream of the Walker B motif. The biological significance of these motifs is discussed in Structure, Function, and Dynamics of the ABC. ABC systems are widespread among living organisms and have been detected in all genera of the three kingdoms of life, with remarkable conservation in the primary sequence of the cassette and in the organization of the constitutive domains or subunits.

ABC systems can be divided into three main functional categories, as follows. Importers mediate the uptake of nutrients in prokaryotes. The nature of the substrates that are transported is very wide, including mono- and oligosaccharides, organic and inorganic ions, amino acids, peptides, iron-siderophores, metals, polyamine cations, opines, and vitamins. Exporters are involved in the secretion of various molecules, such as peptides, lipids, hydrophobic drugs, polysaccharides, and proteins, including toxins such as hemolysin. The third category of systems is apparently not involved in transport, with some members being involved in translation of mRNA and in DNA repair.

Overview of Prokaryotic Transporters
ABC transporters are one of many different types of transporters operating in bacteria and other organisms. Transporters are of critical importance for living organisms, and selective permeability to nutrients and metabolites was probably the first distinctive property of primitive cells. Functionally and structurally different transporters have been identified in living organisms. It is customary to distinguish channels, primary transporters, and secondary transporters with respect to the source of energy used. Channels catalyze the facilitated diffusion of solutes down a concentration gradient, an energy-independent process. In the outer membranes of gram-negative bacteria, porin channels allow diffusion through a TM-spanning aqueous pore. Cytoplasmic membrane channels are gated, opening or closing in response to voltage or to membrane tension, as seen for McsS, which plays a role in protecting bacteria from hypo-osmotic shock. Primary active transporters, including the ABC transporters, couple transport against a concentration gradient to the hydrolysis of ATP. Secondary active transporters, including uniporters, antiporters, and symporters, use the energy stored in ion gradients to drive transport. A novel family of secondary high-affinity transporters, the TRAP (tripartite ATP-independent periplasmic) transporters, which primarily catalyze the transport of C4-dicarboxylates (see reference 239 for a review), although other substrates, including sialic acid, have been described, was recently reported for prokaryotes. Another family of transporters unique to prokaryotes, the phosphoenolpyruvate:sugar phosphotransferase (PTS) transporters, catalyze the uptake of sugars. Energy coupling to transport in these systems occurs via a series of phosphoryl transfer reactions (116). Transporters belong to at least 300 different protein families, and the two largest of these are the primary ABC superfamily and the secondary major facilitator superfamily.

ABC transporters: The power to change
The hypothetical LUCA is predicted to possess all classes of ABC systems.

Structure and mechanism of ABC transporters 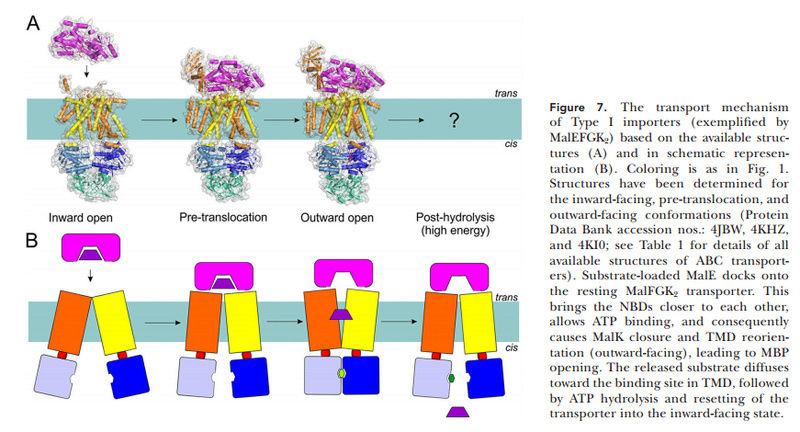 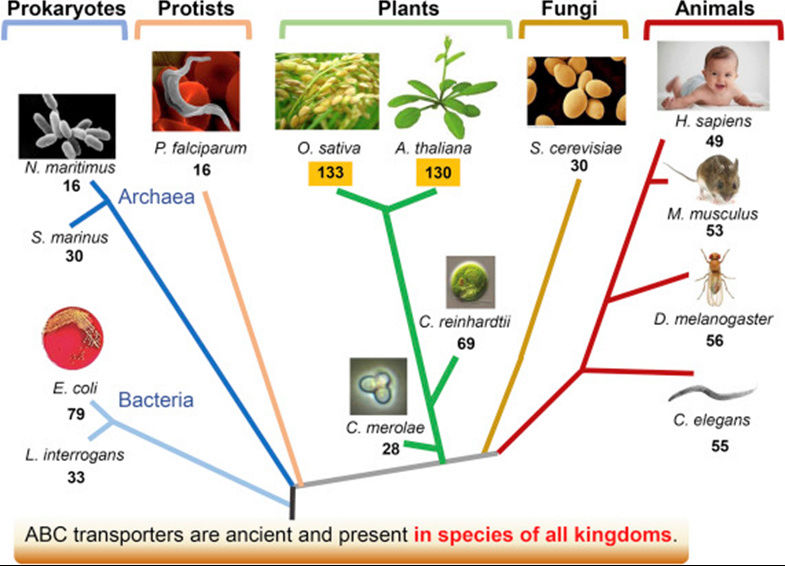