Defending the Christian Worldview, Creationism, and Intelligent Design » The catalog of life » Animals with 'Lamps' 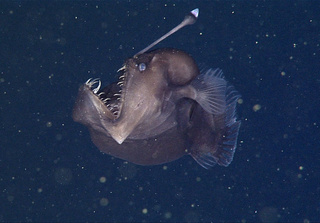 From the energy viewpoint, there is a most remarkable phenomenon exhibited by many sea animals and some land animals (e.g., glow-worms and fireflies), namely, bioluminescence (Latin lumen = light). 2 These animals can emit light of various colors (red, yellow, green, blue, or violet) and in different signal sequences. Our technological attempts at generating light look extremely amateurish in terms of energy efficiency when compared with bioluminescence. A standard electric light bulb converts only 3 to 4 percent of the energy consumed into light, and the efficiency of a fluorescent tube is only about 10%. Because our lights tend to generate more heat than light, our lamps perhaps more closely resemble ovens than lights.

The Creator's bioluminescent systems work with a 'cold light' that has an efficiency up to 95%. No man-made light source has even approached this efficiency. This involves the oxidation of certain fluorescent substances (luciferins) by an enzyme called luciferase.There are three fundamentally different types of luciferin, namely that of bacteria, that of fireflies, and that of Cypridina (clam-like creatures). American biochemist Professor W. D. McElroy, was able to quantify the efficiency of this type of light production. It was found that each quantum of energy transported to the light organ in the form of ATP1was converted to light. The number of oxidized luciferin molecules is exactly equal to the number of emitted light quanta. All the light emitted by a firefly is indeed 'cold' light, which means that there is no loss of energy as heat. Here we are confronted with lamps operating at nearly 100% efficiency where the incoming energy is almost completely converted into light. The Creator has equipped many types of bacteria, microorganisms, insects, and especially deepsea fish with this method of illumination.

THE FIREFLY 5
Here is another ID hypothesis, one of my own. It’s the Firefly.

This one is within the Scientific Theory of Irreducible Complexity. This time the irreducible complexity is observed in the firefly. In order for the illumination to occur, the following are needed:

1. Abdominal trachea. Keep in mind of what purpose this organ (complex in its own rite) serves the organism when this oxygen intake mechanism has NOTHING to do with the beetle’s need for breathing.
2. Organic Compound, luciferin. It’s challenging enough of a question to explain why the beetle’s metabolism is producing this complex compound in the first place, but just the mere fact that the compound is complex creates a problem explaining as to why NS would select to manufacturer the compound.
3. Enzyme luciferase. How did NS have the intelligence to go shopping for this enzyme, as if it were an item to go pick up at the local pharmacy?
4. Processing call bioluminescence. The firefly beetle can do nothing with these ingredients unless if there is a complex organ, like a carburetor or fuel injector that mixes the to substances together in the right quantities and ration for light illumination.
5. Light-emitting organ on the lower abdomen. And finally, even if there is electricity, you still need to harness it, which means you need a light bulb, which is yet another complex organ necessary.

The problem with the firefly is that the benefit, in this case to emanate light for mate attraction purposes, would not be reached until ALL FIVE components have been naturally selected for. That is not how NS operates in real life nature because as already noted, NS selects blindly without foresight or planning. That’s the whole point of ID. ID is not an attempt to insert the God of the Bible although too often the case too many ID proponents do. It is very much legitimate science to probe into this “foresight” characteristic of NS, and why scientist attribute or impute design intelligence to NS. That’s really what ID as a science explores, among other things. If organic chemistry drives chemistry students to madness keeping track of the hydrogen and carbon compounds, then how does NS have the ability perform biochemical engineering?

The test in this model here is to show how removing just one component of the list of five items renders the other four useful for NS to select for. If scientists can show that the other four properties are useful to NS without the other, then the hypothesis that the glowing engine of a firefly is falsified, and that it is not irreducibly complex, and NS remains the best explanation.

I have not yet come across material that was damaging to the IC hypothesis yet. I will not ever throw in the towel on IC until Michael Behe does, and it appears he stands behind it as much today, if not more so, than ever before.


The best-known examples are the fireflies and the glowworms (Lampyris and Phausis). Most of the subtropical and tropical lampiryds differ from the mid- European species in that they can emit deliberate sequences of flashes. In experiments with the pyralis firefly (Photinus pyralis), it was found that the flying male emitted 0. 06-second flashes at intervals of 5.7 seconds, and the female on the ground replied after exactly 2.1 seconds with the same rhythm. These flashing signals serve as communication between prospective mates. There also are insects with 'lamps' that emit different colors, like the Brazilian railroad worm (Phrixothrix). This larva from the beetle family of snail predators (Drilidae) normally carries two orange-red lights in front. At the approach of danger, two rows of11 greenish lanterns are switched on, one row on each side. This resemblance to a train approaching in the dark gives this larva its apt name, 'railroad worm'.

Based on the number of light-producing chemistries across the monophyletic lineages, bioluminescence is estimated to have evolved independently at least 40 times. Remarkably, not only is there evidence of independent origins within taxa (e.g., ostracods have two known chemistries: coelenterazine and vargulin) but even within individual species (e.g., the deep-sea anglerfish, Linophryne coronata, has two different light-emitting systems in adult females: bacterial luminescence in the dorsal lure and an intrinsic, unidentified chemistry in the chin barbel)

In case you are having trouble parsing this, let me translate. Proponents of evolution are forced to assume that this incredibly elegant, efficient process evolved independently at least 40 different times, and the fact that these 40 different lines of evolution produced very similar lights in each case is the result of sheer coincidence. In addition, they must assume that even species which are thought to be closely-related must have independently evolved their bioluminescence, and once again, the fact that their bioluminescence looks similar is the result of sheer coincidence. As if that’s not enough, they must also believe that within a given species, bioluminescence evolved independently at least twice, and once again, the similarities are due to sheer coincidence.

The wonders of bioluminescent millipedes 3 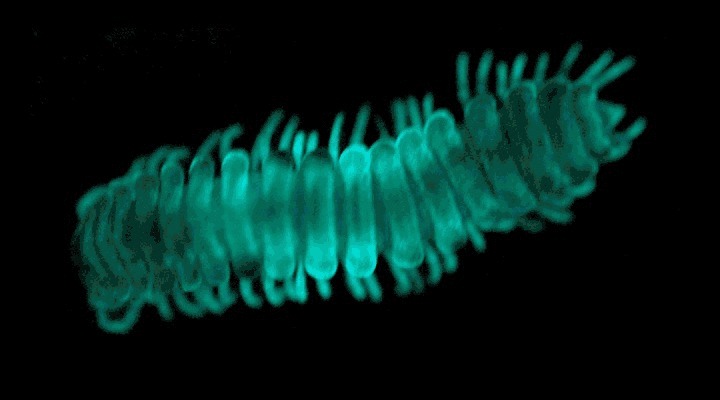 Some animals glow over their entire bodies. 4  PhysOrg shows pictures of glowing millipedes in California’s Sequoia forest that glow all over—even on their legs and antennae—though they are blind. Author Paul Marek speculates about how that evolved, picturing natural selection as a “tinkerer” that repurposes already existing parts to avoid predators. It seems, though, that turning on lights is not a good way to avoid being detected. Moreover, the Mytoxia of Sequoia, shown in an animated photo, are the only known bioluminescent millipedes; why only them, if luciferin evolved from proteins used to synthesize fatty acids for brain cells? And if they were originally for the brain, how did the glowing enzymes become distributed over the entire body? Much about these millipedes “remains mysterious” he admits, turning to the subject of biomimetics. Humans would do well to learn from their technology. Man-made lights are only about 10% efficient, compared to the 90% efficiency of bioluminescent creatures, he notes.  The phenomenon is also widespread, occurring in insects, fish, mushrooms and jellyfish. 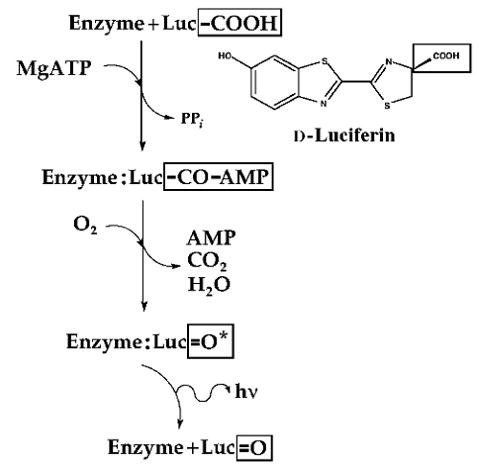 The reaction catalyzed by firefly luciferase.
In the first (activation) step, the substrate Math Eq-luciferin (Luc-COOH; 4,5-dihydro-2-[6-hydroxy-2-benzothiazolyl]-4-thiazolecarboxylic acid)is activated by acylation of its carboxylate group with the α-phosphate of ATP, resulting in the formation of an enzyme-bound  luciferyl adenylate (Enzyme:Luc-CO-AMP) and release of pyrophosphate (PPi).
In the second (oxidation) step, luciferyl adenylate reacts with stoichiometric amounts of molecular oxygen, via an α-peroxylactone intermediate, producing an enzyme-bound excited-state product (Enzyme:Luc=O∗). This excited-stated product then decays to the ground state (oxyluciferin; Luc=O) emitting yellow-green light. 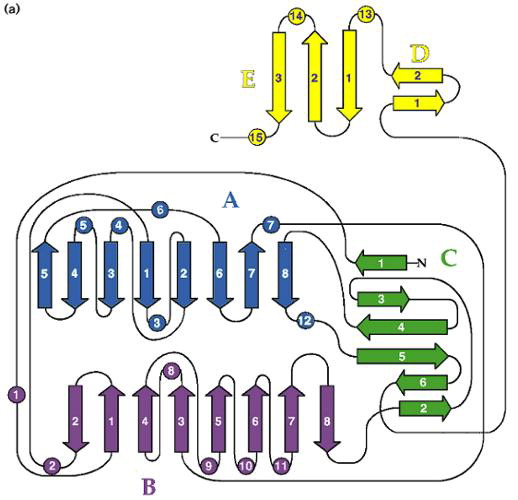 Overall topology of the firefly luciferase enzyme.
(a) Topological diagram illustrating the secondary structure elements coloured by subdomains. The circles represent α-helices, which have been numbered sequentially, and the arrows represent β-strands, which have been numbered sequentially for each of the five β-sheets, A–E. The secondary structural elements have been assigned using the program DSSP .
(b) Schematic drawing showing the location of the subdomains in the sequence, using the same colouring scheme.

Defending the Christian Worldview, Creationism, and Intelligent Design » The catalog of life » Animals with 'Lamps'