Admin
Posts : 6103
Join date : 2009-08-09
Age : 54
Location : Aracaju brazil
According to mainstream science, the period between 4.0 and 3.5 billion years ago marked the emergence of life on our planet. The first forms of life that we know about produced well-preserved microscopic fossils, such as those found in western Australia. These fossils, which are supposedly 3.5 billion years old, resemble cyanobacteria that are modern photosynthetic bacteria. Researchers cannot travel back through time and observe how the first life-forms came into being. However, several hypotheses regarding how life first arose have emerged based on our understanding of how modern life works.

Living cells are complex collections of molecules and macromolecules. DNA stores genetic information, RNA acts as an intermediary in the process of protein synthesis and plays other important roles, while proteins form the foundation for the structure and activities of living cells. Life as we now know it requires this interplay between DNA, RNA, and proteins for its existence and perpetuation. On modern Earth, every living cell is made from a pre-existing cell. But how did life get started?  Living organisms have several characteristics that distinguish them from nonliving materials. Because DNA, RNA, and proteins are the central players in the enterprise of life, scientists who are interested in the origin of life have focused much of their attention on the formation of these macromolecules and their building blocks, namely, nucleotides and amino acids.  Researchers have followed a variety of experimental approaches to determine how life may have begun, including the synthesis of organic molecules in the laboratory without the presence of living cells or cellular material. This work has led researchers to a variety of hypotheses regarding the origin of life. In this chapter, we will consider a few  viewpoints that wrestle with the question, How did life begin?

Were Organic Molecules  Produced Prior to the Existence of Cells ?

One proposed scenario considers how nucleotides and amino acids may have been made prior to the existence of living cells. In the 1920s, the Russian biochemist Alexander Oparin and the Scottish biologist John Haldane independently proposed that organic molecules such as nucleotides and amino acids arose spontaneously under the conditions that occurred on early Earth. According to this hypothesis, the spontaneous appearance of organic molecules produced what they called a “primordial soup,” which eventually gave rise to living cells. It is supposed that the conditions on early Earth, which were much different than today, would have been more conducive to the spontaneous formation of organic molecules. Current hypotheses suggest that organic molecules, and eventually macromolecules, formed spontaneously. This is termed prebiotic (before life) or abiotic (without life) synthesis. These slowly forming organic molecules would have accumulated because there was little free oxygen gas, so they were not spontaneously oxidized, and there were as yet no living organisms, so they were also not metabolized. The slow accumulation of these molecules in the early oceans over a long period of time would have formed what is now called the prebiotic soup. The formation of this medium would have been a key event that preceded the origin of life. The mechanism of how and where these molecules originated is widely debated, but no concrete explanation has been found.  Many intriguing hypotheses have been proposed. Some are mutually exclusive, while some others are not.  A few of the more widely debated ideas are described next.

Based largely on geological data, many scientists in the 1950s proposed that the atmosphere on early Earth was rich in water vapor (H2O), hydrogen gas (H2), methane (CH4), and ammonia (NH3). These components,
along with a lack of atmospheric oxygen (O2), supposedly produced a reducing atmosphere because methane and ammonia readily give up electrons to other molecules, thereby reducing them. Such oxidation-reduction reactions, or redox reactions, are required for the formation of complex organic molecules from simple inorganic molecules. In 1953, Stanley Miller, a student in the laboratory of Harold Urey, was the first scientist to use experimentation to test whether the prebiotic synthesis of organic molecules is possible. His experimental apparatus was intended to simulate the conditions on early Earth that were postulated in the 1950s
(Figure 22.2). 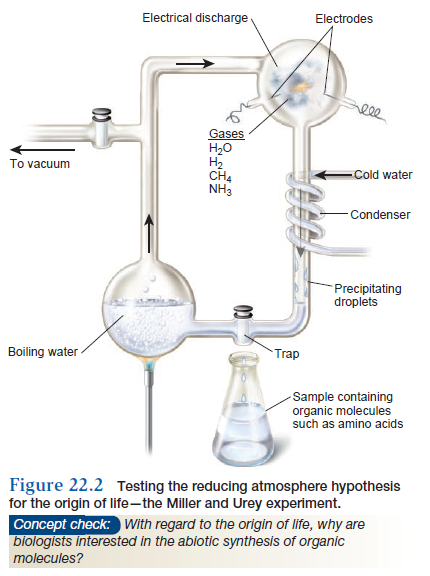 Water vapor from a flask of boiling water rose into another chamber containing hydrogen gas (H2), methane (CH4), and ammonia (NH3). Miller inserted two electrodes that sent electrical discharges into the chamber to simulate lightning bolts. A condenser jacket cooled some of the gases from the chamber, causing droplets to form that dropped into a trap. He then took samples from this trap for chemical analysis. In his first experiments, he observed the formation of hydrogen cyanide (HCN) and formaldehyde (CH2O). Such molecules are precursors of more complex organic molecules. These precursors also combined to make larger molecules such as the amino acid glycine. At the end of 1 week of operation, 10–15% of the carbon had been incorporated into organic compounds. Later experiments by Miller and others demonstrated the formation of sugars, a few types of amino acids, lipids, and nitrogenous bases found in nucleic acids (for example, adenine). Why were these studies important? The work of Miller and Urey was the first attempt to apply scientific experimentation to our quest to understand the origin of life. Their pioneering strategy showed that the prebiotic synthesis of organic molecules is possible, although it could not prove that it really happened that way. In spite of the importance of these studies, critics of the so-called reducing atmosphere hypothesis have argued that Miller and Urey were wrong about the composition of early Earth’s environment. Since the 1950s, ideas about the atmosphere on early Earth have changed. More recently, many scientists have suggested that the atmosphere on early Earth was not reducing, but instead was a neutral environment composed mostly of carbon monoxide (CO), carbon dioxide (CO2), nitrogen gas (N2), and H2O. These newer ideas are derived from studies of volcanic gas, which has much more CO2 and N2 than CH4 and NH3, and from the observation that UV radiation destroys CH4 and NH3, so these molecules would have been short-lived on early Earth. Nevertheless, since the experiments of Urey, many newer investigations have shown that organic molecules can be made under a variety of conditions. For example, organic molecules can be made prebiotically from a neutral environment composed primarily of CO, CO2, N2, and H2O.

Many scientists have argued that sufficient organic carbon would have been present in the materials from asteroids and comets that reached the surface of early Earth in the form of meteorites. A significant proportion of meteorites belong to a class known as carbonaceous chondrites. Such meteorites may contain a substantial amount of organic carbon, including amino acids and nucleic acid bases. Based on this observation, some scientists have postulated that such meteorites could have transported a significant amount of organic molecules to early Earth. Opponents of this hypothesis argue that most of this material would have been destroyed by the intense heating that accompanies the passage of large bodies through the atmosphere and their subsequent collision with the surface of the Earth. Though some organic molecules are known to reach the Earth via such meteorites, the degree to which heat would have destroyed many of the organic molecules remains a matter of controversy.

In 1988, the German lawyer and organic chemist Günter Wächtershäuser proposed that key organic molecules may have originated in deep-sea vents, which are cracks in the Earth’s surface where superheated water rich in metal ions and hydrogen sulfide (H2S) mixes abruptly with cold seawater. These vents release hot gaseous substances from the interior of the Earth at temperatures in excess of 300°C (572°F). Supporters of this hypothesis propose that biologically important molecules may have been formed in the temperature gradient between the extremely hot vent water and the cold water that surrounds the vent (Figure 22.3a). Experimentally, the temperatures within this gradient are known to be suitable for the synthesis of molecules that form components of biological molecules. For example, the reaction between iron and hydrogen sulfide (H2S) yields pyrites and H2, and has been shown to provide the energy necessary for the reduction of N2 to NH3. Nitrogen is an essential component of both nucleic acids and amino acids, the molecular building blocks of life. But N2, which is found abundantly on Earth, is chemically inert, so it is unlikely to have given rise to life. The conversion of N2 to NH3 at deep-sea vents may have led to the production of amino acids and nucleic acids. Interestingly, complex biological communities are found in the vicinity of modern deep-sea vents. Various types of fish, worms, clams, crabs, shrimp, and bacteria are found in significant abundance in those areas (Figure 22.3b). Unlike most other forms of life on our planet, these organisms receive their energy from chemicals in the vent and not from the sun. In 2007, Timothy Kusky and colleagues discovered 1.43 billionyear- old fossils of deep-sea microbes near ancient deep-sea vents. This study provided more evidence that life may have originated on the bottom of the ocean. However, debate continues as to the primary way that organic molecules were made prior to the existence of life on Earth.