Scientists have discovered an ancient animal that carried its young in capsules tethered to the parent's body like tiny, swirling kites. They're naming it after "The Kite Runner," the 2003 bestselling novel. 2

Researchers from Yale, Oxford, the University of Leicester, described the new species in a paper published online the week of April 4 in the journal Proceedings of the National Academy of Sciences.
"Modern crustaceans employ a variety of strategies to protect their eggs and embryos from predators -- attaching them to the limbs, holding them under the carapace, or enclosing them within a special pouch until they are old enough to be released -- but this example is unique," said lead author Derek Briggs, Yale's G. Evelyn Hutchinson Professor of Geology and Geophysics. "Nothing is known today that attaches the young by threads to its upper surface."

The Kite Runner fossil shows 10 juveniles, at different stages of development, connected to the adult. The researchers interpret this to mean that the adult postponed molting until the juveniles were old enough to hatch; otherwise, the juveniles would have been cast aside with the shed exoskeleton.
The adult specimen's head is eyeless and covered by a shield-like structure, according to the researchers. It lived on the sea floor during the Silurian period with a variety of other animals including sponges, brachiopods, worms, snails and other mollusks, a sea spider, a horseshoe crab, various shrimp-like creatures, and a sea star. The juvenile pouches, attached to the adult by slender, flexible threads, look like flattened lemons.
Briggs said he and his colleagues considered the possibility that the juveniles were parasites feeding off a host, but decided it was unlikely because the attachment position would not be favorable for accessing nutrients.

"We have named it after the novel by Khalid Hosseini due to the fancied resemblance of the juveniles to kites," Briggs said. "As the parent moved around, the juveniles would have looked like decorations or kites attached to it. It shows that arthropods evolved a variety of brooding strategies beyond those around today -- perhaps this strategy was less successful and became extinct."
The researchers were able to describe Aquilonifer spinosus in detail thanks to a virtual reconstruction. They reconstructed the animal and the attached juveniles by stacking digital images of fossil surfaces revealed by grinding away the fossil in tiny increments.
Co-authors of the paper were Derek Siveter of the University of Oxford and the Oxford University Museum of Natural History, David Siveter of the University of Leicester, Mark Sutton of Imperial College London, and David Legg of the Oxford University Museum of Natural History.
The Yale Peabody Museum of Natural History, the Natural Environmental Research Council, the John Fell Oxford University Press Fund, and the Leverhulme Trust supported the research.


The ∼ 430-My-old Herefordshire, United Kingdom, Lagerstätte has yielded a diversity of remarkably preserved invertebrates, many of which provide fundamental insights into the evolutionary history and ecology of particular taxa. Here we report a new arthropod with 10 tiny arthropods tethered to its tergites by long individual threads. The head of the host, which is covered by a shield that projects anteriorly, bears a long stout uniramous antenna and achelate limb followed by two biramous appendages. The trunkcomprises 11 segments, all bearing limbs and covered by tergites with long slender lateral spines. A short telson bears long parallel cerci. Our phylogenetic analysis resolves the new arthropod as as tem-group mandibulate. The evidence suggests that the tethered individuals are juveniles and the association represents a complex brooding behavior. Alternative possibilities that the tethered individuals represent a different epizoic or parasitic arthropod appear less likely. 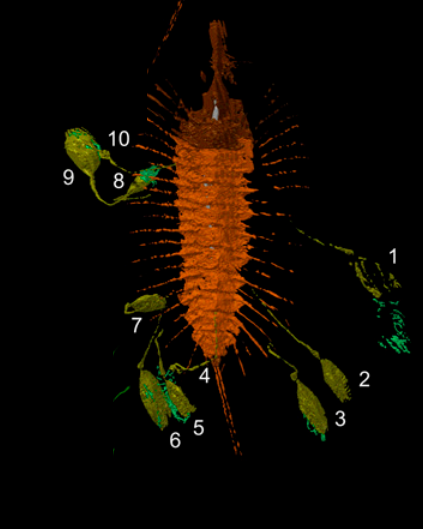 (J) Dorsal view without appendages (stereo pair) with juveniles numbered as referred to in text.
Aquilonifer spinosus, the Kite Runner, was an arthropod that lived supposedly about 430 million years ago. It carried its young in capsules or pouches tethered to its body.

Apart from its unusual morphology, the other remarkable feature of the arthropod is the attachment of multiple individuals to the trunk tergites (Fig. 1 A, D, and J–L). These 10 individuals, which are best seen when the trunk limbs are removed (Fig. 1J), are enumerated clockwise in what follows starting from the anteriormost on the right side (Fig. 1J). They are shaped like flattened lemons. They consist of an outer “shell” (here referred to as a capsule) that does not appear to be calcified. The shell is generally ∼15–20 μm thick where it is thinnest. , the evidence indicates that the attached individuals are arthropods. Arthropods attached by a thread are likely to represent one of three possible strategies: they are either parasites, epizoans, or brooded juveniles. Comparative behaviors are most readily sought among living crustaceans because they are by far the most diverse
group of aquatic arthropods today. The “host” arthropod was clearly living when the capsules became attached: it is unlikely to have tolerated the presence of so many drag-inducing epizoans, and head appendage 1 is long enough to have cleaned the trunk tergites (“general body grooming” as in some living crustaceans) (20). Thus, the attached individuals are more likely to be juveniles.


Tethering of capsule-like structures containing tiny individuals is consistent with a brooding strategy, albeit one with no exact parallel among living arthropods; it would have protected the juveniles from predation by keeping them close to the parent.


Our interpretation of this remarkable specimen as representing 10 juveniles tethered to the parent A. spinosus, combined with its phylogenetic position among early arthropods, indicates that a complexity of brooding strategies evolved early in the history of the group.

» Thousands of New Species Discovered on Tiny Island
» Stentors: The Tiny Giants That Ink Like Squid and Regenerate Like Wolverine
» Science Finds 'Tiny Computers' Embedded In Human Skin
» Is Life Unique?
» Main topics on the origin of eyes