Bioenergetics is central to our understanding of living systems, yet has attracted relatively little attention in origins of life research. This article focuses on energy resources available to drive primitive metabolism and the synthesis of polymers that could be incorporated into molecular systems having properties associated with the living state. The compartmented systems are referred to as protocells, each different from all the rest and representing a kind of natural experiment. The origin of life was marked when a rare few protocells happened to have the ability to capture energy from the environment to initiate catalyzed heterotrophic growth directed by heritable genetic information in the polymers. This article examines potential sources of energy available to protocells, and mechanisms by which the energy could be used to drive polymer synthesis. 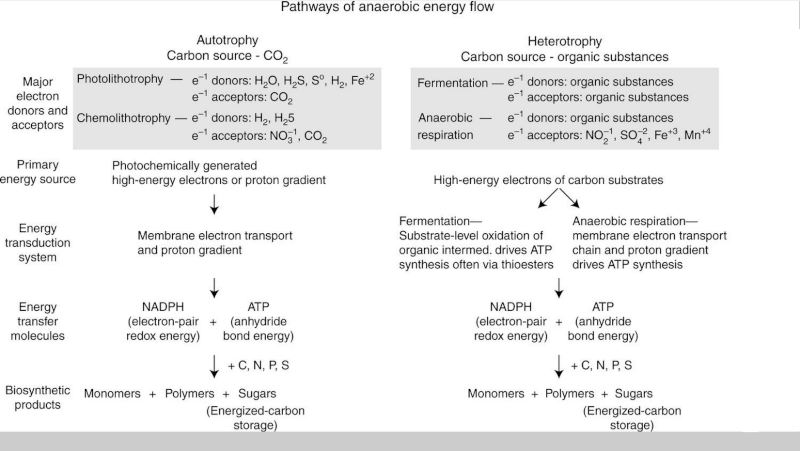 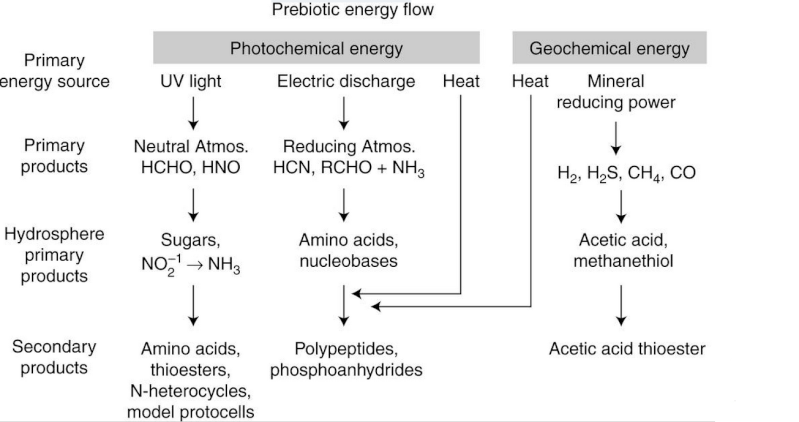 The bioenergetic pathways of contemporary anaerobic life are well understood. As depicted in Figure 1, the light energy captured by photolithotrophs is used to activate and release electrons from inorganic donors like H2S, So, or H2, thereby producing the electrochemical energy that reduces carbon dioxide and yields the organic molecules required by life.

The problem here is, there were no photolitotrophs existing on the early earth.

The next possible source  is a series of relatively low energy reactions that incorporate condensation processes by which monomers are assembled into random polymers. These include anhydrous heat, mineral-catalyzed synthesis, and sugar-driven reactions.

Light energy is by far the most abundant, and in fact photochemistry drives virtually all life today. Could light have been a primary energy source for the first forms of life? This is an obvious possibility, yet there is a major conceptual problem: In modern life, capturing visible light requires a pigment system and a mechanism for transducing the energy content of photons into chemical energy to be used in metabolism, and there is as yet no plausible way to do this in a prebiotic scenario.

Cyanide (HCN) is another common product of UV and electrical energy impinging on mixtures containing nitrogen and gases such as CO and CO2, and cyanide readily reacts with itself to produce other biologically relevant molecules. For instance, a few years after the Miller experiment was published, John Oro (1961) discovered that at high concentration, HCN could undergo pentamerization to form adenine.

Living systems today use chemical reactions to release energy in small steps called metabolism, which can be defined as a series of chemical reactions linked in a molecular system that provides energy and small molecules required for growth. Each step is catalyzed by a specific enzyme, and the reaction rates are controlled by feedback loops in which a product is an allosteric inhibitor of the enzyme to be regulated. If the first life was heterotrophic, what nutrients might have been available as a source of chemical energy?

Life is the harnessing of chemical energy in such a way that the energy-harnessing device makes a copy of itself. This paper outlines an energetically feasible path from a particular inorganic setting for the origin of life to the first free-living cells. The sources of energy available to early organic synthesis, early evolving systems and early cells stand in the foreground, as do the possible mechanisms of their conversion into harnessable chemical energy for synthetic reactions. With regard to the possible temporal sequence of events, we focus on:

(i) alkaline hydrothermal vents as the far-from-equilibrium setting,
(ii) the Wood–Ljungdahl (acetyl-CoA) pathway as the route that could have underpinned carbon assimilation for these processes,
(iii) biochemical divergence, within the naturally formed inorganic compartments at a hydrothermal mound, of geochemically confined replicating entities with a complexity below that of free-living prokaryotes, and (iv) acetogenesis and methanogenesis as the ancestral forms of carbon and energy metabolism in the first free-living ancestors of the eubacteria and archaebacteria, respectively. In terms of the main evolutionary transitions in early bioenergetic evolution, we focus on:
(i) thioester-dependent substrate-level phosphorylations,
(ii) harnessing of naturally existing proton gradients at the vent–ocean interface via the ATP synthase,
(iii) harnessing of Na+ gradients generated by H+/Na+ antiporters,
(iv) flavin-based bifurcation-dependent gradient generation, and finally
(v) quinone-based (and Q-cycle-dependent) proton gradient generation. Of those five transitions, the first four are posited to have taken place at the vent. Ultimately, all of these bioenergetic processes depend, even today, upon CO2 reduction with low-potential ferredoxin (Fd), generated either chemosynthetically or photosynthetically, suggesting a reaction of the type ‘reduced iron → reduced carbon’ at the beginning of bioenergetic evolution.

The origin of life was marked when a rare few protocells happened to have the ability to capture energy from the environment to initiate catalyzed heterotrophic growth directed by heritable genetic information in the polymers.

produce the small molecules of life—amino acids, nucleobases, and amphiphiles

2. How did nature develop multiple semiotic coding systems, including the redundant (surjective) codon-based coding system (for symbolic translation) that involves transcribing, communicating, and translating the symbolic triplet nucleo- tide block-codes into amino acids of the proteins? How did nature develop alter- native generation of such messages using techniques such as overlapping genes, messages within messages, multi-level encryption, and consolidation of dispersed messages? A protein may obtain its consolidated prescriptive construction instructions from multiple genes and/or from the “ junk” DNA, sometimes with over a million nucleotides separating the instructions to be combined.