Defending the Christian Worldview, Creationism, and Intelligent Design » Molecular biology of the cell » The Nuclear Lamins

The type V intermediate filament proteins are the nuclear lamins. These are considered to be nucleoskeletal IF proteins that are determinants of nuclear size, shape, mechanical integrity, and positioning of nuclear pores. They also play important roles in DNA replication, transcription and the disassembly of the nucleus in mitosis and the reassembly of the nucleus in daughter cells.

Lamins are are concentrated in the nuclear lamina. The lamina forms a molecular interface between the inner nuclear envelope membrane and chromatin. In lesser concentrations, the lamins are distributed throughout the nucleoplasm. In humans, there are two major types of lamins: A-type lamins (consisting of lamins A and C), found primarily in differentiated cells, and B-type lamins (lamins B1 and B2) that are found in all nucleated cells.

Lamins have a central rod domain resembling that of cytoskeletal IF proteins, with the exception that there are an additional six heptads in coil 1B. In vitro studies have shown that dimers are the basic building blocks of higher order lamin structures. However , little information is available regarding the precise types of structures lamins form within nuclei. In vitro, however, lamin dimers interact in a head-to-tail fashion to form protofilaments. These protofilaments subsequently aggregate to form paracrystalline arrays. Most lamins are not capable of assembling into 10nm diameter IF in vitro.
Function
Nuclear lamins are involved in a number of essential nuclear functions, including nuclear envelope assembly and disassembly during cell division, DNA synthesis, transcription, and apoptosis. Nuclear lamins have been found to co-localize with DNA synthesis sites. Studies have shown that the addition of dominant-negative mutant lamins to Xenopus nuclei results in co-localization of PCNA and factor C (RFC), two known replication factors, with the lamin aggregates. With the breakdown of the lamina, it was also shown that inhibition of DNA synthesis >95%, implying that lamins are integral to DNA synthesis. Lamins are also believed to regulate transcription. LA and LC bind to transcription factors such as pRB, which binds to LAP2 . Disruption of lamin assembly results in significant inhibition of pol II activity and alteration in the splitting factors B” and Y12’s formations.

Diseases
Many interesting possibilities for lamin functions are being revealed by the recent discoveries showing that a remarkable array of diseases is linked to mutations in human lamin A. To date lamin mutations are responsible for a wide array of diseases. These include Emery–Dreifuss muscular dystrophy (EDMD); dilated cardiomyopathy (DCM); familial partial lipodystrophy (FPLD); mandibuloacral dysplasia (MAD); autosomal recessive Charcot–Marie–Tooth disorder type 2 (AR-CMT2); limb girdle muscular dystrophy 1B (LGMD-1B) and the premature aging diseases Hutchinson-Gilford Progeria Syndrome (HGPS) and atypical forms of Werners Disease . The age of onset and the symptoms of these diseases vary over a wide range, but there are overlapping similarities, including muscle wasting, locomotory problems, fat redistribution, and cardiovascular problems. The nuclei in cells derived from patients with these “laminopathies” are frequently abnormal in shape and numerous components of these diseased nuclei are altered including nuclear pore complexes.

Summary The nuclear envelope consists of an inner and an outer nuclear membrane that are continuous with each other and with the ER membrane, and the space between the inner and outer nuclear membrane is continuous with the ER lumen. RNA molecules, which are made in the nucleus, and ribosomal subunits, which are assembled there, are exported to the cytosol; in contrast, all the proteins that function in the nucleus are synthesized in the cytosol and are then imported. The extensive traffic of materials between the nucleus and cytosol occurs through nuclear pore complexes (NPCs), which provide a direct passageway across the nuclear envelope. Small molecules diffuse passively through the NPCs, but large macromolecules have to be actively transported. Proteins containing nuclear localization signals are actively transported into the nucleus through NPCs, while proteins containing nuclear export signals are transported out of the nucleus to the cytosol. Some proteins, including the nuclear import and export receptors, continually shuttle between the cytosol and nucleus. The monomeric GTPase Ran provides both the free energy and the directionality for nuclear transport. Cells regulate the transport of nuclear proteins and RNA molecules through the NPCs by controlling the access of these molecules to the transport machinery. Newly transcribed messenger RNA and ribosomal RNA are exported from the nucleus as parts of large ribonucleoprotein complexes. Because nuclear localization signals are not removed, nuclear proteins can be imported repeatedly, as is required each time that the nucleus reassembles after mitosis. 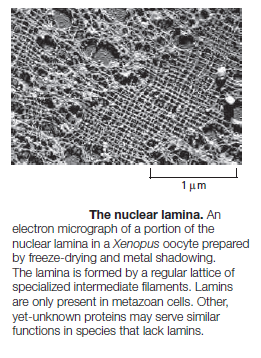 The nuclear lamina, located on the nuclear side of the inner nuclear membrane is a meshwork of interconnected protein subunits called nuclear lamins. The lamins are a special class of intermediate filament proteins  that polymerize into a two-dimensional lattice. The nuclear lamina gives shape and stability to the nuclear envelope, to which it is anchored by attachment to both the NPCs and transmembrane proteins of the inner nuclear membrane. The lamina also interacts directly with chromatin, which itself interacts with transmembrane proteins of the inner nuclear membrane. Together with the lamina, these inner membrane proteins provide structural links between the DNA and the nuclear envelope. When a nucleus is dismantled during mitosis, the NPCs and nuclear lamina disassemble and the nuclear envelope fragments. The dismantling process is at least partly a consequence of direct phosphorylation of nucleoporins and lamins by the cyclin-dependent protein kinase (Cdk) that is activated at the onset of mitosis . During this process, some NPC proteins become bound to nuclear import receptors, which play an important part in the reassembly of NPCs at the end of mitosis. Nuclear envelope membrane proteins—no longer tethered to the pore complexes, lamina, or chromatin—disperse throughout the ER membrane. The dynein motor protein, which moves along microtubules , actively participates in tearing the nuclear envelope off the chromatin. Together, these processes break down the barriers that normally separate the nucleus and cytosol, and the nuclear proteins that are not bound to membranes or chromosomes intermix completely with the proteins of the cytosol 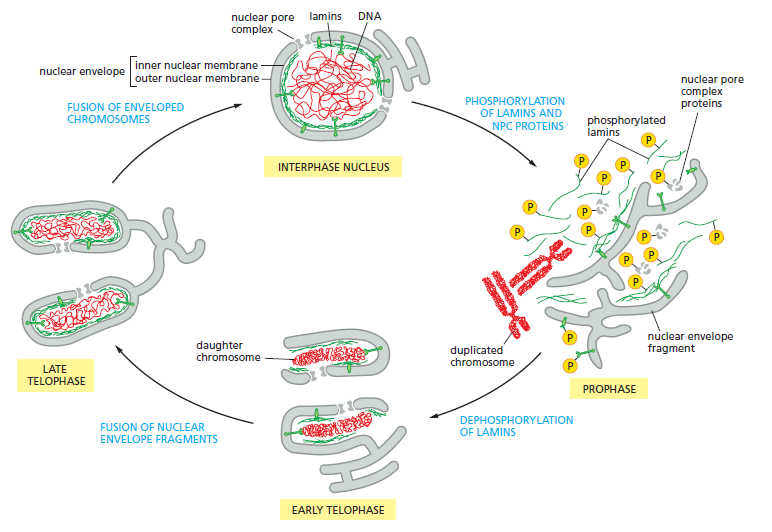 Later in mitosis, the nuclear envelope reassembles on the surface of the daughter chromosomes. In addition to its crucial role in nuclear transport, the Ran GTPase also acts as a positional marker for chromatin during cell division, when the nuclear and cytosolic components intermix. Because Ran-GEF remains bound to chromatin when the nuclear envelope breaks down, Ran molecules close to chromatin are mainly in their GTP-bound conformation. By contrast, Ran molecules further away have a high likelihood of encountering Ran-GAP, which is distributed throughout the cytosol; these Ran molecules are mainly in their GDP-bound conformation. As a result, the chromosomes in mitotic cells are surrounded by a cloud of Ran-GTP. Ran-GTP releases the NPC proteins in proximity to the chromosomes from nuclear import receptors. The free NPC proteins attach to the chromosome surface, where they assemble into new NPCs. At the same time, inner nuclear membrane proteins and dephosphorylated lamins bind again to chromatin. ER membranes wrap around groups of chromosomes until they form a sealed nuclear envelope. During this process, the NPCs start actively re-importing proteins that contain nuclear localization signals. Because the nuclear envelope is initially closely applied to the surface of the chromosomes, the newly formed nucleus excludes all proteins except those initially bound to the mitotic chromosomes and those that are selectively imported through NPCs. In this way, all other large proteins, including ribosomes, are kept out of the newly assembled nucleus. The cloud of Ran-GTP surrounding chromatin is also important in assembling the mitotic spindle in a dividing cell.

A growing number of nuclear proteins are known to bind lamins and are implicated in both nuclear and cytoskeletal organization, mechanical stability, chromatin organization, signaling, gene regulation, genome stability, and cell differentiation. Recent studies reveal the organization of the lamin filament meshwork in somatic cells where they assemble as tetramers in cross-section of the filaments.

Lamins form a filamentous meshwork below the inner nuclear membrane (grey) and are in close contact with chromatin (cyan). A-type (yellow) and B-type (purple) lamins form separate meshworks and are connected to nuclear pore complexes (blue). Ig-folds are shown in orange. 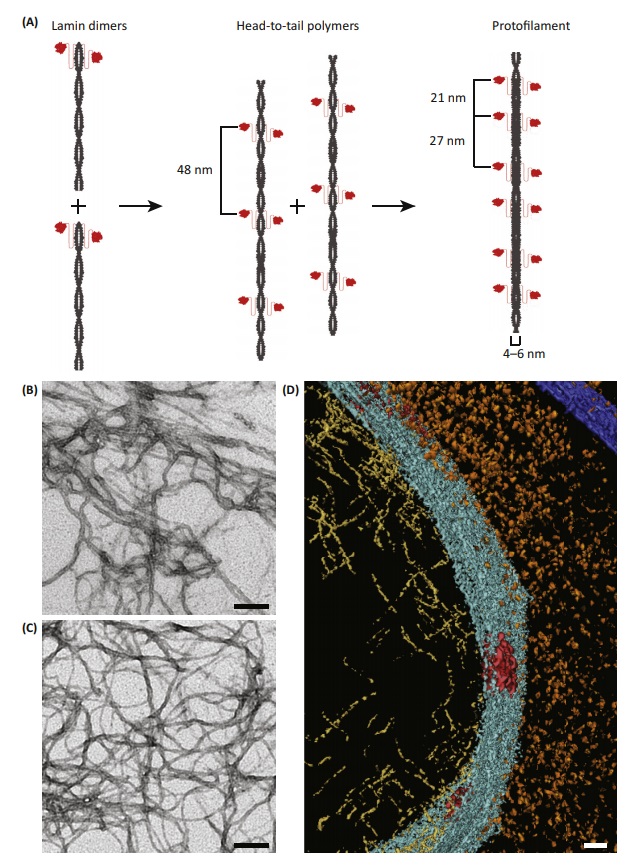 Re: The Nuclear Lamins

Defending the Christian Worldview, Creationism, and Intelligent Design » Molecular biology of the cell » The Nuclear Lamins

» Fine-tuning of the fundamental forces of the universe to permit life
» Nuclear pore complexes. Design, or evolution ?
» Nuclear Envelope Dynamics in Drosophila Pronuclear Formation and in Embryos
» Chromatin dance in the nucleus through extensile motors contribute to another higher order, promoting gene regulation and expression. Design, or evolution?