Defending the Christian Worlview, Creationism, and Intelligent Design » Molecular biology of the cell » Metabolism » The origin of metabolism is a major gap in our understanding of the emergence of life.

The origin of metabolism is a major gap in our understanding of the emergence of life.

At some point in the history of life on Earth, prebiological chemistry became biological chemistry. 1 We know a great deal about the metabolic basis of life on Earth today, although details continue to emerge from active research. In contrast, our understanding of the transition that must have occurred between purely abiotic chemistry and a chemical system (or systems) of sufficient complexity and novelty to be considered metabolically biological is sorely lacking. One of the first scientists to ponder this question, at least in print, was the biochemist Norman Horowitz. In 1945, he proposed a general scenario in which a primitive metabolic system on the early Earth initially used only those abiotically produced organic compounds that were available in its environment. As abiotic production diminished and each of those compounds became depleted, the system began to accumulate their immediate chemical precursors and then to evolve catalytic capabilities for converting those precursors into the needed compounds. In this way, Horowitz imagined that metabolic pathways evolved in reverse, from end products back to the initial precursors used in modern metabolism. Our understanding of metabolism today is orders of magnitude greater than that in 1945. We realize now that the origin of biological metabolism, on the early Earth or in an extraterrestrial environment, must have been more complicated and convoluted than Horowitz’s scheme. To begin to piece together plausible scenarios for this transition, we must first look at the flow of mass and energy through contemporary biochemical systems and the catalysts and accessory compounds that enable this flow. We can then try to use the components of metabolism that are common to all life on Earth today to infer the metabolic pathways and components that existed in the last common ancestor of life on Earth. From there, we can begin to at least speculate about the composition of the first metabolic systems on Earth and how those putative systems fit into various models of prebiotic chemistry that have been proposed. Finally, we can try to use our understanding of past and present metabolism on Earth as a guide in the search for life elsewhere in the universe.

Logic of Central Metabolism
In general, each metabolic pathway functions primarily in either catabolism or anabolism (Figure 6.1). 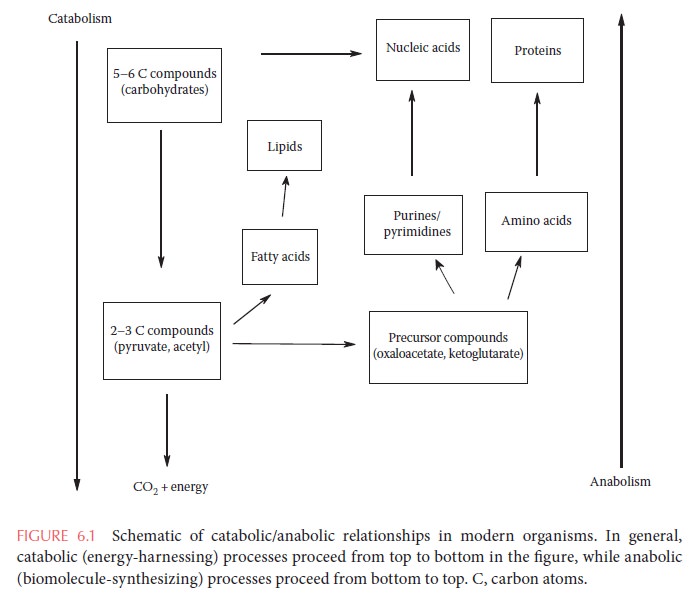 Catabolism is the breakdown of energy-containing molecules in order to convert that energy into a form that can be used for biological processes. Catabolic metabolism generally involves the use of many different related nutrient molecules, which are broken down into a relatively small number of intermediate products. Anabolism is the use of catabolic products for the synthesis of biomolecules such as amino acids, nucleic acid bases, and lipids. Anabolic pathways generally take a small number of building blocks, many of them products of catabolism, and assemble them into a wide variety of biomolecules. Some metabolic pathways, such as the tricarboxylic acid (TCA) cycle, are amphibolic, meaning they have both catabolic and anabolic functions. In general, catabolic pathways are exergonic (net release of energy) while anabolic pathways are endergonic (net consumption of energy). The chemical energy of nutrient molecules is transferred by catabolic pathways to a set of energy carriers.

Some of these are metabolic intermediates themselves, while others are strictly carriers that are recycled constantly and reused. These carriers then make possible the energy-consuming anabolic processes of biosynthesis. The most common intermediate energy carrier is adenosine triphosphate, or ATP. The phosphodiester bond of the terminal phosphate group in ATP can be hydrolyzed to yield over 30 kJ/mol of free energy. Other phosphorylated intermediates such as phosphoenolpyruvate and 1,3-bisphosphoglycerate can also carry energy via phosphoester bonds. Oxidation–reduction (redox) cofactors such as nicotinamide adenine dinucleotide (NADH) and flavin adenine dinucleotide (FADH2) carry reducing power (i.e., extra electrons), which is another intermediate form of chemical energy.

Both catabolism and anabolism use primarily two-carbon units. The major reason for this lies in the chemistry of carbon-containing compounds. It is mechanistically rather difficult, although not impossible, to form a carbon–carbon bond between 2 one-carbon molecules such as carbon dioxide (CO2), carbon monoxide (CO), or methane (CH4). With a two-carbon unit, on the other hand, one of the carbons can be oxidized to a keto (C=O) group, which is
susceptible to nucleophilic attack by another sufficiently activated carbon, forming a C-C bond. It is also easier to break a long hydrocarbon chain into two-carbon units than one carbon units. By oxidizing alternating carbons to keto groups, β-keto structures can be formed, which are relatively labile to C-C bond breakage. This breakage results in an acetyl (CH3C=O) group, which can be transferred to carrier molecules with compatible functional groups, such as thiol (-SH) and amino (-NH2) groups, to form esters or amides.


Catalysts and Cofactors: The Tools of Metabolism
A catalyst is a substance that increases the rate of a chemical reaction without being consumed in the process. Metabolism requires catalysts, because many catabolic and anabolic reactions have very slow reaction rates under biological conditions. These catalysts are protein (for the most part) enzymes, which are composed of linear chains of amino acids, molecules containing both carboxylic acid (-COOH) and amino (-NH3) groups. The sequence of these amino acids is encoded in the genome of the organism. Some of these amino acids have reactive functional groups that participate in the catalytic mechanism of the enzyme. Others are relatively inert and serve mostly structural purposes. All known enzymes can be grouped into one of six major classes, depending on the type of chemical reaction they catalyze (Table 6.1). 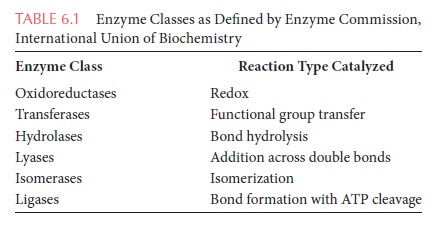 Many metabolic enzymes require nonprotein molecules known as coenzymes or cofactors. These molecules are either synthesized by other enzymes also encoded in the genome or taken up from the organism’s environment or food sources (the latter are known as vitamins). The major role of coenzymes is to provide chemical functional groups that the 20 amino acids encoded by the genetic code do not possess. These functional groups are mainly involved in the transfer of other functional groups, or of electrons, between substrate and product molecules (Table 6.2).

The origin of metabolism is a major gap in our understanding of the emergence of life.

"If you look at many different organisms from around the world, this network of reactions always looks very similar, suggesting that it must have come into place very early on in evolution, but no one knew precisely when or how," says Ralser

One theory is that RNA was the first building block of life because it helps to produce the enzymes that could catalyse complex sequences of reactions. Another possibility is that metabolism came first; perhaps even generating the molecules needed to make RNA, and that cells later incorporated these processes – but there was little evidence to support this.

Ralser's team took early ocean solutions and added substances known to be starting points for modern metabolic pathways, before heating the samples to between 50 ˚C and 70 ˚C – the sort of temperatures you might have found near a hydrothermal vent – for 5 hours. Ralser then analysed the solutions to see what molecules were present.

"In the beginning we had hoped to find one reaction or two maybe, but the results were amazing," says Ralser. "We could reconstruct two metabolic pathways almost entirely."

The pathways they detected were glycolysis and the pentose phosphate pathway, "reactions that form the core metabolic backbone of every living cell," Ralser adds. Together these pathways produce some of the most important materials in modern cells, including ATP – the molecule cells use to drive their machinery, the sugars that form DNA and RNA, and the molecules needed to make fats and proteins.

Detecting the metabolite ribose 5-phosphate is particularly noteworthy, Ralser says. This is because it is a precursor to RNA, which encodes information, catalyses chemical reactions and most importantly of all, can replicate.

A related issue is that the reactions observed so far only go in one direction; from complex sugars to simpler molecules like pyruvate. "Given the data, one might well conclude that any organics in the ocean would have been totally degraded, rather than forming the basis of modern metabolism," says Jack Szostak, who studies the origin of life at Harvard. "I would conclude that metabolism had to evolve, within cells, one reaction and one catalyst at a time."

But Ralser disagrees. In his opinion, whether the reaction is catalysed by an enzyme or by a molecule in the Archean Ocean leads to the same result; "every chemical reaction is in principle reversible, whether an enzyme or a simple molecule is the catalyst," he says.

It is not conceivable that highly complex molecules such as chlorophylls were synthesized by prebiotic chemistry, given their very specific functional groups and multiple chiral centers. Instead, they are the end product of a progressive evolutionary development, in which simple molecules are the start of the biosynthesis chain and are then progressively elaborated in later steps. In this view, each intermediate in the modern pathway was at some point the end point in the pathway. This requires that each intermediate in the modern pathway be usable in the past as an end product. In the case of chlorophyll biosynthesis, Granick proposed that simple porphyrins or porphyrin precursors were the starting points, and that successive steps were added to improve the efficiency of the pigments or to extend light absorption into new spectral ranges. This is an appealing
idea and is probably at least partially true. The Granick hypothesis in the context of photosynthesis has been championed by Mauzerall (1992), as well as embraced by others (Olson and Pierson, 1987; Olson, 1999, 2006).

This is about the best explanation that proponents of naturalistic origins can come up with. All it exemplifies is baseless just so assertions in a superficial manner. Pseudo science at its best. It should be clear to any honest thinker that there is a hudge gap of explanatory power between proponents of naturalism, and design.

A third possible mechanism for the origin and evolution ofmetabolic pathways is the patchwork, or gene recruitment, hypothesis, as shown in Fig. 12.5c (Jensen, 1976). The basic idea is that new pathways are formed by recruiting genes that evolved earlier for another pathway. The newly formed pathway is therefore a patchwork, or mosaic, of steps borrowed fromother sources,which were then adapted to their new function by mutation of the genes that code for the proteins.

This raises the question obviously, what was the mechanism for the FIRST metabolic pathways. The problem will remain the same just more behind in the timeline.....

This requires that the gene first be duplicated and that one copy be used for its original function, while the other can then be modified and optimized for the new pathway.

Defending the Christian Worlview, Creationism, and Intelligent Design » Molecular biology of the cell » Metabolism » The origin of metabolism is a major gap in our understanding of the emergence of life.