Defending the Christian Worldview, Creationism, and Intelligent Design » Origin of life » The RNA & DNA World » The impossibility of formation of RNA in a prebiotic world

The impossibility of formation of RNA in a prebiotic world 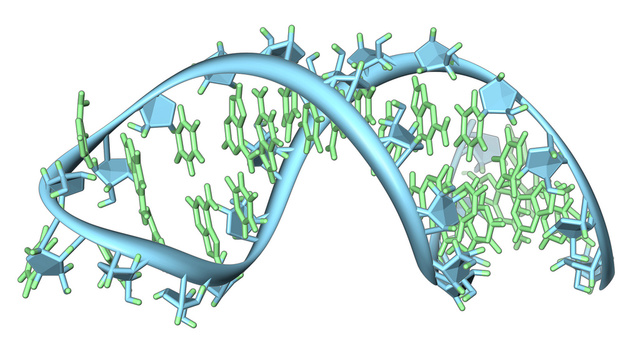 The spontaneous formation of RNA building blocks is seen as a crucial step in the origin of life, but one that scientists have struggled with for decades. 1

Postulate 1: There was a prebiotic pool of beta-D-ribonucleotides.   1

Beta-D-ribonucleotides  are compounds made up of a purine (adenine or guanine) or a pyrimidine (uracil or cytosine) linked to the 1'-position of ribose in the beta-configuration.

There is, in addition, a phosphate group attached to the 5'-position of the ribose. For the four different ribonucleotides in this prebiotic scenario, there would be hundreds of other possible isomers.

But each of these four ribonucleotides is built up of three components: a purine or pyrimidine, a sugar (ribose), and phosphate. It is highly unlikely that any of the necessary subunits would have accumulated in any more than trace amounts on the primitive Earth. Consider ribose. The proposed prebiotic pathway leading to this sugar, the formose reaction, is especially problematic.

Many accounts of the origin of life assume that the spontaneous synthesis of a self-replicating nucleic acid could take place readily. Serious chemical obstacles exist, however, which make such an event extremely improbable. Prebiotic syntheses of adenine from HCN, of D,L-ribose from adenosine, and of adenosine from adenine and D-ribose have in fact been demonstrated. However, these procedures use pure starting materials, afford poor yields, and are run under conditions which are not compatible with one another. Any nucleic acid components which were formed on the primitive earth would tend to hydrolyze by a number of pathways. Their polymerization would be inhibited by the presence of vast numbers of related substances which would react preferentially with them. It appears likely that nucleic acids were not formed by prebiotic routes

The nitrogenous substances react with formaldehyde, the intermediates in the pathways to sugars, and with sugars themselves to form non-biological materials10. Furthermore, as Stanley Miller and his colleagues recently reported, "ribose and other sugars have surprisingly short half-lives for decomposition at neutral pH, making it very unlikely that sugars were available as prebiotic reagents."

Or consider adenine. Reaction pathways proposed for the prebiotic synthesis of this building block start with HCN in alkaline (pH 9.2) solutions of NH4OH.12 These reactions give small yields of adenine (e.g., 0.04%) and other nitrogenous bases provided the HCN concentration is greater than 0.01 M. However, the reaction mixtures contain a great variety of nitrogenous substances that would interfere with the formose reaction. Therefore, the conditions proposed for the prebiotic synthesis of purines and pyrimidines are clearly incompatible with those proposed for the synthesis of ribose. Moreover, adenine is susceptible to deamination and ring-opening reactions (with half-lives of about 80 years and 200 years respectively at 37º C and neutral pH), making its prebiotic accumulation highly improbable. This makes it difficult to see how any appreciable quantities of nucleosides and nucleotides could have accumulated on the primitive Earth. If the key components of nucleotides (the correct purines and pyrimidines, ribose, and phosphate) were not present, the possibility of obtaining a pool of the four beta-D-ribonucleotides with correct linkages would be remote indeed.

If this postulate, the first and most crucial assumption, is not valid, however, then the entire hypothesis of an RNA World formed by natural processes becomes meaningless.

Each of the four ribonucleotides is built up of three components: a purine or pyrimidine, a sugar (ribose) and phosphate. It is exceptionally improbable that any of these subunits could have accumulated in any more than trace amounts on the early earth. The suggested prebiotic pathway leading to ribose, for instance, is very problematic. The reaction does not proceed if the reaction mixture includes the various nitrogenous substances thought to have been present in the primordial oceans. These nitrogenous substances react with formaldehyde, as well as the intermediates involved in the pathways to the various sugars, and indeed the sugars themselves to form non-biological materials. Moreover, ribose has an extremely short half-life for decomposition at neutral pH, making it highly unlikely that the sugars were available as prebiotic reagents.

Reaction pathways proposed for the synthesis of adenine start with HCN in alkaline solutions of NH4OH. The reactions yield small amounts of adenine and other nitrogenous bases (provided the HCN concentration is greater than 0.01 M. The reaction mixtures, however, contain a large variety of nitrogenous substances that would interfere with the formose reaction. Thus, the conditions suggested for the formation of purines and pyrimidines are not compatible with those proposed for the formation of the sugar ribose. Adenine is also highly susceptible to deamination and ring-opening reactions making its prebiotic accumulation extremely unlikely. It seems unlikely, therefore, that substantial quantities of nucleotides and nucleosides could have been formed and have accumulated on the early earth. If the key components of nucleotides were not present, the possibility of obtaining the desired pool of the four beta-D-ribonucleotides with correct linkages would be very remote indeed.

If there was not, in fact, a prebiotic pool of beta-D-ribonucleotides (as is required by the RNA world model), then the entire hypothesis of an RNA world formed by natural processes is invalid.

nucleotides do not link unless there is some type of activation of the phosphate group. The only effective activating groups for the nucleotide phosphate group (imidazolides, etc.), however, are those that are totally implausible in any prebiotic scenario. In living organisms today, adenosine-5'-triphosphate (ATP) is used for activation of nucleoside phosphate groups, but ATP would not be available for prebiotic syntheses. Joyce and Orgel note the possible use of minerals for polymerization reactions, but then express their doubts about this possibility


Even waiving these obstacles, and allowing for minute amounts of oligoribonucleotides, these molecules would have been rendered ineffective at various stages in their growth by adding incorrect nucleotides, or by reacting with the myriads of other substances likely to have been present. Moreover, the RNA molecules would have been continuously degraded by spontaneous hydrolysis and other destructive processes operating on the primitive Earth.


RNA ON THE EARLY EARTH

According to the RNA World Hypothesis, RNA was a key molecule that was utilized by the earliest life on Earth to store genetic information and to catalyze chemical reactions.  This raises the question, however, of how RNA formed under prebiotic conditions on the early Earth.  In fact, the issue of the complete synthesis of RNA nucleotides has been a major stumbling block for the RNA World Hypothesis.  The sugar found in the backbone of both DNA and RNA, ribose, has been particularly problematic, as the most prebiotically plausible chemical reaction schemes have typically yielded only a small amount of ribose mixed with a diverse assortment of other sugar molecules.

These difficulties have led some scientists to hypothesize that RNA was preceded by other RNA-like molecules that were more stable and readily synthesized under prebiotic conditions. Based on analyses of meteorites, such as the Murchison meteorite, other scientists contest that some components of RNA may have formed in space and arrived on Earth rather than being formed de novo on the Earth.

We present two specific difficulties that face the de novo synthesis of RNA-like polymers in a prebiotic (enzyme-free) environment: nucleoside base selection and intramolecular strand cyclization. These two problems are inherent to the assumption that RNA formed de novo from pre-existing, chemically-activated mononucleotides in solution. 4

Scientists have proposed different scenarios to explain the origin of life but these are still unresolved. There are many problems and questions concerning the origin of life including the synthesis of simple biomolecules such as amino acids, simple sugars, and nitrogen bases etc.  5

The reaction given above is thermodynamically unfavorable. This is because this process is trying to ―pull out‖ water into the aqueous environment, thus making phosphorylation extremely challenging and with low efficiency. This is a major reason why the phosphorylation process has been a challenge in prebiotic chemistry. The major challenging aspects include a common route to synthesize significant biological P compounds with good yields and with conditions relevant to the Hadean Earth and in the presence of water.

Defending the Christian Worldview, Creationism, and Intelligent Design » Origin of life » The RNA & DNA World » The impossibility of formation of RNA in a prebiotic world

» The DNA double helix - evidence of design
» RNA & DNA: It's prebiotic synthesis: Impossible !!
» Where did Glucose come from in a prebiotic world ?
» The RNA world, and the origins of life
» The practical impossibility of atheism