Either the cosmos
(1) had no beginning, or
(2) it had a beginning.
(1) If the cosmos had no beginning, then there must be an infinite series of past events. However, it is impossible to traverse an actual infinite. Therefore, the universe cannot be infinitely old. Besides that, If the cosmos was infinitely old, it would have reached maximum entropy a long, long, time ago. Since it has not reached maximum entropy, it cannot be infinitely old without violating the second law of thermodynamics.
(2) If the cosmos had a beginning, then it must have come from (A) nothing or (B) something.
2.A. Although physicists such as Krauss and Hawking talk about "the universe creating itself from nothing," they are using the word "nothing" to mean the vacuum energy, which is not a true nothing. To be more precise, being cannot emerge from non-being.
2.B. If the entire cosmos came from something, that thing must transcend our cosmos, that is, it must exist beyond the limits of our space/time continuum. We may call it the First Cause.

There are things that come into existence.
Everything that begins to exist is caused to come into being by something else.
There can not be an endless series of past causes.
You cannot reach now by making one addition to time after another from eternity.
Nor can something come to exist from absolutely nothing
Therefore there is a necessary first cause that did not come into existence.
In other words, the first cause has always existed.


To summarize, the First Cause is the self-existent source of all other existence. And that is almost exactly what every major theistic tradition on earth calls God.

STEP 1:  If something exists, then something is eternal in the past without true beginning, or something came from absolutely nothing (AN).

Surely no one seeking real truth would accept a absolutely nothing hypothesis.

A. We have absolutely no reason to believe that AN has ever existed in the past or that it could ever be achieved.
B. AN has no creative powers and potentiality. This means AN cannot create or be the cause of anything, since its the absence of any thing.
C. AN cannot be Discriminatory - If something can come from AN then everything can.
D. Certain mathematical absolutes cannot be undermined. 0+0 always equals 0.
E. There is NO EVIDENCE, scientific or otherwise, which supports the claim that something can in fact come from AN. All the evidence points to the contrary view.
F. It would break the law of cause and effect. (http://en.wikipedia.org/wiki/Causality)
G. It would break the law of uniformity. (http://en.wikipedia.org/wiki/Uniformitarianism)
H. AN has no limiting boundaries, so not only would everything be able to come from AN (c), but it would be able to do so ALL the time!!

STEP 2: The universe had a beginning

Two cosmologists, Audrey Mithani and Alexander Vilenkin both from Tufts University in Massachusetts, have stuck their necks out with a  mathematical paper that considers the mathematics of eternity. In it, they take a close look at the concept of a universe that has no beginning or end.

Currently, there are two main descriptions of the universe's existence that suggest that the universe is eternally old—without a Big Bang. The first is the eternal inflation model, in which different parts of the universe expand and contract at different rates. Then, there's the idea of an emergent universe—one which exists as a kind of seed for eternity and then suddenly expands into life.

Thing is, it turns out that the idea of an eternal universes can only allow certain types of universe expansion to occur—and then they go on to show that the current inflation models that have been suggested have to have a begining. Needles to say, some of the math in their paper is pretty complex—you can read it here, though, if you'd like—but they manage to sum the whole thing up rather neatly:

"Although inflation may be eternal in the future, it cannot be extended indefinitely to the past."

They also manage to scupper the idea that an emergent model of the universe can't stretch back eternally—but they choose to do that using quantum mechanics. Agains, neatly summing it up, they say:

Basically, they've taken aim at the two current models of the universe that asume it's eternally old, and conclude that "none of these scenarios can actually be past-eternal." Which means the universe definitely had a beginning.

STEP 3: Whatever existed in the past without beginning must be spaceless and timeless.  Infinite regress is impossible. Why ?

STEP 4: Whatever existed in the past without beginning must also be personal.  The truth is that we know the event (the creation of the universe) must have been beyond space and time.

The cause of the Big Bang operated at to, that is, simultaneously (or coincidentally) with the Big Bang. Philosophical discussions of causal directionality routinely treat simultaneous causation, the question being how to distinguish A as the cause and B as the effect when these occur together at the same time [Dummett and Flew (1954); Mackie (1966); Suchting (1968-69); Brier (1974), pp. 91-98; Brand (1979)].{2} Even on a mundane level, we regularly experience simultaneous causation;

Therefore it cannot be physical or material. There are only two types of things that fit this description. Either abstract objects (like numbers), or some sort of intelligent mind…But we know abstract objects don’t stand in causal relations and are causally impotent. Therefore the transcendent cause of the origin of the universe, must be an unembodied, personal, space-less, immaterial, timeless, intelligent mind. Secondly, only a free agent can account for the origin of a temporal effect from a timeless cause. If the cause of the universe were an non-personal, mechanically operating cause, then the cause could never exist without its effect. For if the sufficient condition of the effect is given, then the effect must be given as well. The only way for the cause to be timeless, but for its effect to begin in time, is for the cause to be a PERSONAL agent who freely chooses to create an effect in time, without any antecedent determining conditions. One of the main questions we frequently ask is how could a timeless, non-personal cause give rise to a temporal effect like the universe? You see, if the cause were a non-personal set of necessary and sufficient conditions, then the cause could never exist without its effect... If the cause were permanently present without beginning, then the effect would be permanently present as well. And finally, since GOD would be the personal uncaused first cause, he is self-directed and self-motivated, and acted volitionally…If the cause were not personal  it would not be capable of self-directed, self-motivated, volitional action. Preventing it from being the first cause.

STEP 5: A supernatural, timeless, immaterial, personal, eternal, uncreated creator must be responsible for the existence of the universe.


the 19th-century English philosopher and sociologist Herbert Spencer wrote that, as regards the origin of the universe, three hypotheses are possible: self-existence (atheism), self-creation (pantheism), or creation by an external agency (theism). Spencer argued that it is "impossible to avoid making the assumption of self-existence" in any of the three hypotheses, and concluded that "even positive Atheism comes within the definition" of religion. 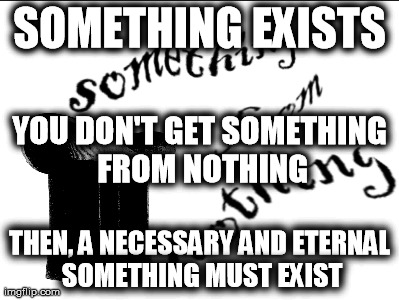 Everything that exists does so either by the necessity of its own nature or in an external explanation.

Everything that exists is either 1 ) an illusion 2 ) self-created 3 ) self-existent or 4 ) created by a self-existent.

Everyone has what they believe to be a conclusive test for truth, but if their convludive test self destructs they can not know anything for sure.

If their test fails and they borrow from another worldview they are just playing the hypocrite.

Every thought must have an ultimate authority or foundation on which it rests.

(2) Since Absolutely Nothing never existed, there was always a time when there was something in existence. This something we can call the Eternal Something. The Eternal Something has no beginning and no end, has no needs that It Itself cannot meet, can do whatever is possible that can be done, and will always be superior to anything It produces.

Re: Easy Steps to refute naturalism