Defending the Christian Worldview, Creationism, and Intelligent Design » The catalog of life » Ants, and suicide bombers

The argument of the ant’s life
1. Pheromone is a chemical substance produced and released into the environment by an animal, especially a mammal or an insect, affecting the behavior or physiology of others of its species. For example ants use pheromones to leave chemical trails that can be followed by other members and to also identify which nest an ant is from, along with its social status in the colony.
2. Studying European ants scientists now found that they have “a specialized appendage on their abdomen that it strokes with its hind legs to create sound signals. Other ants can detect and process these signals, resulting in various complex social responses that are key to survival of the colony.”
3, Thirdly, it is now also discovered that the developing larvae back in the nest also use this technique, which is important for the ant colony's survival.
4. In short, all the ants would die in one generation if you remove any one of these features:
a) early maturing abdominal acoustic appendage,
b) instinct to "strum" it,
c) sensors in adults to detect it,
d) ant brains to interpret the sounds, and
e) the instinct to protect the mature larvae.
5. All these necessary complex features of the ants are proof of an intelligent design which could not happen without designer or by chance.
6. Evolution is also impossible because if all these features just partially developed this would either harm the survival of the ants or make it impossible that they come to exist.
7. A designer was a must and all men call him God.
8. God exists. 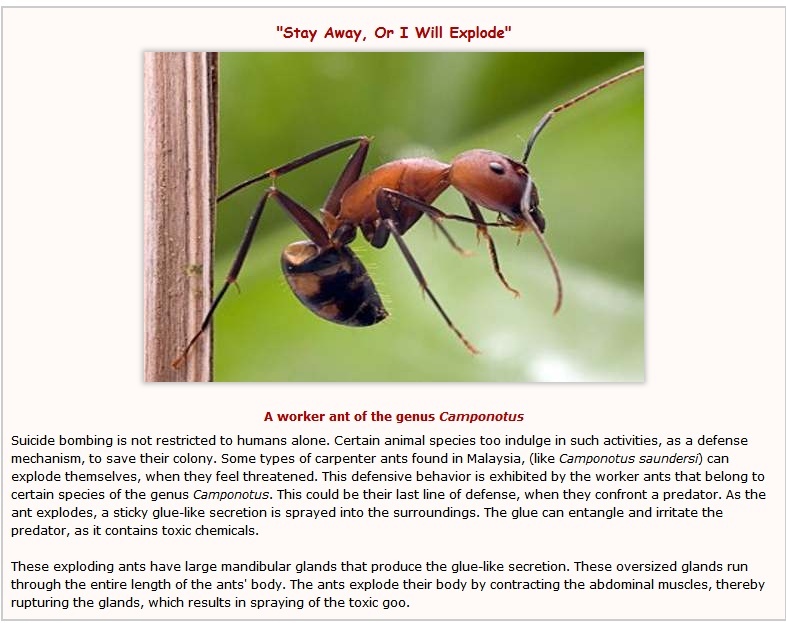 These ants are anatomically and behaviourally programmed to be walking bombs. Two huge glands, filled with toxic secretions, run from the bases of the mandibles all the way to the posterior tip of the body. When the ants are pressed hard during combat, either by enemy ants or an attacking predator, they contract their abdominal muscles violently, bursting open the body wall and spraying the secretion onto the foe (O.Wilson Journey to the Ants, p.70).

There are heaps of examples of Ants and other animals sacrificing themselves, which cannot be explained by Darwinism.

Defending the Christian Worldview, Creationism, and Intelligent Design » The catalog of life » Ants, and suicide bombers