Why is the Moon exactly the same apparent size from Earth as the Sun? Surely this cannot be just coincidence; the odds against such a perfect match are enormous.
http://www.astronomy.com/magazine/ask-astro/2000/10/why-is-the-moon-exactly-the-same-apparent-size-from-earth-as-the-sun-surely-this-cannot-be-just-coincidence-the-odds-against-such-a-perfect-match-are-enormous

Cosmic Lottery
The Moon and the Sun constitute further proof we passengers on spaceship Earth are winners. There is nothing in physics that says the Moon and Sun must appear the same size in our skies. In fact, our Moon is the only satellite in our system that even comes close to doing this. It is truly amazing that the Moon and Sun discs match up—and they won’t forever as the Moon is slowly moving away from the Earth. We won the cosmic lottery again! A look at any total solar eclipse is proof of the astronomically unlikely situation that the Sun is 400 times larger than the Moon and 400 times farther away from Earth than the Moon. 1 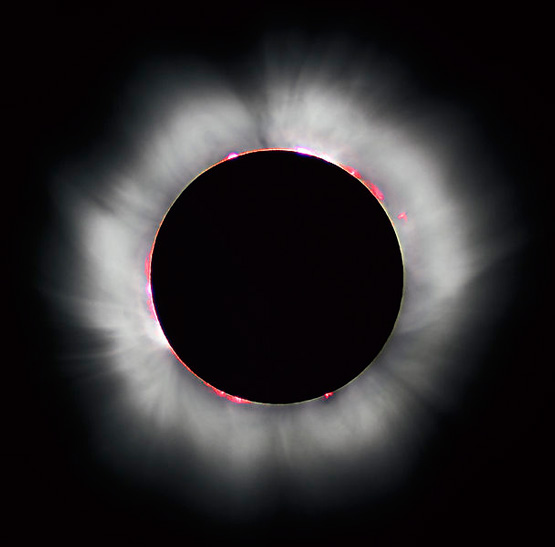 During one orbit around the Sun, Earth actually rotates about its own axis 366.3 times. The Moon orbits the Earth in 27.3 days. Of course a day is one Earth rotation on its own axis.

How can it be that the Earth and Moon are in a reciprocal mathematical relationship in terms of number of rotations and in the pure ratios of diameters? Nothing in physics says this need be so.   The product of these rotations, 27.3 x 366.3 = 9999.99. What are the chances? I can’t begin to calculate the astronomical odds against such a numeric symmetry if our planet and its natural satellite were formed by random processes. Note that this product is independent of units and calculated solely on number of Earth rotations relative to our Moon and Sun. 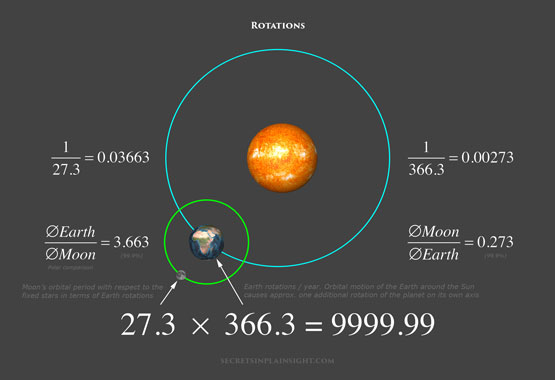 “It is the mark of an instructed mind to rest satisfied with the degree of precision which the nature of the subject admits and not to seek exactness when only an approximation of the truth is possible.” -Aristotle 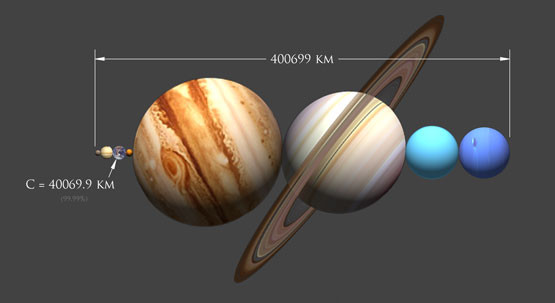 The following equation also reveals something about the unexpected perfection of the Earth-Moon system:

Ashley Moore Wills:  So, a Mars-sized body struck the Earth billions of years ago and that formed our Moon!?! The Moon just happens to be the same diameter as the Sun when viewed from Earth, (the moon is 400 times smaller than the sun, but is also 400 times closer) allowing us to see total solar eclipses. Its gravity stirs our oceans. It has just the right mass to keeps Earth's axis stable. It orbits earth's ecliptic instead of the equator which is unique. It's large compared to earth 1/4 earth's size, it mirrors the Sun in the sky (summer sun rises/sets south of east/west full moon rises/sets north of east, winter they change places), It keeps the same side facing Earth as it orbits and that side looks like a face. All this from a random collision on a planet that just happened to develop life. Oh, and the Earth is spinning and tilted just right after a collision this size to give us the correct conditions for life! Coincidence? =Yeah, there are actually people who believe this!


1) The distance between the moon and the sun is 400 times greater than the distance from the earth and the moon. 2
2) The Sun happens to be 400 times the Moon’s diameter, and 400 times as far away. This means the Sun and Moon appear to be the same size when viewed from Earth. A total solar eclipse, in which the Moon is between the Earth and Sun, blocks the bright light from the Sun’s photosphere, allowing us to see the faint glow from the corona, the Sun’s outer atmosphere.

More amazing facts about the earth:

The circumference of the earth at the equator is 24,901.55 miles. The earth’s rotation speed is 1037.5646 mph. If you divide 24,901.55 by 1037.5646 you get 24. Which is the number of hours in a complete day. Just enough rotation speed compared to it’s size to equal a perfect exposure to both sun light and darkness so that life could exist here. An example of why that is important: If you take and double the hours in a day, the days would get so hot, and the nights so cold, that if life could exist here it would have a hard time doing it. In these conditions, you could have 110 plus degrees f  in the daytime, and below freezing at night in the same place, everyday So rotation speed of the earth is important to support life.

The earth orbits our sun at 66,660 mph and makes a complete orbit every 365.2425 days. This speed along with the tilt of the earth’s axis allows seasonal changes every 3 months. If the earth were going half that speed, which would double the time in each season. The extremes for each season (polar winters around zero degrees f, and above 100-degree f summers) would be so different that life could not exist here. So like the situation above, we are at the right orbital speed for life to exist.

The solar wind is particles that leave the sun’s surface. They can reach very high speeds and are made up of mainly protons and electrons. Solar wind also has the capability of striping away a planet’s atmosphere. The only defense a planet has against this is the strength of it magnetic field, which if strong enough will deflect these particles and protect the current atmosphere. Because the earth has a molten core that is comprised mainly of nickel and iron. It can produce a magnetic field strong enough to deflect the solar wind particles. And example of this not happening is the planet mars. Mar’s magnetic field is weak compared to earth. So the solar wind slowly strips it’s upper atmosphere away into space. A thin atmosphere, such as exist on mars, would make life almost impossible.

Ozone layer is also protected by the magnetic field. If the magnetic field of the earth were as weak as the planet mars, the solar wind would strip away the ozone layer which is our natural filter from the sun. Allowing the full rays of the sun in, means all life would die. The UV rays of the sun are deflected by the ozone layer. Full amount of UV rays would kill everything, basically sterilizing all life. UV rays are the most damaging to life because they alter DNA to the point life cannot exist. Example: The reason welders have to wear eye protection is because the welding light produces intense UV rays similar to the sun. Staring at a welding light for just 5 minutes can damage you eyes to the point you can become blind. Now imagine that same type of light coming at you from the sun several 1000 times more intense. And because UV light alters DNA, it’s one of the main causes of skin cancer. So having a planet filter like the ozone layer, is a must have. A must have that mars does not have.

Our Moon is like no other. The ratio of its mass compared to the mass of its host planet is about fifty times greater than the next closest known ratio of moon to host planet mass. Plus, our Moon orbits Earth more closely than any other known large moon orbits its host planet.

Thanks to these unique features, Earth, unlike the other solar system planets, possesses a stable rotation axis tilt, which protects it from rapid and extreme climatic variations that would otherwise rule out advanced life. The Moon also slowed Earth’s rotation rate down to the value at which advanced life could thrive and generated tides that recycle nutrients and waste efficiently.

Only recently have astronomers had any clue how such a special Moon could form. Over the past 15 years, astronomer Robin Canup has developed and improved models that demonstrate that the Moon resulted from a collision between a newly formed Earth (which, at the time, had a pervasive and very deep ocean) and a planet about twice the mass of Mars (Mars = 0.107 Earth masses). This collision took place at an impact angle of about 45 degrees and a very low impact velocity of less than 12 kilometers per second.1 In addition to forming the Moon, this highly fine-tuned event brought about three more changes, each significant for advanced life: (1) it blasted away most of Earth’s water and atmosphere;2 (2) it ejected light element material and delivered heavy elements; and (3) it transformed both the interior and exterior structure of the planet.

In a review article published in a December 2013 issue of Nature, Canup complains, “Current theories on the formation of the Moon owe too much to cosmic coincidences.”3 Indeed, the required “coincidences” continue to pile up. New research reveals that the Moon has a chemical composition similar to that of Earth’s outer portions, a result that Canup’s models cannot explain—unless the total mass of the collider and primordial Earth were four percent larger than the present-day Earth, the ratio of the collider’s mass to the total mass was between 0.40 and 0.45, and a fine-tuned orbital resonance with the Sun removed the just-right amount of angular momentum from the resultant Earth-Moon system.4

Astronomers Matija Ćuk and Sarah Stewart found another way to explain the similar composition. In their model, an impactor about the mass of Mars collides with a fast-spinning (rotation rate = 2.3–2.7 hours) primordial Earth.5 The planet’s fast spin generates a disk of debris made up primarily of Earth’s own mantle material from which the Moon forms, thus accounting for the similar chemical composition. As with Canup’s most recent model, a fine-tuned orbital resonance between the Moon and the Sun is needed.

In an article published in the same issue as Canup’s recent review, Stewart concludes, “In the new giant-impact models, lunar material is derived either from a range of depths in the proto-Earth’s mantle or equally from the entire mantles of two colliding half-Earths.”6 Either way, she adds, that while “each stage of lunar evolution is plausible,” she wonders “with the nested levels of dependency in a multi-stage model, is the probability of the required sequence of events vanishingly small?”7

In her review, Canup suggests that perhaps a small collider (Mars-sized) model can be retained without so much of the added fine-tuning of the Ćuk-Stewart model if the collider’s initial chemical composition were more Earth-like rather than Mars-like. However, extra fine-tuning may be needed to explain this required initial composition.

In yet another article in the same issue of Nature, earth scientist Tim Elliott observes that the complexity and fine-tuning in lunar origin models appears to be accumulating at an exponential rate. The impact on lunar origin researchers, Elliott notes, is that “the sequence of conditions that currently seems necessary in these revised versions of lunar formation have led to philosophical disquiet.”8 What is the cause of this “philosophical disquiet”? May I submit that it stems from the fact that there is now more than sufficient evidence for the supernatural, super-intelligent design of the Earth-Moon system for humanity’s specific benefit?

Posts : 6079
Join date : 2009-08-09
Age : 54
Location : Aracaju brazil
The ratio of the polar diameter of the Earth to the polar diameter of the Moon is 3.663 and vice-versa, the reciprocal ratio is 0.273 with more than 99.9% accuracy. This means the Earth and Moon system’s rotations and sizes are related in a reciprocal mathematical relationship.

Re: Earth, Moon, and Sun. Proof of creation