Defending the Christian Worldview, Creationism, and Intelligent Design » Philosophy and God » Did God use magic to create the universe ?

Did God use magic to create the universe ?

Atheists make that claim all the time: Did God use magic to create the universe? Often, they call God a "Sky-daddy". Well, first of all, magic without a magician, which would be the alternative to God creating through magic, would be far more counterintuitive. Actually, plain impossible. Something cannot come from nothing. Magic is something that violates the laws of nature. But those laws are as well the result of his creative act of creating the world we live in.  Then, the concept of "magic" has no meaning in this context of creating nature and its "laws". If HE is the creator as well of the laws of physics, why should it be impossible for HIM also to suspend them temporarily in the course of the universe's history, if it fits his plans and purposes?

This objection also implicitly expresses incredulity that an eternal mind/spirit would/could be the ultimate, necessary source of all things that depend on him, that instantiates and secures them. But there is no reason for this. Since the time of the ancient Greeks, there have been basically two worldviews. One with God, the other without. In one, the mind is the primary or ultimate reality which instantiates the material world. In the other, not.   Most of the fathers and founders of modern science also held this belief. Sir Isaac Newton said that “an intelligent and powerful Being” created it all.

And Max Planck, the father of quantum physics:
"As a man who has devoted his whole life to the most clear-headed science, to the study of matter, I can tell you as a result of my research about atoms this much: There is no matter as such. All matter originates and exists only by virtue of a force that brings the particle of an atom to vibration and holds this most minute solar system of the atom together. We must assume behind this force the existence of a conscious and intelligent mind. This mind is the matrix of all matter."

Furthermore, many atheists claim that every scientific problem mentioned so far had a natural explanation. They like to mention lightning and thunder.  They play a large role in Greek mythology, with the god of the sky, Zeus, able to harness the elements’ power to use as a weapon. But fact is, there is no Zeus that expresses his wrath. Fact is, science has discovered how lighting works.  Lightning has a vital role in replacing nitrogen in the soil, so that plants can assimilate it. 100 million tons of usable plant food per year is supplied to the soil by lightning. Nitrogen and oxygen are combined by lightning into plant food. Lightning in the nitrogen-cycle and carbon cycle, is another witness to the fact of Almighty God’s genius in designing and creating the World in awesome wisdom …past finding out. God made it self-supporting, to the finest tuned mind-boggling details, in perfect balance and harmony.  Lightning proof of God!

Truth said natural explanations have been a TOTAL FAILURE to explain basically EVERY relevant question in regards to origins. They have NO predictive power.

Science did hold the belief that the universe was eternal, until about 100 years ago, and had later to admit that it had a beginning. The Friedmann equations for the evolution of space predicted the big-bang singularity. General relativity theory predicts a boundary at the big bang, in that the laws of physics break down, and space and time shrink to nothing. That was confirmed by LeMaitre, and today, the BB model is predominant in cosmology.
But that rises a bigger philosophical question: If it had a beginning, what caused it?

L. J. Henderson, R.H. Dicke, and  Fred Hoyle were amongst the first arguing for a fine-tuned universe. It gained traction with  Brandon Carter's contribution to a 1973 Kraków symposium honouring Copernicus's 500th birthday. If naturalism were true, the universe would be typical and unexceptional. It would be lifeless. Naturalism overwhelmingly expects a dead universe. The parameters are however unexpectedly exceptional, and extremely unlikely, and life-permitting. In order to overcome the conundrum, proponents of naturalism resort to totally unscientific, made-up concepts, like a multiverse, ignoring that those also would require to have a beginning, and a finely-tuned multiverse generator.

Some of the worlds leading scientists in abiogenesis research have stated that solving the mystery of the origin of life is categorically not possible, that science has no clue how to solve the riddle, that abiogenesis research is a failure, and the most difficult problem that faces evolutionary biology and, arguably, biology in general. Jack W. Szostak: It is virtually impossible to imagine how a cell’s machines, which are mostly protein-based catalysts called enzymes, could have formed spontaneously as life first arose from nonliving matter around 3.7 billion years ago. Eugene V. Koonin: The origin of life field is a failure—we still do not have even a plausible coherent model, let alone a validated scenario, for the emergence of life on Earth. And Steve Benner in Paradoxes in the origin of life: The “origins problem” cannot be solved.

No universal scientific evolutionary prediction has met its goal.  NEVER, in over 150 years, since Darwin's book " On the origin of species " was published, has even ONE, amongst hundreds or thousands, if not millions of science papers, provided ONE DEMONSTRATION, and empirical verifiable replicable evidence, that any of the evolutionary mechanisms proposed, could produce a primary macroevolutionary transition zone of speciation and population differentiation.

W.Dembski writes: The problem is that nature has too many options and without design couldn’t sort through all those options. The problem is that natural mechanisms are too unspecific to determine any particular outcome. Natural processes could theoretically form a protein, but also compatible with the formation of a plethora of other molecular assemblages, most of which have no biological significance. Nature allows them full freedom of arrangement. Yet it’s precisely that freedom that makes nature unable to account for specified outcomes of small probability. Nature, in this case, rather than being intent on doing only one thing, is open to doing any number of things.

The origin of consciousness is a longstanding problem. René Descartes proposed that the very act of thinking about one's existence is evidence of the presence of a mind distinct from the body.  The troubling aspect of consciousness is that it is very difficult to describe scientifically. That's why it is called: "The hard problem of consciousness".  Thus, a longstanding debate on the nature of conscious experience—how does consciousness occur?—is still ongoing. Some attempt to claim that one neuron cannot, but 100 billion neurons can produce consciousness, is called: a fallacy of composition. The whole cannot have properties beyond those of its parts. That goes to the extreme of some physicalists writing that "we don't make decisions, our neurons make them for us".

When the making of the above-mentioned things becomes a highly improbable event that requires specification, design becomes the more compelling, better inference. So there is nothing irrational to hold to the theistic view, despite the frequent attempt of atheists to ridicule it. God is not a "Skydaddy" doing magic, but an eternal powerful, ultimate, necessary creator of the universe, and life. He revealed himself in scriptures, and we can know him. Anyone that ridicules the Bible, and the Christian worldview, is in my view, a self-deceptive fool. 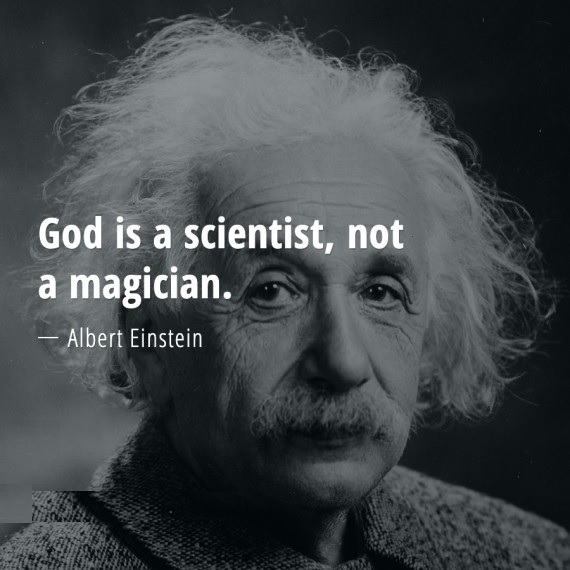 Defending the Christian Worldview, Creationism, and Intelligent Design » Philosophy and God » Did God use magic to create the universe ?