The apostles remarkably sharp observation in Romans 1.19-22, namely that God’s invisible qualities—his eternal power and divine nature—have been clearly seen, being understood from what has been made, has never been truer than in today's generation, which has access and insight of the workings of the created world, the universe, and life. And despite that, I see daily atheists professing not to know about the origin of our existence, and why there is something rather than nothing. That is in clear contradiction to what the apostle Paul said.

Psalm 8:3,4: When I look at your heavens, the work of your fingers, the moon, and the stars that you have established; what are human beings that you are mindful of them, mortals that you care for them (Psalm 8:3,4).

We know more today about the moon and the stars than ever before.

Stars, essential for advanced life to exist in the universe
https://reasonandscience.catsboard.com/t1884-stars-essential-for-advanced-life-to-exist-in-the-universe

Lee Smolin, The life of the Cosmos, page 53:
The odds to have stars in the universe comes to about one chance in 10^229. The universe contains about 10^22 stars which together contain about 10^80 protons and neutrons. These numbers are gigantic, but they are infinitesimal compared to 10^229.

The moon, essential for life on earth
https://reasonandscience.catsboard.com/t2548-the-moon-essential-for-life-on-earth

- The moon is necessary to stabilize the earth axis tilt
- The moon contributes to a stable rotation axis tilt, which protects the earth from rapid and extreme climatic variations that would otherwise rule out advanced life.
- It permits the tides which are essential for life on earth
- Without the presence of the moon and its gravitational effect, the Earth would complete a rotation every 8 hours instead of 24, making life impossible on earth

Moreover , in Psalm 19:1-6: The first six verses of Psalm 19 testify to the revelation of God through His creation:

The heavens declare the glory of God; the skies proclaim the work of his hands. Day after day they pour forth speech; night after night they display knowledge. There is no speech or language where their voice is not heard. Their voice goes out into all the earth, their words to the ends of the world. In the heavens he has pitched a tent for the sun, which is like a bridegroom coming forth from his pavilion, like a champion rejoicing to run his course. It rises at one end of the heavens and makes its circuit to the other; nothing is hidden from its heat.

The following truths are found in these verses.

1. God's Glory Is Being Proclaimed: The heavens are a declaration to the fact of God's glory. It is a sign to the entire human race that God does exist.
2. The Testimony Is Constant: This revelation about God's power and majesty is constant, occurring "day after day" and "night after night." Humans are constantly reminded of God's existence.
3. This Revelation Is Nonverbal: This revelation about God does not consist of words-it is nonverbal revelation. The heavens, therefore, offer a silent continual testimony to God.
4. It Is Worldwide In Scope: The scope of this testimony is worldwide. All people, everywhere, have access to this form of God's revelation. There are no geographic barriers.
5. There Is No Language Barrier: Since this is a non-verbal form of communication there is no language barrier. All people, in every language, are able to comprehend this form of God revealing Himself.
6. The Sun Gives Constant Testimony: The shining of the sun in the sky gives testimony to the existence and care of God. Like the sun, the existence of God is obvious to all. Nothing can hide from the sun; no one can hide from God. 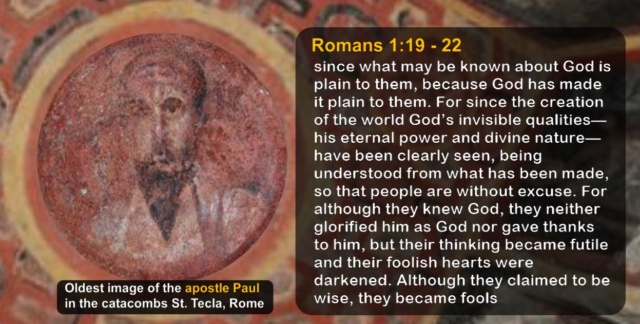