Intelligent Design, the best explanation of Origins » Christian and secular science writers » Was Hitler a Christian ?

Was Hitler a Christian ?

Richard Weikart: Hitlers religion:
Why do some people, even today, insist that Hitler was a Christian? Primarily because he said so himself. Hitler publicly professed Christianity on numerous occasions during his political career. In public speeches, he claimed to be upholding a “positive Christianity.” He once called Jesus his Lord and Savior and often praised Jesus as a great Aryan. Far more frequently, he invoked God, Providence, and the Lord. Since he had already identified himself as an adherent to “positive Christianity,” many assumed —and some still assume—that whenever he mentioned God, he must have had the Christian one in mind.

One of his earliest public statements about Christianity came in the Twenty-Five Point Program of the fledgling National Socialist German Workers’ Party. Hitler had only been a member of the party for five months when he unveiled the program to a Munich audience in February 1920

We insist upon freedom for all religious confessions in the state, providing they do not endanger its existence or offend the German race’s sense of decency and morality. The Party as such stands for a positive Christianity, without binding itself denominationally to a particular confession. It fights against the Jewish-materialistic spirit at home and abroad and believes that any lasting recovery of our people must be based on the spiritual principle: the welfare of the community comes before that of the individual.

Most historians today agree that Hitler was not a Christian in any meaningful sense. Neil Gregor, for instance, warns that Hitler’s “superficial deployment of elements of Christian discourse” should not mislead people to think that Hitler shared the views of “established religion.”4 Michael Burleigh argues that Nazism was anticlerical and despised Christianity. He recognizes that Hitler was not an atheist, but “Hitler’s God was not the Christian God, as conventionally understood.”5 In his withering but sober analysis of the complicity of the Christian churches in Nazi Germany, Robert Ericksen depicts Hitler as duplicitous when he presented himself publicly as a Christian.

After warning his followers in the first volume of Mein Kampf against offending people’s religious tastes, he threw caution to the wind in the second volume by sharply criticizing Christianity. After calling Christianity fanatically intolerant for destroying other religions, Hitler explained that Nazism would have to be just as intolerant to supplant Christianity:

A philosophy filled with infernal intolerance will only be broken by a new idea, driven forward by the same spirit, championed by the same mighty will, and at the same time pure and absolutely genuine in itself. The individual may establish with pain today that with the appearance of Christianity the first spiritual terror entered in to the far freer ancient world, but he will not be able to contest the fact that since then the world has been afflicted and dominated by this coercion, and that coercion is broken only by coercion, and terror only by terror. Only then can a new state of affairs be constructively created

Hitler’s anti-Christian sentiment shines through clearly here, as he called Christianity a “spiritual terror” that has “afflicted” the world. Earlier in the passage, he also argued Christian intolerance was a manifestation of a Jewish mentality, once again connecting Christianity with the people he most hated. Even more ominously, he called his fellow Nazis to embrace an intolerant worldview so they could throw off the shackles of Christianity. He literally promised to visit terror on Christianity. Even though several times later in life, especially before 1934, Hitler would try to portray himself as a pious Christian, he had already blown his cover. 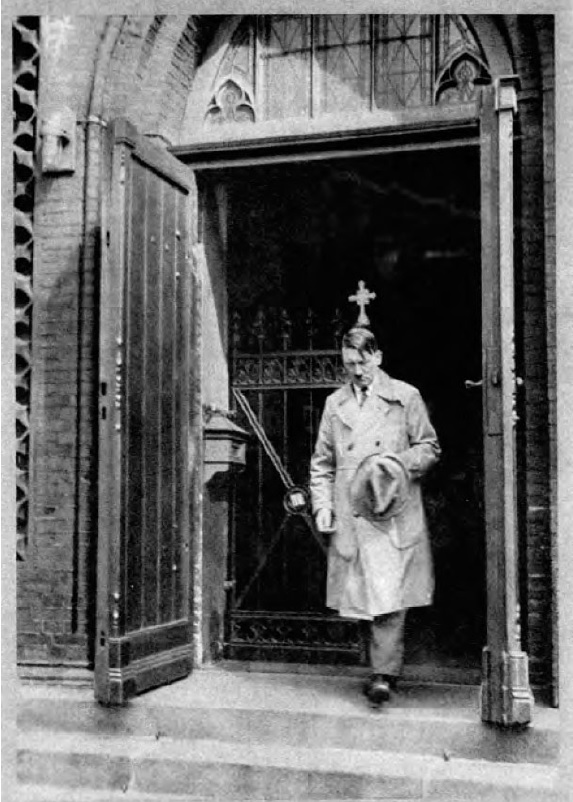 Intelligent Design, the best explanation of Origins » Christian and secular science writers » Was Hitler a Christian ?