Defending the Christian Worldview, Creationism, and Intelligent Design » Philosophy and God » Argument from incredulity and ignorance: a valid rebuttal to intelligent design arguments ?

Argument from incredulity and ignorance: a valid rebuttal to intelligent design arguments ?

Argument from incredulity and ignorance: a valid rebuttal to intelligent design arguments ? Sun Sep 20, 2020 5:36 am

This objection would be sound, if a creationist would make a similar assertion as exemplified with Russell's teapot: There is a  a china teapot revolving in an elliptical orbit between Earth and Mars. Because nobody can prove otherwise, its true. Nobody believes that, of course.   People make wild claims, and often get away with them, simply on the fact that the converse cannot otherwise be proven. Not so with Intelligent Design, and creationism . Eliminative induction is sound when there are two competing hypotheses, and one can be shown with high certainty false.   Eliminative inductions argue for the truth of a proposition by arguing that competitors to that proposition are false. Provided the proposition, together with its competitors, form a mutually exclusive and exhaustive class, eliminating all the competitors entails that the proposition is true. Since either there is a God, or not, either one or the other is true. As Sherlock Holmes's famous dictum says: when you have eliminated the impossible, whatever remains, however not fully comprehensible, but logically possible, must be the truth. Eliminative inductions, in fact, become deductions.

Naturalism rests on blind beliefism: Not science, but random, unguided, chaotic events occurring for no reason at all, and with no cause, lucky accidents, happenstance that is not secured nor imposed, guided or directed at all, cosmic and chemical selection without a selector has to be proposed as an alternative mechanism to a creator. Multiverse, bubble universe, parallel worlds, string "theory", Virtual particles, oscillating universes, an eternal universe, a universe from nothing, the formation of stars through accretion, abiogenesis, a last universal common ancestor, a tree of life, macroevolution by unguided means, billions of years, transitional fossils, convergent evolution. How can a rational, honest person analyze these systems, and say they emerged by chance? These organic structures present us with a degree of complexity that we cannot explain stochastically by unguided means. Consciousness, intelligence, language and logic as an emergent product and property of the brain, of randomly jiggling electrons, and morality that cannot be authoritative and binding, because there is no one above us.  Ought to be's are supposedly sufficiently reinforced by man to become binding. But these are all unwarranted claims, and hold on blind faith. And some are demonstrably false. Abiogenesis for example has been acknowledged by even well-known scientists as a failed hypothesis ( E.Koonin, S.Benner, Cairns-Smith etc.)

Opponents of Intelligent design commonly claim that it cannot be tested. But that is not necessary. We, humans can instantiate specified complex information, used to build irreducible machines and factories for specific purposes. Cells have a codified description of themselves in digital form stored in genes and have the machinery to transform that blueprint through information transfer into an identical representation in analog 3D form, the physical 'reality' of that description. Only intelligence can instantiate this. Using arguments from analogy, and applying abductive reasoning, we can infer that a designer best explains what we see in the natural world. We have extensive experience-based knowledge of the kinds of strategies that designing minds devise to solve various kinds of functional problems. A physical system is composed of a specific distribution of matter: a machine, a car, a clock. When we describe it, and quantify its size, structure, motions, annotate the materials used, that description contains information. When we arrange and distribute materials in a certain way for intended means, we can produce things for specific purposes and call it design. Thus, when we see a physical system and discern the arrangement of its parts having intentional functions, we call it designed.  The question thus is, when we see things in nature with purpose and appear designed, ARE they indeed the product of intentional design ?

Systems, given energy and left to themselves, DEVOLVE to give uselessly complex mixtures, “asphalts”.  The literature reports  exactly  ZERO CONFIRMED OBSERVATIONS where evolution emerged spontaneously from a devolving chemical system. it is IMPOSSIBLE for any non-living chemical system to escape devolution to enter into the Darwinian world of the “living”.  Biologically relevant molecules, monomers and polymers, in the prebiotic environment, would undergo a variety of decomposition reactions that would never lead to the complexity required for life.

Life in any form is a very serious enigma and conundrum. It does something, whatever the biochemical pathway, machinery, enzymes etc. are involved, that should not and honestly could not ever "get off the ground" by natural means. It SPONTANEOUSLY recruits Gibbs free energy from its environment so as to reduce its own entropy. That is tantamount to a rock continuously recruiting the wand to roll it up the hill, or a rusty nail "figuring out" how to spontaneously rust and add layers of galvanizing zinc on itself to fight corrosion. Unintelligent simple chemicals can't self-organize into instructions for building solar farms (photosystems 1 and 2), hydroelectric dams (ATP synthase), propulsion (motor proteins), in the event that these instructions become too damaged by the way the universe USUALLY operates. Abiogenesis is not an issue that scientists simply need more time to figure out but a fundamental problem with materialism

Advance in biochemical investigations in the last century has unravelled, that life is composed of  structures of mind-boggling organizational intricacies at the molecular level that leave us in awe,  so sophisticated that our most advanced technology seems pale by comparison. The ribosome, for example, maybe the most complex and sophisticated molercular machine, depends in its assembly on machines, that build machines, each in a different compartment, that build subunits of the ribosome, which are error checked and either repaired or discarded if miscontrued. Everything we know tells us that machines, production lines, computers, energy generating turbines, are structures of intelligent design. The cooperation and interdependent action of proteins and co-factors in cells is stupendous and depends on very specific controlled and arranged mechanisms, precise allosteric binding sites, and finely-tuned forces. Accidents do not design machines. Intellect does.

Basically all-natural phenomena demonstrate the imprints and signature of intelligent input and setup. We see an unfolding plan, a universe governed by laws, that follows mathematical principles, finely adjusted on all levels, from the Big Bang, to the earth, to permit life, which is governed by instructional complex information stored in genes and epigenetically, encoding, transmitting and decoding information, used to build, control and maintain molecular machines ( proteins ) that are build based on integrated functional complex parts ( primary to quaternary polypeptide strands and active centers ), which are literally nanorobots with internal communication systems, fully automated manufacturing production lines, transport carriers, turbines, transistors, computers, and factory parks, employed to give rise to a wide range, millions of species, of unimaginably complex multicellular organisms.

Claim: This represents a type of false dichotomy in that it excludes the possibility that there may have been an insufficient investigation to prove that the proposition is either true or false.
Reply: Proofs exist only in mathematics and logic, not in science. Atheists repeatedly claim that a solid view or position, in order to be acceptable and valid, must be capable in principle of being empirically verified. The inadequacy of this epistemological approach led to the complete collapse amongst philosophers of science during the second half of the twentieth century, helping to spark a revival of interest in Metaphysics. Today’s Flew’s sort of challenge, which loomed so large in mid-century discussions, is scarcely a blip on the philosophical radar screen. Asking for 100 percent, to truly know what occurred in the past is unrealistic. We believe lots of things with confidence even though we do not have absolute certainty. It is up to logic and the factors of different lines of evidence to determine what causes best to explain our origins. Every worldview, without exception, is a faith-based belief system, consisting of a set of statements the holder adopts as being true. Starting from this view, we can dispense with the foolish notion of "proof," as some are so quick to require. Instead of "proof" in the absolute sense, we proceed with examining the available evidence, which should point with confidence to the worldview that best accounts for that evidence.

Claim: It also does not allow for the possibility that the answer is unknowable, only knowable in the future, or neither completely true nor completely false
Reply: Either there is a(are) God(s), conscious intelligent mind(s) at the bottom of all reality, or not. The dichotomy is jointly exhaustive: everything must belong to one party or the other, and mutually exclusive: nothing can belong simultaneously to both parts.

Only one worldview can be true. If the various worldviews have mutually exclusive truth claims, only one can be true. A true system of thought must be comprehensive of thought and life. It must possess consistency and coherence in its overall claims. But most importantly, the system must correspond to reality, past, present, and future, natural and supernatural. And all major systems of thought contain key truth claims which are contrary to those of all other systems. A worldview must be consistent and explain the evidence, phenomena, and observations in the natural world adequately.

Claim: Matter and energy are all that is
Question: How do you know this?
Claimant: I don't see why something else would be necessary
Reply: That's an argument from ignorance. 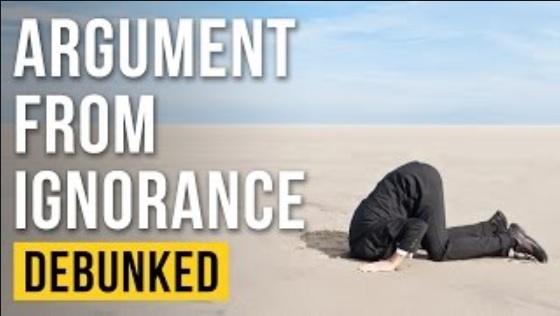 Defending the Christian Worldview, Creationism, and Intelligent Design » Philosophy and God » Argument from incredulity and ignorance: a valid rebuttal to intelligent design arguments ?