Fatty Acid and Phospholipid Biosynthesis in Prokaryotes Fri Jul 03, 2020 9:09 am

In 1956 Kennedy and Weiss published the seminal paper in the phospholipid field that formed the biological foundation for future studies in all organisms thereby establishing the “Kennedy Pathways” for phospholipid synthesis.

There is a large diversity in the structures and metabolism of membrane lipids, and not a single paradigm can be considered typical.

As we now know, phosphatidic acid (PA1, 1,2 diacyl-sn-glycerol-3-phosphate (G3P) ) is the precursor leading to the biosynthesis of the remaining phospholipids in Bacteria and Eukarya. 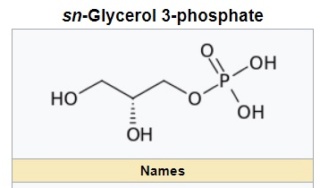 sn-Glycerol 3-phosphate is a phosphoric ester of glycerol, which is a component of glycerophospholipids. 3

Although the spectrum of phospholipid headgroup structures produced by bacteria is large, the key precursor to all of these molecules is phosphatidic acid (PtdOH). 2 Glycerol-3-phosphate derived from the glycolysis via glycerol-phosphate synthase is the universal source for the glycerol backbone of PtdOH.

My comment: This is another catch22 conundrum. Glycolysis requires a functional membrane to function. But modern membranes depend on membrane precursor phosphatidic acid to be synthesized. Another example of why cells are irreducibly complex and interdependent. 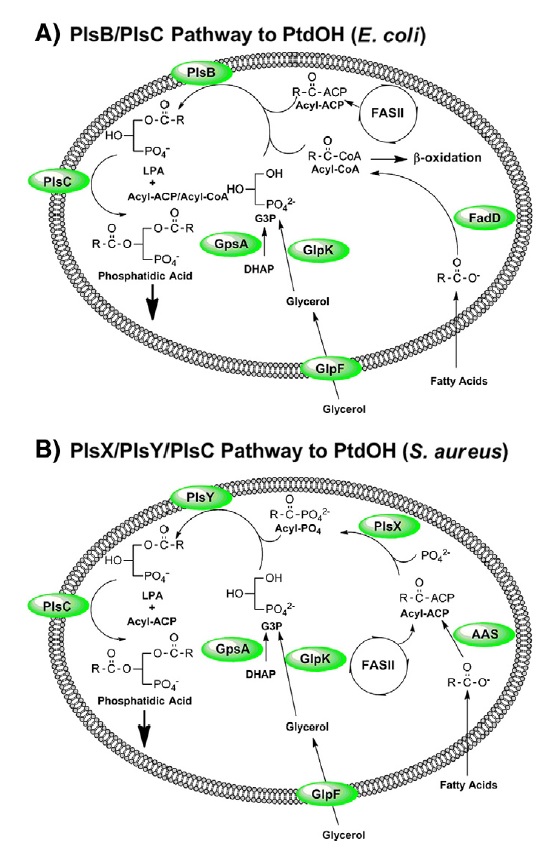 Pathways for the biosynthesis of PtdOH in bacteria.
(A) PtdOH metabolism in E. coli is representative of the bacteria that utilize the PlsB/PlsC acyltransferase pathway to PtdOH. These acyltransferases use either acyl-ACP substrates produced by type II fatty acid synthesis (FASII) or acyl-CoA thioesters generated by the activation of exogenous fatty acids by acyl-CoA synthetase (FadD). The PlsB pathway is largely confined to the γ-proteobacteria.
(B) PtdOH metabolism in S. aureus is representative of bacteria that utilize the PlsX/PlsY/PlsC acyltransferase pathway to PtdOH. Acyl-ACP generated by FASII is either used by PlsC to acylate the 2-position of LPA or is converted by PlsX to acyl-PO4 for incorporation into the 1-position by PlsY. This is the only pathway present in most Gram-positive pathogens. In both schemes, the G3P backbone is produced by GpsA, but may also be obtained from the environment by the GlpF/GlpK pathway. Many bacteria also have a transport system for G3P (not shown). Exogenous fatty acids are incorporated into phospholipid following their ligation to ACP by acyl-ACP synthetases (AAS). PlsB, PlsC, PlsY and GlpF are intrinsic membrane proteins. AAS, FadD and PlsX are soluble proteins that are thought to interact with the membrane interface.

There are two distinct families of enzymes responsible for the acylation of the 1-position of glycerol-3-phosphate. The PlsB acyltransferase was discovered in Escherichia coli, and homologs are present in many eukaryotes. This protein family primarily uses acyl–acyl carrier protein (ACP) endproducts of fatty acid synthesis as acyl donors, but may also use acyl-CoA derived from exogenous fatty acids. The second protein family, PlsY, is more widely distributed in bacteria and utilizes the unique acyl donor, acyl-phosphate, which is produced from acyl-ACP by the enzyme PlsX. The acylation of the 2-position is carried out by members of the PlsC protein family. All PlsCs use acyl-ACP as the acyl donor, although the PlsCs of the γ-proteobacteria also may use acyl-CoA. Phospholipid headgroups are precursors in the biosynthesis of other membrane-associated molecules and the diacylglycerol product of these reactions is converted to PtdOH by one of two distinct families of lipid kinases. The central importance of the de novo and recycling pathways to PtdOH in cell physiology suggest that these enzymes are suitable targets for the development of antibacterial therapeutics in Gram-positive pathogens. This article is part of a Special Issue entitled Phospholipids and Phospholipid Metabolism.

Archaea phospholipids differ in that they are composed of sn-glycerol-1-phosphate in ether linkage at the 2- and 3-positions to long-chain poly isoprenoids. 1 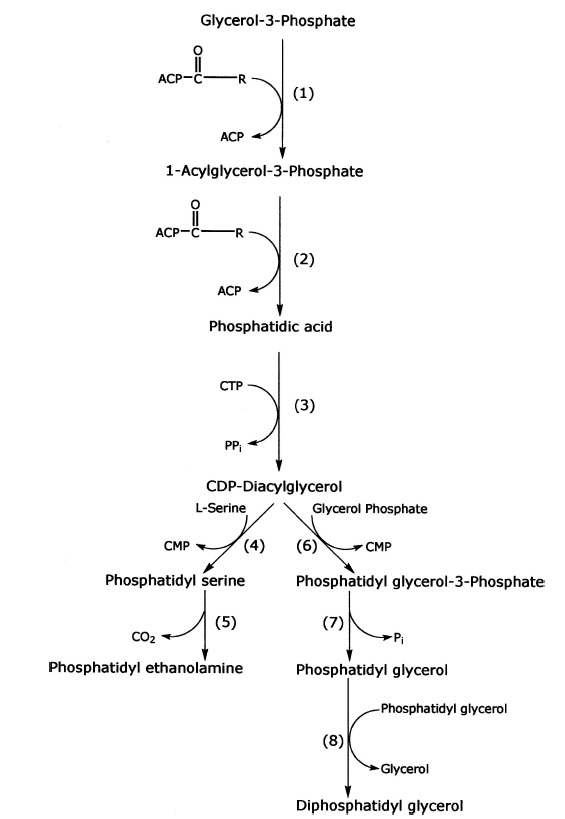 Synthesis of phospholipids in bacteria.
Enzymes for synthesis are as follows:

As in eukaryotic cells, phosphatidic acid PA is the precursor to all the glycerol-based (as distinguished from Lipid A core of lipopolysaccharide (LPS)) phospholipids of E. coli. PA is synthesized in two sequential steps employing long chain acyl-CoA or acyl-ACP (acyl carrier protein) for acylation first at the sn-1 and then the sn-2 position catalyzed by the plsB gene products, respectively.

The initiation module.
This group of enzymes is responsible for the initiation of FASII. Acetyl-CoA carboxylase is a 4-protein complex that produces malonyl-CoA by a two-step reaction. AccC carboxylates biotin attached to BCCP, and then AccAD transfers the carboxyl group to acetyl- CoA. Acyl carrier protein (ACP) is the key acyl group carrier in FASII. The primary gene product is an apoprotein that is converted to ACP by the transfer of the 4′-phosphopantetheine moiety of CoA to ACP catalysed by ACP synthase (AcpS). Malonyl-CoA:ACP transacylase (FabD) maintains an equilibrium between the malonyl-CoA and malonyl-ACP pools. FabH is the initiation-condensing enzyme (3-ketoacyl-ACP synthase III) that condenses acetyl-CoA to malonyl-ACP to form the first 3-ketoacyl-ACP intermediate in FASII. Each time FabH fires, a new acyl chain is made. Bacteria that produce branched-chain fatty acids use a branched-chain acyl-CoA primer derived from amino acid metabolism via branched-chain ketoacid dehydrogenase (BKD).

THE INITIATION MODULE
Acyl Carrier Protein
A central feature of fatty acid biosynthesis FASII is that the intermediates are carried from enzyme to enzyme by a small (8.86 kDa), acidic, and highly soluble protein, ACP, the product of the acpP gene. ACP is one of the most abundant proteins in E. coli, constituting about 0.25% of the total soluble protein (∼6 × 104 molecules/cell). The acyl intermediates of fatty acid biosynthesis are bound to the protein through a thioester linkage to the terminal sulphhydryl of the 4′-phosphopantetheine prosthetic group. The prosthetic group contains the only thiol group of ACP and is attached to the protein via a phosphodiester linkage to Ser-36. ACP must interact specifically and transiently with all of the enzymes of FASII and does so through interactions with exposed negatively charged residues on ACP with a patch of positive residues on the surfaces of the fab enzymes. The ACP pool in normally growing cells is approximately one eighth of the coenzyme A (CoA) pool, the other acyl group carrier in cells. The prosthetic group of ACP is derived from CoA, and the common feature of both is the pantetheine arm for thioester formation. ACP is maintained in the active, holoform in vivo, indicating that the supply of prosthetic group does not limit fatty acid biosynthesis. The 4′-phosphopantetheine prosthetic group is transferred from CoA to apo-ACP by the 14 kDa trimeric [ACP]synthase (Figure above). The [ACP]synthase from Bacillus subtilis was crystallized in complex with ACP to give the first detailed look at ACP-protein interactions. ACP is one of the most interactive proteins in bacterial physiology, and the physiological significance of its recognition by all its binding partners continues to be the subject of research. The ACPs from one bacterial species readily substitutes for other ACPs in FASII due to the conservation of residues along helix-2, termed the recognition helix. The conserved negatively charged and hydrophobic residues of ACP interact with a complementary constellation of basic and hydrophobic residues on the target protein that are adjacent to the active site tunnel. Whereas the fab enzymes do not have a conserved primary sequence that can be recognized as an ACP recognition motif, their 3-dimensional structures illustrate that the basic hydrophobic recognition region at the active site entrance is a common structural feature critically important for ACP binding.