Defending the Christian Worldview, Creationism, and Intelligent Design » Molecular biology of the cell » Just a warm little pond, or...... ??!!

in a now-famous paragraph in the letter sent to the same addressee on February 1st, 1871, Charles Darwin stated that «it is often said that all the conditions for the first production of a living being are now present, which could ever have been present. But if (and oh what a big if) we could conceive in some warm little pond with all sort of ammonia and phosphoric salts,—light, heat, electricity present, that a protein compound was chemically formed, ready to undergo still more complex changes, at the present such matter would be instantly devoured, or absorbed, which would not have been the case before living creatures were formed [...]».
~Charles Darwin, in a letter to Joseph Hooker (1871)

Today, we knot better.  As one peers inside the cell, one immediately sees that the cell is chock full of ultrasophisticated high-tech, and unimaginably complex internal components, organelles and other structures. These complex structures are not just floating around at random; instead, they have very specific and defined positions within the cell.

This is perhaps most dramatically illustrated in the ciliates. A good example is the giant single-celled ciliate Stentor coeruleus. This millimeter-long cell is covered with parallel rows of cilia and microtubules, with a giant array of cilia known as a membranellar band at one end, and a sticky holdfast at the other.

These two structures define an anterior–posterior axis. Every structure within the cell, including the macronucleus, the contractile vacuole pore, and the oral pouch, have defined positions along this axis as well as relative to a dorsal-ventral axis defined by the pattern of cortical stripes.

The complexity extends down in scale to the organization of the cortical rows of cilia. Each row contains hundreds of basal bodies flanked by an orderly stack of microtubules. Below the microtubule stack is a bundle of contractile fibers that the cell uses to bend and escape predators. Going further down in scale, each of the cilia is nucleated by a basal body, also known as a centriole, which is itself a complex structure consisting of nine microtubule triplets organized around a central cartwheel. The immense complexity of just this one cell looks nothing like a watery bag of enzymes, and while Stentor may be an extreme example, it turns out that all cells have complex subcellular structure when looked at carefully.

The big question is where does this structure come from?

In animal or plant development, we can explain away complexity by claiming that it results from a huge number of cells each of which is capable of switching into different states based on gene expression programs. This is comforting because it lets us feel like we understand what is going on, since we know a lot about transcriptional control. At the subcellular level, we are forced to deal with the question of morphogenesis much more directly.

We can break the question down into two levels.

First, we ask how the individual structures of the cell are themselves assembled. Then, we can ask how the relative positions of these structures are determined. By violating detailed balance, non-equilibrium processes permit assembly to take place in a series of defined steps, one after another, whereas in an equilibrium system everything tries to stick together at once.  Such a sequential assembly thus allows for the assembly of much more complicated structures. The ability of non-equilibrium systems to spontaneously break symmetry is a central theme in the complex anatomy of cells. Microtubules combined with motor proteins can spontaneously organize bipolar structures that resemble the arrangement of microtubules seen in mitotic spindles. Complex examples include larger protein machines of the Central Dogma, such as the ribosome, the spliceosome, and the DNA replication machine.  We consider such protein machines to be self-assembling in the sense that the information required to build them comes purely from intermolecular interactions, including protein-protein interactions, protein–RNA interactions, and RNA folding interactions.

The size, number, and even form of self-assembling structures can be regulated by inputs from regulatory pathways that determine the rate and position of nucleation, the rate of growth, subunit availability, and eventual disassembly.

The shape of biological structures ultimately arises from physical forces. Active forces applied by the cytoskeleton can sculpt the shape of membrane-bound organelles by pulling out tethers or branches, turning a blob into a network
One self-assembling complex that plays a particular role in establishing complex cellular patterning is the centriole.

Most of the time, new centrioles only assemble adjacent to pre-existing centrioles, suggesting a level of spatial control. Moreover, when a cell contains too many centrioles, the synthesis of new centrioles is inhibited. The importance of these fiber systems is that they allow the centriole to act as a structural organizing center.

Positional Information and Morphogen Gradients
Symmetry-breaking events can mark one region of the cell as being different from other regions, but if this is to lead to a globally defined arrangement of components, this information needs to be propagated to the rest of the cell, such that each region of the cell is ‘marked’ with positional information telling which components belong in that region. A simple-sounding way to do this is via gradients of chemical signals, which could be small molecules such as lipids, macromolecules such as proteins or mRNA molecules, or else modified states such as phosphorylated proteins.

Question: What is the origin of this information? Consider, that the first living cells required centrioles, and this kind of information, in order to self-replicate.

In abnormal situations, a single cell can contain conflicting intracellular patterning signals. By studying how the cell responds to these conflicting signals, we can gain clues regarding how those signals are interpreted and generated.

Question: Had the generation of the signals, and the ability of the cell to interpret these signals, not have to be generated simultaneously, and therefore, by intelligence?

The giant ciliate Stentor has a clear anterior-posterior body axis with a feeding structure at one end and a holdfast at the other. The feeding end is considered anterior and the holdfast posterior. Stentor excels at wound healing and regeneration which allows cutting and pasting experiments to be done. Such experiments have found that, if a second posterior region is grafted onto a cell, such that it has two holdfasts, these ends will gradually coalesce such that the cell can restore a single anterior-posterior body axis. This experiment suggests that a cell is able to recognize the fact that it contains two conflicting sets of anterior-posterior signals, and then adjusts its morphology so as to bring the two gradients into alignment.

Question: In order to be able to recognize and adjust itself to the right anterior-posterior body axis, had this information of the right positional cue not have to be pre-programmed?

Another source of positional information is the cytoskeleton itself. Because microtubules are polarized structures, they confer information about direction and distance relative to the microtubule-organizing center. Moreover, it is possible for different microtubules within one cell to be marked with post-translation modifications that allow them to serve as tracks for different cargo.

The astonishing  language is written on microtubules, amazing evidence of  design
https://reasonandscience.catsboard.com/t2096-the-astonishing-language-written-on-microtubules-amazing-evidence-of-design

Furthermore, the cell might be using a combination of cytoskeleton-mediated and gradient-mediated positional information. So there are whole-cell patterning signals that extend over long ranges, and short-range local order provided by cytoskeletal structures.

We are thus left with the picture of cellular anatomy arising from the interplay of multiple systems. Each structure has its own assembly pathway that can involve equilibrium processes of energy minimization or non-equilibrium processes of self-organization and symmetry breaking. The position of these structures responds to cell polarity and patterning processes which communicate positional information over long ranges.

That raises the question of how could such complex systems for generating cellular anatomy have emerged?

While the paper presumes evolution, it goes to ask:

The evolution of complexity is always a challenging issue because it seems that multiple innovations must have all taken place before a complex shape is fully made, and anything short of that final structure would not be functional.

My remark: Is that not an admission of irreducible complexity? Yes, exactly !! The paper continues: "This creates a sense of ‘irreducible complexity’ ". Weldone. They continue and do not demonstrate in a convincing manner, how these structures could have evolved, besides musing about convergent evolution. I see however once again clear evidence of intelligent design.

Based on evidence seen in biochemistry on a molecular level, we can now say affirmatively and conclusively, that Darwin's theory of evolution by natural selection in regards to primary speciation & macroevolutionary level has been falsified.

That brings us to the origin by an intelligent designer. 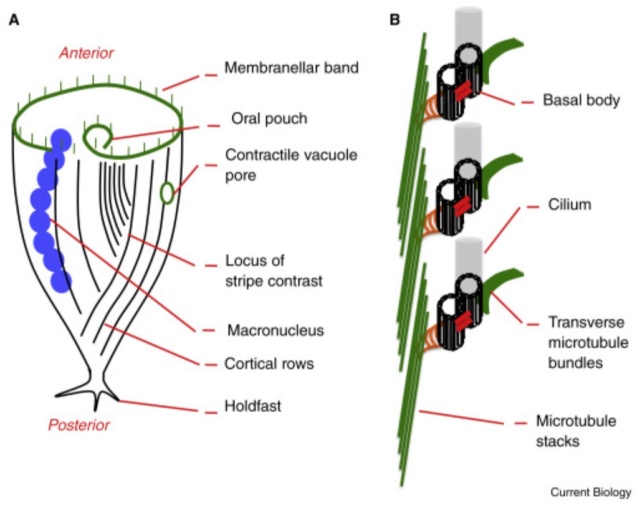 Cells have complex anatomy at multiple scales.
(A) The anatomy of Stentor. The anterior-posterior axis is indicated by the membranellar band at the anterior end and a holdfast at the posterior end. Longitudinal stripes of cilia run the length of the body, with variable spacing between them such that a region exists where closely spaced stripes meet widely spaced stripes. This locus of stripe contrast defines a ventral surface. Together the anterior–posterior and dorsal–ventral axes define a midline, relative to which all other cellular structures have defined locations. For example, the macronucleus is always to the right (from the cell’s perspective) of the midline, while the contractile vacuole pore is always to the left.
(B) Detailed view of a cortical row showing pairs of basal bodies (centrioles), which link up to both longitudinal and transverse microtubule bundles (green).

Defending the Christian Worldview, Creationism, and Intelligent Design » Molecular biology of the cell » Just a warm little pond, or...... ??!!