Microsoft advertises with and for a satanist

The devil is the father of lies. He disguises himself as an "angel" and therefore his servants present themselves as promoting human wellbeing and apparently care for charitable causes.


Central to advertising is Abramović's "art", which mainly consists of blood, intestines and cannibalism. In fact, she uses art as a cover for her occult and satanic rituals, which also involve human sacrifice and abnormal sexual practices.

The Microsoft advertisement entitled "Marina Abramovic Presents 'Life' in Mixed Reality" showed an "art" exhibition with "mixed" reality, in which Abramović's image is viewed by viewers through a mixed reality headset that Images projected onto glasses.

Microsoft probably thought that the American audience had already forgotten what was known in 2016 in connection with the "Pizzagate affair" and "Spirit Cooking". Not so, because negative "thumbs down" hailed reviews of the advertising and Microsoft deleted the advertising video from Youtube very quickly.

The video got 624 positive versus 24,000 negative ratings. What a PR disaster for Microsoft !!!

Reposted after Micro$oft removed the video do to massive dislikes. Its seems that Micro$oft does not want you to see this video anymore.

Abramović was put in the spotlight in 2016 after emails from Hillary Clinton's campaign manager John Podesta leaked, in which Abramović emailed John Brother Tony asking if John would come to them for a "spirit cooking dinner". FEC (Federal Election Commission) records later revealed that Abramović had made the maximum donation to Hillary Clinton's 2016 campaign.

"Marina Abramović is probably the most celebrated performance artist alive today. Known for risky performances that push the limits of human endurance, it's difficult to overstate their importance within the art world and pop culture in general."

Then the mixed reality system they wanted to sell with advertising was explained:

"For the first time, viewers can experience performance art without limits - and without the artist being technically 'present'. As soon as they put on the HoloLens 2 headset, the perfect shape of Abramović takes shape before their eyes."

To prove all the connections between the super rich Satanists (billionaires) and their sponsored "Muses", here is a recent picture with Marina Abramović and Jacob Rothschild in front of the painting by Sir Thomas Lawrence from 1797 that bears the title: "Satan summoning his Legions - Satan calls his legions together ". The painting hangs in the Royal Academy in London

The Rotschilds are avowed Satanists and everything they have been doing for hundreds of years is used to implement the diabolical plan. If you walk into the old building of the Rotschild Bank in Zurich, you are frightened by the grimaces and occult symbols that can be seen there.

And Bill Gates belongs to this legion of Satan and wants to vaccinate all of humanity with the inflated corona crisis and to provide a "meal". That is his mission !!!

It should not be mentioned that many of the servants of Satan, the pedophiles, rapists and child molesters, the global elite, the multi-billionaires, the banksters and warmongers coincidentally belong to a "clan".

You can call my a conspiracy fantasist, but the evidence speaks for itself. 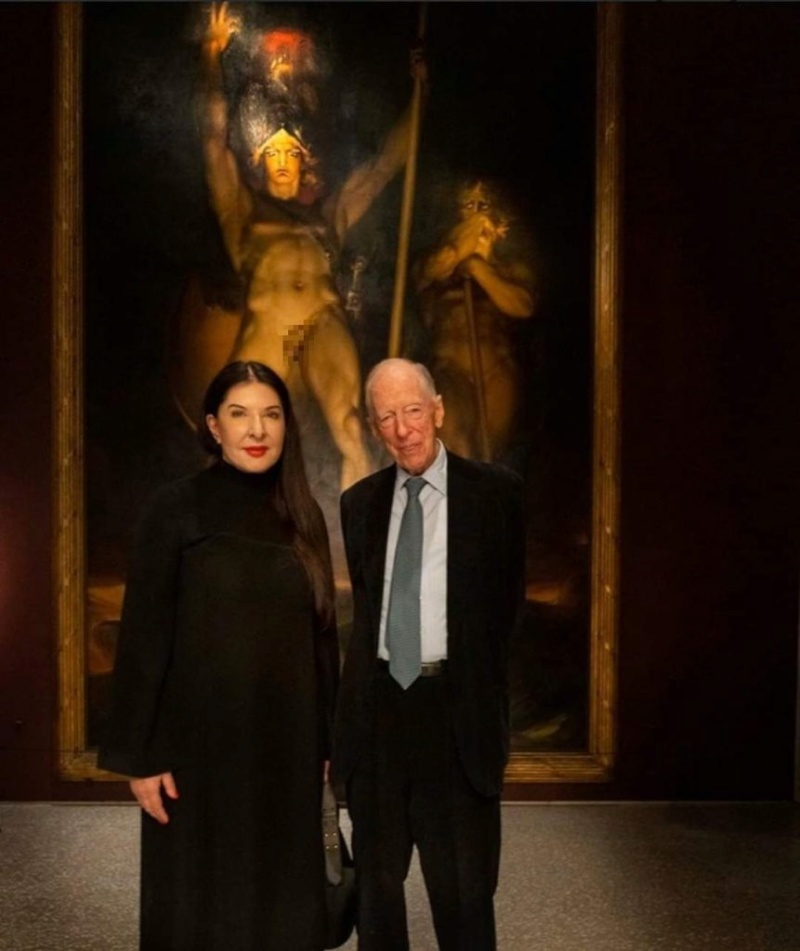