Defending the Christian Worlview, Creationism, and Intelligent Design » Philosophy and God » Something creating itself is nonsense

Something creating itself is nonsense

Claim: Stephen Hawking said:
Bodies such as stars or black holes cannot just appear out of nothing. But a whole universe can… Because there is a law like gravity, the universe can and will create itself from nothing… Spontaneous creation is the reason there is something rather than nothing, why the universe exists, why we exist. It is not necessary to invoke God to light the blue touch paper and set the universe going.
Response: The Universe did not create itself. Such an idea is absurd, both philosophically and scientifically. 2   Would something not have to exist before it existed to create itself? That's nonsense. For the same reasons a person cannot be his own father, a universe cannot create itself.  That is indeed true (and there is indeed indications that it may not be). Absolutely no data is necessary to base that presupposition on. It is logical and self-evident.  Saying that the question is enigmatic, unproven and answer unknown, is not justified either.

W.L.Craig:
I have heard scientists say that if the net energy of the universe is zero, then the universe need not have a cause of its beginning to exist because nothing really exists so that we do not have the absurdity of something’s coming from nothing.

This attempt to draw metaphysical implications from the zero net energy hypothesis is a bad joke. It’s like saying that if your debts and your assets exactly cancel each other out, so that your net worth is zero, then there is no cause of your current financial condition. The suggestion that nothing exists is absurd. Not only do I undeniably exist, but according to the hypothesis, the positive and negative energy exists. So as Christopher Isham, Britain’s premier quantum cosmologist, points out, there still needs to be “ontic seeding” to create the positive and negative energy in the first place.

"Net energy is zero" is what is called a construct. It's like "the average family with 2.4 children". It's not an actual object you can point to, but something you get when you run the calculations for positive and negative elements. Do you know what you have when you have positive and negative elements? Elements. That's not nothing, that's something. Something that 1) doesn't have to exist and 2) logically cannot exist eternally. So we're back to the same question. If non-physical causation is a non-starter for you, either offer an explanation that's physical that doesn't suffer from those problems of offer an explanation as to why non-physical explanations are so repulsive.

for someone who does not have an a priori commitment to the Big Bang (and inflation theory), it is not at all clear that the universe’s total energy would be exactly zero. In fact, it seems extremely unlikely. 1 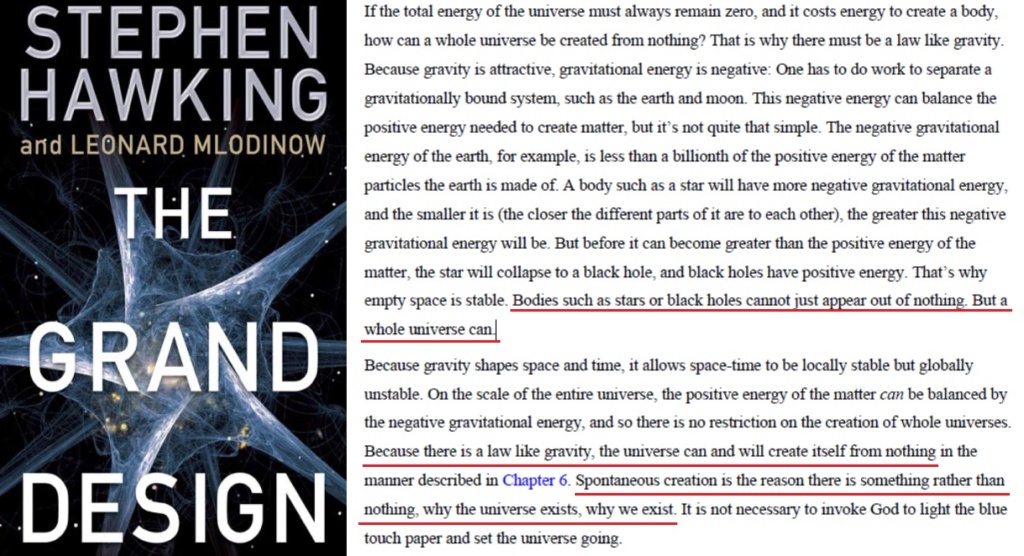 Defending the Christian Worlview, Creationism, and Intelligent Design » Philosophy and God » Something creating itself is nonsense