Complex life forms need to have the ability to perceive and correctly respond to the environment, cell differentiation, tissue development and tissue repair during development, immunity response, as well as maintain normal tissue homeostasis. Nothing of this can happen without the precise orchestration of the gene regulatory network ( dGRN) 2

1. Complex multicellular lifeforms depend on gene regulatory networks (dGRN's) which are a collection of molecular regulators that interact with each other and with other substances in the cell to orchestrate the expression of DNA.
2. dGRN's operate based on logic gates and their networks process chemical input signals similar to computers. These encoded instructions are based on boolean logic.
3. Logic depends on reason. Reason depends on intelligence. Only an intelligent mind can think rationally, and implement a system based on conceptual laws of logic. Therefore, the best and most reasonable explanation for the existence of complex gene regulatory networks based on boolean logic, essential for the make of complex multicellular organisms, is the creative action of a powerful, transcendent, intelligent Creator.

Molecular and biomolecular logic gates and their networks process chemical input signals similarly to computers. The similarities in the processing of information by biological systems and human-designed devices are broadly recognized by many researchers.

The task of information processing, or computation, is performed by man-made ‘, and interestingly, natural devices’. Man-made computers are made from silicon chips, whereas natural ‘computers’, such as the brain, use cells and molecules. Computation also occurs on a much smaller scale in regulatory and signalling pathways in individual cells and even within single biomolecules. Indeed, much of what we recognize as life results from the remarkable capacity of biological building blocks to compute in highly sophisticated ways. Rational design and engineering of biological computing systems can greatly enhance our ability to study and to control biological systems.

DNA can be compared to a huge orchestra composed of a myriad of players, each of them with a book of notes, which they are instructed to play, and the director can be compared to the Gene regulatory network, which directs each player when to play, and others when to keep quiet. These instructions follow a specific logic. In the same sense, as the correct directing of the Orchestra provides a harmonious whole of the partiture, the correct directing of genes,  turning them on an off at the right time, produces the precise specification how to build a complex multicellular organism.

The gene is the fundamental unit of biological information.  The DNA double helix is beautiful not only because it is an elegant structure but because that structure reveals that DNA can act as a digital information storage device that can be precisely copied. At the structural level of the cell, we observe phenomena such as general cellular homeostasis and the maintenance of cell integrity, the generation of spatial and temporal order, inter- and intracellular signalling, cell ‘memory’ and reproduction. Information is managed in living systems which is evidence of a higher level biological phenomena.

The gene regulatory network dGRNs is based on logic. the architecture of dGRNs is based on developmental logic which is generated at the system level.  dGRNs can be represented as complex logic maps that state in detail the interactions between developmental control genes (transcription factors and components of cell signaling pathways) and cis-regulatory modules (promoter, enhancers, and insulators) which visualize how differentiation and structural genes (target genes) are turned off or on at a given time and location during development.

Transcriptional regulatory circuits are engineered to perform a wide range of logic functions. dGRNs have a modular architecture, consisting of multiple sub-circuits—each in charge of individual regulatory tasks defined by a set of specific developmental control genes. For example, the components controlling the initial stages of development are at the top of the hierarchy, while the portions governing intermediate processes, such as spatial subdivision and morphological patterns are in the middle, and the components controlling more specific functions, including cell differentiation and organogenesis/morphogenesis, are at the periphery.

The subcircuits perform biologically meaningful jobs, for example, acting as logic gates, interpreting signals, stabilizing given regulatory states, or establishing specific regulatory states in given cell lineages. The logic circuits that operate within cells can be broken down into the individual segments that carry out specific computational functions. These segments are ‘logic modules’.

Genes encode transcription factors which act like switches turning genes on and off for expression are included in dGRNs, components of signal transduction pathways, and often effector genes as markers of differentiated cell states. dGRNs have the potential of providing a causal understanding of how upstream specification controls downstream events (i.e. differentiation or cell biological functions).

The control regions associated with transcription units may be considered the logic unit where input signals from various regulators are integrated to govern the rate of transcription. Some things never change, and a principle is that developmental jobs are controlled through the logic outputs of genetic subcircuits. Subcircuit function depends exclusively on topological design.

Logic gates evoke images of circuit boards, but cells are arguably equally good in relying on logic computations.  A classic example is the Lac operon, which activates itself upon the condition “lactose AND NOT glucose”. In recent years, there have been multiple reports on rationally designed, genetically encoded logic gates and circuits in living cells.

Named after George Boole, a 19th-century mathematician, Boolean logic is the basis of digital circuit design. For example, the AND function means that both conditions must be on to trigger the circuit. In notational form, where 1 means present and 0 means absent. Digital circuits make extensive use of logic elements which are interconnected to create logic gates, capable of executing Boolean logic functions including NOT, OR, AND, and all their possible combinations

These interdependent networks of genes and gene products present a striking appearance of design. What emerges, from the analysis of dGRNs is almost astounding: a network of logic interactions programmed into the DNA sequence that amounts essentially to a hardwired biological computational device.

Biochemistry demonstrates teleology - that is -  goal orientation on every level, which is getting alive, survival, and reproduction.
Following are three of the most important Laws of Logic: Things “are” what they “are”. “A” is “A”. “A” cannot be both “A” and “Non-A” at the same time. Statements are either true or false. 3 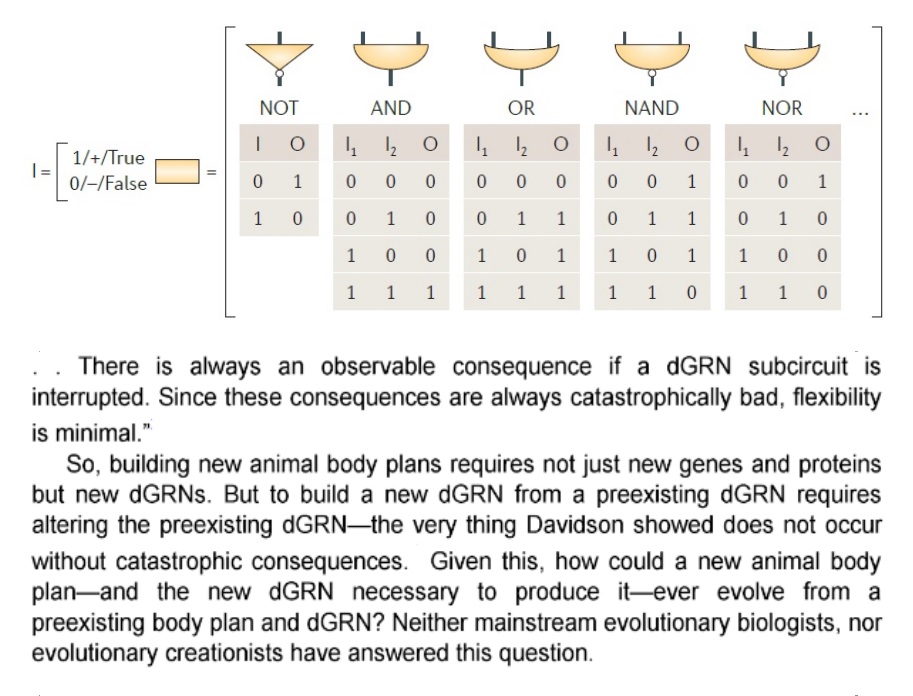