Defending the Christian Worlview, Creationism, and Intelligent Design » Theory of evolution » Is Evolution a Secular Religion?

Is Evolution a Secular Religion?

Richard Dawkins
My personal feeling is that understanding evolution led me to atheism.

Richard Dawkins in “The Blind Watchmaker”
Darwin made it possible to be an intellectually fulfilled atheist. The essential idea of The Blind Watchmaker is that we don’t need to postulate a designer in order to understand life, or anything else in the universe.

Response:
The problem with this line of reasoning is two-fold:
1. Darwins proposed evolutionary mechanism has been falsified in recent times with the progress of scientific research: The BIG ( umbrella ) contributor to explain organismal complexity is preprogrammed instructional complex INFORMATION encoded in various languages and communication through signalling by various signalling networks that act on a structural level. These instructions are pre-programmed ( or front-loaded ) to respond to environmental cues, development, and nutrition demands, and they are apt to communicate, crosstalk, signal, regulate, govern, control, recruit, interpret, recognize, orchestrate, elaborate strategies, guide and so forth. All codes, blueprints, and languages are inventions by intelligence. Therefore, the genetic and epigenetic codes and signalling networks and the instructions to build cells and complex biological organisms were most likely created by an intelligent agency.

2. Darwins Theory of evolution does only refer to the origin of species, IOW. biodiversity, but not all other relevant questions in regards to origins. Cosmological and chemical evolution are empty words that do not serve to explain anything that regards the origin and fine-tuning of the universe and the physical laws, nor the origin of chemical elements nor the origin of life. All questions, which have not been addressed adequately through " No-God hypotheses".

Science does NOT have conclusive, compelling explanations of:

- The origin and cause of the universe, nor its fine-tuning. All that proponents of naturalism can do is speculate in regard to eventual, imagined scenarios, or admit ignorance. The usual explanations are
- virtual particles
- eternal universes
- multiverses, bubble universes, M-Theory etc.
- Stars: the accretion theory proposed an impossible scenario, namely that gas exercised gravitational forces and clumped together to form stars. It has never been observed, and his highly speculative
- the separation of the land, and oceans: Science has no idea nor good explanations why and how it happened, or where the water on earth came from
- the origin of life: there are not credible naturalistic hypotheses. Rather than closing the gap, scientific advance exposes the impossibility.
- The origin of plants: explained by Darwins Theory, and the highly speculative idea that prokaryotic cells engulfed another cell, and by endosymbiosis, eukaryotic cells emerged. There are several reasons why that is not compelling. Plants use photosynthesis as energy source. Oxygenic photosynthesis has no known evolutionary precursors, and is extremely complex and requires several parts that are essential. No scientist has compelling answers how photosynthesis evolved. Only speculation
- Humans: science has no explanation for the origin of sex, nor conscience, nor language, nor morality, nor why humans have inherent dignity, value, or meaning.


Michael Ruse*
Science  07 Mar 2003
If we wish to deny that evolution is more than just a scientific theory, the Creationists do have a point. The history of the theory of evolution falls naturally into three parts

(1). The first part took place from the mid-18th century up to the publication of Charles Darwin's theory of natural selection as expounded in his Origin of Species published in 1859. Up until then, evolution was little more than a pseudo-science on a par with mesmerism (animal magnetism) or phrenology (brain bumps), used as much by its practitioners to convey moral and social messages as to describe the physical world.

Charles Darwin  wanted to give an empirically grounded basis for belief in the fact of evolution. Second, he wanted to persuade his readers of a particular mechanism of evolution, the natural selection of the successful brought on by the struggle for existence. In his first aim, Darwin was spectacularly successful. Within a decade of the publication of his Origin of Species, thinking people were convinced of the fact of evolution. However, regarding his second aim to convince folk about natural selection, Darwin had less success. Most people went for some form of evolution by jumps (saltationism), inheritance of acquired characteristics (Lamarckism), or some other mode of change. Darwin failed in another respect, too. He hoped to upgrade the study of evolution to a respectable, professional science—the kind offered in lectures at universities, with dedicated students and well-funded research. It was not to be. A kind of bastardized Germanic evolution did make it into academia—but it was concerned less with mechanisms and more with hypothesizing about histories, being more connected to Ernst Haeckel's biogenetic law (“ontogeny recapitulates phylogeny”) than anything to be found in the Origin of Species. As a mature professional research area, evolution was a flop. It simply did not materialize.

Why was this? Darwin himself was an invalid from the age of 30, and any profession building had to be done by his supporters, in particular by his “bulldog,” Thomas Henry Huxley. In many respects, Huxley played to Darwin the role that Saint Paul played to Jesus, promoting the master's ideas. But just as Saint Paul rather molded Jesus' legacy to his own ends, so also Huxley molded Darwin's legacy. At the time that the Origin of Species was published, Britain was a country desperately in need of reform, as revealed by the horrors of the Crimean War and the Indian Mutiny. Huxley and others worked hard to bring about change, trying to move public perceptions into the 20th century. They reformed education, the civil service, the military, and much else. Huxley's own work was in higher education, and he succeeded best in the areas of physiology and morphology. He realized that to improve and professionalize these fields as areas of teaching and research, he needed clients (a must in all system building). Huxley sold physiology to the medical profession, just then desperate to change from killing to curing. Huxley's offer of a supply of students, ready for specialized medical training, with a solid background in modern physiology was gratefully received. Morphology, Huxley sold to the teaching profession, on the grounds that hands-on empirical study was much better training for modern life than the outmoded classics. Huxley himself sat on the new London School Board and started teacher training courses. His most famous student was the novelist H. G. Wells.

Evolution had no immediate payoff. Learning phylogenies did not cure belly ache, and it was still all a bit too daring for regular schoolroom instruction. But Huxley could see a place for evolution. The chief ideological support of those who opposed the reformers—the landowners, the squires, the generals, and the others—came from the Anglican Church. Hence, Huxley saw the need to found his own church, and evolution was the ideal cornerstone. It offered a story of origins, one that (thanks to progress) puts humans at the center and top and that could even provide moral messages. The philosopher Herbert Spencer was a great help here. He was ever ready to urge his fellow Victorians that the way to true virtue lies through progress, which comes from promoting a struggle in society as well as in biology—a laissez-faire socioeconomic philosophy. Thus, evolution had its commandments no less than did Christianity. And so Huxley preached evolution-as-world-view at working men's clubs, from the podia during presidential addresses, and in debates with clerics—notably Samuel Wilberforce, Bishop of Oxford. He even aided the founding of new cathedrals of evolution, stuffed with displays of dinosaurs newly discovered in the American West. Except, of course, these halls of worship were better known as natural history museums .

As with Christianity, not everyone claimed exactly the same thing in the name of their Lord. Yet, moral norms were the game in town, and things continued this way until the third phase, which began around 1930. This was the era during which a number of mathematically trained thinkers—notably Ronald Fisher and J. B. S. Haldane in England, and Sewall Wright in America—fused Darwinian selection with Mendelian genetics, and thus provided the conceptual foundations of what became known as the synthetic theory of evolution or neo-Darwinism. Rapidly, the experimentalists and naturalists—notably Theodosius Dobzhansky in America and E. B. Ford in England—started to put empirical flesh on the mathematical skeleton, and finally Darwin's dream of a professional evolution with selection at its heart was realized. But there is more to the story than this. These new-style evolutionists—the mathematicians and empiricists—wanted to professionalize evolution because they wanted to study it full time in universities, with students and research grants, and so forth. However, like everyone else, they had been initially attracted to evolution precisely because of its quasi-religious aspects, regardless of whether these formed the basis of an agnostic/atheistic humanism or something to revitalize an old religion that had lost its spirit and vigor. Hence, they wanted to keep a value-impregnated evolutionism that delivered moral messages even as it strived for greater progressive triumphs.

There is professional evolutionary biology: mathematical, experimental, not laden with value statements. But, you are not going to find the answer to the world's mysteries or to societal problems if you open the pages of Evolution or Animal Behaviour. Then, sometimes from the same person, you have evolution as secular religion, generally working from an explicitly materialist background and solving all of the world's major problems, from racism to education to conservation. Consider


Edward O. Wilson, rightfully regarded as one of the most outstanding professional evolutionary biologists of our time, and the author of major works of straight science. In his On Human Nature, he calmly assures us that evolution is a myth that is now ready to take over Christianity. And, if this is so, “the final decisive edge enjoyed by scientific naturalism will come from its capacity to explain traditional religion, its chief competition, as a wholly material phenomenon.

Theology is not likely to survive as an independent intellectual discipline”. An ardent progressionist, Wilson sees moral norms emerging from our need to keep the evolutionary process moving forward. In his view, this translates as a need to promote biodiversity, for Wilson believes that humans have evolved in a symbiotic relationship with nature. A world of plastic would kill us humans, literally as well as metaphorically. For progress to continue, we must preserve the Brazilian rainforests and other areas of high organic density and diversity.

So, what does our history tell us? Three things. First, if the claim is that all contemporary evolutionism is merely an excuse to promote moral and societal norms, this is simply false. There is indeed a thriving area of more popular evolutionism, where evolution is used to underpin claims about the nature of the universe, the meaning of it all for us humans, and the way we should behave. I am not saying that this area is all bad or that it should be stamped out. I am all in favor of saving the rainforests. I am saying that this popular evolutionism—often an alternative to religion—exists. Third, we who cherish science should be careful to distinguish when we are doing science and when we are extrapolating from it, particularly when we are teaching our students. If it is science that is to be taught, then teach science and nothing more. Leave the other discussions for a more appropriate time. 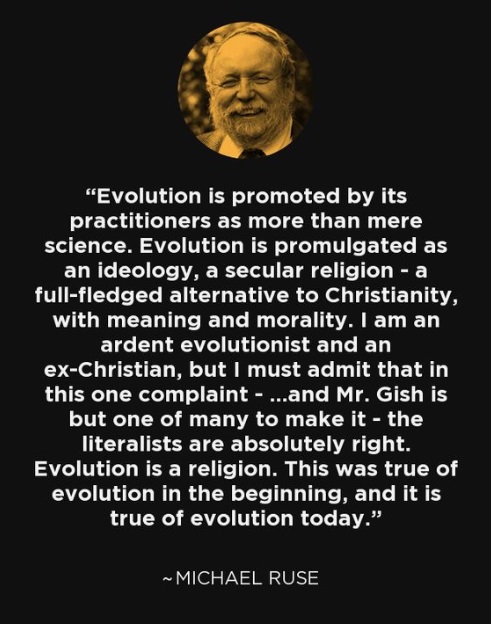 Defending the Christian Worlview, Creationism, and Intelligent Design » Theory of evolution » Is Evolution a Secular Religion?