Charles Darwin (1871) sagely noted over a century ago,
"ignorance more frequently begets confidence than does knowledge"

Stephen Hawking
“The greatest enemy of knowledge is not ignorance, it is the illusion of knowledge.”

garrulous,
having the habit of talking a lot, especially about things that are not important

Circumlocutions and a loquacious sesquipedalian.
talking too much and using grandiloquent words

Grandiloquent
pompous or extravagant in language, style, or manner, especially in a way that is intended to impress.

logorrhea
In psychology, logorrhea or logorrhoea (from Ancient Greek λόγος logos "word" and ῥέω rheo "to flow"), also known as press speech, is a communication disorder that causes excessive wordiness and repetitiveness, which can cause incoherency.

Sometimes, it seems as if some people's butt must be jealous of the quantity of waste that comes out of their mouth. Generally, people who know little, talk a lot, and those who know much speak little. While intelligent people are able to express a lot in a few words, limited people, in contrast, are able to talk much but say nothing

In essence, the skills that engender competence in a particular domain are often the very same skills necessary to evaluate competence in that domain—one's own or anyone else's. Because of this, incompetent individuals lack what cognitive psychologists variously term metacognition, metamemory, metacomprehension, or self-monitoring skills. These terms refer to the ability to know how well one is performing, when one is likely to be accurate in judgment, and when one is likely to be in error.

For any given skill, some people have more expertise and some have less, some a good deal less. What about those people with low levels of expertise? Do they recognize it?  People with substantial deficits in their knowledge or expertise should not be able to recognize those deficits. Despite potentially making error after error, they should tend to think they are doing just fine. In short, those who are incompetent, for lack of a better term, should have little insight into their incompetence—an assertion that has come to be known as the Dunning–Kruger effect. Because poor performers were choosing the responses that they thought were the most reasonable, this would lead them to think they were doing quite well when they were doing anything but.

4 HABITS OF STUPID PEOPLE THAT SMART PEOPLE DON’T HAVE
1. Stupid people blame others for their own mistakes
2. Stupid people always have to be right
3. Stupid people react when they realize their views were defeated with anger and aggression
4. Stupid people think they are better than everyone else

Some people are easily recognized by being descendants from the two families, Dunning and Kruger, and suffer from cognitive dissonance, and ultracrepidarianism.

They are descendants all from the same traditional family, and gained by heredity the Dunning–Kruger syndrome, which is a cognitive bias wherein people of low ability have illusory superiority, mistakenly assessing their cognitive ability as greater than it is. The cognitive bias of illusory superiority derives from the metacognitive inability of low-ability persons to recognize their own ineptitude; without the self-awareness of metacognition, low-ability people cannot objectively evaluate their actual competence or incompetence.

Furthermore, they cultivate the bad habit of ultracrepidarianism, which is the habit of giving opinions and advice on matters outside of one's knowledge.

And a big branch has evolved which thinks that willful ignorance is honourable and nothing to be ashamed of. " We don't know yet how everything came to be, but it wasn't God".

A good example is Richard Dawkins. He has little knowledge of theology but thinks he has the ability to criticise theism. He writes:

"Do you have to read up on leprechology before disbelieving in leprechauns?”

He might have forgotten the Chinese dictum: " Know your enemy".

Their common worldview follows common lines, like the strong faith in physicalism, where they are their own highest ultimate instance, there is nobody else above. They are usually full of certainty and right on everything, and when confronted with the fact that their mind, which has been developed in their view from the mind of the lower animals, the dissonance arises. Is what they believe is of any value or at all trustworthy? Would anyone trust in the convictions of a monkey's mind, if there are any convictions in such a mind?

They usually argue that they do not need God to live upon a high moral standard, only believers need God as crutches to avoid behaving like a jerk. And are blind by the fact that morals are prescriptive - and when there is no superior entity, objective moral values cannot exist.

Usually, these people have high confidence in science, peer review, and consensus, and what scientists postulate. But truth said Krugers resist to acknowledge where the evidence leads to. They held the opinion that chemicals self-assembled spontaneously by orderly aggregation without any higher guidance to create life,  and interference and that there is more than enough to show that man evolved from apes and all life from lower forms over a very long period of time — evolution.

DNA, the mechanism responsible, has every attribute of a software code or language, and both of these without exception in human history have been written by a writer - but they deny both. In their view, DNA is not a Code, and, logically do not need a coder.

They also argue that the founder of the most powerful force that forever changed the world,  Christ, did not exist, nor resurrected. He is the result of the fertile imagination of unnamed sheep herders of the bronze age - so they say.

Be cautious. Don’t be too certain of any claim that begins with: Once there was absolutely nothing. And that nothing exploded...... 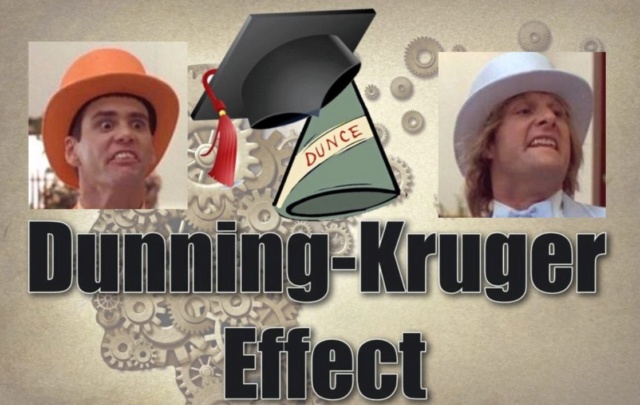 Cranio-rectal impaction, Ultracrepidarianism, The Dunning Kruger effect, Cognitive dissonance - the effects of the adoption of a false Worldview Tue Mar 12, 2019 6:17 am

Symptoms:
Commonly misdiagnosed among the general population, a patient with cranio-rectal impaction will present with gross ignorance of current events or sociopolitical issues yet remain very outspoken. Unlike someone who is simply misinformed, people with CAI will claim to be experts in all fields of knowledge and refuse to acknowledge any information contrary to their own point of view (from inside the rectum). CAI patients are often combative, obstinate and generally annoying to be around.

Treatment:
Standard treatment for CAI is difficult due to poor patient compliance. Symptomatic treatments via well-supported, cogent, arguments are usually useless, especially in cases of severe impaction. Family and friends of CAI patients are encouraged to take a hands-off approach and simply ignore the symptoms. Anecdotal evidence has suggested that unsuccessful attempts at treatment may exacerbate the symptoms, causing the patient’s head to be firmly impacted within the rectum.

Symptoms:
is the habit of giving opinions and advice on matters outside of one's knowledge. The term ultracrepidarian was first publicly recorded in 1819 by the essayist William Hazlitt in an open Letter to William Gifford, the editor of the Quarterly Review: "You have been well called an Ultra-Crepidarian critic." It was used again four years later in 1823, in the satire by Hazlitt's friend Leigh Hunt, Ultra-Crepidarius: a Satire on William Gifford.

The term draws from a famous comment purportedly made by Apelles, a famous Greek artist, to a shoemaker who presumed to criticise his painting.The Latin phrase "Sutor, ne ultra crepidam", as set down by Pliny and later altered by other Latin writers to "Ne ultra crepidam judicaret", can be taken to mean that a shoemaker ought not to judge beyond his own soles. That is to say, critics should only comment on things they know something about. The saying remains popular in several languages, as in the English, "A cobbler should stick to his last", the Spanish, "Zapatero a tus zapatos" ("Shoemaker, to your shoes"), the Dutch, "Schoenmaker, blijf bij je leest", the Danish "Skomager, bliv ved din læst", and the German, "Schuster, bleib bei deinen Leisten" (the last three in English, "cobbler, stick to your last")

Charles Darwin (1871) sagely noted over a century ago,
"ignorance more frequently begets confidence than does knowledge"

Stephen Hawking
“The greatest enemy of knowledge is not ignorance, it is the illusion of knowledge.”

4 HABITS OF STUPID PEOPLE THAT SMART PEOPLE DON’T HAVE
1. Stupid people blame others for their own mistakes
2. Stupid people always have to be right
3. Stupid people react when they realize their views were defeated with anger and aggression
4. Stupid people think they are better than everyone else

“Sometimes people hold a core belief that is very strong. When they are presented with evidence that works against that belief, the new evidence cannot be accepted. It would create a feeling that is extremely uncomfortable, called cognitive dissonance. And because it is so important to protect the core belief, they will rationalize, ignore and even deny anything that doesn't fit in with the core belief.”
-- Frantz Fanon

Symptoms:
In the field of psychology, cognitive dissonance is the mental discomfort (psychological stress) experienced by a person who holds two or more contradictory beliefs, ideas, or values. This discomfort is triggered by a situation in which a person’s belief clashes with new evidence perceived by the person. When confronted with facts that contradict beliefs, ideals, and values, people will find a way to resolve the contradiction to reduce their discomfort.

Treatment:
Get a sound worldview based on Christian theism, and instant cure is guaranteed.

Sealioning (also spelled sea-lioning and sea lioning) is a type of trolling or harassment which consists of pursuing people with persistent requests for evidence or repeated questions, while maintaining a pretense of civility and sincerity. It may take the form of "incessant, bad-faith invitations to engage in debate".

Refers to having a pointless debate with somebody utterly ignorant of the subject matter, but standing on a dogmatic position that cannot be moved with any amount of education or logic, but who always proclaims victory.

Re: The Dunning Kruger effect