Defending the Christian Worlview, Creationism, and Intelligent Design » Photosynthesis, Protozoans,Plants and Bacterias » Gas vesicles, another  ingenious mode of motility used by Cyanobacteria to float in the water

Gas vesicles, another  ingenious mode of motility used by Cyanobacteria to float in the water

Gas vesicles, another  ingenious mode of motility used by Cyanobacteria to float in the water Tue Jun 13, 2017 8:35 pm

A range of bacteria and archaea produce intracellular gas-filled proteinaceous structures that function as flotation devices in order to maintain a suitable depth in the aqueous environment. The wall of these gas vesicles is freely permeable to gas molecules and is composed of a small hydrophobic protein, GvpA, which forms a single-layer wall. In addition, several minor structural, accessory or regulatory proteins are required for gas vesicle formation. In different organisms, 8–14 genes encoding gas vesicle proteins have been identified, and their expression has been shown to be regulated by environmental factors. 1

The buoyancy organelles of aquatic microorganisms have to meet stringent specifications: allowing gases to equilibrate freely across the proteinaceous shell, preventing the condensation of water vapor inside the hollow cavity, and resisting collapse under hydrostatic pressures that vary with column depth. These properties are provided by the 7–8 kDa gas vesicle protein A (GvpA), repeats of which form all but small, specialized portions of the shell. 2 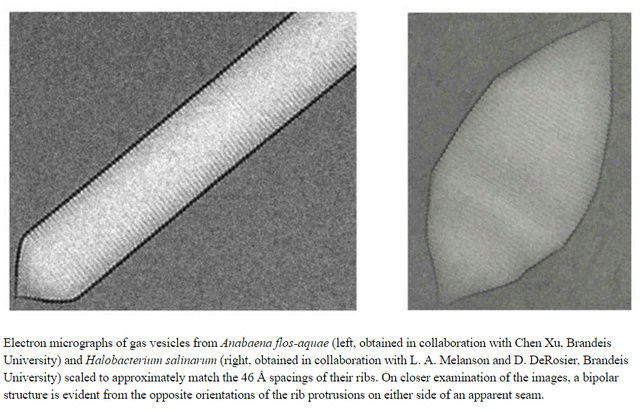 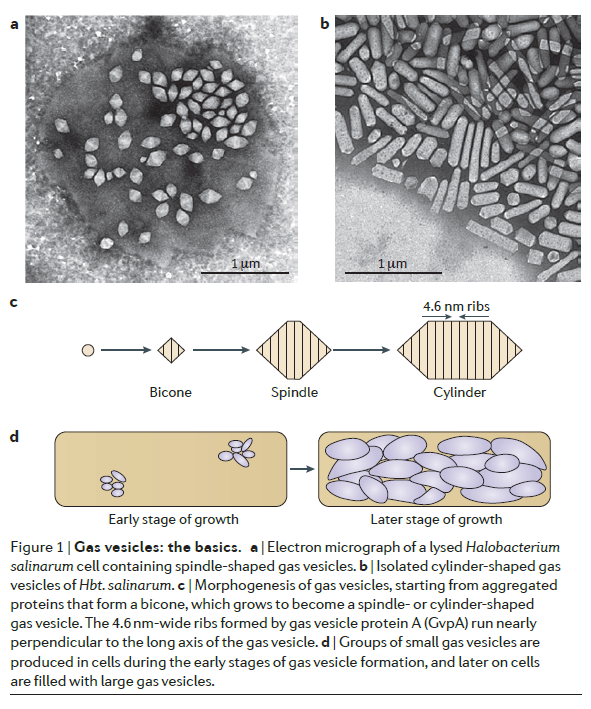 Various filamentous cyanobacteria's produce gas vesicles depending on the light intensity. Fewer gas vesicles are formed at high light intensities, whereas more are formed at low light intensities, to support an upwards movement towards the surface of the aqueous habitat. Gas vesicles provide buoyancy to cells when about 3–10% of the cell volume is occupied by gas. During the day, flotation at the surface exposes the cells to DNA-damaging ultraviolet light, so gas vesicle formation decreases. The carbohydrates that are produced during photosynthesis are considerably denser than water and could serve as ballast. It is the counteracting effects of gas vesicles and carbohydrate ballast that enable diurnal vertical migrations. Calculations of the extent of vertical repositioning for single cyanobacterial filaments yield an up–down movement of only a few centimeters per day, but large colonies of filamentous cyanobacteria might move tens of meters. Similarly, the green sulfur bacterium Pelodictyon phaeoclathratiforme reduces buoyancy by decreasing gas vesicle production and synthesizing carbohydrate ballast at high light intensities. These anoxygenic photosynthetic bacteria form discrete layers in the anoxic region of stratified lakes.

Cyanobacterial gas vesicles are permeable to oxygen, nitrogen, hydrogen, carbon dioxide, carbon monoxide, methane and even to perfluorocyclobutane (which has a molecular collision diameter of 0.63 nm, suggesting that the wall has pores of this size. 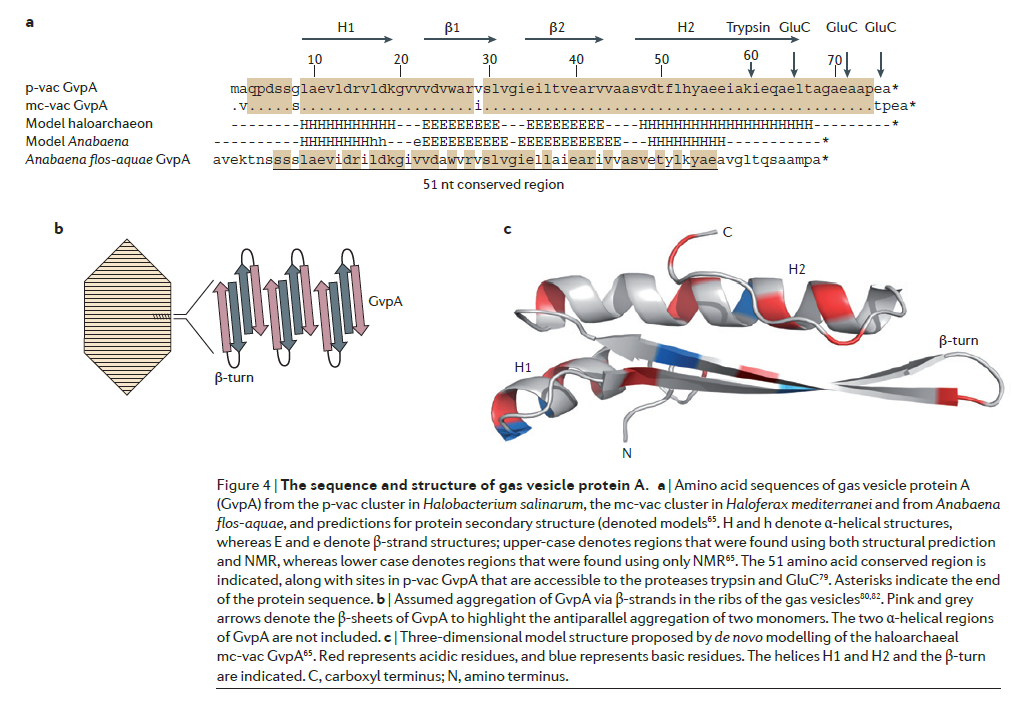 Defending the Christian Worlview, Creationism, and Intelligent Design » Photosynthesis, Protozoans,Plants and Bacterias » Gas vesicles, another  ingenious mode of motility used by Cyanobacteria to float in the water