Defending the Christian Worlview, Creationism, and Intelligent Design » Young and old earth Creationism » Was light created before the sun ?

Was light created before the sun ? 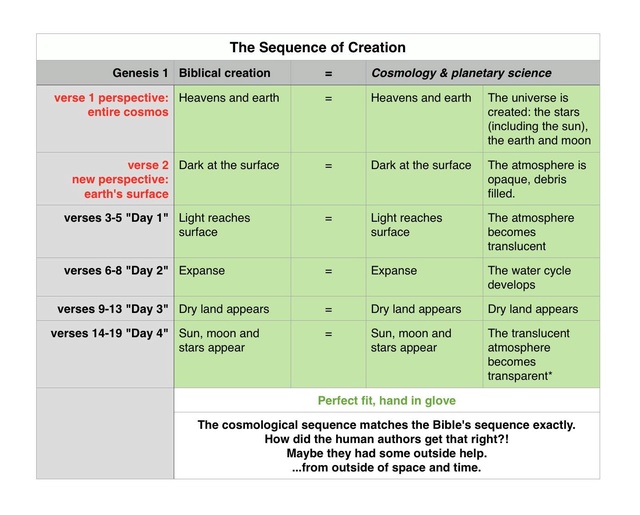 1. The slash ( / ) in "be/come" indicates that the verb rendering there can be either "be" or "become." (You're welcome to check the lexicons yourself on this if you wish.) "Be" sounds fairly passive, but "become" seems to imply something new that wasn't the case before. Both renderings are apparently valid, so I've used the slash to show this. Someone else who is more expert in Hebrew could perhaps say more definitively why one word vs. the other should be preferred here. "Become" seems to fit better with the idea that the developments of Day Four are something new and different compared to how they were before.

2. Re: "serve as signs"—we still call certain star constellations the 'signs of the zodiac' today. And we do know that the ancient Hebrews used a Lunar calendar and that they marked, as their descendants still mark too, the beginning of their day/night-cycle (24-hour) days at sunset—which means they think in terms of a daily night/day-cycle.

4. Day Four seems to me to be a new development compared to how things were before (previously, Day One = formation of Earth; Day Two = formation of Earth's atmosphere; Day Three = formation of Earth's oceans, continents, and plant life). Likewise, Day Five has to do with ocean-/water-based animal life and birds appearing on Earth. The first three days topically have to do with the formation/furnishing of our planet, as does Day Five, and so it seems likely that the topic of Day Four, which is sandwiched in-between Days 1-3 and 5, would also be 'Earth-furnishment.'

Thus, when God says "Let there be/come…" in Day Four, something new is described which wasn't that way before. My suggestion here is that the Sun, Moon, and stars are not being described in Day Four as being/becoming CREATED, but as being/becoming VISIBLE in the sky for the first time. I do think it's important to remember here in Day Four that humans aren't yet created (until Day Six), so the capability of Sun, Moon, and stars to function as "signs" for seasons, days, and years for humans becomes operative later, unless that function is mentioned here because it was already useful in the same way, for example, to angels (assuming their existence predates humans) or to some animals (e.g., the star-orienting/migrating birds). However, birds can't read Genesis though angels presumably can! Angels do show up on the surface of planet Earth elsewhere in the Old Testament, so an 'Earth's surface' frame of reference in Day Four makes some sense for them too, but it could have been employed merely for its relevance to humans later (i.e., reading Genesis 1, we humans would picture Day Four from the viewpoint of earth's surface where, until very recently, all human life was lived).

5. The "He made the stars also" problem at the end of verse 16—that particular rendering makes it sound as though God created the stars during Day Four—disappears completely if the final phrase is instead rendered "…and the dimmer light to dominate the night and the stars." The text makes better sense that way too because the Moon does indeed (still) dominate both the night (the dark sky at night generally) and the stars (by outshining them). There isn't nearly as much which the Sun obviously dominates in the daytime sky except for the Moon itself (at certain times of the month), Venus (near/at sunset or sunrise), Mercury (same), or the occasional, very bright comet. In contrast with the Sun, the Moon dominates thousands of other nighttime sky objects visible with the naked eye from Earth.

The upshot of Day Four is that, although plant life already existed—and therefore so must have the Sun, which provides its light to plants for photosynthesis (or else plants die in the dark without sunlight)—the Sun, Moon, and stars were not distinguishable through Earth's atmosphere as viewed from the ground (where the plants already are by Day Four, and where humans will be eventually too). So Day Four seems to be a description of the clearing of Earth's (formerly translucent—i.e., light-transmitting-but-scattering) atmosphere so that it becomes transparent (in general, excepting overcast days).

6. The two most compelling reasons I know of for thinking this is what Day Four pictures are: (A) the objects described—Sun, Moon, and stars—don't EXIST in Earth's atmosphere at all; they exist much farther away, in outer space. So the text saying "Let there be/come lights in the expanse of the sky" can't be a creatorial statement because the objects described do not EXIST "in" Earth's atmosphere at all, but only are VISIBLE "in" our sky—and (B) Earth's atmosphere would HAVE to become transparent in order to benefit those birds whose migrations are guided by star patterns.

7. So if Day Four is indeed describing the clearing of Earth's atmosphere, then the Sun, Moon, and stars were not CREATED on Day Four at all, but were merely MADE VISIBLE from a ground- or lower atmosphere-based perspective. And so it follows next that Sun, Moon, and Stars were already in existence BEFORE Day Four, and because Genesis 1 doesn't specify when they were created, I'm personally OK with the idea that God created Sun, Moon, and stars either before, or no later than, what's said in Genesis 1:1. And so too, for the same reason, I'm also OK with the idea that Sun and Earth formed at about the same time (as scientific theorizing about solar system formation also postulates), and that the solar system formed independently of the first- and (other) second-generation stars elsewhere in the universe.

Defending the Christian Worlview, Creationism, and Intelligent Design » Young and old earth Creationism » Was light created before the sun ?