Where can photosynthesis occur?  The answer depends on the energy of starlight, the atmosphere, the amount of water vapor, and the organisms equipped to harvest it. A new kind of photosynthetic bacterium was just discovered in a Yellowstone hot spring. 2 Exciting as this is (and the discoverer felt he had struck gold), the new species is just another tally among the bacteria and plants with the amazing ability to harvest light and produce energy for food and growth.  Some bacteria produce chemical energy from light in one step; plants and algae utilize light in two stages (photosystem I and II), and liberate oxygen in the process – an energy-intensive process.  They couldn’t do it, though, if Earth orbited most stars. John Raven took a look at this coupling between starlight and photosynthesis in Nature.

John Raven took a look at this coupling between starlight and photosynthesis in Nature : 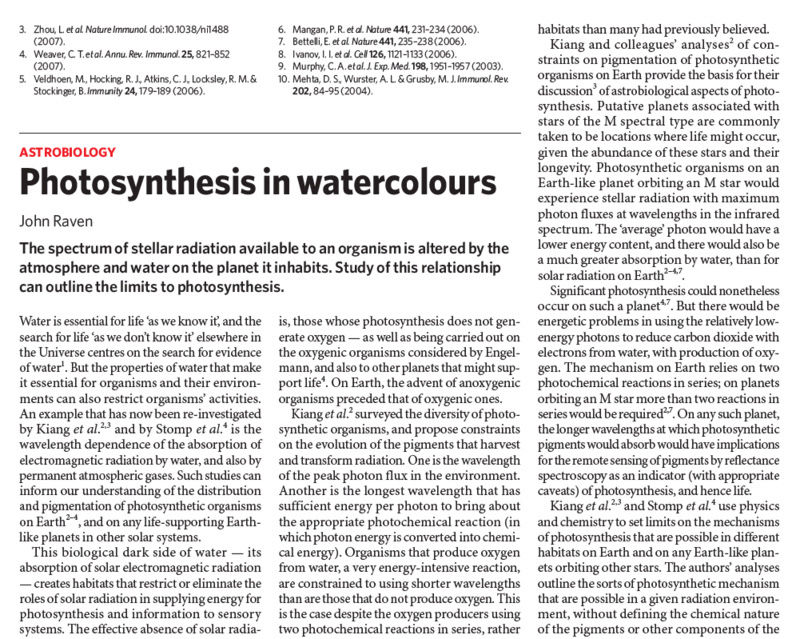 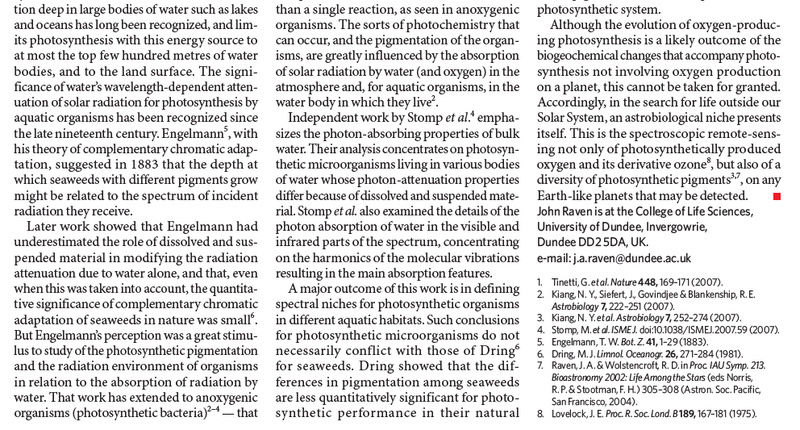 He reviewed some recent studies on how light energy penetrates atmospheres and bodies of water.  Water is an efficient absorber of solar energy; that’s why plants and seaweed are restricted to the photic zone of lakes and oceans, or to the land surface. “This biological dark side of water – its absorption of solar electromagnetic radiation – creates habitats that restrict or eliminate the roles of solar radiation in supplying energy for photosynthesis and information to sensory systems,” Raven noted.   What is the minimum energy required to trigger photosynthesis?  And what is the wavelength of the peak energy reaching the photic zone?  These questions yield answers about habitats on planets around other stars.  The “longest wavelength that has sufficient energy per photon to bring about the appropriate photochemical reaction (in which photon energy is converted into chemical energy)” sets physical constraints on photosynthesis, and thus on astrobiology.  Raven considered the likelihood that the plentiful M-type (red dwarf) stars could host life:

Putative planets associated with stars of the M spectral type are commonly taken to be locations where life might occur, given the abundance of these stars and their longevity.  Photosynthetic organisms on an Earth-like planet orbiting an M star would experience stellar radiation with maximum photon fluxes at wavelengths in the infrared spectrum.  The ‘average’ photon would have a lower energy content, and there would also be a much greater absorption by water, than for solar radiation on Earth. Significant photosynthesis could nonetheless occur on such a planet.  But there would be energetic problems in using the relatively low-energy photons to reduce carbon dioxide with electrons from water, with production of oxygen.  The mechanism on Earth relies on two photochemical reactions in series; on planets orbiting an M star more than two reactions in series would be required.  On any such planet, the longer wavelengths at which photosynthetic pigments would absorb would have implications for the remote sensing of pigments by reflectance spectroscopy as an indicator (with appropriate caveats) of photosynthesis, and hence life.

Speaking of pigments, Freeman Dyson speculated in an article for the New York Review of Books about why plants are green instead of black. He writes :

If the natural evolution of plants had been driven by the need for high efficiency of utilization of sunlight, then the leaves of all plants would have been black.  Black leaves would absorb sunlight more efficiently than leaves of any other color.  Obviously plant evolution was driven by other needs, and in particular by the need for protection against overheating.  For a plant growing in a hot climate, it is advantageous to reflect as much as possible of the sunlight that is not used for growth.  There is plenty of sunlight, and it is not important to use it with maximum efficiency.  The plants have evolved with chlorophyll in their leaves to absorb the useful red and blue components of sunlight and to reflect the green.  That is why it is reasonable for plants in tropical climates to be green.  But this logic does not explain why plants in cold climates where sunlight is scarce are also green.  We could imagine that in a place like Iceland, overheating would not be a problem, and plants with black leaves using sunlight more efficiently would have an evolutionary advantage.  For some reason which we do not understand, natural plants with black leaves never appeared.  Why not?  Perhaps we shall not understand why nature did not travel this route until we have traveled it ourselves.

From there, Dyson speculated about how humans may some day improve on photosynthesis.2  But perhaps he is right; plants know something we don’t.  They are obviously very good at making use of the light falling on “God’s green Earth” as Michael Medved calls it when signing off his radio program each day.  God’s black Earth somehow wouldn’t sound as nice.

Solar radiation is also just the right energy for the transitions in rhodopsin in our retinas that allow us to see the green plants.