Another uniqueness of the Earth is the temperatures suitable for life. If the solar system were billions of years old, the formation of the solar system, the Sun would have had to be  nearly one-third less luminous than it is now. It is postulated that certain greenhouse gases must have been present at higher concentrations to prevent the Earth from becoming a frozen planet. Carbon dioxide levels could not have been sufficiently high to compensate for the lower solar luminosity. The presence of other greenhouse gases, for example, ammonia or methane, is also problematical, as some propose that the Earth possessed an oxidative atmosphere 4  billion years ago. Moreover, ammonia is highly sensitive to solar UV radiation, and ammonia at levels required to influence the Earth’s temperature would have prevented photosynthetic organisms from fixing nitrogen (i.e., protein, DNA, and RNA synthesis would have been prevented). Fossil evidence suggests that photosynthetic organisms have been present on the Earth for at least 3.5 billion years. Methane also has an identical problem to ammonia; it is sensitive to solar UV radiation in an oxidative atmosphere. The problem is still unsolved, but some unique conditions have existed to prevent the Earth from becoming a planet frozen in solid ice in the early stages or a sweltering inferno at present. Scientists have reported a methane-metabolizing Archaea organisms in the extreme pressures of deep sea sediments. It has been estimated that these bacteria-like organisms consume 300 million tons of methane every year to prevent the Earth from turning into a furnace. If they had not been established at some point in the history of Earth, we probably would not have been here. On early Earth, the microbes might have been even more significant. Atmospheric scientists pointed out that methane levels in the atmosphere may have been 1000 times greater than they are today, initially formed by volcanoes and then by methane-producing microbes. Initially, methane may have been beneficial, producing a greenhouse effect that prevented the planet from freezing. However, if the rise in methane levels had gone unchecked, Earth might have become too hot for life to exist, as Venus.

My comment: The problem is, if these bacterias were not eating methane right from the beginning, there would be no life on earth.... there was no time to wait for these to evolve..... so the whole old earth scenario is questionable.


By devouring 300 million tons of methane each year, newly found archaea may help keep this greenhouse gas in check
Buried in the ocean floor are more than 10 trillion tons of methane-twice the amount of all known coal, oil, and other fossil fuels. Methane (CK) is also 25 times more potent, molecule for molecule, as a greenhouse gas than carbon dioxide is. That means that the ocean's hidden methane reservoirs could play havoc with the world's climate if they were to escape to the atmosphere. Yet most of the methane that does rise toward the surface of the ocean floor vanishes before it even reaches the water.  A team of researchers provided the clinching evidence for where all that methane goes: It is devoured by vast hordes of mud-dwelling microbes that microbiologists once said couldn't exist.  William Reeburgh of the University of California, Irvine, and other geochemists first stumbled on this enigma in the 1970s as they studied methane-rich regions of the ocean floor. Methane-producing microbes continually generate the gas deep below the ocean floor. But when the researchers checked the mud near the ocean floor's surface,  they found the methane had these gas-gobbling archaea they speculated, another group of microbes dwelling in the shallow mud was eating the methane and converting it to carbon dioxide.

Hinrichs and his co-workers at Woods Hole and the Monterey Bay Aquarium Research Institute in California discovered that the mud in the Eel River Basin, off the coast of California, was packed with organic molecules-- specifically, lipids from the cell walls of dead microbes. The lipids, they found, had a distinctive isotopic ratio suggesting they had been formed from methane. The researchers also found that the lipids had a structure that had been seen before only in archaea. (Archaea look superficially like bacteria, but they represent a separate domain of life.) Analyzing fragments of DNA collected from the sediments, Hinrichs and his coworkers confirmed in 1999 that the microbes were previously unknown archaea that make their homes in the mud. The following year a team of German researchers led by Antje Boetius of the Max Planck Institute for Marine Microbiology in Bremen -not the first look at the actual microbes. To do so, they fashioned probes that could latch onto the DNA sequences discovered at Eel River. The probes were designed to glow when they reached their target, revealing the archaea. Looking at the glowing archaea under a microscope, Boetius estimated that they were not solitary creatures. They lived in tightly packed clusters of about 100 individuals, surrounded by a shell of bacteria. Boetius and her co-workers gathered DNA from the bacteria and found that they belonged to a group of species that consume sulfates. "I was very surprised because it seemed to be too logical to be true:' jokes Boetius. In her report last year, Boetius proposed that the archaea and the bacteria live in some kind of biochemical symbiosis. The bacteria may use the waste products made by the archaea- such as molecular hydrogen and carbon compounds to help them get energy from sulfate.

At the same time, the bacteria might somehow allow the 2 archaea to feed on methane without oxygen. But as of 2000, neither team had direct evidence that these particular archaea were; actually feeding on methane. The only way to confirm those suspicions was to borrow a  tool from a very different field-an ion microprobe that had already revolutionized geology and paleontology.  Ion microprobes fire precise beams of ions at targets, blasting microscopic pits in their surface. The liberated atoms can then be measured to determine their isotopic composition. These instruments have enabled researchers to date the oldest minerals on Earth and to recognize the isotopic traces of the oldest signs of life. Christopher House of Pennsylvania State University, University Park, and his co-workers had recently adapted ion microprobes to measure the carbon isotopes found in individual microbes. "We went to a system where we dried the microbes on a piece of glass, and we found that it worked quite well," he explains. House teamed up with the researchers from Woods Hole and the Monterey Bay Aquarium to put the newly discovered archaea-bacteria aggregates in the sights of a microprobe. For the first time, the researchers succeeded in identifying the microbes and then directly measuring their carbon isotopes. And as they report in this issue, those isotopes clearly show that these specific archaea feed on methane and that the bacteria, in turn, get most or all of their carbon from the archaea.

Previous research on these microbes "was compelling, but this one is convincing," says Reeburgh. All that remains now is to determine exactly what sort of chemistry goes on between the two microbes. "We still don't know what chemicals are being processed. But I keep telling people, we're on the right street, we're approaching the house, and we're about to knock on the door." These methane-eating microbes-once thought to be impossible now look to be profoundly important to the planet's carbon cycle. Hinrichs and Boetius estimate that they devour 300 million tons of methane every year, about as much as humans now inject into the atmosphere with agriculture, landfills, and fossil fuel burning. But on early Earth. these microbes might have been even more significant. Atmospheric scientists have suggested that methane levels in the atmosphere may have been 1000 times higher than they are today, created initially by volcanoes and later by methane-producing microbes. At first, this methane may have been beneficial, creating a greenhouse effect that kept the planet from freezing. But if the rise in methane had gone unchecked, Earth might have become too hot for life, as Venus is today. We may have the evolution of methane-eating archaea to thank for saving us from that grim fate. "If they hadn't been established at some point in Earth's history," says Hinrichs, "we probably wouldn't be here." 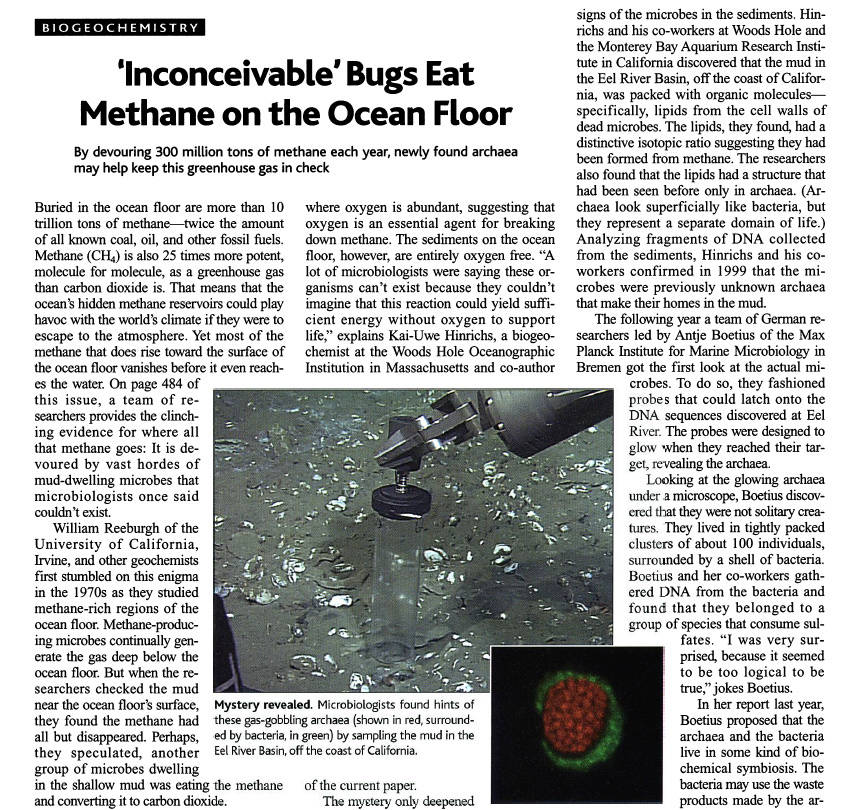