Does Intelligent Design / Creationism require to be science to explain best our existence ?

Does Intelligent Design / Creationism require to be science to explain best our existence ? Mon May 01, 2017 2:41 pm

"For the scientist who has lived by his faith in the power of reason, the story ends like a bad dream. He has scaled the mountains of ignorance; he is about to conquer the highest peak; as he pulls himself over the final rock, he is greeted by a band of theologians who have been sitting there for centuries."
(Robert Jastrow)

Once evolution is canceled out in a origins debate, and gaps of knowledge cannot be tapped with it, things become very clear and obvious.
The origin of the universe, its physical laws, the origin of stars, planets, galaxies, the chemical elements, the earth, and life, are due to
1. A creator
2. Unguided random lucky events by no mechanism at all.
According to the most generous mathematical criteria, 2 is impossible to unimaginable extremes. By eliminative induction, 1 is most probably true.

When debating origins, the best way to get clear conclusions is to choose topics with the clearest outcome of which proposition wins.
In the case of the origin of life, its really basically random unguided events by no mechanism, or design by an intelligent agency.
ID claims do not require to be tested and falsified to top the naturalistic viewpoint. ( i do not concede that ID  can't be tested, but it's not necessary )
By simple reasoning and calculations, we can conclude with absolute certainty, that naturalism has far less a possibility to be true, than intelligent design propositions and conclusions.

Proponents of Intelligent Design / Creationism are often accused of promoting religion, not science. Even IF that were true ( i disagree, the claim of intelligent design can easily be tested and falsified ), I do not see ANY reason that ID must be scientific to top and have the better explanatory power of origins, than any alternative explanation. Creationism is not about promoting advance in science, but is an inference of origins based on the most cause-adequate explanation, an intelligent agency,  in contrast to no agency at all, which is the opposing viewpoint. ID/Creationism does not require to make predictions or elaborate working models that can be tested to top naturalism (  I will explain soon, why ).  The case in dispute is not natural models against supernatural ones or religion against science. The dichotomy is a creative intelligent agency against none. No new working models or explanations need to be formulated or invented - neither to explain our origins and even less to provide scientific innovation. The claim that ID taps gaps of knowledge with God is not justified since we know by experience that intelligence can create languages, codes, translation systems, ciphers,  information, factories, complex machines and production lines ( cells are self-replicating factories ), while randomness is too unspecific. An atheist can also not invoke that his counterpart, a Theist, is less prepared or educated to debate origins. The case in question can be understood by any average educated person. The issue is not the knowledge of the opposing proponents, but if the evidence is best explained by a creative intelligent agency, or not. I do not see either why a creation model should go through peer review since this is a flawed process, which is done by biased people and based on philosophical naturalism, which excludes the mechanism of intelligence a priori as a possible cause of our origins.  Furthermore, the consensus in science is invoked only in situations where the science is not solid enough, besides being an appeal to authority.

Our choice relies on a simple dichotomy. Either the universe, its laws, and life came to be by random, unguided lucky events, or through the action of an Intelligent designer/creator, which stands for guided, reason based, directed, planned, projected, programmed, information based,  goal-constrained, willed causation by a conscient intelligent powerful eternal, non-caused agent.

Neither Evolution nor physical necessity is a driving force prior DNA replication: The origin of the first cell and life cannot be explained by natural selection (Ann N Y Acad, 2000)

The argument that chemical reactions in a primordial soup would not act upon pure chance, and that chemistry is not a matter of "random chance and coincidence", finds its refutation by the fact that the information stored in DNA is not constrained by chemistry. Yockey shows that the rules of any communication system are not derivable from the laws of physics.  He continues: “there is nothing in the physicochemical world that remotely resembles reactions being determined by a sequence and codes between sequences.” In other words, nothing in nonliving physics or chemistry obeys symbolic instructions.

Dembsky: We know from broad and repeated experience that intelligent agents can and do produce information-rich systems: we have positive experience-based knowledge of a cause that is sufficient to generate new instructional/specified complex information, namely, intelligence. Design constitutes an "inference to the best explanation" based on our best available knowledge.  It asserts the superior explanatory power of a proposed cause based upon its proven—its known—causal adequacy and based upon a lack of demonstrated efficacy among the competing proposed causes.  The problem is that nature has too many options and without design and intelligent guidance couldn’t sort them all out. Natural mechanisms are too unspecific to determine any particular outcome. An intelligent designer is a capable agent, able of planning, with the foresight of the end result, and the requirement of machines and pathways and manufacturing processes for an end goal and useful product.

The salient thing is that the individual parts and compartments of a biological cell, for example, have no function by their own. If a cell needs to do something, it whips up the right piece of the genome and transcribes it into RNA. The RNA is then translated into a sequence of amino acids, which together make up a protein the DNA coded for.  This protein is tagged with a shipping address. This is a marker consisting of several amino acids which tell the rest of the cell where this protein needs to go. There is machinery which acts on these instructions and delivers the protein, which is potentially on the outside of the cell. The delivery instruction is then stripped off and several post-processing steps may be performed, possibly activating the protein - which is good, because you may not want to transport an active protein through places where it should not do work. All this had to be full setup, besides a full working DNA replication mechanism, with at least 30 irreducible protein complexes.  The machinery required for all these processes is staggeringly complex. And had to be fully operational when life began. All these processes had to emerge ALL AT ONCE, No stepwise manner is possible. Several theoretical and experimental studies have endeavored to derive the minimal set of genes that are necessary and sufficient to sustain a functioning cell under ideal conditions, that is, in the presence of unlimited amounts of all essential nutrients and in the absence of any adverse factors, including competition. A comparison of the first two completed bacterial genomes, those of the parasites Haemophilus influenzae and Mycoplasma genitalium, produced a version of the minimal gene set consisting of ~250 genes, and about the same number of proteins, which must be interconnected in the right way to form a minimal metabolism network, consisting of  50 enzymes/proteins required to create a metabolic network implemented  for the hypothetical minimal cell. These systems are INTERDEPENDENT and IRREDUCIBLE. And it could not be through evolution, since evolution depends on fully working self-replicating cells, in order to function.

The simplest known free-living organism, Mycoplasma genitalium, has 470 genes that code for 470 proteins that average 347 amino acids in length. The odds against just one specified protein of that length are 1:10^451.

Luck/chance/probability could theoretically form the right amino acid chain to form a helicase essential for DNA replication and arrange to find only left-handed amino acids, but it could  also select racemic, that is right and left-handed amino acids, and grow and attach them in any polypeptide sequence, most of which have no biological advantage and will not fold in the correct three-dimensional form . Natural mechanisms have no constraints, they could produce any kind of novelty. It's, however, that kind of freedom that makes it extremely unlikely that mere natural developments provide new specific biologically advantageous arrangements that add to get the first go of life.  Nature would have to arrange almost an infinite number of trials and errors until getting a new positive arrangement. Since that would become a highly unlikely event, design is a better explanation. This situation becomes even more accentuated when natural selection is not a possible constrained since evolution depends on replication, which did not exist prior DNA replication.

Intelligent agents act frequently with an end goal in mind, constructing functional irreducibly complex multipart-machines, and make exquisitely integrated circuits that require a blueprint to build the object. Furthermore, Computers integrate software/hardware and store high levels of instructional complex coded information. In our experience, systems that either a)require or b)store large amounts of specified instructional complex information such as codes and languages, and which are constructed in an interdependence of hard and software invariably originate from an intelligent source. No exception.

All these are obvious facts to the unbiased observer, and permits to conclude ID as the most adequate explanation of the case of origins of our existence. There is no requirement to formulate working models, scientific hypotheses or theories. All that is required, is a unbiased mind, and logical reasoning, and simple evaluation of the capacity of the two competing models. Doing so, it should not be too difficult to find the best explanation. 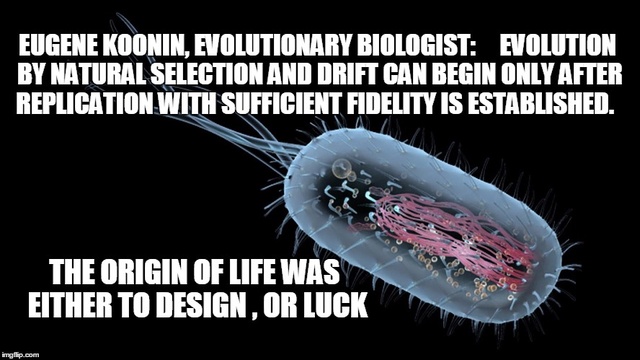