Defending the Christian Worldview, Creationism, and Intelligent Design » Origin of life » Chemistry » Sulfur and the Sulfur cycle, essential for life

Sulfur and the Sulfur cycle, essential for life

Sulfur is an essential element for all life, but almost always in the form of organosulfur compounds or metal sulfides. Three amino acids (cysteine, cystine, and methionine) and two vitamins (biotin and thiamine) are organosulfur compounds. Many cofactors also contain sulfur including glutathione and thioredoxin and iron–sulfur proteins. Disulfides, S–S bonds, confer mechanical strength and insolubility of the protein keratin, found in outer skin, hair, and feathers. Sulfur is one of the core chemical elements needed for biochemical functioning and is an elemental macronutrient for all living organisms. 6

Sulfur is an essential nutrient for plant growth and development. In plant sulfur assimilation, cysteine biosynthesis plays a central role in fixing inorganic sulfur from the environment into the metabolic precursor for cellular thiol- containing compounds. 7

The Sulfur cycle 4
The sulfur cycle is the collection of processes by which sulfur moves to and from minerals (including the waterways) and living systems. Such biogeochemical cycles are important in geology because they affect many minerals. Biochemical cycles are also important for life because sulfur is an essential element, being a constituent of many proteins and cofactors .

Steps of the sulfur cycle are: 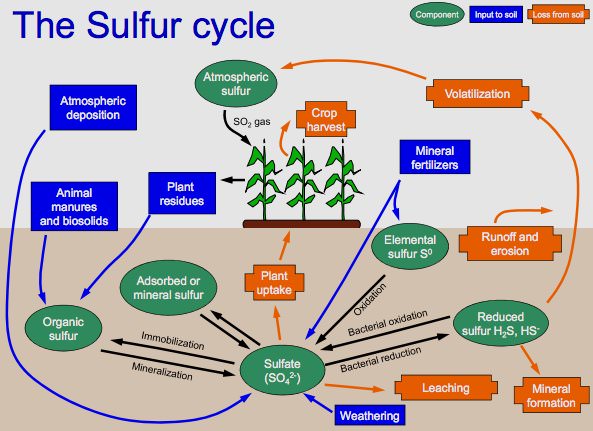 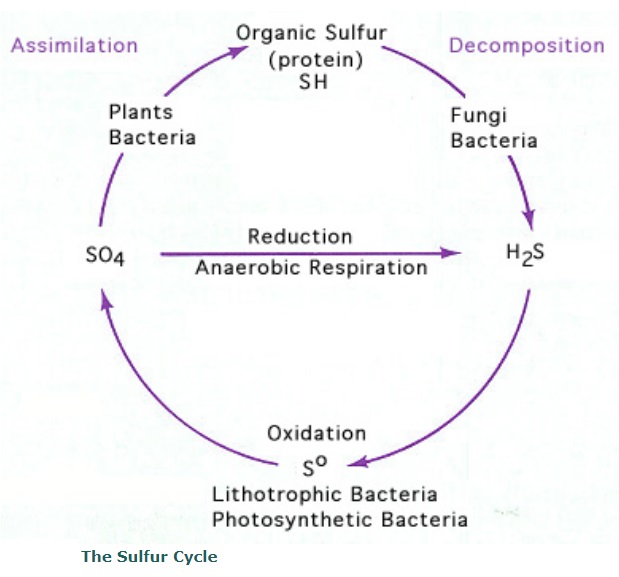 Sulfur is a component of a couple of vitamins and essential metabolites and it occurs in two amino acids, cysteine and methionine. In spite of its paucity in cells, it is an absolutely essential element for living systems. Like nitrogen and carbon, the microbes can transform sulfur from its most oxidized form (sulfate or SO4) to its most reduced state (sulfide or H2S). The sulfur cycle, in particular, involves some unique groups of procaryotes and procaryotic processes. Two unrelated groups of procaryotes oxidize H2S to S and S to SO4. The first is the anoxygenic photosynthetic purple and green sulfur bacteria that oxidize H2S as a source of electrons for cyclic photophosphorylation. The second is the "colorless sulfur bacteria" (now a misnomer because the group contains many Archaea) which oxidize H2S and S as sources of energy. In either case, the organisms can usually mediate the complete oxidation of H2S to SO4.

Sulfur-oxidizing procaryotes are frequently thermophiles found in hot (volcanic) springs and near deep-sea thermal vents that are rich in H2S. They may be acidophiles, as well, since they acidify their own environment by the production of sulfuric acid.

Since SO4 and S may be used as electron acceptors for respiration, sulfate-reducing bacteria produce H2S during a process of anaerobic respiration analogous to denitrification. The use of SO4 as an electron acceptor is an obligatory process that takes place only in anaerobic environments. The process results in the distinctive odor of H2S in anaerobic bogs, soils and sediments where it occurs.

Sulfur is assimilated by bacteria and plants as SO4 for use and reduction to sulfide. Animals and bacteria can remove the sulfide group from proteins as a source of S during decomposition. These processes complete the sulfur cycle.

Sulfur is the third most abundant mineral in the body, about half concentrated in your muscles, skin and bones, and is essential for life. Sulfur makes up vital amino acids used to create protein for cells and tissues and for hormones, enzymes, and antibodies. The body uses up its store daily so it must be continually replenished for optimal health and nutrition.1 Sulfur is metabolized by all organisms, from bacteria and archaea to plants and animals. Sulfur is reduced or oxidized by organisms in a variety of forms. The element is present in proteins, nucleic acids, sulfate esters of polysaccharides, steroids, phenols, and sulfur-containing coenzymes

Sulfur is an element of surprising importance in our health. 2 It's a unique part of the protein in our food because most foods contain at least small amounts of sulfur amino acids, including taurine, methionine, and cysteine. Sulfur is critical in our ability to detoxify unwanted contaminants, and many contaminants in our food cannot be eliminated from our body without the help of sulfur. This element is also essential in our body's antioxidant protection, and many of our most critical antioxidant molecules—including glutathione—are sulfur-containing. Sulfur also plays a unique role in the structure of our connective tissue, through its incorporation into molecules like glucosamine sulfate and chondroiton sulfate. So as you can see, this mineral is truly "whole body" in its health support role. 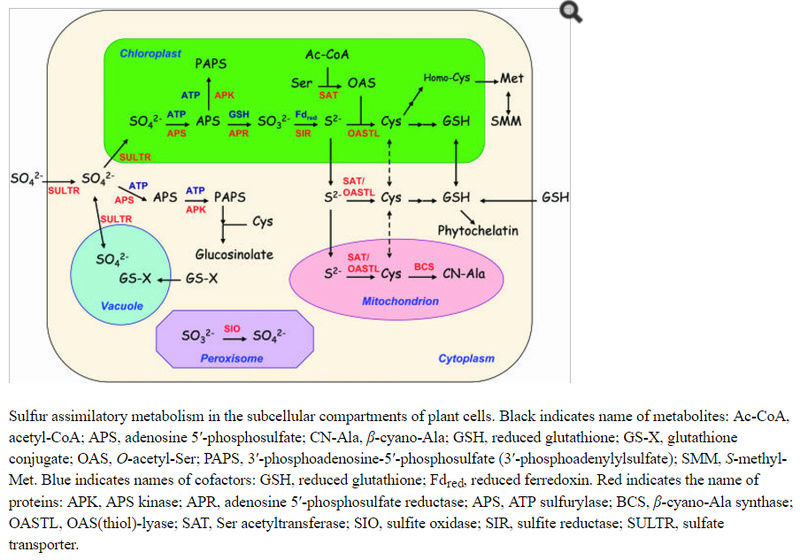 The form of sulfur found in xylem and phloem sap is also primarily sulfate, thus translocation of sulfur throughout the plant is mostly via unmetabolized sulfate. Subsequently, sulfate is subjected to activation to adenosine 5′-phosphosulfate (5′-adenylylsulfate [APS]) for further conversion. The major assimilatory pathway is reduction of APS to sulfite (SO32−) and then sulfide (S2−). The overall reduction from sulfate to sulfide requires one ATP and eight electrons. Sulfide is then coupled with O-acetyl-Ser (OAS) that is formed from Ser, yielding Cys.

SULFATE UPTAKE AND TRANSLOCATION IS MEDIATED BY SPECIALIZED MEMBRANE PROTEINS

Sulfur metabolism in Bacteria, with emphasis on Escherichia coli and Bacillus subtilis

Operon cysDNC codes for subunit 2 of sulfate adenylyltransferase, subunit 1 of ATP sulfurylase (ATP:sulfate adenylyltransferase) and adenylylsulfate kinase. Genes cysZ and cysK may not be co-transcribed, although they are neighbours in the chromosome. CysZ is Bacterial transporters for sulfate and organosulfur compoundsprobably a membrane protein, but its function is unknown. CysK is O-acetylserine sulfhydrylase, phylogenetically related to tryptophane synthase

Sulfur's presence makes it possible to synthesize a greater variety of amino acids – the molecules that link to form protein chains – and gives nascent life a larger palette of chemicals from which to select. 3

Sulfate Assimilation
Sulfur is an essential nutrient for all organisms. The majority of sulfur in nature is found in inorganic form of sulfate, which has to be reduced and incorporated into bioorganic compounds. Assimilatory sulfate reduction occurs in various chemotrophic bacteria and fungi and in photosynthetic organisms but is missing in animals and most prokaryotic and eukaryotic obligate parasites. Despite its central position in plant primary metabolism, the question of evolution of the pathway and origin of plant genes involved in sulfate assimilation has never been addressed. We have therefore made use of the vast amount of available sequence data to perform a phylogenetic analysis of sulfate assimilation genes from a range of lineages of photosynthetic organisms including photosynthetic bacteria, primary symbionts such as plants, green and red algae and various secondary and tertiary symbionts. The analysis revealed very complicated relations between the different lineages and different  histories of the individual genes of the pathway. Whereas, for example, plant sulfite reductase is clearly of a cyanobacterial origin, the other genes in the pathway, although being plastidial are, unusually, not of cyanobacterial origin. The clear separation between adenosine phosphosulfate- and phosphoadenosine phosphosulfate-reducing organisms seen in previous analyses has been lost with the inclusion of genes from diatom and cryptomonad secondary symbiont algae. In fact, a new variant of the key enzyme of sulfate assimilation, adenosine 5′-phosphosulfate reductase, lacking an iron-sulfur cofactor, has been discovered. In addition, many interesting fusion proteins between various components of the pathway were uncovered in the newly sequenced algal genomes which open new exciting opportunities to improve the efficiency of the pathway or some of its reactions. In the chapter, protein phylogenies of seven enzymes of the pathway will be discussed in detail with relation to distribution of enzyme variants among prokaryotic and eukaryotic
lineages, origin of plant genes, and the origin of genes in algae with secondary and tertiary plastids.

Sulfur occurs in nature in various oxidation states in inorganic, organic, and bioorganic compounds. Sulfur can readily change its oxidation state, therefore oxidized sulfur compounds serve as terminal electron acceptors in respiration of sulfate reducing bacteria and reduced sulfur compounds support chemotrophic or phototrophic growth of many bacteria and Achaea as electron donors. Sulfur is an essential nutrient for all organisms as it is part of cysteine and methionine, sulfur containing proteogenic amino acids with frequent catalytic and structural functions, coenzymes and prosthetic groups such as iron–sulfur clusters, thiamine, lipoic acid, coenzyme A, etc. In these metabolites sulfur is in a reduced form, however, the major form of sulfur available in nature is in the oxidized form of sulfate. Many microorganisms, algae, plants and fungi (but not animals) are able to take the sulfate up, reduce it and incorporate in amino acids in the pathway of assimilatory sulfate reduction. 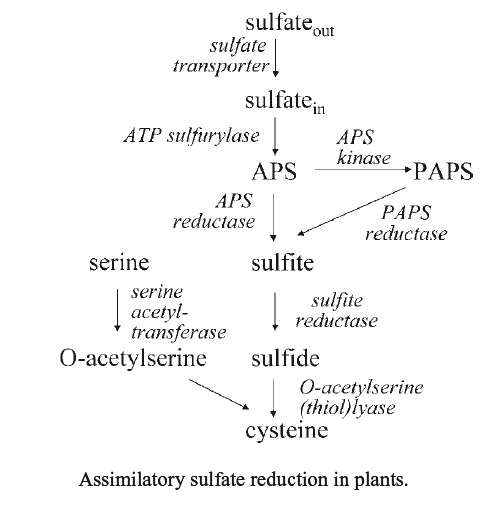 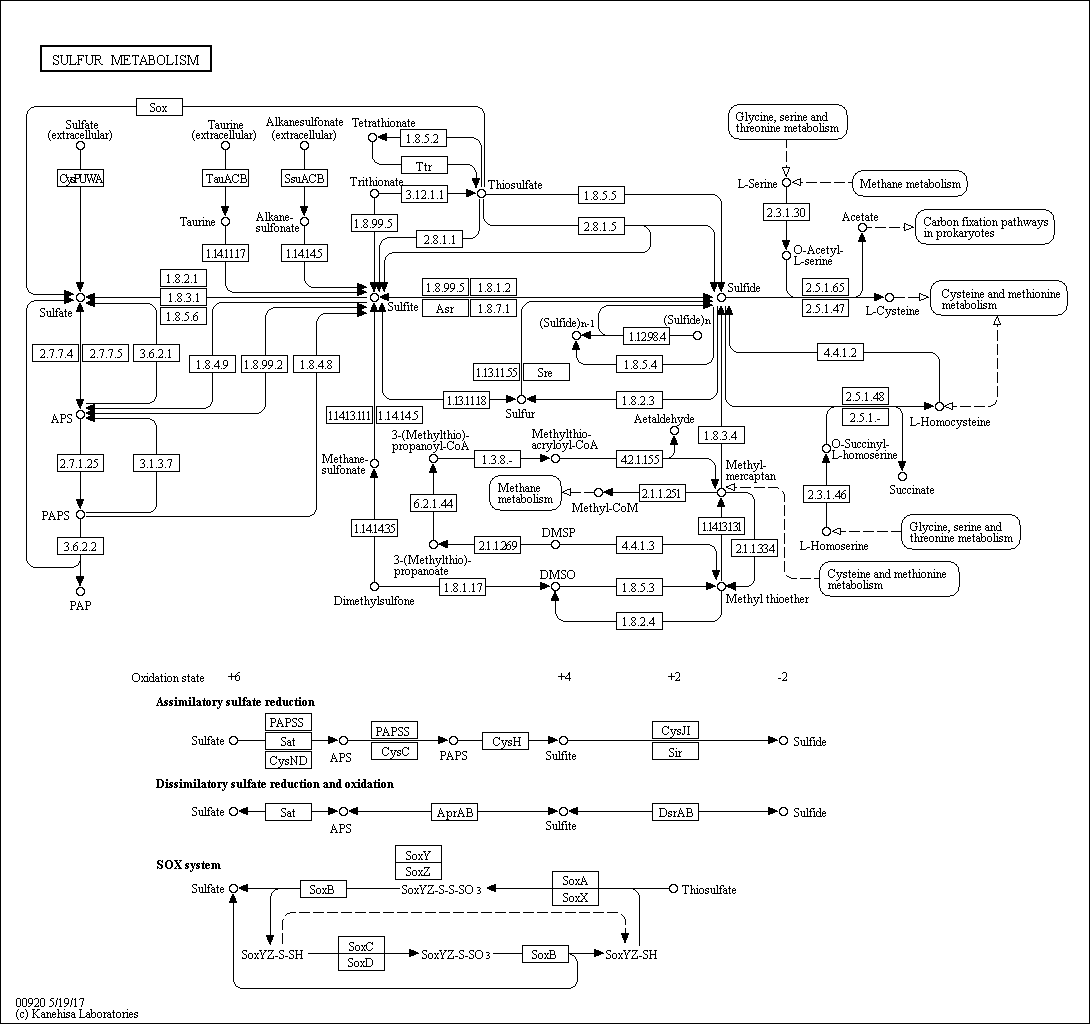 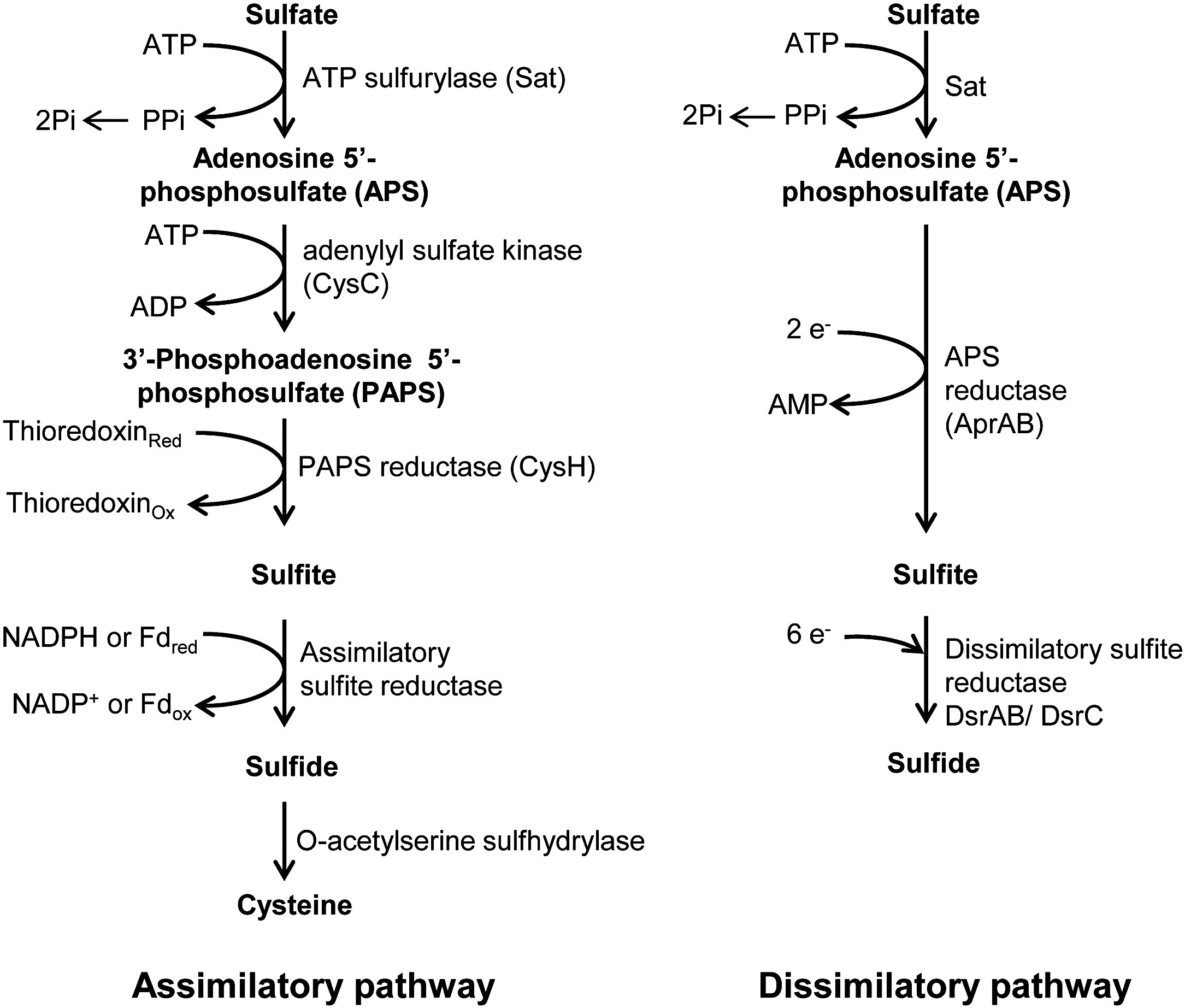 Sulfur is an essential element for life and the metabolism of organic sulfur compounds plays an important role in the global sulfur cycle. Sulfur occurs in various oxidation states ranging from +6 in sulfate to -2 in sulfide (H2S). Sulfate reduction can occur in both an energy consuming assimilatory pathway and an energy producing dissimilatory pathway.

The assimilatory pathway, which is found in a wide range of organisms, produces reduced sulfur compounds for the biosynthesis of S-containing amino acids and does not lead to direct excretion of sulfide.

In the dissimilatory pathway, which is restricted to obligatory anaerobic bacterial and archaeal lineages, sulfate (or sulfur) is the terminal electron acceptor of the respiratory chain producing large quantities of inorganic sulfide. Both pathways start from the activation of sulfate by reaction with ATP to form adenylyl sulfate (APS).

In the dissimilatory pathway APS is directly reduced to sulfite, and sulfite is further reduced to sulfide by the dissimilatory sulfite reductase. The capacity for oxidation of sulfur is quite widespread among bacteria and archaea, comprising phototrophs and chemolithoautotrophs. The SOX (sulfur-oxidation) system is a well-known sulfur oxidation pathway and is found in both photosynthetic and non-photosynthetic sulfur-oxidizing bacteria. Green sulfur bacteria and purple sulfur bacteria carry out anoxygenic photosynthesis with reduced sulfur compounds such as sulfide and elemental sulfur, as well as thiosulfate (in some species with the SOX system), as the electron donor for photoautotrophic growth. In some chemolithoautotrophic sulfur oxidizers (such as Thiobacillus denitrificans), it has been suggested that dissimilatory sulfur reduction enzymes operate in the reverse direction, forming a sulfur oxidation pathway from sulfite to APS and then to sulfate.

Defending the Christian Worldview, Creationism, and Intelligent Design » Origin of life » Chemistry » Sulfur and the Sulfur cycle, essential for life