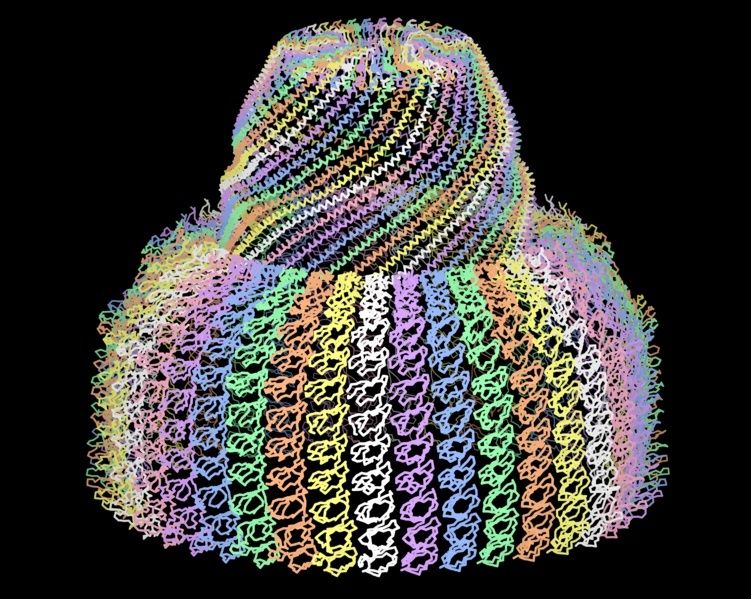 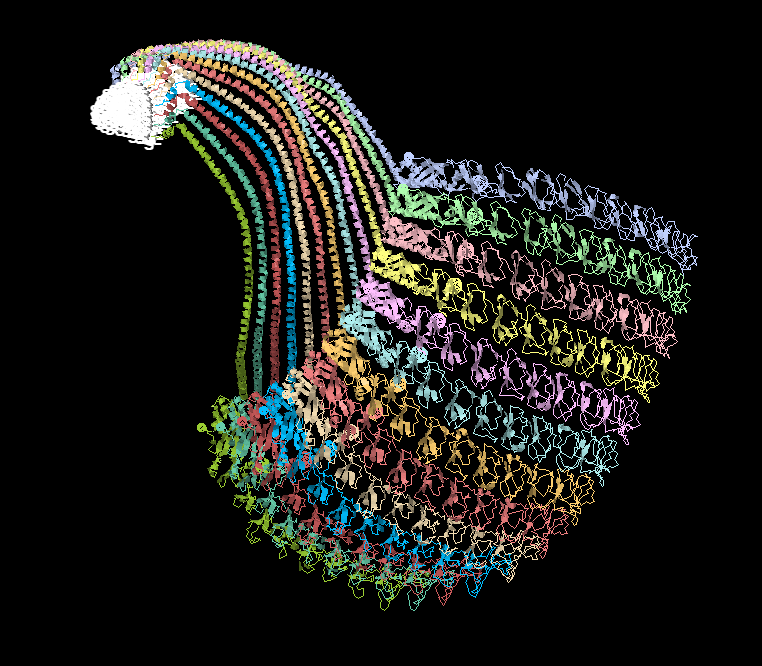 In a time in which efficient 3D manufacturing is predicted to have a revolutionary effect on mankind, nature unveils that it has already been using this technique for millions of years. Vaults are very large ribonucleoprotein particles found widely in eukaryotes. Our discovery of the unique assembly mechanism of the vault particle reveals an unforeseen function of the polyribosome as a very sophisticated cellular 3D nanoprinter. 4

Three-dimensional printers fabricate a gamut of products such as medical devices, toys, and even specialty chocolates. Now a new study suggests that eukaryotic cells evolved a 3-D nanoprinter millions of years ago, in the form of polyribosomes. These clusters of ribosomes strung along a single messenger RNA appear to be responsible for the intricate 3-D assembly of a mysterious large, barrel-shaped protein complex called the vault particle 5

“I had never in my life seen anything like these rolls,” Mrazek says. “Normally, when you get misassembled proteins you see ugly tangles, but these were so symmetric.” Mrazek concluded that the rolls must reflect structural intermediates during the vault assembly process. Ribosomes moving along an mRNA normally synthesize individual protein strands, which then come off the ribosome and fold into their 3-D shapes. On the basis of the proposed helical geometry of the polyribosome, Mrazek hypothesized that as an individual MVP molecule gets translated by a ribosome in the cluster, it could form a dimer with the MVP synthesized by the ribosome next to it. As they’re formed, adjacent dimers could then arrange side by side to form the vault particle. The vaults take shape bit by bit as the dimers are completed and come off the polyribosome, much like a 3-D printer might build up the layers of a plastic object. The sixth mutation in the MVP somehow disrupts the pinching off of the vault particle after the 39th dimer assembles, resulting in the long, rolled-up vaults. 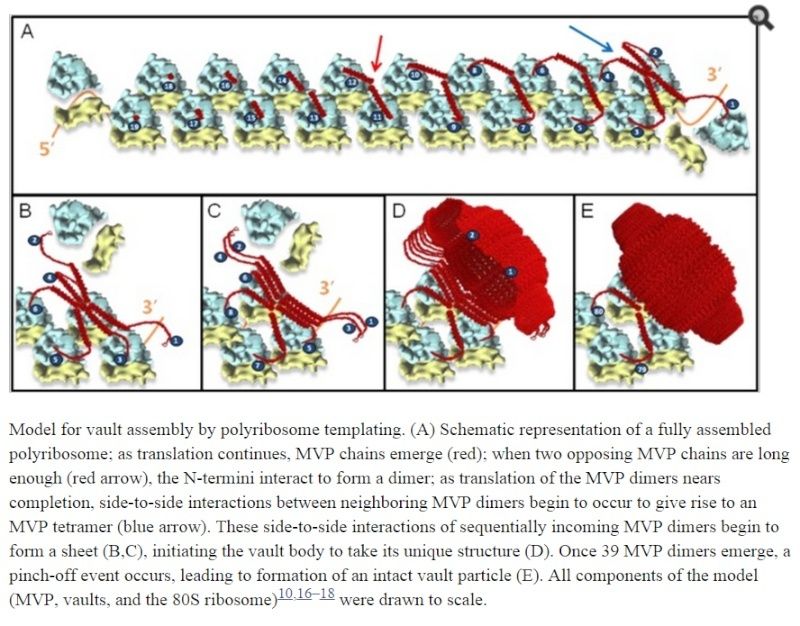 Ribosomes are molecular machines that function in polyribosome complexes to translate genetic information, guide the synthesis of polypeptides, and modulate the folding of nascent proteins. Here, we report a surprising function for polyribosomes as a result of a systematic examination of the assembly of a large ribonucleoprotein complex, the vault particle. Structural and functional evidence points to a model of vault assembly whereby the polyribosome acts like a 3D nanoprinter to direct the ordered translation and assembly of the multi-subunit vault homopolymer, a process which we refer to as polyribosome templating. Structure-based mutagenesis and cell-free in vitro expression studies further demonstrated the critical importance of the polyribosome in vault assembly. Polyribosome templating prevents chaos by ensuring efficiency and order in the production of large homopolymeric protein structures in the crowded cellular environment and might explain the origin of many polyribosome-associated molecular assemblies inside the cell. 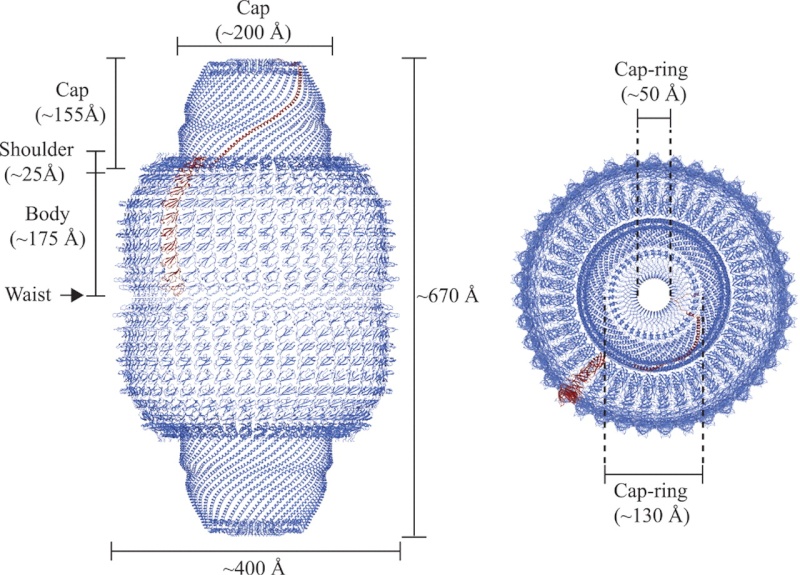 Polyribosomes May Act As 3-D Nanoprinters To Fabricate Vault Particles 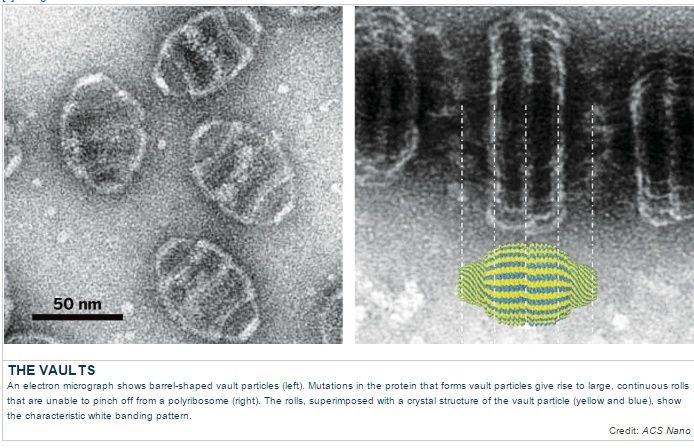 Vaults are large barrel-shaped ribonucleoprotein particles that are highly conserved in a wide variety of eukaryotes (1). Although several functions have been proposed for vaults since their discovery in 1986 (2–10), including roles in multidrug resistance, cell signaling, and innate immunity, their cellular function remains unclear. Most vault particles are present in the cytoplasm, but a few of them localize to the nucleus 1


The proposal that vaults could act as a cellular transporter implies that these particles must present a highly regulated opening mechanism in order to efficiently incorporate and deliver the specific vault cargo. Even so, both the precise regulation of the opening mechanism and the structural characteristics that can allow such surprising dynamics still have to be clearly defined 2

A 2014 paper found “a surprising function for polyribosomes as a result of a systematic examination of the assembly of a large ribonucleoprotein complex, the vault particle”. Beyond merely orienting ribosomes in crowded conditions to avoid aggregation of freshly produced peptides, polyribosomes act “like a 3D nanoprinter” spinning out the many copies needed for this homopolymer, which they called ‘polyribosome templating’. That is, the interactions are not being minimised for fear of dangerous aggregation, but controlled to orchestrate favourable interactions to produce vaults. 3 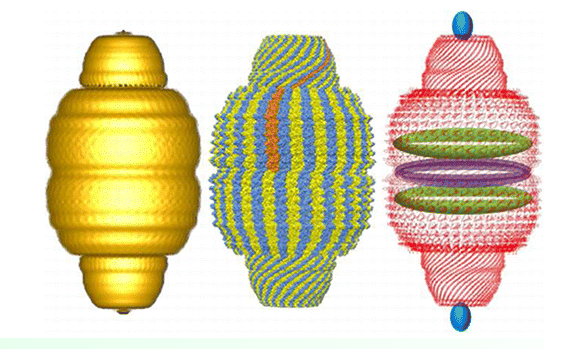 So how are Vaults and their " made of " best explained ? Design, or natural mechanisms ? We have only recently developed 3d print technology. Its the most advanced engeneering and technology human kind has been able to develop so far. This proceeding is applied through nano machines since life exists. That is in my view a amazing example which points to a intelligent designer as the source of the Polyribosome which make the Vaults, and the Vault particles itself. 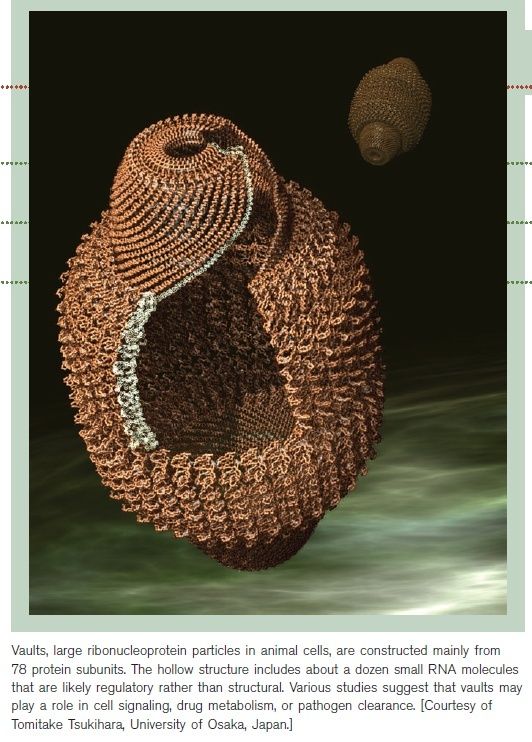 Vaults are composed of many copies of the major vault protein, which assembles to form a hollow football-shaped shell. The one shown here is from rat liver cells (PDB entries 4V60) and contains 78 copies of the protein. Inside cells, the vault also encloses a few other molecules, which were not seen in the crystal structure because they don't have a symmetrical structure inside the vault. These molecules include several small RNA molecules, a protein that binds to RNA, and an enzyme that adds nucleotides to proteins.

Mystery of the Vault

Vaults still pose great mysteries. Researchers have been struggling to find out what they do. They are found in many types of cells (each of our own cells contain about 100,000 of them) but some organisms, such as fruit flies and yeast cells, don't have them at all. They are often found in the cytoplasm, where they are transported rapidly from site to site. But, they are also found occasionally in the nucleus, and even more interestingly, they have been found in nuclear pores. These findings, along with lots of other observations, suggest that vaults may be used for transport. Definitive proof, however, still remains to be discovered. 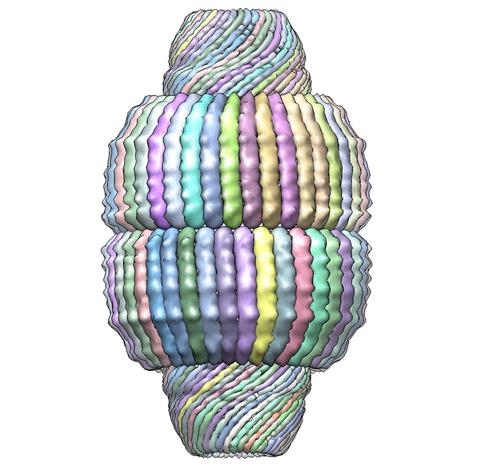 Vault particles are large, barrel-shaped nanoparticles found in the cytoplasm of all mammalian cells. All human cells so far analyzed have been shown to contain vaults with quantities varying from a few thousand per cell to in excess of 100 000 per cell. As naturally occurring nanoscale capsules, vaults may be useful to engineer as therapeutic delivery vehicles. The particles can be produced in large quantities and are assembled in situ from multiple copies of the single structural protein following expression. Using molecular engineering, recombinant vaults can be functionally modified and targeted, and their contents can be controlled by packaging.

A review article in ACS Nano ("Development of the Vault Particle as a Platform Technology") by Leonard H. Rome and Valerie A. Kickhoefer from UCLA, takes a look at the development of engineered vaults as a platform for a wide variety of therapeutic applications and examines future directions for this unique nanoparticle system.
Rome's lab website on UCLA has extensive information about vault nanoparticle research and the team have published numerous studies (see for instance "Nanoscale vaults encapsulate nanodisks for drug delivery" and "Natural protein vaults for nanotechnology cargo applications").
As researchers began to analyze vault expression in insect cells, they conceived the idea that these vault particles could also be engineered in the lab. They finally concluded that the entire vault structure could be formed by assembly of multiple copies of just one protein (named the major vault protein, or MVP) – a surprising finding. While earlier models predicted a structure that contained 96 MVP copies per vault, the currently predominant opinion seems to be that 78 copies is the right number. However, the possibility still remains that vaults may have a variable number of MVPs (78 (± n). 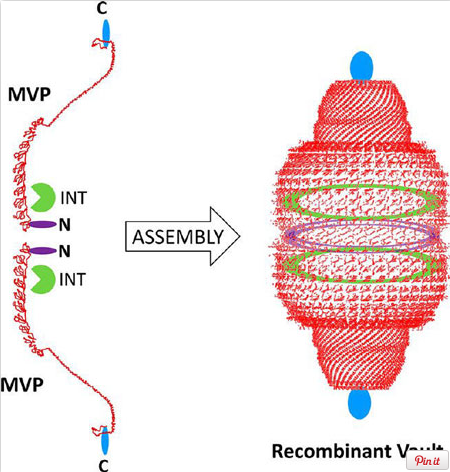 Schematic diagram of vault engineering. Two single MVP chains are illustrated on the left in red with the locations indicated where additional amino acids can be added at the N-terminus (purple) and C-terminus (blue). The INT peptide is illustrated in green aligned with its binding site on MVP. Assembly of the various MVP chains into a vault is illustrated on the right. The purple MVP N-terminal peptide extensions are located on the interior surface of the engineered vault particles at the waist (shown as two purple discs). The blue MVP C-terminal peptide extensions are located on the exterior surface of the particles at the end of the caps. When vaults are packaged with exogenous proteins fused to the INT domain, these proteins form two rings of density inside the particle (shown as two green discs). (Reprinted with permission from American Chemical Society)
The biocompatibility of vaults and the ability to encapsulate and protect fluorescent materials inside provides a wide range of possibilities for vaults as inert markers for biological imaging. Moreover, understanding how to encapsulate macromolecules inside vaults and developing strategies to seal them is an important step toward the use of vault protein cages as vessels for drug delivery.

There are several aspects that make vault particles useful as a therapeutic delivery system. 1) The particle has many of the properties thought to be advantageous for such a system. First, the particle's size (<100 nm) is small enough to prevent it from being trapped in the kidney and/or liver if administered intravenously. 2) The particle has a large interior space, large enough to encapsulate hundreds of proteins. 3) The protein shell of the vault offers some protection from external proteases. 4) Vaults appear to be biodegradable. Finally, vaults are nonimmunogenic.

In their review, the authors write that, "since proteins packaged into vaults through domain binding interactions appear to be reversibly associated with the particles, vaults seem most appropriate for applications where the slow release of proteins or peptides is desired. One particularly promising use of vaults has been to deliver an immune activating peptide intratumorally for the purpose of initiating antitumor immune responses in lung cancer."
Concluding their review, they point out that as a delivery system, the vault nanoparticle has incredible potential, yet only a few applications have thus far been investigated. In vitro applications, such as the use of vaults as delivery regents for biological materials, are likely to be the first commercial applications for the particle.
"In light of the variety and ease of vault engineering that can be anticipated, it is tempting to speculate a number of futuristic applications for the particle ranging from intracellular biological sensors to flexible nanomachine component parts. These flights of imagination are possible because of the elegant structure of the vault and the myriad of possibilities for engineering the particle using standard molecular biology techniques."