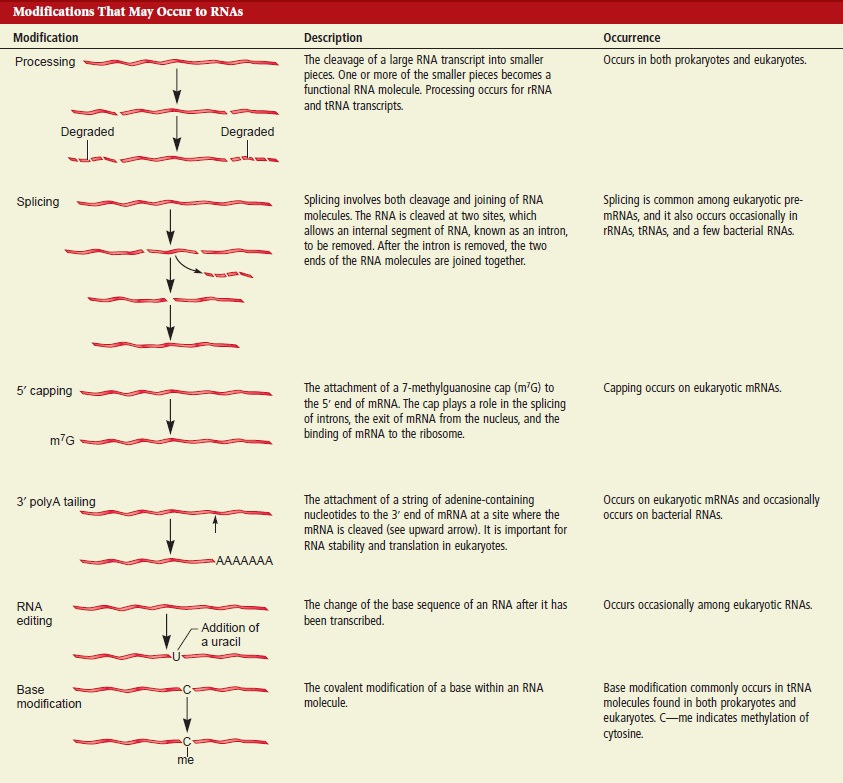 Genetic studies in yeast indicate that virtually every subunit of the core complex is essential – for viability and for pre-mRNA processing and polyadenylation in vitro and in vivo. 16

Most of the RNA found in our cells is built using our DNA genome as a template. In special cases, however, our cells also build RNA strands without a template. For instance, the end of (almost) every messenger RNA strand is composed of a long string of repeated adenosine nucleotides. These long poly(A) tails are not encoded in the genome. Instead, they are added after RNA polymerase finishes its normal process of transcription.

Its evident that this process and the instructions in order for this to happen after RNA polymerase finished its job,  had to be pre-programmed in DNA.

After RNA polymerase releases the RNA strand, other enzymes add the finishing touches, editing out introns, adding a cap to the front end, and building the long poly(A) tail at the other end. 5

Add the finishing touches, editing, adding , building the long poly (A) tail at the other end are highly ordered and precise processes. They could not have arisen without a intelligence actually instructing these sequenced and ordered proceedings, just by natural random processes.

A complex of over a dozen enzymes oversees the creation of a poly(A) tail on messenger RNA molecules.

Several special sequences at the end of the RNA recruit this complex to the proper place. Then the RNA strand is cleaved, and about 250 adenosine nucleotides are added to the new end. The enzyme poly(A) polymerase (PAP)  is responsible for the creation of the poly(A) tail. With the help of two magnesium ions, it binds to the messenger RNA and adds adenosine nucleotides one at a time to the end of the strand.

Recruit to the proper place, cleaving, adding...... are all organized precise processes like in a regular manufacturing process in factories. How did natural process find out that magnesium ions would be required for a binding process ??

The poly(A) tail plays several important roles in the function of messenger RNA molecules. With the help of poly(A)-binding protein , it protects the end of the RNA strand, shielding it from RNA-cutting nucleases. It also assists with the transport of the messenger RNA out of the nucleus through nuclear pores. Surprisingly, the poly(A) tail, which is at the end the messenger RNA, also stimulates the start of protein synthesis by helping to recruit translation initiation factors at the front end of the RNA. Some researchers actually think that poly(A)-binding protein links the RNA strand into a big circle. This could have a very useful consequence: since the beginning of the messenger RNA is so close to the end, ribosomes that have just finished making a protein could jump immediately to the beginning and start again.  5

The process of mRNA begins with transcription. Soon after RNA polymerase begins with transcription, a methylated cap is added to the 5" end. Transcription then ends to completion. Following completion, RNA polymerase releases the cap strand of mRNA. Specific nucleotide sequences in the mRNA are boung by  CstF: cleavage stimulation factor enzymes. The 3" end of the mRNA is then next moved into the right configuration for cleavage. Stabilizing factors are then added to the complex. Poly (A) polymerase now binds to the mRNA and cleaves the 3" end. The complex begins to disassociate, and the cleaved 3" end quickly degrades. Poly (A) polymerase now synthesizes the polyadenylated tail adenine to the tal. Additional proteins then add to the tail, increasing the rate at which it grows. When the tail reaches its full length, the poly (A) polymerase is signalled to stop , and the process is concluded. The processed mRNA is ready now to undergo splicing in preparation for translation.

Question: how could this extraordinarly machine like , highly precise and coordenated process  and its highly specific amazingly complex enzymes  come into existence,  considering that evolution was not a option, since it was present before the first self replicating cell existed ? Unless it was fully working with the core parts of the mechanism in place, it could not function, and the individual parts would have only function, after fully assembled , and the whole process coordenated and programmed, and all individual parts available ? My inference of the scientific evidence is, that only design is a rational explanation. Chance, or physical necessity, would be absolutely unable to encode all the information correctly, to make this mechanism work. 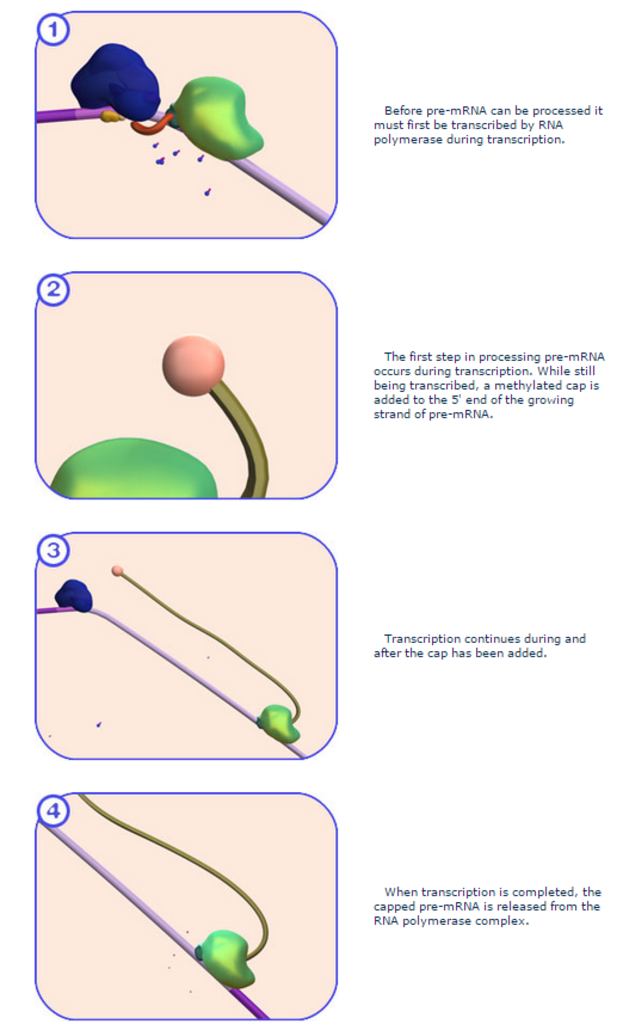 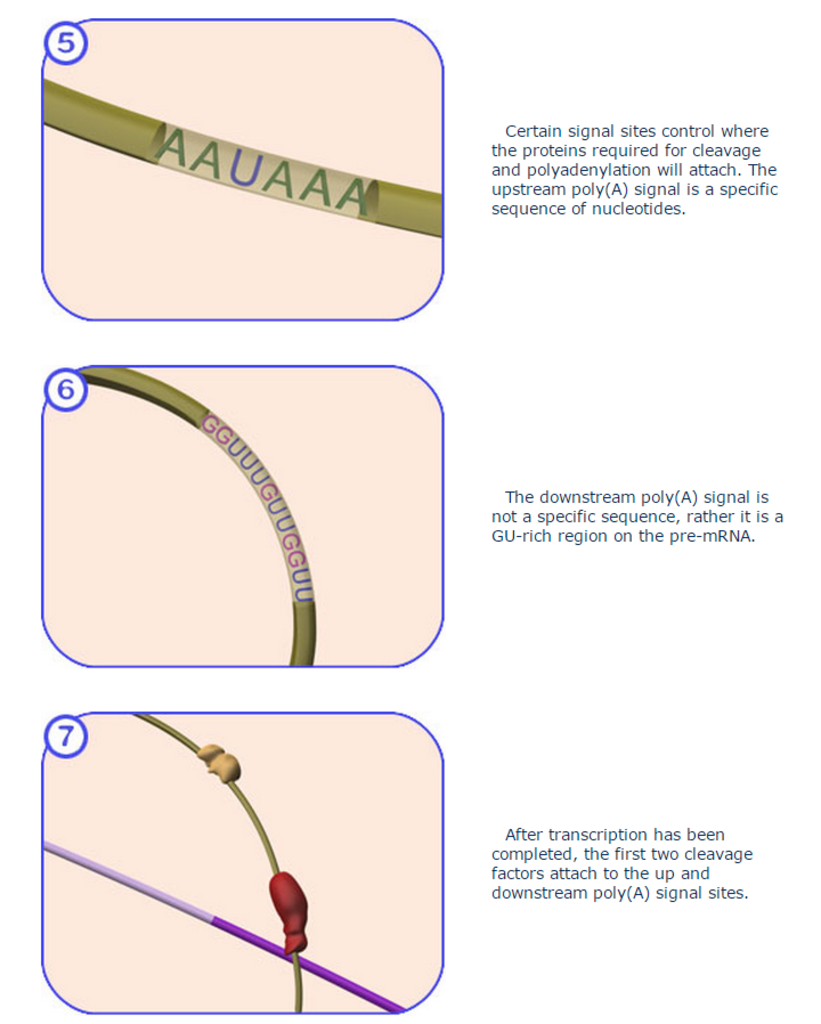 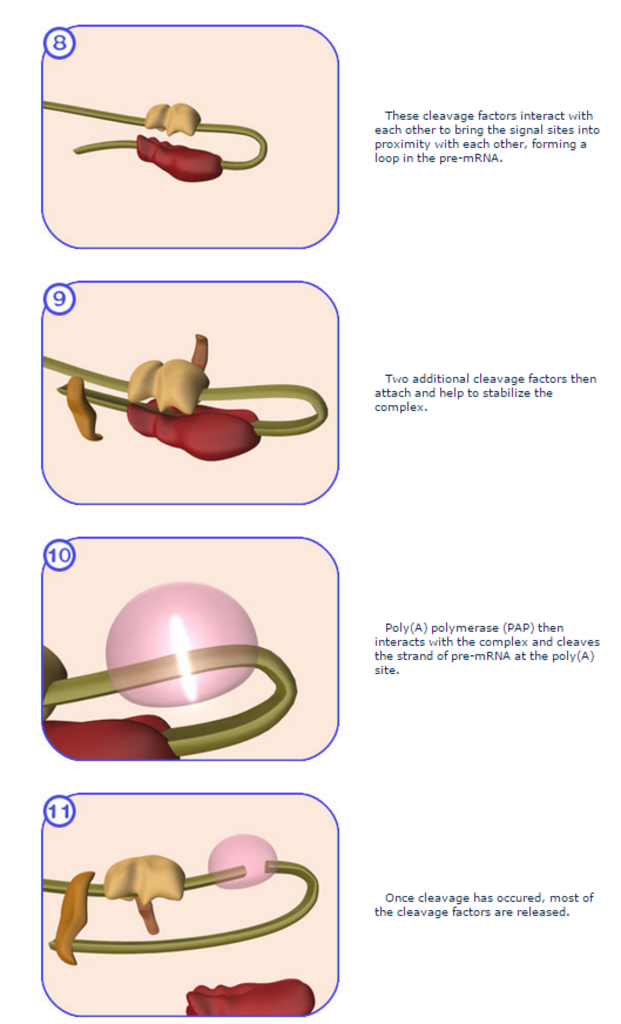 
following enzyme proteins are involved in the process:

"Adenine synthesis is perhaps the best example of an irreducibly complex system that can be found in life ..."
the process doesn't work unless all 11 enzymes are present. 1

This process could not have happened for the first time prior the first self replicating cell arose. So evolution is excluded. Remains chance, physical necessity, or both together. Or design......

in other words, it is a stretch of RNA that has only adenine bases. In eukaryotes, polyadenylation is part of the process that produces mature messenger RNA (mRNA) for translation. It, therefore, forms part of the larger process of gene expression.

The process of polyadenylation begins as the transcription of a gene finishes, or terminates.

This process had to be instructed in order to begin and terminate at the right time. How was this instruction encoded into the genome ? What mechanism was involved ?

The 3'-most segment of the newly made pre-mRNA is first cleaved off by a set of proteins;

These proteins had to be in place already...... How was the instruction encoded to make them functional, and put them into the right place to operate?

So its basically another part that is essential for life. No poly (A) tail, no export, translation, and stability of mRNA.


Here, a multi-protein complex (see components on the right) cleaves the 3'-most part of a newly produced RNA and polyadenylates the end produced by this cleavage. The cleavage is catalysed by the enzyme CPSF

A complex machinery is involved in these reactions including the cleavage/polyadenylation specificity factor (CPSF) and the cleavage stimulation factor (CstF). A subunit of CPSF, CPSF-73, has been shown to be the enzyme responsible for the cleavage reaction (Dominski et al. 2005). 2
The rate at which PAP adds adenine nucleotides is dependent on the presence of another regulatory protein, PABPII (poly-adenine binding protein II).
The final tail is about 200-250 adenine nucleotides long. 3

Cleavage and polyadenylation specificity factor (CPSF) is involved in the cleavage of the 3' signaling region from a newly synthesized pre-messenger RNA (pre-mRNA) molecule in the process of gene transcription. It is the first protein to bind to the signaling region near the cleavage site of the pre-mRNA, to which the poly(A) tail will be added by polynucleotide adenylyltransferase. The upstream signaling region has the canonical nucleotide sequence AAUAAA, which is highly conserved across the vast majority of pre-mRNAs. A second downstream signaling region, located on the portion of the pre-mRNA that is cleaved before polyadenylation, consists of a GU-rich region required for efficient processing.  13

Question : What is the best explanation for the arise of this complex enzyme , its synthesis, and  its reaction   prior replication could occur ? 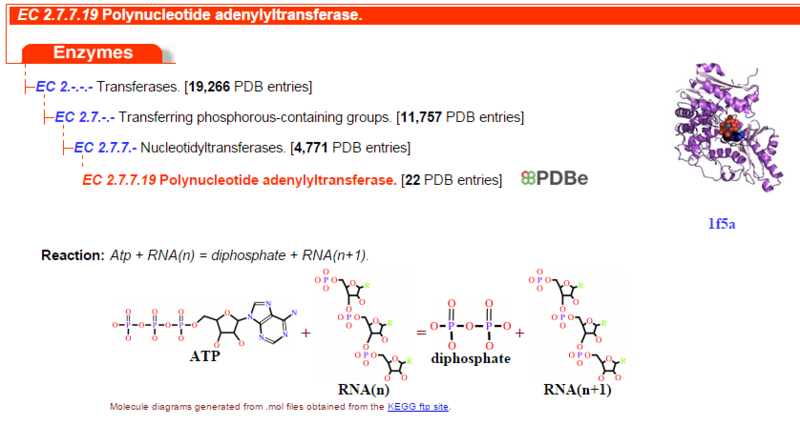 totalling about 200 kDa. It is involved in the cleavage of the 3' signaling region from a newly synthesized pre-messenger RNA (mRNA) molecule. CstF is recruited by cleavage and polyadenylation specificity factor (CPSF) and assembles into a protein complex on the 3' end to promote the synthesis of a functional polyadenine tail, which results in a mature mRNA molecule ready to be exported from the cell nucleus to the cytosol for translation. 4

Cleavage stimulation factor 50 kDa subunit is a protein that in humans is encoded by the CSTF1 gene.
This gene encodes one of three subunits which combine to form cleavage stimulation factor (CSTF). CSTF is involved in the polyadenylation and 3'end cleavage of pre-mRNAs. Similar to mammalian G protein beta subunits, this protein contains transducin-like repeats. Several transcript variants with different 5' UTR, but encoding the same protein, have been found for this gene.  14

Cleavage stimulation factor 64 kDa subunit is a protein that in humans is encoded by the CSTF2 gene.[1][2]
This gene encodes a nuclear protein with an RRM (RNA recognition motif) domain. The protein is a member of the cleavage stimulation factor (CSTF) complex that is involved in the 3' end cleavage and polyadenylation of pre-mRNAs. Specifically, this protein binds GU-rich elements within the 3'-untranslated region of mRNAs. 7 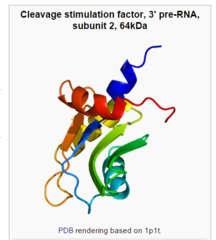 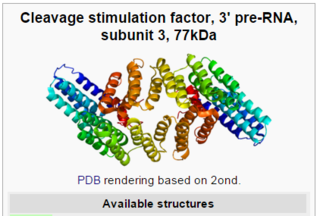 totalling about 200 kDa. It is involved in the cleavage of the 3' signaling region from a newly synthesized pre-messenger RNA (mRNA) molecule. CstF is recruited by cleavage and polyadenylation specificity factor (CPSF) and assembles into a protein complex on the 3' end to promote the synthesis of a functional polyadenine tail, which results in a mature mRNA molecule ready to be exported from the cell nucleus to the cytosol for translation.

Schematic representation of the structure of human CPSF-73. The beta-strands and alpha-helices are labelled, and the two zinc atoms in the activesite are shown as grey spheres. The sulphate ion is shown as a stick model. 9

Our studies provide the first direct experimental evidence that CPSF-73 is the pre-mRNA 3′-end-processing endonuclease. 10 ( Endonucleases are enzymes that cleave the phosphodiester bond within a polynucleotide chain. ) 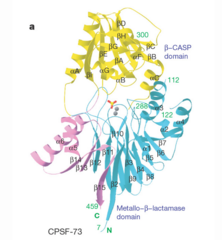 This enzyme is responsible for the addition of the 3' polyadenine tail to a newly synthesized pre-messenger RNA (pre-mRNA) molecule during the process of gene transcription. The protein is the final addition to a large protein complex that also contains smaller assemblies known as the cleavage and polyadenylation specificity factor (CPSF) and cleavage stimulatory factor (CtSF) and its binding is a necessary prerequisite to the cleavage of the 3' end of the pre-mRNA. After cleavage of the 3' signaling region that directs the assembly of the complex, PAP adds the polyadenine tail to the new 3' end.
The rate at which PAP adds adenine nucleotides is dependent on the presence of another regulatory protein, PABPII (poly-adenine binding protein II). The first few nucleotides added by PAP are added very slowly, but the short polyadenine tail is then bound by PABPII, which accelerates the rate of adenine addition by PAP. The final tail is about 200-250 adenine nucleotides long. PAP is phosphorylated by mitosis-promoting factor , a key regulator of the cell cycle. High phosphorylation levels decrease PAP activity. 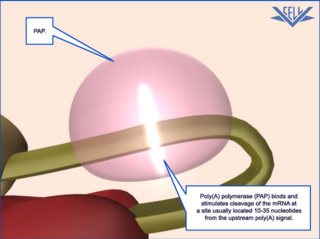 » The RNA polymerase enzyme and its function, evidence of design
» My articles