Proteasome:
1. The disposal of protein “trash” in the cell is the job of a complex machine called the proteasome.  What could be more low than trash collection?  Here also, sophisticated mechanisms work together.
2. PhysOrg described a new finding that shows that “two different mechanisms are required to determine which targets to destroy.” The “recognition tag” and “initiator tag.”
3. Both mechanisms have to be aligned properly to enter the machine’s disposal barrel.  “The proteasome can recognize different plugs1, but each one has to have the correct specific arrangement of prongs1,” said a researcher at Northwestern University.
4. This is another example of interdependent irreducible complex systems. One can’t argue for evolution; that first only one system existed.
5. The work of a designer is again obvious and all men call him God.
6. God most probably exists. 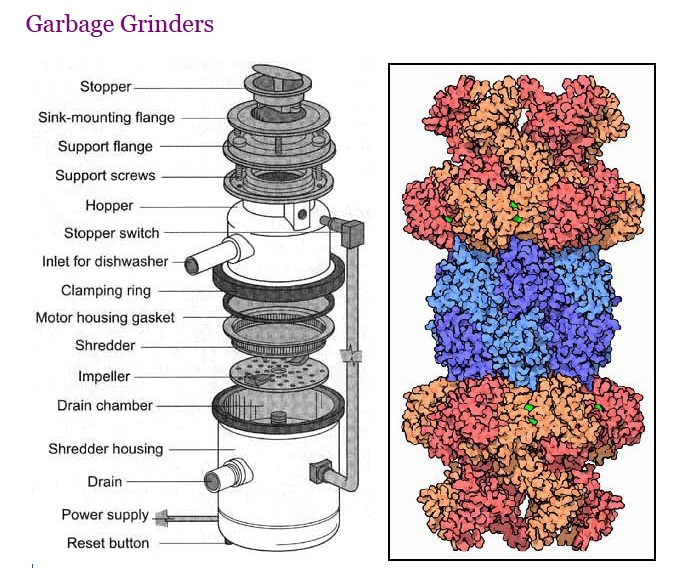 Once proteins are formed in the cell, there are circumstances in which they need to be destroyed, for example, if incorrectly formed or of no further use.  The cells have their own aggressive TSA agents ( Transportation Security Administration ) who spot and stamp such proteins with a ubiquitin molecule which alerts other transport systems that the protein needs to be scrapped.

http://www.nature.com/ncb/journal/v7/n8/full/ncb0805-725.html
Following the discovery of ubiquitin in the late 1970s and the delineation of the enzymology of the pathway, its regulatory potential for orchestrating complex cellular programmes was initially severely underestimated.


How did the first cell " know " that a recycle mechanism for damaged proteins would be useful ? How did it either evolve the garbage grinder, or how could it possibly have arisen by chance ( since it had to be present probably as a essential mechanism right in the beginning of  the first cell ? )

The proteosome :  This shredder has a twist-open lid which is activated by the unique combination of three destruction tags added to the errant protein.

Proteasomes are protein complexes inside all eukaryotes and archaea, and in some bacteria. In eukaryotes, they are located in the nucleus and the cytoplasm.The main function of the proteasome is to degrade unneeded or damaged proteins by proteolysis, a chemical reaction that breaks peptide bonds
Enzymes that carry out such reactions are called

A protease (also termed peptidase or proteinase) is any enzyme that performs proteolysis, that is, begins protein catabolism by hydrolysis of the peptide bonds that link amino acids together in the polypeptide chain forming the protein.

Proteasomes are part of a major mechanism by which cells regulate the concentration of particular proteins and degrade misfolded proteins. The degradation process yields peptides of about seven to eight amino acids long, which can then be further degraded into shorter amino acid sequences and used in synthesizing new proteins. Proteins are tagged for degradation with a small protein called ubiquitin.

How did ubiquitin arise ? What function would it have, if not fully inserted in the whole mechanism to do the job ?

The tagging reaction is catalyzed by enzymes called ubiquitin ligases

Once a protein is tagged with a single ubiquitin molecule, this is a signal to other ligases to attach additional ubiquitin molecules. The result is a polyubiquitin chain that is bound by the proteasome, allowing it to degrade the tagged protein.[2]

In structure, the proteasome is a cylindrical complex containing a "core" of four stacked rings forming a central pore.

How did this structure arise ? what survival advantage would there be for a unfinished structure ?

Each ring is composed of seven individual proteins. The inner two rings are made of seven β subunits that contain three to seven protease active sites. These sites are located on the interior surface of the rings, so that the target protein must enter the central pore before it is degraded. The outer two rings each contain seven α subunits whose function is to maintain a "gate" through which proteins enter the barrel.

How did the barrel shape arise ?


These α subunits are controlled by binding to "cap" structures or regulatory particles that recognize polyubiquitin tags attached to protein substrates and initiate the degradation process. The overall system of ubiquitination and proteasomal degradation is known as the ubiquitin-proteasome system.

The proteasomal degradation pathway is essential for many cellular processes, including the cell cycle, the regulation of gene expression, and responses to oxidative stress. The importance of proteolytic degradation inside cells and the role of ubiquitin in proteolytic pathways was acknowledged in the award of the 2004 Nobel Prize in Chemistry to Aaron Ciechanover, Avram Hershko and Irwin Rose.[3]

In the first step, a ubiquitin-activating enzyme (known as E1) hydrolyzes ATP and adenylylates a ubiquitin molecule.

Ubiquitin-activating enzymes, also known as E1 enzymes, catalyze the first step in the ubiquitination reaction, which (among other things) can target a protein for degradation via a proteasome. This covalent attachment of ubiquitin or ubiquitin-like proteins to targeted proteins is a major mechanism for regulating protein function in eukaryotic organisms.[2] Many processes such as cell division, immune responses and embryonic development are also regulated by post-transcriptional modification by ubiquitin and ubiquitin-like proteins.

In the last step, a member of a highly diverse class of enzymes known as ubiquitin ligases (E3) recognizes the specific protein to be ubiquitinated and catalyzes the transfer of ubiquitin from E2 to this target protein. A target protein must be labeled with at least four ubiquitin monomers (in the form of a polyubiquitin chain) before it is recognized by the proteasome lid.[35]

It is therefore the E3 that confers substrate specificity to this system.[36] The number of E1, E2, and E3 proteins expressed depends on the organism and cell type, but there are many different E3 enzymes present in humans, indicating that there is a huge number of targets for the ubiquitin proteasome system.

It seems to me that this system could not arise by small subsequent steps, and shows all signs of being intelligently designed.

Like other energy-dependent proteases, proteasomes, which are found across the three domains of life, are self-compartmentalized and important in the early steps of proteolysis. Proteasomes degrade improperly synthesized, damaged or misfolded proteins and hydrolyse regulatory proteins that must be specifically removed or cleaved for cell signaling. In eukaryotes, proteins are typically targeted for proteasome-mediated destruction through polyubiquitylation, although ubiquitin-independent pathways also exist. Interestingly, actinobacteria and archaea also covalently attach small proteins (prokaryotic ubiquitin-like protein (Pup) and small archaeal modifier proteins (Samps), respectively) to certain proteins, and this may serve to target the modified proteins for degradation by proteasomes. 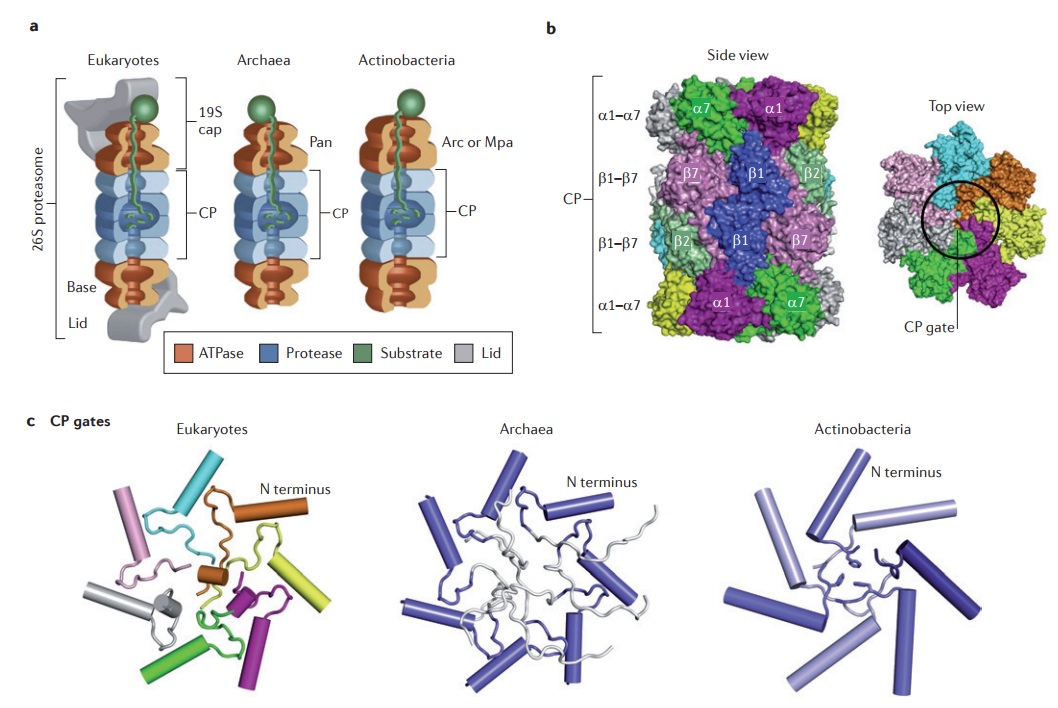 Basic structures of proteasomes across domains of life.
a | All proteasomes are composed of a 20S catalytic core particle (CP) formed from four stacked heptameric rings of α- and β-subunits. The CPs can associate with AAA+ ATPases, which unfold and translocate substrate proteins into the CP by an ATP-dependent mechanism. In eukaryotes (using yeast as an example), six different ATPase subunits (Rpt1–Rpt6) form the hexameric ring of the 19S cap, which associates with CPs to form 26S proteasomes. The 19S cap can be separated into base and lid subcomplexes, with the base harbouring the Rpt1–Rpt6 subunits (which use ATP to fuel CP-mediated degradation of folded proteins), and the lid including the deubiquitylating enzyme Rpn11. The proteasomal AAA+ proteins of archaea (proteasomeactivating nucleotidase (Pan)) and of actinobacteria (AAA+ ATPase forming a ring-shaped complex (Arc) or mycobacterial proteasome ATPase (Mpa)) assemble into homohexameric rings and associate with CPs in vitro, but the evidence that these ATPases interact with their cognate CPs in vivo is limited. b | Side and top views of a yeast CP provide a perspective on the basic CP structure. c | Across the domains of life, the α-subunit amino-terminal tails that gate the openings of CPs differ in the extent to which they seal the CP channel from substrate entry. Eukaryotic CPs are gated primarily by the well-ordered N-terminal tails of α2, α3 and α4 subunits, which form numerous hydrogen bonds and van der Waals contacts. Gates of archaeal CPs (Thermoplasma acidophlium CPs synthesized in recombinant Escherichia coli) are disordered (residues in white are highly mobile). In actinobacterial CPs, the seven α-subunits are identical but can adopt three different conformations at their N termini (indicated by different shading) to form an ordered closed gate. 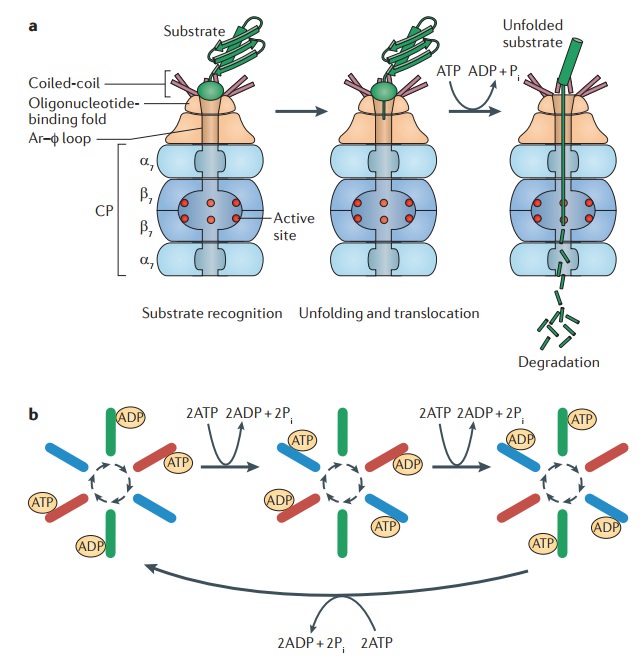 Ordered reaction cycle in protein degradation by proteasomes.
a | Model of proteolysis based on archaeal proteasome-activating nucleotidase (Pan) and core particle (CP) complexes. The amino-terminal coiled-coil domain of each Pan subunit forms a pair with one of its neighbours. The three tentacle-like coiled-coil pairs protrude from the ATPase face most distal to the CP and surround a pore formed by an oligonucleotidebinding fold, which may serve as an entry point for substrate proteins to traverse into the ATPase channel. An aromatic–hydrophobic (Ar–φ) loop within the narrowest region of the ATPase channel may grip and pull down on substrate proteins, a process driven by ATP hydrolysis. Protein unfolding is thought to occur from these repetitive power strokes, with the oligonucleotide-binding fold providing a rigid platform and narrow opening to stimulate this unfolding. Unfolded protein substrates are translocated through the ATPase channel to the CP for degradation. b | Proteasomal ATPases seem to function as para-subunit pairs in ATP binding, ATP hydrolysis and ADP release during protein unfolding and docking to the CP. ATP binding to a para-subunit pair (red) induces conformational changes in adjacent subunit pairs, so that the clockwise pair (blue) becomes nucleotide free and the anticlockwise pair (green) becomes bound to ADP. Following ATP hydrolysis, the ATP-bound partners (red) are converted to an ADP-bound state, thus simulating the clockwise pair to bind ATP and the anticlockwise pair to release ADP. Thus, an ordered reaction cycle is perpetuated with coordinated conformational changes in para-subunit pairs, probably providing the power strokes for pulling and unfolding the substrates. At any given time, only a subset of the carboxy-terminal HbYX motifs in the ATPase (those in para-subunits bound to ATP) may be extended to open the CP gates. Pi , inorganic phosphate. 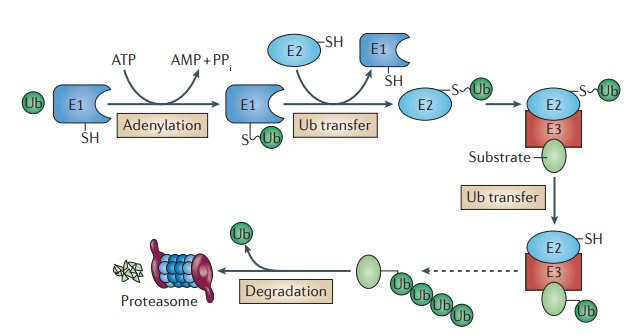 Ubiquitylation as a signal for degradation.
Ubiquitylation is a common signal for eukaryotic 26S proteasomes and involves a cascade of E1 ubiquitin-activating, E2 ubiquitin-conjugating and E3 ubiquitin ligase enzymes. In this cascade, E1 (plus ATP) first adenylates the carboxy-terminal carboxylate of ubiquitin (Ub), forming Ub–AMP, and then forms a Ub thioester intermediate (E1–Ub). Ubiquitin is transferred from E1 to E2, and then to the protein target with assistance from E3 (although ubiquitylation without E3 can occur118). Typically, an isopeptide bond is formed between the ubiquitin C-terminal carboxylate and the ε-amino group of a Lys side chain of the substrate protein or the growing ubiquitin chain (Lys48-linked ubiquitin chains are common signals for 26S proteasomes). Deubiquitylating enzymes within 26S proteasomes release and recycle ubiquitin during substrate protein degradation. PPi , inorganic pyrophosphate.