Evidence of the resurrection

Titus Flavius Josephus, Roman secular historian form the 1st century writes in Antiquities of the Jews, XVIII:
3. Now there was about this time Jesus, a wise man, if it be lawful to call him a man; for he was a doer of wonderful works, a teacher of such men as receive the truth with pleasure. He drew over to him both many of the Jews and many of the Gentiles. He was [the] Christ. And when Pilate, at the suggestion of the principal men amongst us, had condemned him to the cross, (9) those that loved him at the first did not forsake him; for he appeared to them alive again the third day; (10) as the divine prophets had foretold these and ten thousand other wonderful things concerning him. And the tribe of Christians, so named from him, are not extinct at this day.

For two thousand years the historicity of Christ's crucifixion and resurrection has been challenged on many grounds. But no one has ever produced evidence of the kind that brought President Nixon down—“a smoking gun,” that is, evidence that could contradict the biblical account. Is that not evidence of its veracity? Can you think of any other event in history that has been so thoroughly examined, has not been disproved, and yet some still disbelieve it? The consistent eyewitness testimony of the apostles and earliest believers to the reality of Jesus' bodily resurrection, given among those hostile to the claims of Jesus, clearly points to the resurrection as a historical reality.
Chuck Colson (from, The Faith: What Christians Believe, Why They Believe It, and Why It Matters)

The disciples had nothing to gain by lying and starting a new religion. They faced hardship, ridicule, hostility, and martyr's deaths. In light of this, they could never have sustained such unwavering motivation if they knew what they were preaching was a lie. The disciples were not fools and Paul was a cool-headed intellectual of the first rank. There would have been several opportunities over three to four decades of ministry to reconsider and renounce a lie. - J.P. Moreland

The real issue of the resurrection deals with its evidence. This evidence consists of the testimony of many people who stated that they had seen Jesus after His crucifixion and death. The same people who testified of the resurrection of Christ also gave up their social and economic security and put their lives on the line in order proclaim that Jesus had risen. Does it make any sense at all to say that they knew Jesus did not rise from the dead and had concocted an elaborate plan in order to deceive a great many people into believing that Jesus had risen? Why would they do that?  Does it also make any sense that they would continue in this lie while being persecuted, ostracized from family and friends, beaten, imprisoned, and finally killed for what they believed?  It makes more sense to believe that their actions were consistent with their teaching. In other words, they taught about self-sacrifice, dedication to truth, love, peace, etc., and they based it all on the risen Lord.  It was based upon the truth that they had seen.

“The Gospels were written in such temporal and geographical proximity to the events they record that it would have been almost impossible to fabricate events. Anyone who cared to could have checked out the accuracy of what they reported. The fact that the disciples were able to proclaim the resurrection in Jerusalem in the face of their enemies a few weeks after the crucifixion shows that what they proclaimed was true, for they could never have proclaimed the resurrection under such circumstances had it not occurred.

The Gospels could not have been corrupted without a great outcry on the part of orthodox Christians. Against the idea that there could have been a deliberate falsifying of the text, no one could have corrupted all the manuscripts. Moreover, there is no precise time when the falsification could have occurred, since, as we have seen, the New Testament books are cited by the church fathers in regular and close succession. The text could not have been falsified before all external testimony, since then the apostles were still alive and could repudiate any such tampering with the Gospels.

The miracles of Jesus were witnessed by hundreds of people, friends and enemies alike; that the apostles had the ability to testify accurately to what they saw; that the apostles were of such doubtless honesty and sincerity as to place them above suspicion of fraud; that the apostles, though of low estate, nevertheless had comfort and life itself to lose in proclaiming the gospel; and that the events to which they testified took place in the civilized part of the world under the Roman Empire, in Jerusalem, the capital city of the Jewish nation. Thus, there is no reason to doubt the apostles’ testimony concerning the miracles and resurrection of Jesus. It would have been impossible for so many to conspire together to perpetrate such a hoax. And what was there to gain by lying? They could expect neither honor, nor wealth, nor worldly profit, nor fame, nor even the successful propagation of their doctrine. Moreover, they had been raised in a religion that was vastly different from the one they preached. Especially foreign to them was the idea of the death and resurrection of the Jewish Messiah. This militates against their concocting this idea. The Jewish laws against deceit and false testimony were very severe, which fact would act as a deterrent to fraud.

Suppose that no resurrection or miracles occurred: how then could a dozen men, poor, coarse, and apprehensive, turn the world upside down? If Jesus did not rise from the dead, declares Ditton, then either we must believe that a small, unlearned band of deceivers overcame the powers of the world and preached an incredible doctrine over the face of the whole earth, which in turn received this fiction as the sacred truth of God; or else, if they were not deceivers, but enthusiasts, we must believe that these extremists, carried along by the impetus of extravagant fancy, managed to spread a falsity that not only common folk, but statesmen and philosophers as well, embraced as the sober truth. Because such a scenario is simply unbelievable, the message of the apostles, which gave birth to Christianity, must be true.

Belief in Jesus’ resurrection flourished in the very city where Jesus had been publicly crucified. If the people of Jerusalem thought that Jesus’ body was in the tomb, few would have been prepared to believe such nonsense as that Jesus had been raised from the dead. And, even if they had so believed, the Jewish authorities would have exposed the whole affair simply by pointing to Jesus’ tomb or perhaps even exhuming the body as decisive proof that Jesus had not been raised.

If you can disprove Jesus' resurrection, you will single-handedly be responsible for destroying Christianity.
Craig Hazen

Some atheists have suggested that the disciples, during the decades following His death, simply invented their accounts of Jesus. These Bible critics say that the disciples, in an attempt to enhance His authority, then published the story that Jesus claimed to be God and was resurrected. Any fair-minded reader should consider the historical evidence.

First, the apostles were continually threatened and pressured to deny their Lord during their ministry; especially as they faced torture and martyrdom. However, none of these men who spent time with Jesus chose to save their lives by denying their faith in Him. 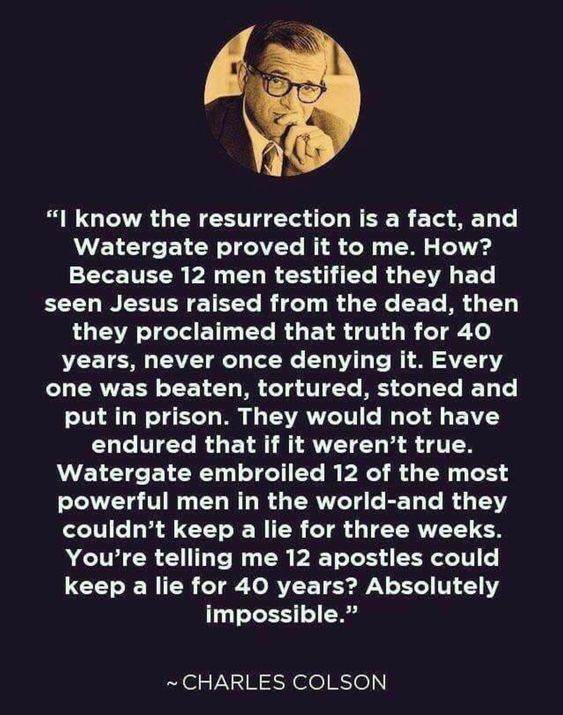 The Resurrection of Christ-Alternative explanations fail!

0
What about some of the more recent attempts to explain away Christ’s resurrection?  Were the resurrection accounts legends that grew up around an ordinary man?  Did He not really die on the cross, as put forth in the book The Jesus Papers?  Was the tomb of Jesus actually found?

Let’s look at the facts:
Not legends

The Jesus Papers: This was a popular book by Michael Baigent that claimed Jesus never died but was somehow resuscitated after being crucified. This idea is a worn–out theory that should have been buried long ago.

The Jesus tomb: There was a tomb, an ossuary or “bone box,” found  in Jerusalem in 1980 which reportedly had the names of a Joseph, Mary, Mariamne Mara (whom they took for Mary Magdalene) and a “Jesus son of Joseph.”A film documentary was made in 2007 by James Cameron and Simcha Jacobovici suggesting it was the family tomb of Jesus. But practically no serious scholars give this idea any credibility because:

Again, “natural” explanations for the events of the resurrection require greater faith to believe than the resurrection itself; thus, the resurrection is as sure a fact as any history can be. And this is the fact Jesus used to prove He is who He claims to be, and so it follows that what He says about the authority of Scripture is absolutely true.

Re: Evidence of the resurrection

» The Impossible Faith: A Defense of the Resurrection
» The shroud of Turin EXTRAORDINARY evidence of Christ's resurrection