Defending the Christian Worldview, Creationism, and Intelligent Design » Astronomy & Cosmology and God » Is the universe built like a clock, or a machine?

Is the universe built like a clock, or a machine?

The term “cosmos” is an anglicized form of the Greek kosmos, denoting that which is characterized by “orderly arrangement.” 1

Dr. Arthur M. Harding: Prof. of Mathematics and Astronomy: The Splendor of the Heavens Brought Down to Earth.
“As we look at the machines in some of our factories we sometimes wonder at what the mind of man has created, overlooking the fact that we are living on a little world that is a part of a gigantic machine which is operating silently and everlastingly in the sky .... Surely here is a gigantic machine which makes us stand in awe and wonder at the power of the creator who could design such a machine and put it into operation” (67; emphasis added).

The earth is moving in its 600 million mile orbit around the sun at the speed of more than 1,000 miles per minute. One writer notes:
“Since the earliest astronomical observations, thousands of years ago, the length of the rotation, or revolution, has not varied by the thousandth part of a second” (Price, 134).
The earth’s rotation upon its axis appears to be slowing slightly. This might well be expected in view of the effect of the Second Law of Thermodynamics, which suggests that a running-down process is characteristic of the entire universe.

However, this decrease is so minute that the length of a day will not be altered more than a fraction of a second in centuries. Dr. Harding notes:
“The human brain has not been able to devise any mechanical means for keeping time which can compete with the rotation of the earth on its axis” (p. 17).
As the earth travels in its orbit around the sun, it must make minute adjustments to conform to its elliptical “track.” Our planet digresses from a straight line one-ninth of an inch every eighteen miles. If the turn was only a tenth of an inch, our globe would be too cold for life. If the adjustment was as much as an eighth of an inch, the earth’s surface would be a blazing oven (Science Digest, 124). What precision!

Dr. Robert Jastrow: God and the Astronomers
“For Einstein, the existence of God was proven by the laws of nature; that is, the fact that there was order in the Universe and man could discover it. When Einstein came to New York in 1921 a rabbi sent him a telegram asking, ‘Do you believe in God?’ and Einstein replied, ‘I believe in Spinoza’s God, who reveals himself in the orderly harmony of what exists.’” (28; emphasis added).

Isaac Newton: General Scholium to the Principia (1726)
[The Lord God] is eternal and infinite, omnipotent and omniscient, that is, he endures from eternity to eternity, and he is present from infinity to infinity; he rules all things, and he knows all things that happen or can happen.
Robert Boyle uses the clockwork metaphor to argue for both divine transcendence and the radical contingency of creation. 8

Clockwork universe 4
In the history of science, the clockwork universe compares the universe to a mechanical clock. It continues ticking along, as a perfect machine, with its gears governed by the laws of physics, making every aspect of the machine predictable.

Newtons discoveries became the basis for a detailed and comprehensive study of mechanics (the study of force and motion). The upshot of all this was a mechanical world-view that regarded the Universe as something that unfolded according to mathematical laws with all the precision and inevitability of a well-made clock. The detailed character of the Newtonian laws was such that once this majestic clockwork had been set in motion, its future development was, in principle, entirely predictable. This property of Newtonian mechanics is called determinism.

Robbert Dijkgraaf: There Are No Laws of Physics. There’s Only the Landscape. June 4, 2018 3
Did nature have any choice in picking its fundamental laws? Albert Einstein famously believed that, given some general principles, there is essentially a unique way to construct a consistent, functioning universe. In Einstein’s view, if we probed the essence of physics deeply enough, there would be one and only one way in which all the components — matter, radiation, forces, space and time — would fit together to make reality work, just as the gears, springs, dials and wheels of a mechanical clock uniquely combine to keep time.

There is a clockwork mechanism. What is the winding key? 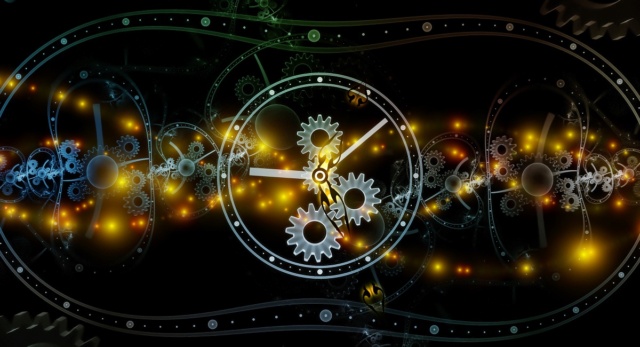 Defending the Christian Worldview, Creationism, and Intelligent Design » Astronomy & Cosmology and God » Is the universe built like a clock, or a machine?

» The seven day Circadian Rhythms: "Nature's Intricate Clockwork"
» Evidence of Design in Mathematics
» Existence of the universe. The universe had a beginning, therefore a cause
» Were the Pyramids Built Before the Flood? (Masoretic Text vs. Original Hebrew)
» Archean Pilus machine