The other theory of mathematics, the one which I happen to favour because it doesn’t require such icky occultic philosophical entities, is the idea that mathematics is a human creation. Just like how we invented chess, likewise did we humans invent mathematics. But even though chess and mathematics is our invention, but once invented it has a reality independent of our subjectivity. Thus, for example, it is an objectively true fact that one is able to checkmate in a number of moves, or one is forced to make a certain move to get out of a check, etc. The analogy which Karl Popper used is that of a spider spinning a web. The spider made the web, but once the web was made, it has an objective reality of its own, it is of a certain biochemistry, of a certain pattern, structure in order to retain its integrity, etc.

The naturalistic explanation only explains how we came to create those mental constructs which are able to represent the universe, but it doesn’t explain why does nature itself possess those cognitive resonating and conformity to mind-like orders in the first place.

Perhaps the most convincing evidence that the world was expressly designed to conform to simple laws that man would readily discover is furnished by the universal law of gravitation: F= Gm[1]m[2]/r^2. Notice the exponent 2. Why is it not 1.9999999 . . ., or 4.3785264 . . ., or something else hard to use in computations? Yet research has been able to specify the exponent as far as the first six digits, giving 2.00000. Thus, so far as we can tell, the exponent is exactly 2. Coulomb's law of electric force is similar: F = kq[1]q[2]/r^2. In this case, research has established that the exponent is no different from exactly 2 as far as the first 17 digits. Would we find such laws in an accidental universe?

Matter-antimatter pair production ratio 1 in 10 billion of “leftover particles” happens to be the exact amount of mass necessary for the formation of stars, galaxies, and planets. The number of electrons (in the universe) is equivalent to the number of protons to an accuracy of one part in 10 to the 37th power. If it were not so, galaxies, stars, and planets would never form. 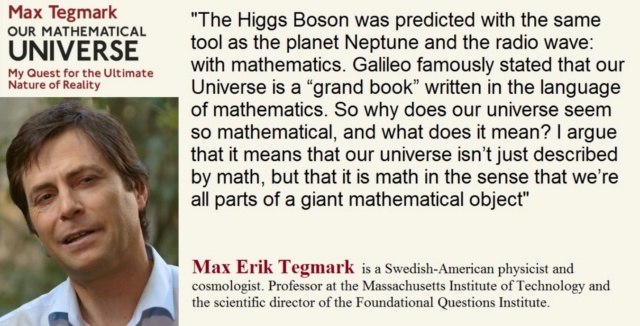 Admin
Posts : 6079
Join date : 2009-08-09
Age : 54
Location : Aracaju brazil
God created the rules under which our universe exists and operates. These include math and physics.

Once these rules were set the rest is, wait for it, history.

let us consider a few historical examples to illustrate what it means for the physical world to be a mathematical structure: