Defending the Christian Worlview, Creationism, and Intelligent Design » Molecular biology of the cell » Metabolism » What emerged first, anabolism, or catabolism ?

What emerged first, anabolism, or catabolism ?

Most biologists learn about how cells function but rarely question why things are the way they are. They are satisfied when they understand how things work, and with the usual explanations provided by scientific consensus, and leave it that way. For most, chemical evolution, followed by biological evolution, explain how things came to be, and what is not yet understood, science one day will find the answers, to close the gaps of understanding. Nothing, that seemingly is worth to consider seriously and honestly, a wider paradigm shift.  When this way of thinking is challenged by opposing views, like intelligent design, a spontaneous reaction often is to block, enter into defense mode, and rather than examining the reasons behind different views, try to defend what is already taken and accepted as true. I see this often happening, when evolution is challenged:  rather than actually examining the inferences,  simply make a quick search on the web, there will be no difficulty to find scientific papers that promote evolution, since it is THE explanation that science provides, and post the link, and think that settles it - not !!

Science has no conclusive answers but assumes naturalistic explanations a priori. The philosophical framework upon which modern science relies is compromised in regards of origins since design is excluded a priori. And considerable efforts are spent to avoid teleology, despite the fact that everything in biology has a reason to be. Not rarely, when a new molecular function is discovered, which does not demonstrate why the function or molecular machine is there, the first question a researcher makes, is: " What is it for, what is its function? Why is it there ?". That is teleology. There is a goal, reason, or function, but it must have emerged by unguided ecological pressures and fitness. The contradiction is there but hidden. " It looks designed, but is not designed for purpose".

Why is there catabolism, AND anabolism? Nature magazine claims that:

" Cells are expert recyclers. They disassemble large molecules into simpler building blocks and then use those building blocks to create the new components they require. "

Teleology right there. Cells would have to be conscient to be "experts". Of course, they will argue that it is just a way of saying.  According to Wiki, " An expert is someone who has a prolonged or intense experience through practice and education in a particular field. ".  Experience is from experiencing, practice and education are all related to conscience and intelligence. But biological Cells are none of those things. Recycling is the process of converting waste materials into new materials and objects. This is a goal-oriented process which has to do with economy and efficiency. Why would dead matter care about that? Dead matter just behaves and is subject to external random natural forces and physical laws like thermodynamics, and getting to a resting state.

Cells must balance their catabolic and anabolic pathways in order to control their levels of critical metabolites — those molecules created by enzymatic activity — and ensure that sufficient energy is available. All bioenergetic systems are highly refined. The problem here is: There were no complex organic molecules on early earth to be broken down. Why would chemical evolution produce catabolic pathways without anything to break down? Secular science papers avoid asking such questions because science based on methodological naturalism has no answer to such questions. No energy in form of ATP, and there would be no life. But ATP is made by enzymes, which require energy through ATP to be made. An endless vicious circle, or catch22 - chicken and egg problem.

The anabolic pathway for synthesis of a given end product usually does not match precisely the pathway used for catabolism of the same substance. Different enzymatic reactions and unique metabolites characterize other steps. A classic example is the glycolytic pathway from glucose to pyruvate which consists of 10 enzymes. Although it may seem efficient for glucose synthesis from pyruvate to proceed by a reversal of all 10 steps, gluconeogenesis uses only seven of the glycolytic enzymes in reverse, replacing those remaining with four enzymes specific to glucose biosynthesis.

Question: How could that setup have arisen gradually, not even by biological, but chemical evolution, if both ways, forward and reverse, anabolic, and catabolic metabolism is required for propper metabolites balance?

There is a further layer of complexity, when we consider, that different pathway serving in opposite metabolic directions are independently regulated.

Not only has the origin of the two opposing pathways to be explained but also how they became regulated independently.  That seems to me far-fetched to be achieved by prebiotic molecules lying around on early earth without the goal to turn themselves alive.

The direction in which they operate is determined by allosteric effectors acting on key steps in the opposing pathways.

So, if certain enzymes in the pathway were not equipped with allosteric effectors, no regulation of which way had to be given preference, anabolism, or catabolism, would be possible. Which means, no possibility of adaptation - no life !! Allosteric effectors in the pathway are IRREDUCIBLE - one more of many parts that had to be there, right from the beginning, fully set up and function, for life to start its replication cycles, and we be here to appreciate these amazing feats.

Not only do cells need to balance catabolic and anabolic pathways, but they must also monitor the needs and surpluses of all their different metabolic pathways. There are, for example, extremely complex pathways to control and maintain the right amount of deoxyribonucleotides in the Cell. If supply is short, the right gene sequences in Cells cannot be synthesized, and an increase of mutations and cell death would be the result. Cells "know how" metabolic needs can be served in an immediate and orderly fashion.

Could there have been a goal of basic building blocks of life to chemically evolve into complex systems that:

- produce energy through ATP, used in all biological functions in the Cell?
- balance their anabolic and catabolic pathways?
- monitor the needs and surpluses?
- use enzymes that can either activate or shut up a particular pathway, as a response to a particular change in concentrations of key metabolites?
- use feedback loops, where the products of a metabolic pathway actually serve as inhibitors of their own synthesis?
- manage biochemical reactions with enzymes which is an important part of cellular maintenance?  The enzymatic activity allows a cell to respond to changing environmental demands and regulate its metabolic pathways, both of which are essential to cell survival?

Could there have been a goal of basic building blocks of life to chemically evolve into compartmentalization to avoid interference?

It has become increasingly accepted over the last 30 years that the first forms of life were likely chemoautotrophic, deriving all biomass components from carbon dioxide CO2, and all energy from inorganic redox couples in the environment. (Photoautotrophs, in contrast, derive energy from sunlight, while heterotrophs derive energy and biomass from organic sources of carbon.)

Nature magazine claims that:
" all organisms on Earth today originated from a single cell that existed some 3.5 to 3.8 billion years ago. This original cell was likely little more than a sac of small organic molecules and RNA-like material that had both informational and catalytic functions. Over time, the more stable DNA molecule evolved to take over the information storage function, whereas proteins, with a greater variety of structures than nucleic acids, took over the catalytic functions. "

This claim can be put to rest as science fiction at its best. 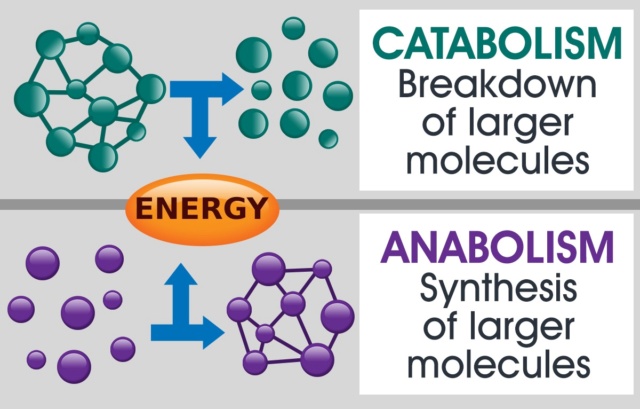 Defending the Christian Worlview, Creationism, and Intelligent Design » Molecular biology of the cell » Metabolism » What emerged first, anabolism, or catabolism ?